Yazoo City, Gateway to the Mississippi Delta, and Satartia, Mississippi 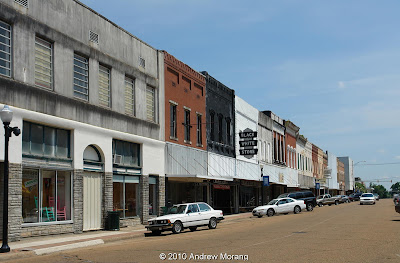 Yazoo City, the Gateway to the Delta, is situated at the transition of the two main landforms that make up Mississippi's geomorphology, the loess bluffs in the east and the flat alluvial Delta to the west. It is still the county seat of Yazoo County and is located on the banks of the Yazoo River about 40 miles northwest of Jackson. It is only about a hour's drive from Vicksburg along Highway 3, which follows the edge of the loess hills. 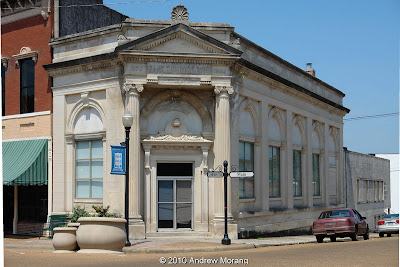 Yazoo City must have once been prosperous because the central business core has blocks of early 20th century commercial buildings. But it is quiet now; History Channel could have filmed an episode of Life After People here. Looking down Main Street, I can almost imagine it crowded with merchants and shoppers in a previous era. The limestone-clad Bank of Yazoo City (1876-1904) has the solid and reassuring facade that was supposed to make patrons trust the institution's solidity. Clearly it was built in an era of optimism and wealth.Why has the optimism disappeared from thousands of small American towns like this? How have we destroyed our society? 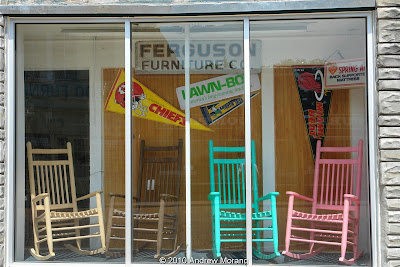 There are still a few going concerns on Main Street, but not many. Oddly, the city set up loudspeakers on the light poles which play jazz to the lonely sidewalks. 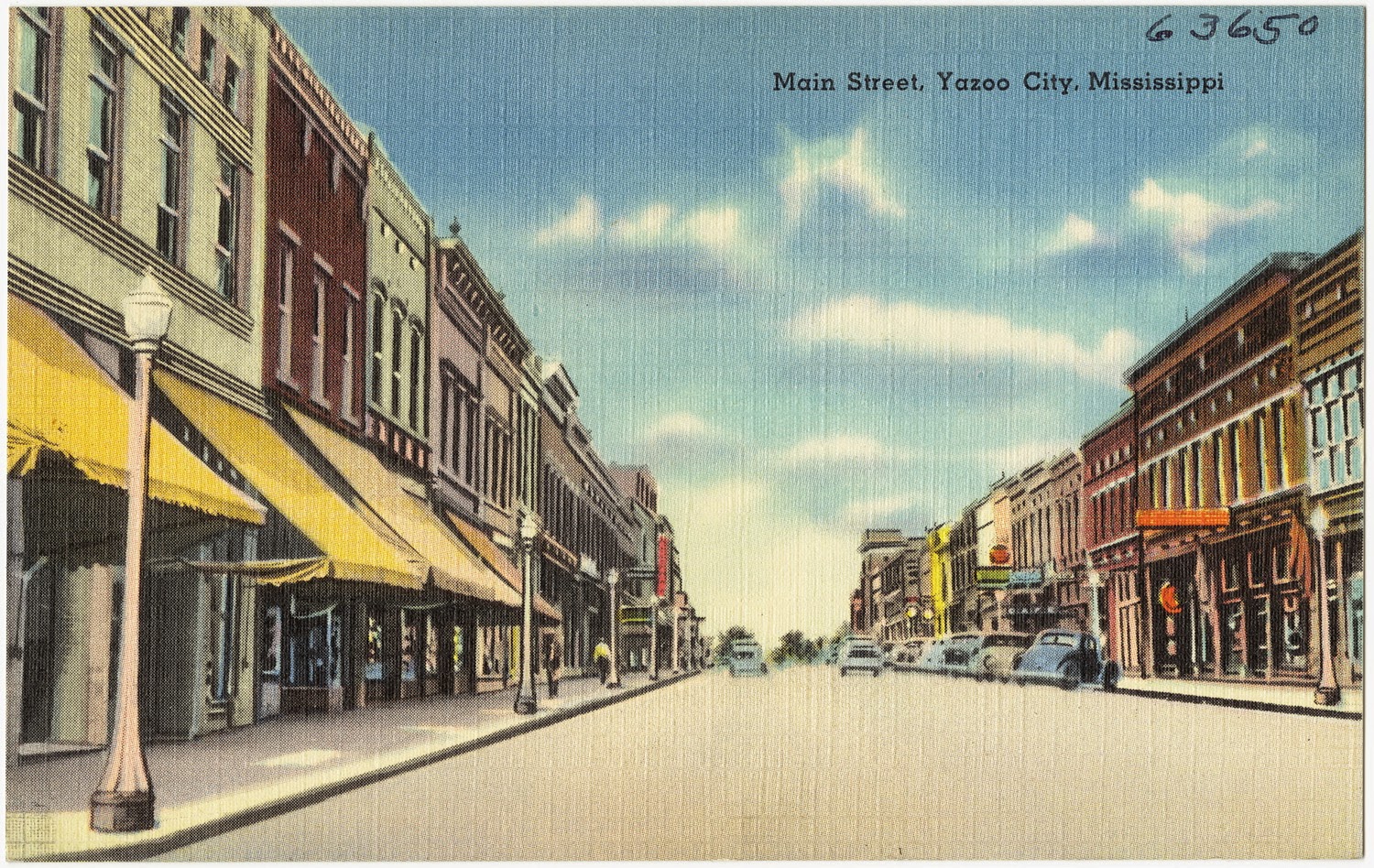 Update August 20, 2014: This is an undated post card of Main Street, from the Tichnor Collection at the Boston Public Library. 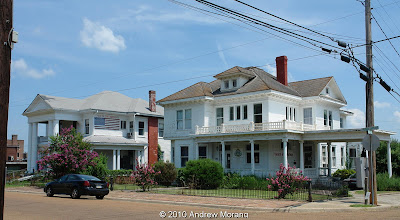 The elegant wood mansions on Jefferson Street resemble similar examples throughout the mid-west. I recall Indianapolis having hundreds of magnificent houses like this. 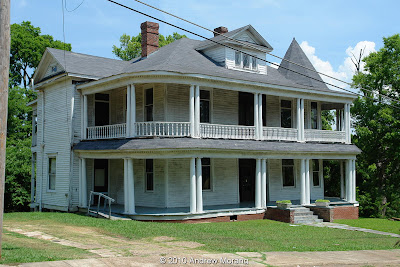 The house in the photograph above is the Oakes African American Cultural Center at 312 West Monroe Street. It is on the Mississippi Heritage Trust's 2009 list of most endangered historic places. 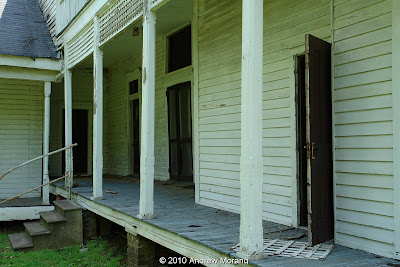 The owners may have done some work recently to preserve the structure, but in 2009, the Heritage Trust was concerned about it's survival:

"In 1884, their son, A.J., founded Oakes Academy, a private school for blacks, and served as principal for the next 16 years. He resigned in 1900 to work full-time for the Oakes Lumber Company and his construction company, which helped rebuild Yazoo City after a 1904 fire destroyed much of the town. The fire did not reach his company, nor did it climb the hill to the Oakes House, thus allowing it to remain in its original state. By 1930, the one-room structure had grown to a two-story home with Colonial Revival detailing, including a wrap-around two-story gallery supported by Tuscan columns.

Currently the Oakes House is being used as a museum that not only tells the history of the Oakes family, but it also tells of the struggles and triumphs of African Americans in Yazoo County and the State of Mississippi. In the 1990's, an intense project helped restore the leaded-glass entrance doors, original mantels, chimneys, walls, and stairs." 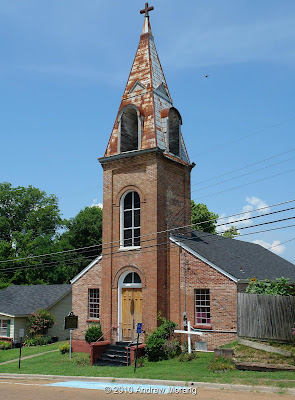 The Bethel AME church, also on South Monroe, is a fine example of church architecture. 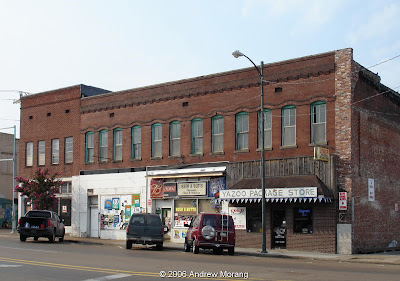 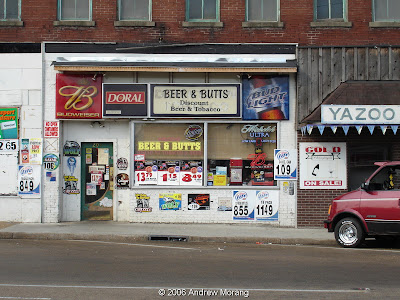 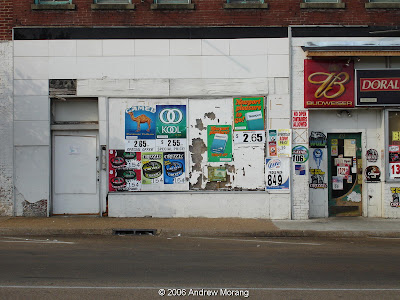 Entering town from the west, you drive up West Broadway, which is Hwy. 149. The scene is pretty grim. The commercial block is deserted except for package and cig. stores, which on Saturday do a booming business. Beer & Butts..... 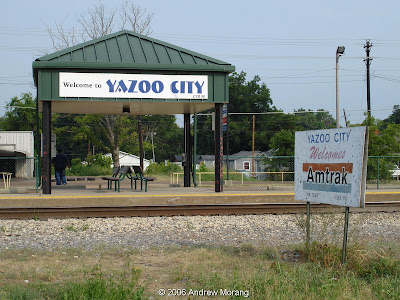 The Amtrak train from Chicago comes through Yazoo City and stops here. I took the sleeper from Chicago in June of 2006 and was a bit surprised how many people disembarked here and in Greenwood. There once must have been a depot but am not sure of its fate or whereabouts. 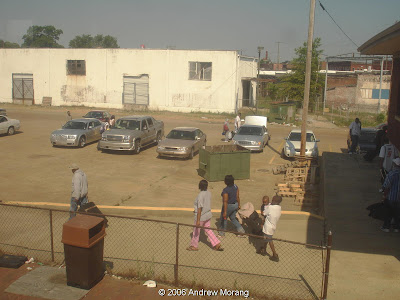 The photograph above, taken through the train window, shows the station in Greenwood, but the scene in Yazoo City is similar.

Some trivia: The actress, Stella Stevens (née Estelle Eggleston) was born in Yazoo City on October 1, 1936. She moved away at age 4.

Please click the link to see my article on the historic Afro-American Sons and Daughters Hospital, also in Yazoo City and now deserted and collapsing. 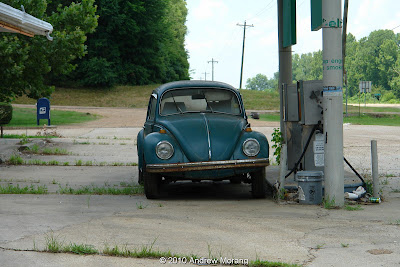 Heading south on Hwy 3, the town of Satartia is also pretty quiet, and the convenience store is closed. 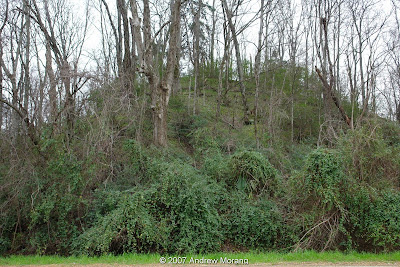 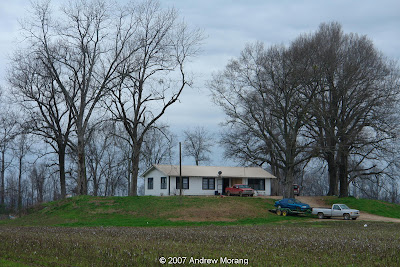 Of interest to archaeologists are the Indian burial mounds off Satartia Road between Satartia and Holly Bluff. One is tree-covered, and on the rainy day when a group and I visited the site, the rain had washed out numerous pottery shards. Another mound has a modern home on it. There is a lot to see in the Delta, and I need to do more exploring.

Photographs taken with an Olympus E-330 digital camera or a compact Fuji F31fd.
Posted by Kodachromeguy at 21:05 31 comments: 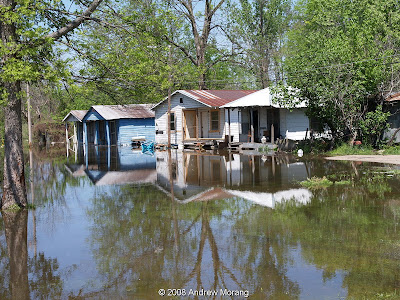 Marys Alley is north of the Ford Subdivision and west of the railroad tracks that run approximately parallel to North Washington Street. As you can see in photographs 1 and 2 (taken on 6 April, 2008), this area has a problem: when the Mississippi river rises to slightly above flood stage, about 49 of 50 feet on the Vicksburg gauge, the terrain floods. Houses east of the railroad tracks are protected by the rail embankment, but the land drops off to the west, and there are no levees between this small residential area and the Yazoo River. At about the same time, the city has to close Chickasaw and Long Lake Roads and the Kings Point Ferry becomes inaccessible. 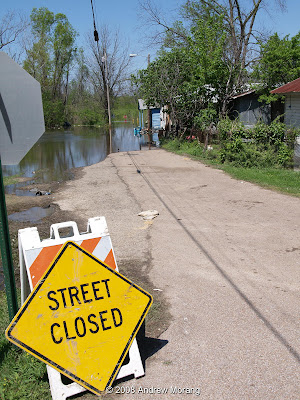 The houses here are decades old, possibly from the 1930s or 1940s. Who knows why this area was developed then; I assume the land was cheap and an occasional flood was considered an accepted risk. It is also possibly that the area did not flood as often, and subsequent levee construction changed water patterns. 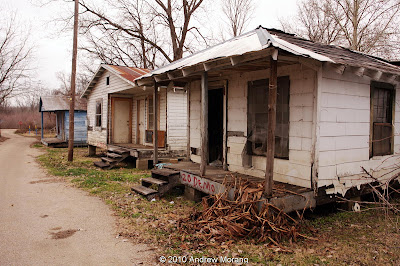 Marys Alley (no apostrophe in the name) resembles a classic Southern "Court." Originally, houses probably lined both sides of the Alley, but now we only have the structures on the north side. Photograph 3 above is from January 31, 2010. 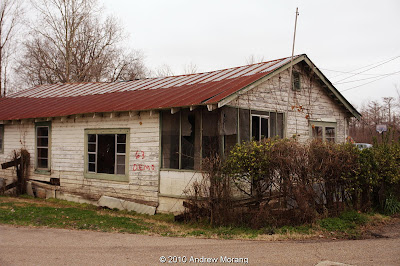 All the houses have spray-painted numbers on them, which means the city inspector has condemned them. I am not sure if they were purchased on a FEMA program to tear down structures in areas that chronically flood. The east-most house is no. 63, in poor condition. 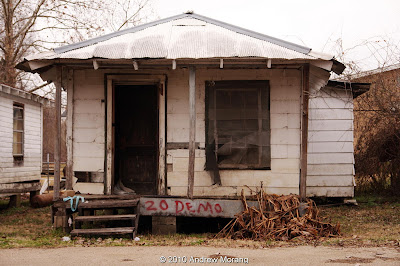 The next house is no. 20, also badly neglected. These houses were built with post-and-beam foundations, which at least elevated them about 2 or 3 feet above the ground, but why could they not have been given 4 or 5 feet, considering this was flood-prone area? 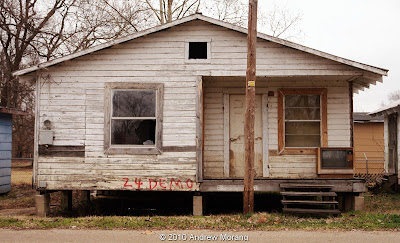 No. 24, the next in the group, was a more substantial house but was also elevated only about 2 ft off the ground. At least they were not built on slabs, like many of the ghastly ranch-style houses of the 1960s and 1970s. 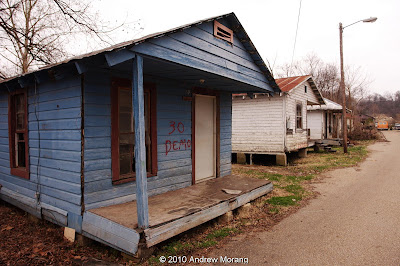 No. 30 was closer to the shape of a traditional shotgun shack, and was once a cheerful blue. 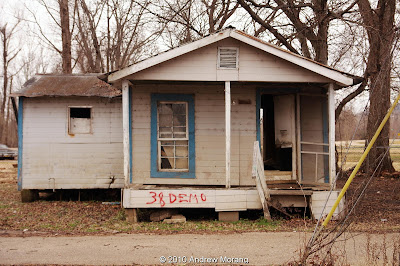 Finally, the last house still standing (as of January 2010) was no. 38. These houses were listed in the Vicksburg Post on the demolition list, so they will probably be crushed soon.

All images are from a Sony DSC-R1 digital camera (a superb APS-format unit), tripod-mounted.

For some black and white film pictures, please click here.
Posted by Kodachromeguy at 20:56 3 comments: