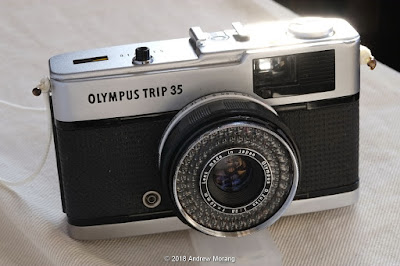 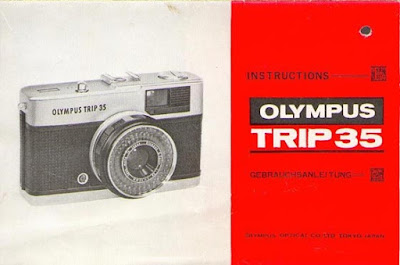 The Olympus Trip 35 is a compact 24×36mm-format point-and-shoot camera that was sold in the millions in the 1970s and 1980s. The specifications are pretty modest, but it takes amazingly good photographs when you use fine grain film. With the recent revival in film photography, the Trip 35 has become somewhat of a cult classic because it is compact, has a precision feel (like most Olympus cameras), and is fun to use. Prices range from about $30 to over $100, depending on condition. Sure, it is no Leica, but for many situations, the negatives from this Olympus are highly satisfying. 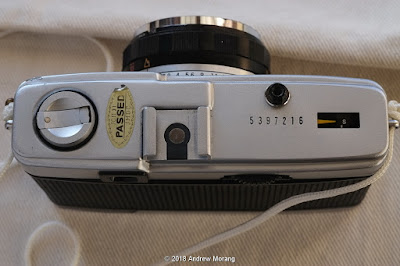 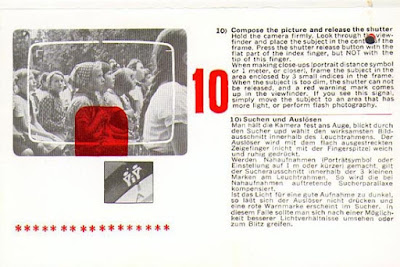 As you can see, this is a simple device. Film winding is via a wheel on the back. Exposure is automatic, controlled by a selenium meter that is coupled to the aperture and shutter. If the light is too low, a red flag pops up in the finder to tell you that the shutter button is locked.

The 40mm ƒ/2.8 lens consists of 4 elements in 3 groups, so it is probably a Tessar-type optic. Tessars have been in use for a century. Because of the limited number of glass-air surfaces, they are resistant to flare and are contrasty. And they have a characteristic that is sometimes called edge effect, where density builds up at abrupt feature edges on the negative. This gives the appearance of enhanced sharpness. Wide open, at ƒ/2.8, the sides of a frame are not too sharp, but stopped down, the scene is uniformly crisp (examples below). The lens is not as well corrected as a 6- or 7-element Sonnar- or Summicron-type lens, but those are much more expensive and complicated designs.

This Olympus lens is front-element focussing, meaning only the front part moves. My Voigtländer Vito BL camera has a unit focussing Color-Skopar lens, meaning the entire lens moves back and forth to focus. The Vito is definitely better optically than the Olympus, but that may be specific to my cameras. Many people have excellent results with element focussing Tessar-design lenses. 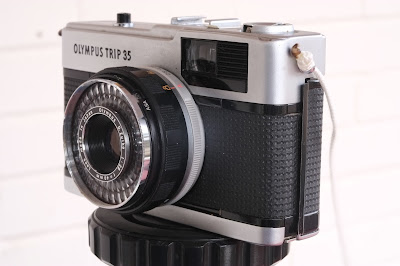 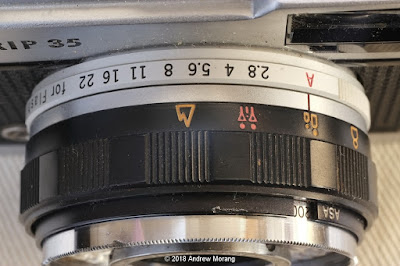 This little Olympus has limitations:
Regardless of these limitations, this Olympus is fun. I always used manual cameras, where I set aperture, shutter speed, and focus myself. With this little Trip 35, you can leave the focus at infinity (the mountain symbol), raise the camera to frame, and snap away.  It is so simple, so liberating. But I noticed I still carry it in the same way as my bigger cameras: left hand cradling the lens and right hand holding the right side and index finger on the shutter button. Solid grip, no breathing, and careful press.

Here are two examples of Trip 35 photos taken on Kodak BW400CN film in bright sunny conditions. I used a polarizing filter to darken the sky.
The lens has some barrel distortion, as shown by the curved sidewalk in the picture of the historic Phillips 66 gasoline station in McLean, Texas. Software could correct it, but I left it just as scanned.
The long-neglected hydraulic model of the Mississippi River basin in Buddy Butts Park, Jackson, is finally being cleaned by the Friends of Mississippi River Basin Model volunteer group. The buildings are good examples of texture, patterns, and shapes. Here I used TMax 100 film under contrasty conditions. Again, no complaints about this Olympus lens!
At low light, you can see the limitations of this Olympus. The picture of an old country store near Pattison was low contrast with some flare around the tree branches. The shutter speed would have been 1/40 sec and probably close to ƒ/2.8. Good, but not Leica quality. Still, I will test the Trip 35 some more to learn its limitations, and I have not yet tried color negative film. Its tiny size makes it a good travel camera if you need to pack light. If any of you readers want to experiment with film photography, a Trip 35 or one of the other compact Japanese rangefinder cameras from the 1970s or 1980s is an inexpensive way to get started. Write me and I will be glad to help.

For more information, the 35MMC blog reviewed the Trip 35 as well as many other compact cameras of the 1970s and 1980s. A blog by Peter Vis has a description of a tear-down.

This is the tenth article in my irregular series on tools for photographing decay. Previous articles (click the links):

Footloose around Vicksburg with Black and White Film

Dear Readers, Vicksburg is an interesting town topographically and historically. When the light is diffused, which means winter when there is rain or mist, I can't resist driving around and looking for interesting scenes. The following will be a semi-random set of film photographs. We will start in the north in Redwood on Hwy 3 and work our way south to U.S. 61 and then on into town. The silos in the photograph above have been empty since the 1970s. If you are interested in more views near Redwood:  https://worldofdecay.blogspot.com/2017/06/the-mississippi-delta-19-into-woods-in.html
This chimney sits all by itself just west of the southbound lane of 61. Most people drive by quickly and ignore it.
Drive west on Chicasaw Road, and eventually you reach the ramp for the Kings Point Ferry. The ferry is operated by the Warren County Board of Supervisors and provides access to Kings Point Island. Most of the traffic consists of logging trucks and hunters, but if the weather has been dry for a few weeks, a 2-wheel drive car can pass on the roads. 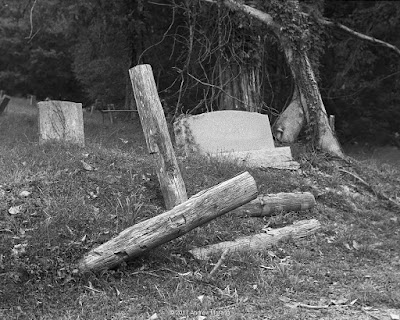 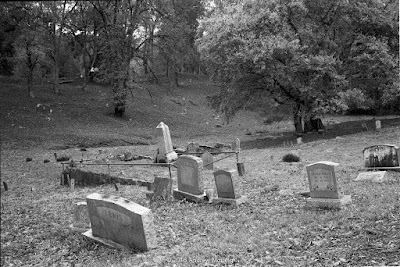 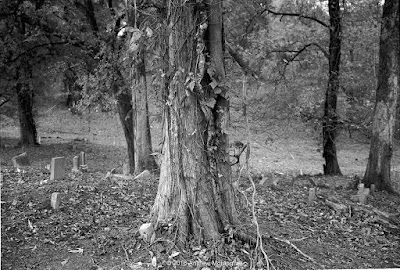 Beulah Cemetery is a historic burial ground at the end of Martin Luther King, Jr., Blvd. The cemetery was overgrown and neglected for many years but has been cleaned and put on city maintenance during the last 5 years. It is a peaceful spot.
Head back downtown, and you pass empty or condemned houses on MLK, Jr. Blvd. Georgia Ave. drops steeply down to the south. There were once many more houses in this valley (and I may have some pictures of them from decades ago), but today, the City could cease maintenance of this road with no obvious inconvenience to anyone.
We have lost many early-20th century houses and cottages. There just is not an economic incentive to fix up a house that has been neglected too long. This little asbestos-shingled cottage on  grove Street is an example.
By now, it is time for a coffee. Vicksburg's best espresso or other java beverage can be found at 61 Coffeehouse at 1101 Washington Street, right at the corner of Grove Street. Decades ago, this building housed Velchoff's Restaurant. The always interesting Attic Gallery is upstairs.
Pearl Street parallels the railroad tracks. Decades ago, Pearl Street was lined with modest cottages and shotgun houses. But residents and the operators of bed and breakfast homes complained of the noise from the locomotive horns. Over the years, the railroad bought properties and tore down the houses. And the city closed the grade crossing, after which the train engineers no longer needed to sound the warning horns. Click the link for photographs of many of these houses: https://worldofdecay.blogspot.com/2014/03/more-pearl-street-cottages-vicksburg.html
We head east to Military Avenue, another historic part of town. Here, too, many of the early 20th century houses have been neglected or torn down.
We can end our short tour at Marcus Bottom, an old neighborhood at the junction of Marcus Street and Halls Ferry Road. A new convenience store has been built on the site of this toilet. 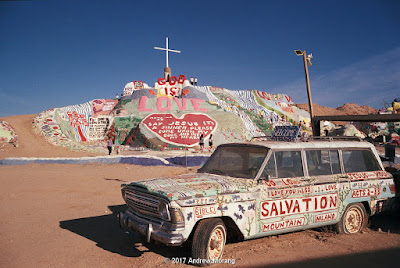 Drive southwards along the east shore of the Salton Sea in southern California, pass a U.S. Citizenship and Immigration Services (USCIS) checkpoint (yes, they have a new bureaucratic name), turn left at the sign for Slab City, and you come to a man-made mountain. This is the famous Salvation Mountain, the life work of Leonard Knight (1931–2014), who made his edifice of straw bales and adobe mud, covered with gallons (tons?) of paint. According to Wikipedia, the edifice "encompasses numerous murals and areas painted with Christian sayings and Bible verses, though its philosophy was built around the Sinner's Prayer." 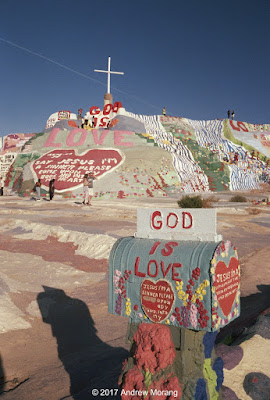 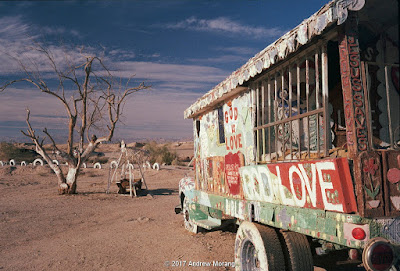 There are plenty of painted artifacts here, with Love, God, and other homilies in bold colors. These remind me of the folk art at Margaret's Gro, on North Washington Street, in Vicksburg, Mississippi. That, too, was built by a preacher as his Temple to the Lord. 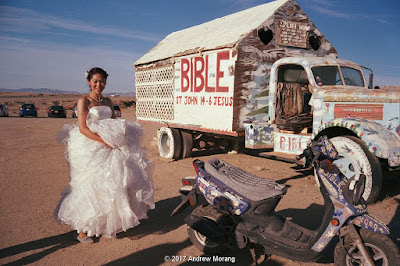 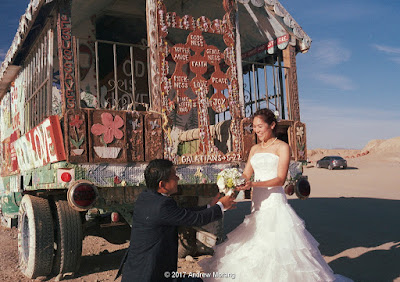 It really surprised me that this is a popular wedding photography site. Well, why not? But the light was harsh; the couple this day needed an assistant to hold a sun diffuser. 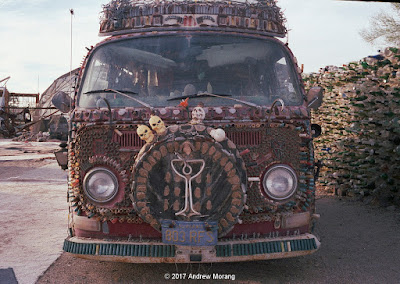 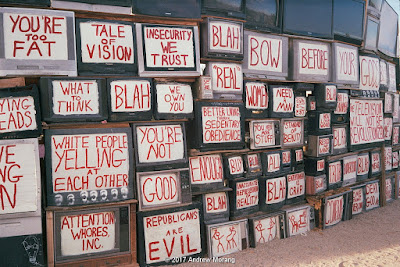 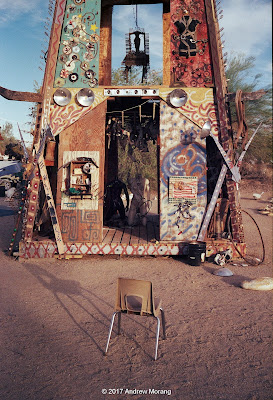 Drive a couple of blocks through Slab City, round a corner, and you reach East Jesus. According to Wikipedia,

"Slab City, also called The Slabs, is largely a snowbird community in the Sonoran Desert located in Imperial County, California, 156 miles northeast of San Diego within the California Badlands, and used by recreational vehicle owners and squatters from across North America. It took its name from concrete slabs that remained from the abandoned World War II Marine Corps barracks of Camp Dunlap."

The marine base closed in 1956, and the land status is a bit murky but likely belongs to the State of California. The residents of Slab possibly could be classified as squatters, but they certainly are creative ones. "East Jesus is an experimental, sustainable and habitable art installation" made from recycled materials and discarded electronics. Interesting stuff; it is well worth a drive to the Salton Sea if you are passing through southern California. Well, skip mid-summer, when the temperature is well over 100° F.

Photographs taken on Fuji 200 film with a Yashica Electro 35CC compact rangefinder camera. I scanned the negatives with a Phustek 7600i film scanner using Silverfast Ai software.
Posted by Kodachromeguy at 08:00 1 comment:

Tallulah, the parish seat of Madison Parish, Louisiana, is a small town in northeast Louisiana just off Interstate 20. I remember going there about 25 years ago with some other photographers to take pictures. It was rather forlorn then, and is even rougher today. The main businesses are the parish government and the large state prison on Green Street, with agriculture in the surrounding farm fields.
Snyder Street, facing the railroad tracks, was once the thriving commercial strip. Today, most of the store fronts are empty, and a couple of roofs have collapsed. Several times a day, a Kansas City Southern freight rumbles by, often with four locomotives pulling container carriers. This is the new global commerce that has left towns like Tallulah behind. 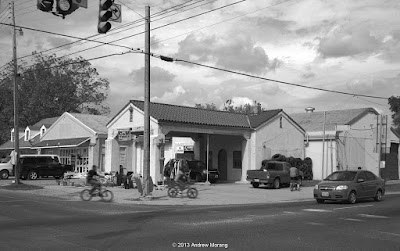 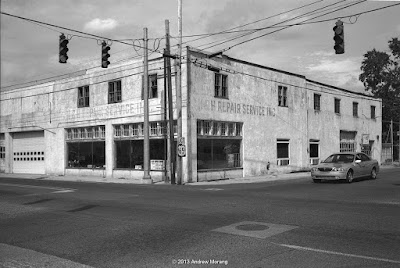 East Green Street is also U.S. Highway 80, which runs east-west through town. A number of old commercial buildings are in various states of use and abandonment. Before the 1970s, U.S. 80 was the only major highway, and all through traffic drove right through town. But I-20 was routed south of town, and today, most travelers ignore the city unless they specifically have a need to pull off at the Tallulah exit (and many of them just go to the truck stops and then continue on the interstate). 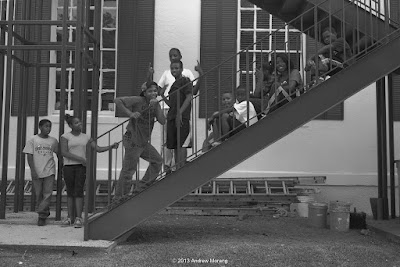 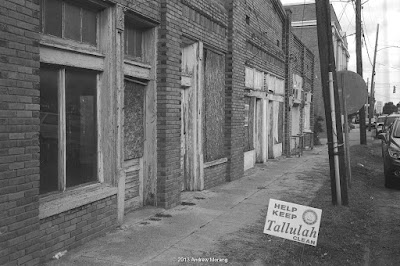 This is one of the many abandoned stores, this one on Chestnut Street, facing the courthouse. 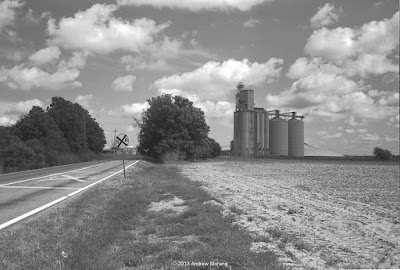 East of town, Louisiana Route 602 takes a U-shaped path south of the interstate. It makes an excellent bicycle route as you pass farm fields, silos, and patches of woodland. 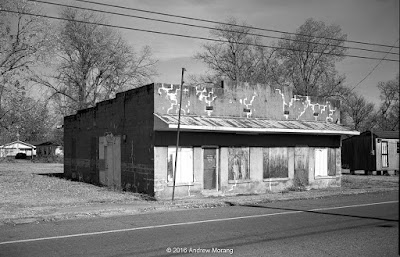 Heading west on Green Street, which is U.S. 80, you pass some rather rough neighborhoods, then pass the prison, and eventually get to farmfields. The main attraction to the west is the Tensas River National Wildlife Refuge, which has a large resident bear population.
The rectangle black and white photographs are from a medium format Fuji GW690II camera with 90mm f/3.5 lens. The film was either Kodak Panatomic-X or Kodak Tri-X 400. The 2017 view of shotgun houses is from a Hasselblad 501CM camera. I scanned the negatives on a Minolta Scan Multi film scanner using Silverfast Ai software.
Posted by Kodachromeguy at 08:00 No comments: