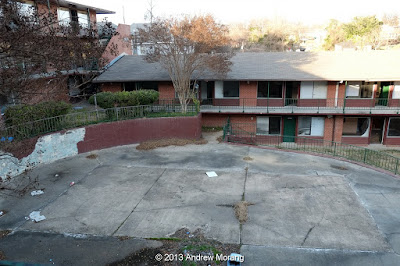 The Triple Six apartments at 1201 South Street were built in the mid-1960s. At the time, they were probably clean and decent, and even today, from a distance they do not look too bad - just totally boring. There was even a swimming pool once, but now it is concreted over. But over time, the apartments descended down the food chain and became nasty.
According to the Vicksburg Post (Dec. 24, 2013) the City condemned 40 percent of the 41-unit complex in 2012 under the City's slum clearance ordnance because of neglect. Empty units have been vandalized and stripped of metal, and are havens for drug activity. Another apartment complex on Crawford Street, owned by the same company, has also been condemned. A January Post article said both complexes have been sold and will be renovated - let's see if anything comes of it. We so often hear these promises in Vicksburg. 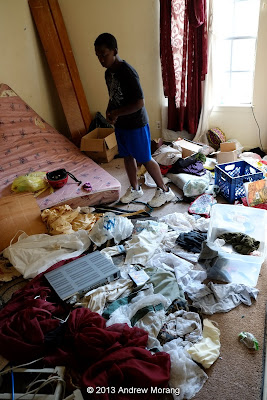 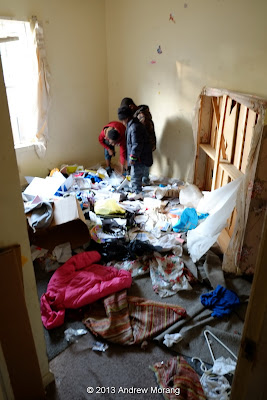 It is odd how some of the former tenants left piles of clothing and possessions when they vacated. Don't they need them wherever they moved? 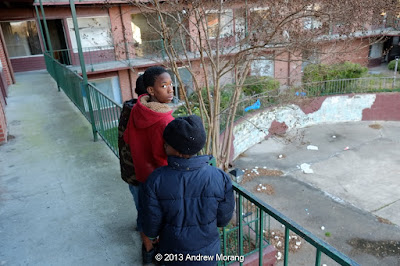 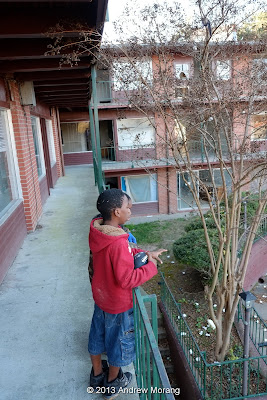 I met some of the local youngsters, who were glad to wander around with me while I took photographs.They were friendly and polite - the poor kids seemed bored.

South Street has some early-20th century apartments. The units at 1124 belong to an organization that helps homeless people.

I think the old house at 1122 belongs to the First Presbyterian Church at the corner of Cherry Street. Notice the odd arched covering over the 2nd story porch. I am glad that buildings like this have been preserved.

Photographs taken with a Fuji X-E1 digital camera, tripod-mounted.
UPDATE August 28, 2022. The South street Apartments are still unoccupied and have been seriously vandalized. A Vicksburg Post article noted that Habitat for Humanity owned the complex after 2016. Now, a developer has bought it.
Posted by Kodachromeguy at 12:37 1 comment:

Recovering and Rebuilding: Athens in 1953

1953 - Greece was finally at peace and rebuilding after a terrible decade of invasion, occupation, and civil war.  The Civil War had ended in 1949, during which tens of thousands died from starvation and Communist death squads. And the brutal civil war had followed invasion and occupation by German and Italian troops during World War II.  By 1950, a constitutional monarchy was in place, with backing from the United States and NATO. Athens was the capital, the economic and political center of a recovering country. Rebuilding the economy and putting people to work was a critical element of the Truman Doctrine. As written in Wikipedia, "The Truman Doctrine was an international relations policy set forth by the U.S. President Harry Truman in a speech on March 12, 1947, which stated that the U.S. would support Greece and Turkey with economic and military aid to prevent them from falling into the Soviet sphere."

In many ways, the Cold War began in Greece. The United States played a heavy-handed role in running Greek affairs from the late-1940s through the 1960s. As a benefit, Greece experienced its first two decades of peace in the 20th century, as well as an unprecedented economic boom. But there were many critics. For anti-U.S. views of the post-war era in Greece, I recommend Papandreau (1970) and Roubatis (1987).

This short introduction to the political situation in the 1950s sets the stage for my family's residence in Athens. Many American companies set up offices to design and construct civil works and infrastructure development projects, mostly funded by U.S. foreign aide. My father was a hydraulic engineer and accepted a job to help conduct watershed and hydraulic studies as part of major water supply projects. Planners expected Athens to grow in the post-war era, although I doubt they anticipated that it would eventually be a metropolis of 3.09 million in 2011 (General Secretariat of National Statistical Service of Greece).

In 1953, Athens was still a very "European" capital, with tree-shaded streets, parks, and elegant early-20th century houses. The following photographs document some of my father's wanderings in this historic city. 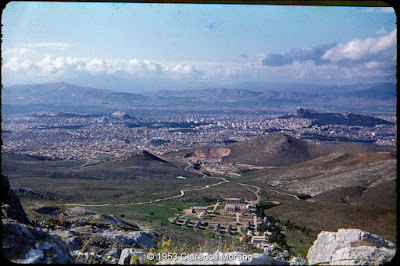 This is the view from Mt. Hymmetus, a mountain range east of the city. In 1953, Athens was a compact urban area with fields and olive groves on the outskirts.  Today this scene would reveal total urban sprawl, concrete, and smog. And notice the clear blue sky. My father noted in his diary that he had never been to a major city with such clean air.
This is the view northeast from the Acropolis. In 1953, Athens was a city of 2- and 3-floor stone buildings with sloped tile roofs and just a few taller modern buildings. Fortunately, Athens was not bombed in World War II (although the Port of Piraeus was). Many elegant mansions and townhouses from the late-1800s were still standing. But most were torn down in the pell-mell burst of post-war uncontrolled urban growth. Only in recent years have Athenians realized how much of their architectural heritage they destroyed. Now much of Athens is a boring concrete mess with massive traffic jams.
The Temple of Zeus and Hadrian's Gate have always been popular tourist sites. 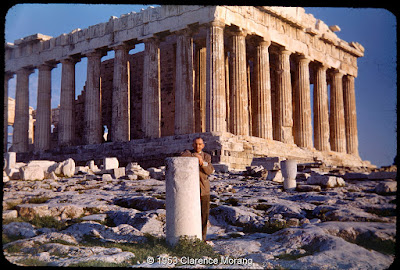 In the early 1950s, you could walk right into the Parthenon and clamber among the rocks. Now tourists are restricted to wood boardwalks.
Syndagma Square, in front of the Parliament Building, was the tourist and political center of Athens. Parades were held here and families brought their children on Sundays to walk around. The hotel in the background is the Hotel Grand Bretagne (Ξενοδοχείο Μεγάλη Βρεταννία), in business since 1874. On Christmas Day, 1944, while Winston Churchill was a guest (the German Army had been driven out only three months previously), British army engineers discovered a huge dynamite bomb in the sewers below the hotel (Churchill, 1953). British sappers successfully defused the bomb, sparing the hotel and its illustrious guest.
Note the yellow tram. I remember when the tracks were taken out in the late-1950s, one of those misguided "modernization" steps to substitute smelly diesel buses instead. I wonder if General Motors had a hand in this as in U.S. cities? 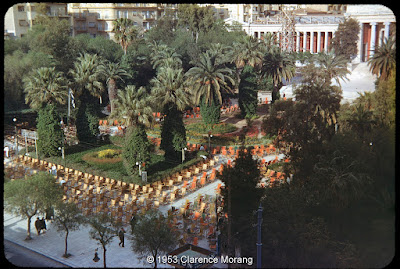 The older parks and city squares were beautifully planted with palms and gardens.  Many now are paved.
Omonia Square was the heart of the commercial city, close to markets and factories. The Metro to Piraeus and Kiffisias ran underneath. Notice the blue sky....
From Omonia, you could walk south on Athinas Street towards the Monastiraki District and the Acropolis.
Walk south from Omonia, and you soon reached the famous Central Market. It has not changed all that much to this day. We have explored the Central Market before (click the link).
Further south, one would have entered Monasteraki Square, in the Plaka district. On a narrow street to the right was the flea market.  It is still there, although rather modernized. We have explored the flea market before:
The Plaka area also has not changed too much, but it has been gentrified over the decades. For a more recent view, click the 2013 link.

(Note, this is the same Andreas Papandreou who was Prime Minister of Greece in the 1980s. He had a troubled relationship with the United States when it suited his political needs, even though he served in the U.S. Navy, had U.S. citizenship, married an American wife, and taught economics at Berkeley.) 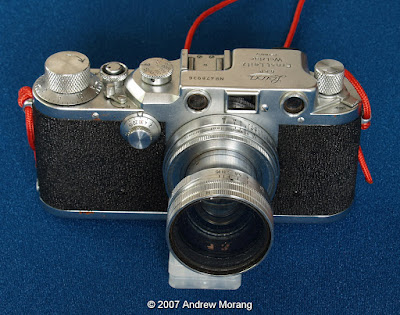 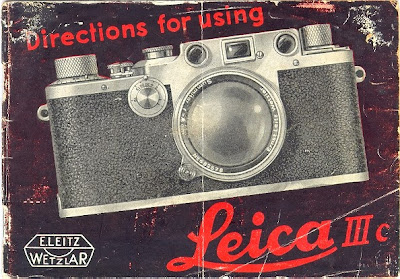 My dad took the 1953 photographs with a Leica IIIC rangefinder camera with 5cm ƒ/2 Summitar lens (I still use this lens regularly). The Kodachrome film was processed in the United States or France with difficulty because of the undependable postal service in the early 1950s. I scanned the Kodachrome slides on a Plustek 7600i film scanner using Silverfast Ai software.
Posted by Kodachromeguy at 09:00 1 comment:

Round Barn of Chatham, Mississippi 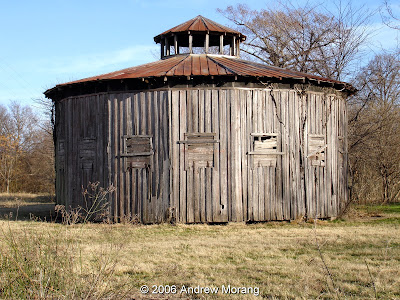 It is called round but is really 16-sided. According to Preservation Mississippi's 101 Mississippi Places to See Before You Die (the preliminary list), the barn dates from the 1920s:

SHARECROPPERS' COTTON STORAGE BARN Stein Rd. toward Lake Jackson
Chatham MS
Sharecroppers' shares were kept separate in this structure which was divided into compartments. Cotton trailers were backed up to the high openings and the cotton was unloaded into the individual farmer's section. 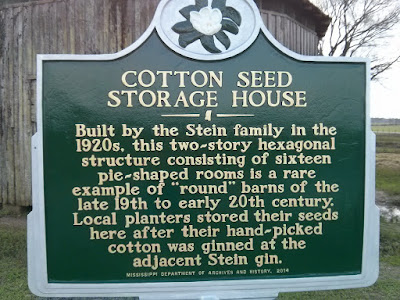 Update January 2017.  Mississippi Department of Archives and History has placed a historic marker in front of the barn. 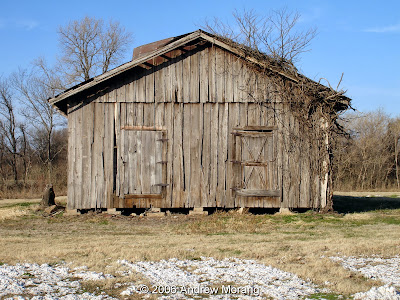 As of a few years ago, these fields were still being used for cotton production. But, depending on commodity prices, they could also be used for soybeans or something else. 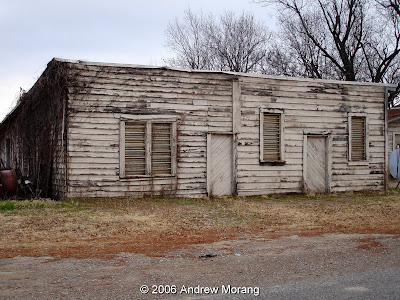 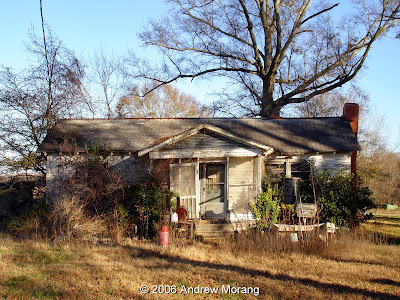 Drive on Lake Jackson Road, and you can see some old sheds and crumbling houses.

True round barns were pioneered at the University of Illinois, in Urbana, Illinois. The round barns were supposed to be easier to erect, use less material for the enclosed volume, and withstand Midwestern wind storms better than the regular rectangle design. The round design became popular in the decades between 1880 and 1920, with hundreds being erected in Illinois, Indiana, and adjoining states. Experimentation with this unusual architectural style ended during the agricultural depression following World War I. I have eaten in a restaurant that was situated in one of these round barns in Champaign, Illinois. As I recall, the roof was supported by a single strong central pole, leaving much open space around the periphery.

There is a nationwide round barn inventory you can explore.

Another true round barn is in Arcadia, Oklahoma, along Route 66.

Not far away from Chatham is another architectural curiosity, the Italianate and now-crumbling mansion Mount Holly.

These are digital images from a Sony DSC-W7 compact digital camera.
Posted by Kodachromeguy at 22:16 4 comments: