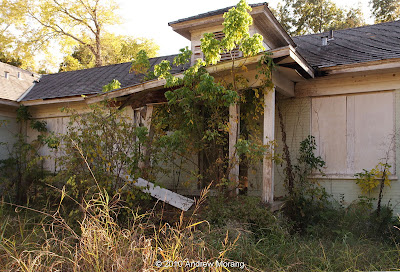 The Afro-American Sons and Daughters Hospital was a pioneering medical institution and possibly the only health care resource for African Americans residents of west central Mississippi during the mid-20th century. According to Wikipedia, "The Afro-American Sons and Daughters was a fraternal organization in Mississippi and one of the leading black voluntary associations in the state. Organized in 1924, it had 35,000 members by the 1930s. The founder of the group was Thomas J. Huddleston, Sr., a prosperous black entrepreneur and advocate of Booker T. Washington's self-help philosophy." The hospital was built in 1928 and provided health care, including major surgery, until 1972, when it closed forever. 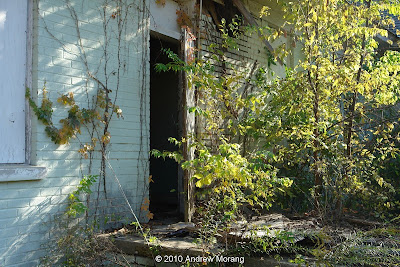 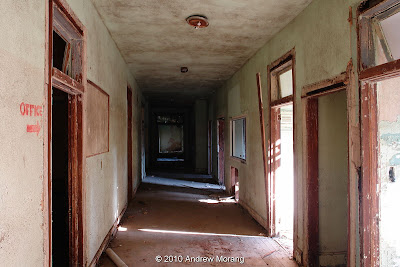 As you can see from these photographs, the hospital is in poor condition. Plants are taking over the site, parts of the roof have failed, and the floors are rotting. When I walked inside, I immediately smelled the odor of damp, decaying wood. A big tree in the back fell in a storm and crashed through the roof. That part of the building in imploding. The building, at 8th St. and Webster Ave. in Yazoo City, was added to the National Register of Historic Places in 2006. Sadly, that distinction does not retard decay from the elements. 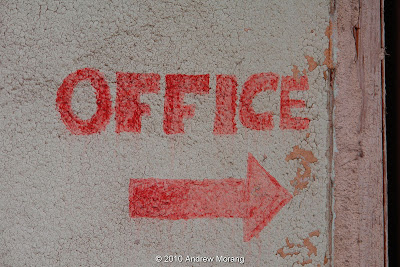 On contemporary standards, the hallways and rooms were small and cramped. The paint was that infamous institutional green that you see in schools and older public buildings everywhere. The hospital had one floor on a design with three wings (like a letter "E"). Large louvered openings in the ceiling once held vent fans to provide air flow during hot summers. I hope the operating rooms were cooled, but I suspect not. 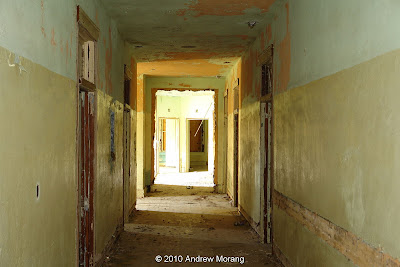 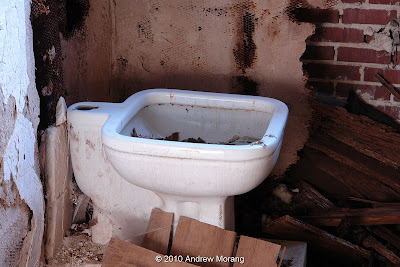 I read about this site in the Mississippi Heritage Trust 2007 list of 10 Most Endangered Historic Places. The article states that the building underwent a major change in 1935 when another wing was added. The hospital campus included a residence for its nurses. 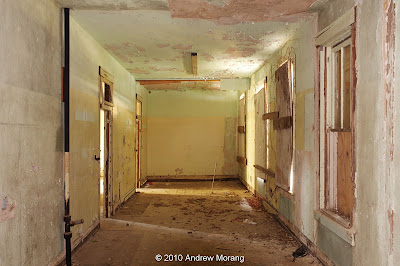 The room above may have been a ward with several beds. It was so dark, I could barely see the outlines of the far wall. I am often amazed how effective digital cameras are in low light. Open the shutter and let the sensing elements continue to record light until they receive enough energy to form the image. In the film era, I would have used a Luna-Pro light meter to make an incident light measurement, then add two, three, or more f-stops to the measurement to allow for film reciprocity failure. And the colors would have shifted. 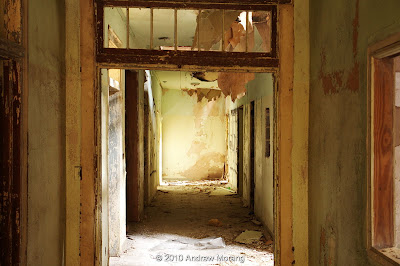 A interesting paper by David T. and Linda R. Beito (Social Science History. 2006; 30: 551-569) describes the history of the Afro-American hospital and outlines the grim reality of health care for poor Blacks in the 1920s in Mississippi.

Here is the abstract:


"Under the burden of Jim Crow, how did African Americans obtain health care? For nearly 40 years the Afro-American Hospital of Yazoo City, Mississippi, was a leading health care supplier for blacks in the Mississippi Delta. It was founded in 1928 by the Afro-American Sons and Daughters, a black fraternal society, and provided a wide range of medical services. The society, which eventually had 35,000 members, was led by Thomas J. Huddleston, a prosperous black entrepreneur and advocate of Booker T. Washington's self-help philosophy. The hospital had a low death rate compared to other hospitals that served blacks in the South during the period. It ceased operation in 1966 as a fraternal entity after years of increasingly burdensome regulation, competitive pressure from government and third-party health care alternatives, and the migration of younger dues-paying blacks to the North."


Please click the link for some views of the rest of Yazoo City. Thank you for reading. 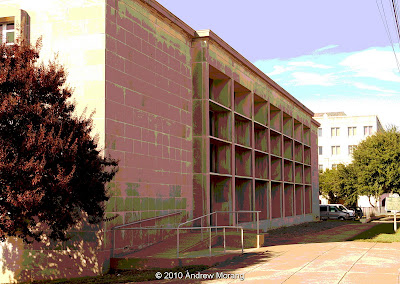 The Mississippi Heritage Trust included the Jackson Municipal Library on their 2005 list of "10 Most Endangered Historic Places." I have driven along North State Street many times but never before paid attention to the unused rectangle limestone building across the street from the Welty library (Jackson's current public library). This is the site of the 1961 incident when the "Tougaloo Nine" tried to read books that were not available at the inferior Carver Library, the facility that blacks were forced to use then. The police ordered the students to leave, and when they refused, they were arrested. This building should be preserved as one of the many sites where the civil rights movement began to change America. 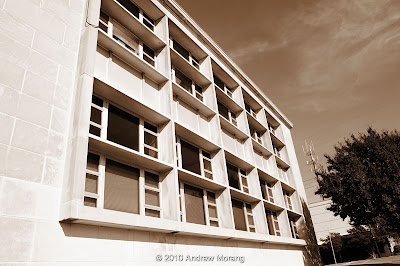 This 1954 structure was built in a stern 1950s post-art-deco blockhouse design, but it's not as bad as it sounds. The windows are shaded by ledges and overhangs, and the aluminum or steel frames lend an air of symmetry. Ledges like this were popular through the 1960s but you seldom see them on new buildings. Why not? The sun still shines. 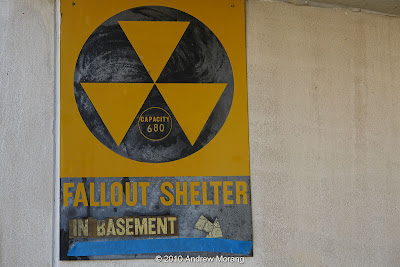 Do any of you readers remember fallout shelters? In the 1950s, office buildings and institutions all over the United States had these yellow and black signs with the ominous triple triangles. Ironically, the signs were so well made, they have outlasted the Soviet Union and you still see them mounted on older buildings if you look carefully. In the old days, fallout shelters were stocked with cans of water, dry foods, and sturdy plastic bags (to use as toilets - really!). 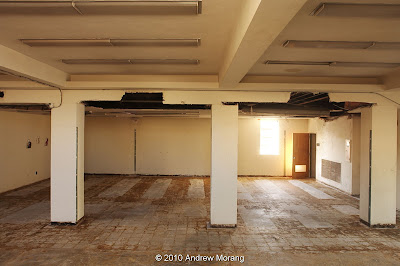 The inside of the old municipal library does not look like much any more. The low ceilings and low-grade Sheetrock construction are rather depressing. What will be its fate? The City of Jackson does not have a very good record of preserving its historic buildings, and increasingly severe budget problems will impose even more neglect in years to come. 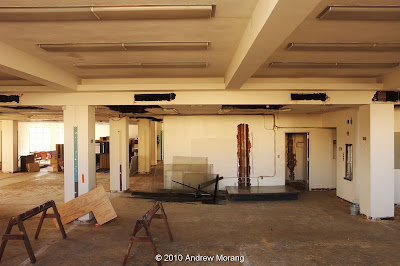 The windows on the ground floor are shielded with black cloth inner panels, but I was able to take these photographs over the top of some of the panels where they did not extend up to the window frame. It underscores why it is handy to use a camera with an articulated viewing screen (somewhat similar to holding an old Rolleiflex camera upside down over a crowd or above a fence).

All photographs taken with a Sony DSC-R1 camera, hand-held.

November 15, 2010 update: A reader kindly provided a link to an article from the Northside Sun Magazine which describes how the Mississippi Baptist Convention Board bought the building in 2009. Earlier, the Duckworth Realty Company tried to convert the building into loft apartments, but the plan did not work out:

The Beach in Winter

The beach in winter is a lonely place. The beach houses and cabanas seem to be waiting for happy families and energetic children to return. In the off season, bathhouses always interested me because of their symmetry. They have a transient appearance, but yet many are decades old. 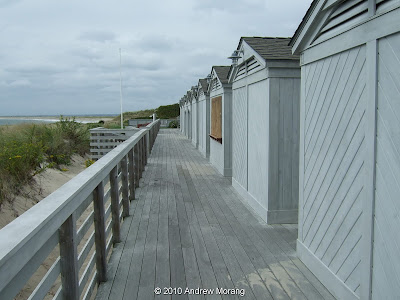 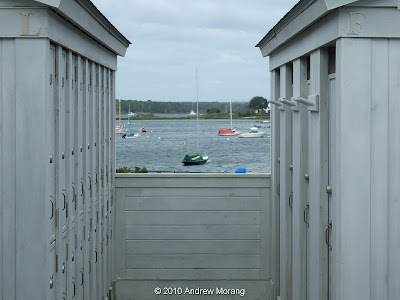 These first two photographs are from the beach club at Watch Hill, Rhode Island. The bathhouse is built on a narrow sand spit, Napatree Point, that sticks out west into Long Island Sound. The second scene is looking north into Watch Hill Cove. 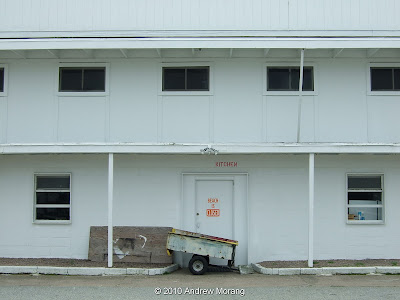 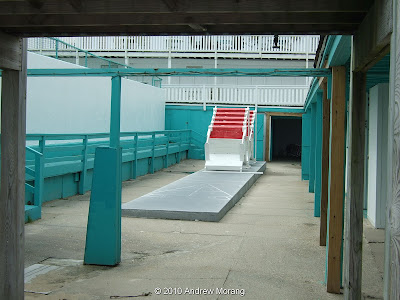 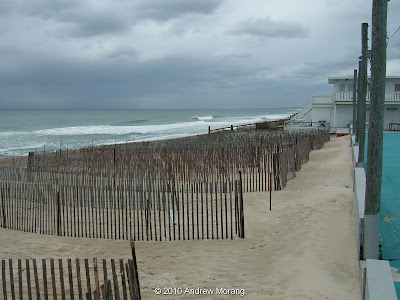 Drive a few miles east along the Atlantic shore of Rhode Island and you reach Misquamicut State Beach. 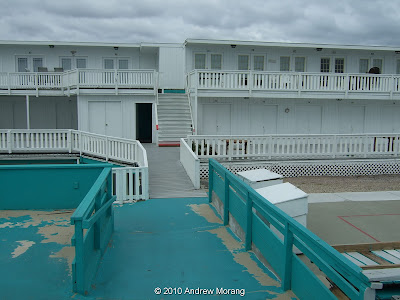 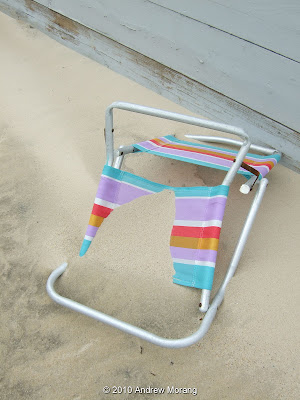 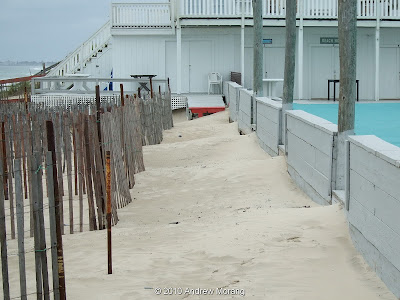 The parking lot view is a bit utilitarian, but the ocean side of the bathhouse is quite nice with its cheerful turquoise paint and expansive view of the ocean. The rows of sand fencing shows that the state workers are trying to trap as much sand as possible. Rhode Island's beaches have been retreating (eroding) for decades, but I am not sure what the rate has been here at Misquamicut. 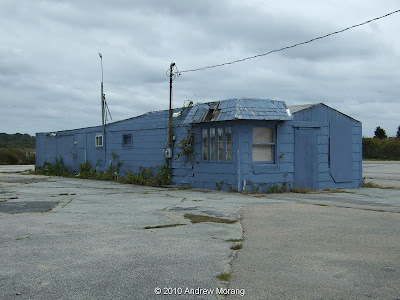 Atlantic Avenue near Misquamicut has the normal beachy collection of motels, convenience stores, and restaurants. The one above has seen better days. 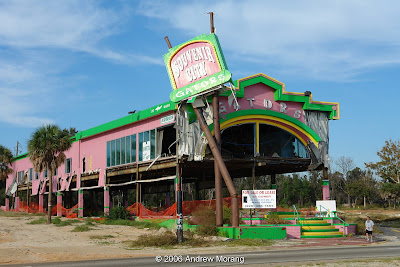 Rhode Island somehow avoided the most crass examples of late-20th century beach architecture, such as the giant pink shops selling swim suits and tee shirts. The monstrosity above was the former Souvenir City near Biloxi, Mississippi, in October 2006, over a year after Hurricane Katrina devastated the Gulf Coast. 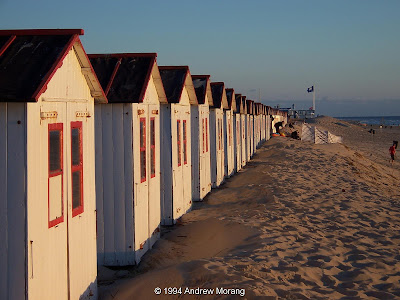 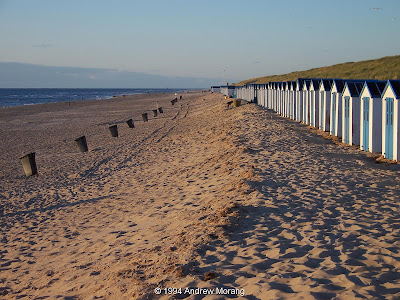 Let's move Across the Atlantic to the North Sea coast of the Netherlands. The cheerful little dressing cottages above are are on the island of Texel, near the resort town of Da Koog. Da Koog is popular with German tourists. They did not often see Americans there. 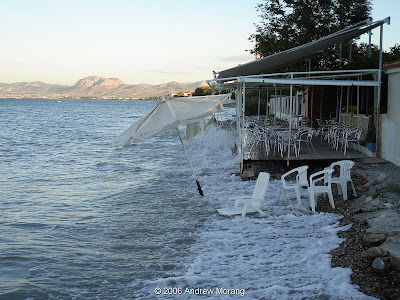 Now let's move south to the Gulf of Corinth in Greece. There is minimal tidal variation in the Gulf, but it experiences seiching (water set-up caused by steady wind pushing the water to one end of the basin). This is also a very seismically active area with opposite sides of the Gulf experiencing uplift or sinking at different rates. 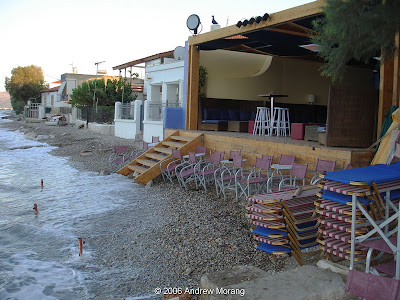 This is a night club/bar near the town of Nerantza, a few kilometers west of Corinth. Note the umbrella posts in the water. 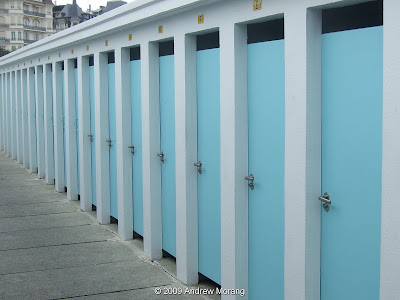 Even lake beaches have bathhouses. This is the Bains des Pâquis, in Geneva, Switzerland. The bath house and a small beach were built in 1872 on a pier that projects into Lac Leman. The present structures were rebuilt in 1932. The water is cold, even on a hot summer day. It is a relaxing way to spend a day if you are passing through Geneva. 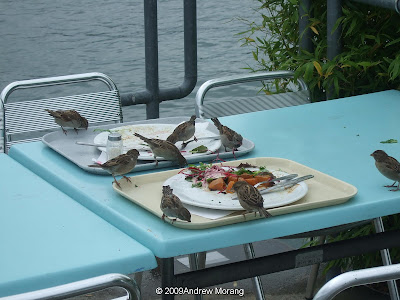 There is a popular and modest-priced cafe at the Pâquis. If you don't finish your meal, a sparrow or duck will finish it off. 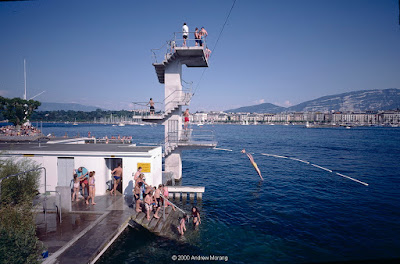 2018 update:  Here is a summer photograph of the Bains des Pâquis (scan from a Kodachrome slide, taken with a Leica M2 rangefinder camera using a 20mm f/5.6 Russar lens).
Posted by Kodachromeguy at 20:44 2 comments: