Squatters in the city, Athens, Greece

Athens is the capital as well as the economic, intellectual, cultural, and industrial center of modern Greece. It is one of the world's oldest cities, with a recorded history of at least 3,400 years. Following the end of the bitter civil war in 1949 and with a degree stability ensured by United States aide (remember the Truman Doctrine?), the sleepy, semi-provincial city exploded in uncontrolled urban growth. What had been an elegant but small European city with olive groves and pine trees on the outskirts morphed into an unplanned mass of concrete filling the entire valley. The population of the urban area now exceeds 4 million. A few suburbs like Filothei and Psychiko managed to preserve trees and parks, but most others districts were totally developed. 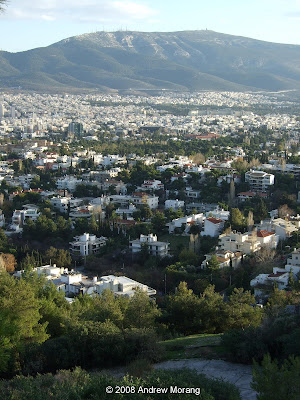 A small ridge of limestone hills runs northeast from the center of downtown Athens. In Psychiko, the wealthy built beautiful houses with spectacular views (Photograph 1 above). This is the link to the Google Map showing this area. 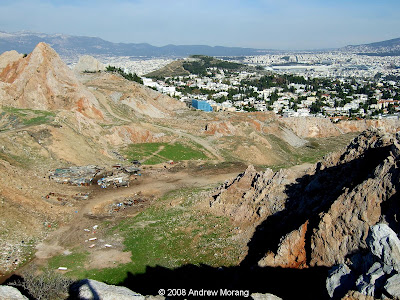 Amazingly, there is still some unused, semi-abandoned terrain near the most exclusive suburbs. Sometime in the past, the hills were quarried for building material. At least one of these quarries must be in limbo regarding ownership because year after year, there appears to be no official government or private presence. 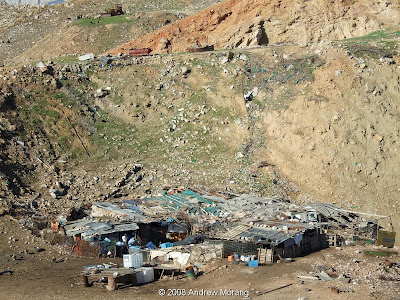 But in December of 2008, I was amazed to see that a peasant lived in the quarry. He had built a collection of shacks with scrap lumber, bricks, and steel roofing. The fellow showed up in a beat-up pickup truck and opened up pens, out of which waddled geese, ducks, chickens, goats, and turkeys. 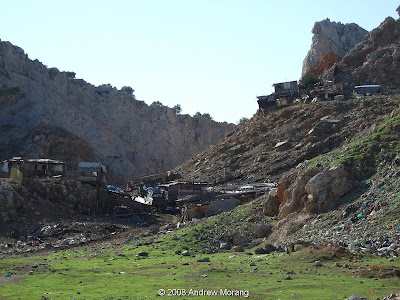 He looks pretty well-settled to me. What a spot: no traffic, quiet, and a view (no electricity or water, either). 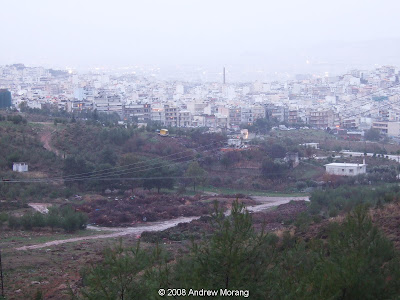 Further northwest, Filothei's most exclusive mansions and embassies run up another hill (house lots here cost well in excess of 1 million Euros). But once you top the crest of the hill, the northwest side, facing the Galatsi District, is another broad patch of terrain in limbo status. The photograph above was taken on a cold December evening with a bit of snow in the air. 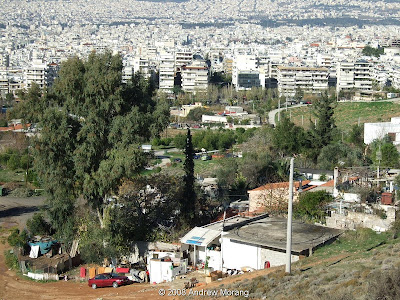 Squatters live here in little brick houses with goats and chickens. I know from personal experience that some families have lived here since the 1970s. The have beat-up trucks and keep bees. Do they pay taxes? Who runs the electricity lines? A family friend's father claims ownership. He has been in court fighting for title for four decades. Meanwhile, the peasants have some of the best views in the city.
Posted by Kodachromeguy at 21:59 1 comment: 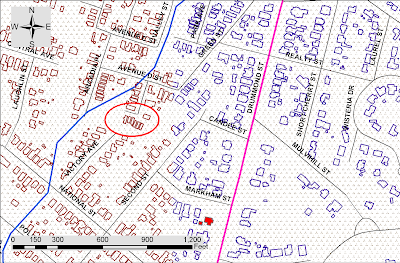 Avenue E is a short little street located west of Drummond Street and south of Bowmar Avenue. This area features a maze of narrow streets crowded with cottages and shotgun shacks dating from the early 20th century. Five of the streets were somewhat optimistically named avenues and given the letter A through E. At least they were not named boulevards, which make me think of grand thoroughfares in Paris or London. 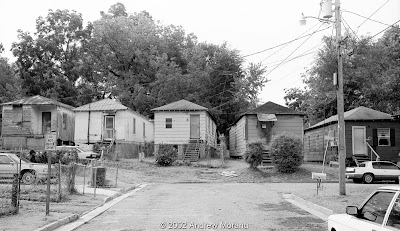 Avenue E is dead end and has access via Valley Street. At one time, there were at least six matching shotgun houses facing north on the south side of the street. The photograph above, taken from Valley Street, shows house numbers 902, 904, 906, 908, and 910. 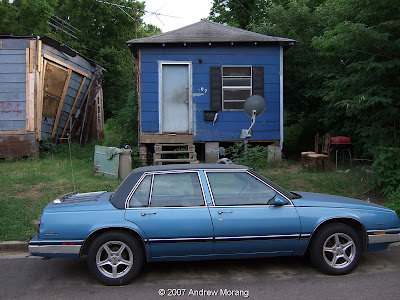 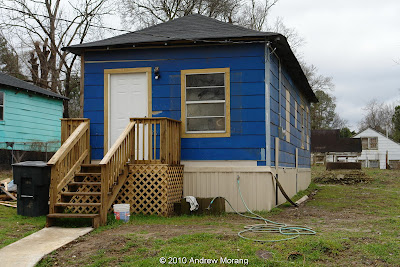 In 2007, 902 was rather ratty, but it has been fixed up with new windows and a front porch. This shows that these little houses have potential. 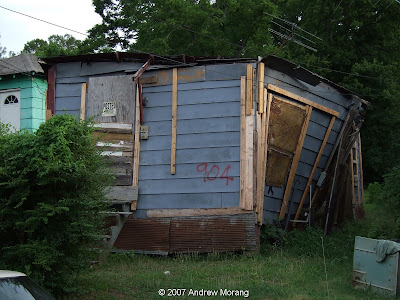 This 2007 photograph shows 904 with the red spray paint number from the city inspector, indicating that it had been condemned. 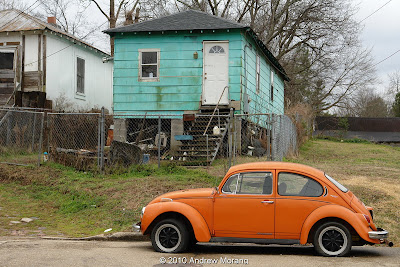 As long as I remember, 906 has been painted with this bright green-blue color and had rickety steps. 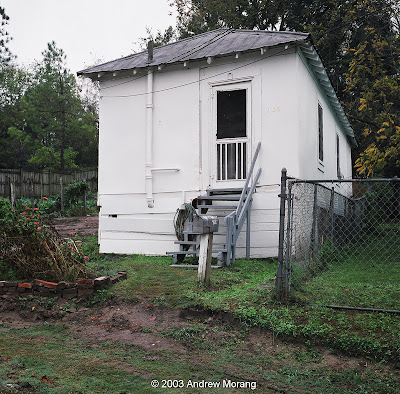 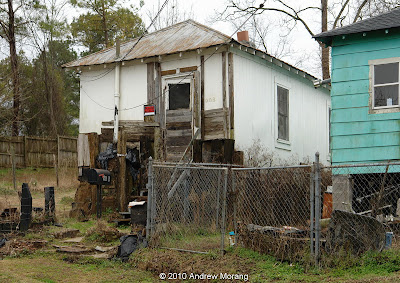 But, by 2010, 908 has deteriorated. I think the houses are occupied because I may have seen someone peeping out from the curtains when I set up my tripod. 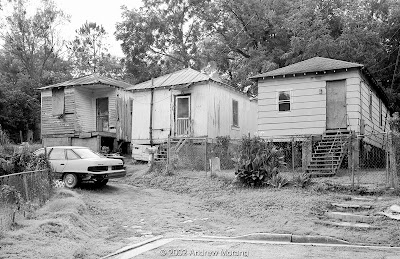 This 2002 photograph shows number 910 (behind the car), which was torn down sometime in the mid-2000s. Neighborhoods like this are steadily losing their characteristic architecture. The black and white photographs were taken on 120-size Kodak Panatomic-X film with a Fuji GW690II rangefinder camera. Film developed in Agfa Rodinol.
Posted by Kodachromeguy at 10:00 No comments:

Vicksburg was once a city of many churches. But we have lost many of these elegant wood frame houses of worship over the last decade. The example below was located at 1205 Martin Luther King Jr., Blvd., next to a brick commercial building occupied by Gore's Hardware Store and near the intersection with Main Street. 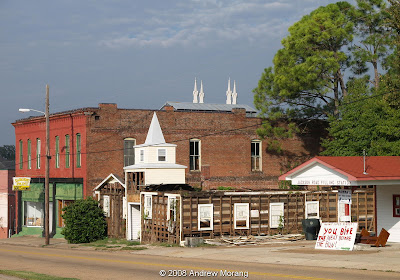 I do not remember the full story of why the church was dismantled, but I recall some sort of mistake was made in issuing a permit to the property owner. The building dated from the late 1800s and was not supposed to be torn down. 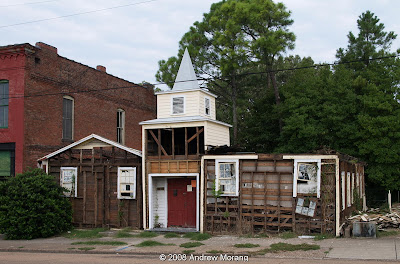 Notice the building's simple but classic symmetry, with a steeple in the center and even rows of windows on all sides. In an earlier era, the windows allowed maximum air flow on hot summer Sundays. 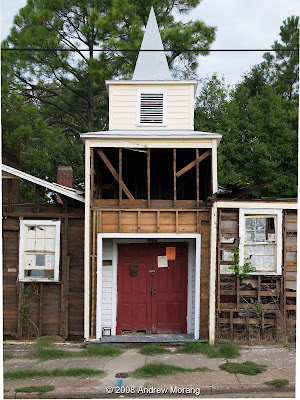 MLK Jr. Blvd. still has some historic architecture, such as the old filling station and warehouse. 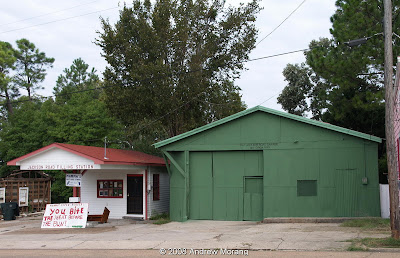 The filling station has become Mamma's Super Burgers. Great logo: "You bite the meat before the bun." 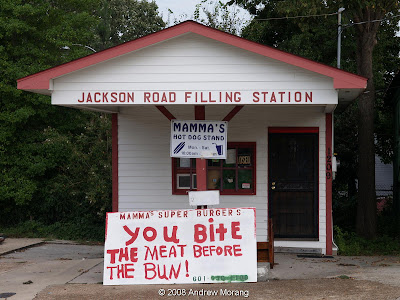 I will post more photographs from MLK Jr. Blvd. and more churches in the future.
Posted by Kodachromeguy at 15:40 2 comments: