Łódź (in Yiddish, לאדזש‎, Lodzh) is an old textile industrial city in central Poland, about 130 km southwest of Warsaw. Łódź became an industrial powerhouse in the mid-late 19th century, when Jewish industrialists built immense textile mills to process cotton. Before our Civil War, much of the cotton came from the southern United States. The mills continued to thrive until World War II, when much of the production shut down. During the Communist era (1946-1989), the mills had a steady customer base in the Soviet block, but little investment was made in modernizing equipment and production processes. When Communism collapsed in 1989-1992, the mills were obsolete and could not compete in the international market. Many shut down, and Łódź became a grim Polish-style rust-belt city.

However, unlike most cities throughout Poland, Łódź did not suffer much destruction in World War II. The Jewish population was rounded up and exterminated in death camps, but the city did not suffer major bombing or warfare, sparing some amazing early 20th century architecture.

And Łódź is coming back! Because of the immense wealth generated by the textile industry, luxurious mansions coexisted with immense brick factories and old tenement houses. Many of the mills have been redeveloped as high tech think tanks, malls, or hotels. The arts thrive. Mansions have become museums. The main street through town, ulica Piotrkowski, throbs with cafes, restaurants, and boutiques. We were impressed at the activity, although there is still a lot of urban decay throughout the city. 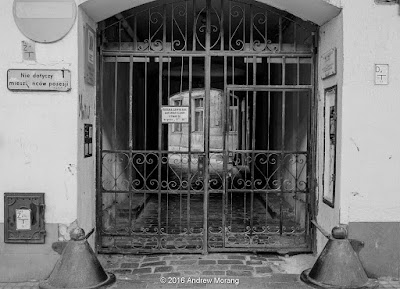 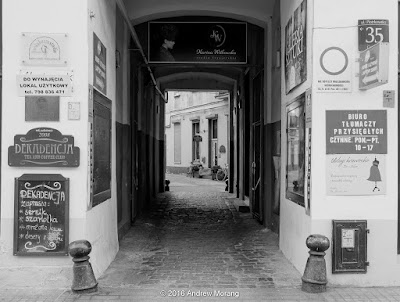 The typical residential apartment in the city consisted of a short frontage along the street with two long arms extending back into the lot, much like a "U" shape. A passageway (tunnel) led into a courtyard, where residents had access to their stairwells. I assume that in the 1800s, latrines may have been located in the courtyards (as described by Isaac Bashevis Singer (Yiddish: יצחק באַשעװיס זינגער‎) in some of his pre-war novels (he was awarded the Nobel Prize for literature in 1978). The two examples above are passageways off ulica Piotrkowska. The massive iron cones were designed to deflect wagon wheels. 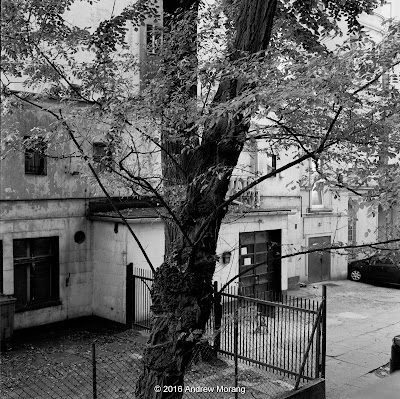 During a recent trip to Łódź, my wife and I booked a couple of nights in Hostelik Wiktoriański at Sienkiewicza 40, near the main tourist area of the revived downtown. Come to find out, the lobby of the hostel faced the main street, but the rooms were in back in the courtyard. It was a bit gray and grimy, and not too welcoming. But the rooms were clean and the plumbing worked, and parking was free (for our tiny rental Opal) so we can't complain too much. A art-house cinema was in the building across the courtyard. I saw stacks of film cans in the lobby, so possibly they are trying to preserve films and project them optically (the old-fashioned way). 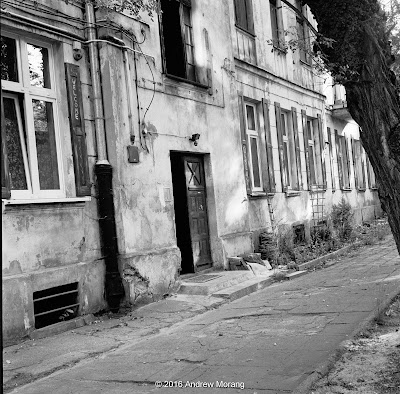 These buildings look like they have not had much upgrading over the years other than electrical work. Of course, now there is interior plumbing. And the windows are modern. Great door. It has survived a century - how many people have passed through it? What drama, tragedy, or hope has it witnessed? 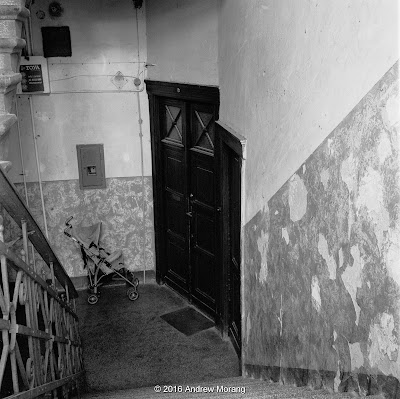 The hallways on the upper floors were pretty dingy. But the buildings had been massively built a century ago. 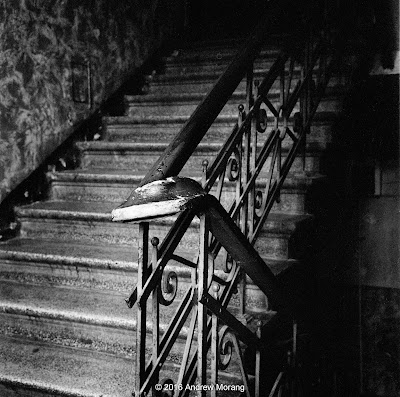 While I took this picture, a lady on her way to work came down the steps. She looked annoyed at me. She likely figured I was another one of those obnoxious tourists who stayed at the hostel. Sorry, this was too good of a chance to see inside one of these old buildings.

The square pictures are scans of Kodak Tri-X film that I shot with a Rolleiflex 3.5E camera, equipped with the Schneider Xenotar 75mm ƒ/3.5 lens. I developed the film in Kodak HC-110 developer at dilution "B", 4:30 minutes at 68° F. I posted them at 2,400 pixels wide, so click any frame to see more detail.
Posted by Kodachromeguy at 22:19 1 comment:

From the archives: Vicksburg in 1997 with Agfa Scala film

About 20 years ago, the venerable German photographic company, Agfa, made a black and white transparency film named Scala. It was intended to be projected, meaning to be used for black and white slides that would be projected on a screen. I tried Scala several times and liked it, but did not use it regularly. The Scala was ISO 200 and needed to be processed at a laboratory with the correct Scala chemicals. Possibly you could buy the chemicals for home use, but I never checked. Recently, I rediscovered my 1997-vintage Scala 35mm slides and did a test scan with my Plustek 7600i scanner. They looked really nice and I scanned most of the roll. Here is a semi-random tour of Vicksburg, Mississippi. 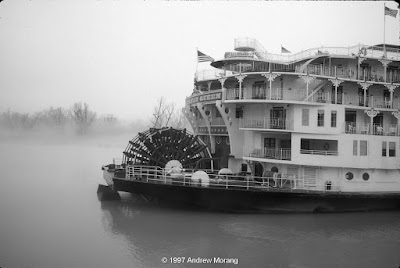 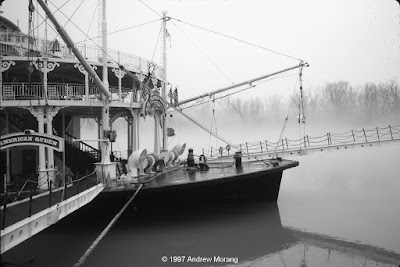 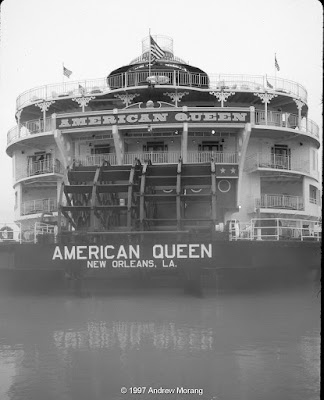 In the 1990s, three river boats regularly visited Vicksburg, the Mississippi Queen, the Delta Queen and the American Queen. All three stopped service during the economic downturn of 2007-2009. The Mississippi Queen was cut up for scrap in 2011. The Delta Queen, which was made of wood, can no longer be used for passenger traffic. But the American Queen is now (as of 2016) back in service with regular stops at the Vicksburg waterfront on the Yazoo diversionary canal. 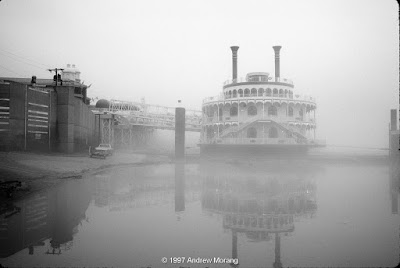 In 1997, the Harrah's Vicksburg Casino was moored in its cofferdam on the canal side of the floodwall. The hotel was on land, but the gambling facilities had to be on floating plant. The subsequent owners of the casino filed for bankruptcy, and the barge is now moored in the Yazoo River near the Ergon petroleum refinery (I assume awaiting scrapping). 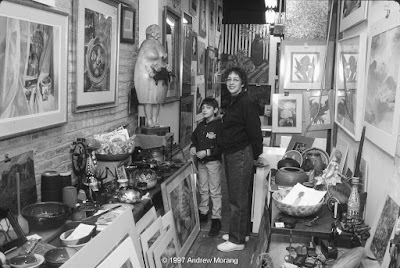 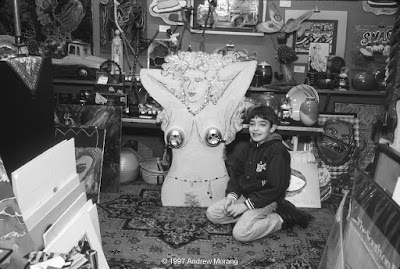 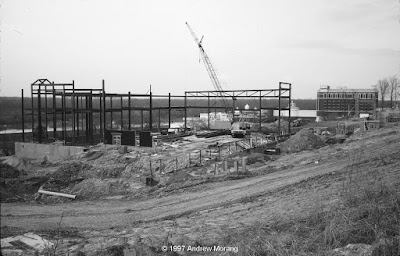 This was the steel framing for the Vicksburg Convention Center on Mulberry Street. 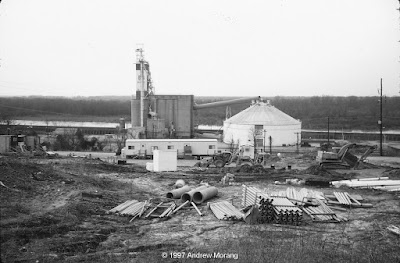 This photograph shows some of the earthwork done for the convention center. The Bunge Corporation grain elevator on Levee Street is in the distance, with the Yazoo Canal beyond. 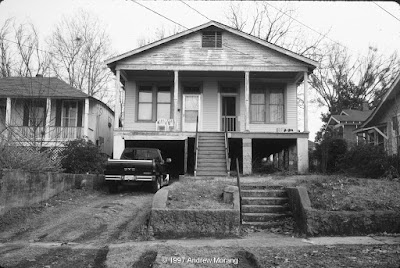 Oak Street is one of Vicksburg's older residential neighborhoods. No. 3517 is an early 20th century duplex. 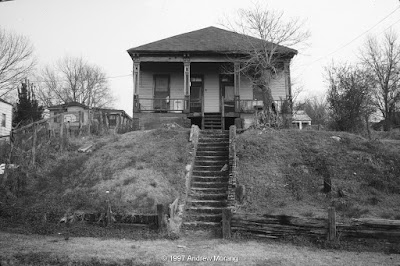 Pearl Street parallels the railroad tracks. This cottage at 2521 was also a duplex and still had the characteristic split porch pillars that can be seen in many older Vicksburg houses. As of October 2016, this building is still occupied. Many other shotgun shacks and cottages that once lined Pearl Street are gone. 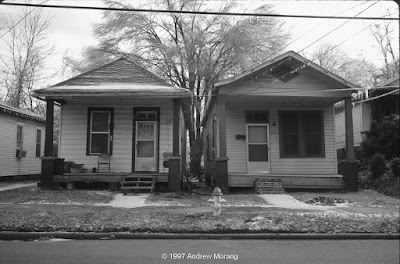 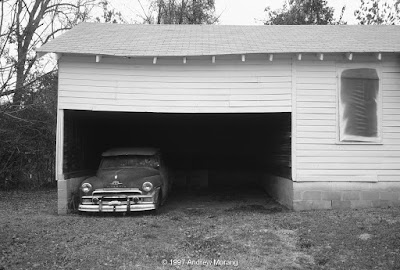 An old Plymouth has been parked in the garage of 920 National Street for decades. I have never seen any occupants, but someone maintains the grounds and house, so it is not abandoned. 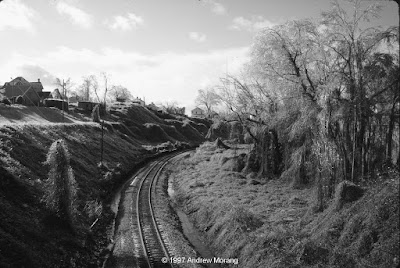 This is the railroad cut between Belmont and West Pine Streets. I took this photograph on Feb. 3, 1997, just after an ice storm draped the kudzu and branches with ice. 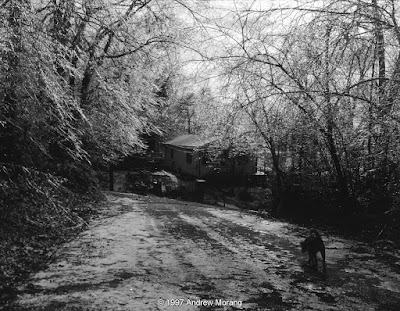 This is North Fisher Street, also draped with ice. 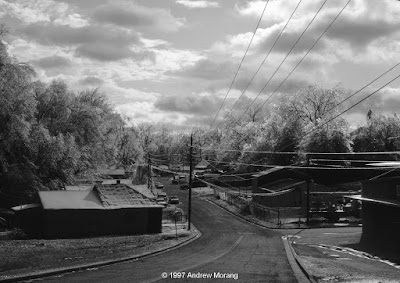 By the time I took this picture of Letitia Street, the ice had already melted from the street. 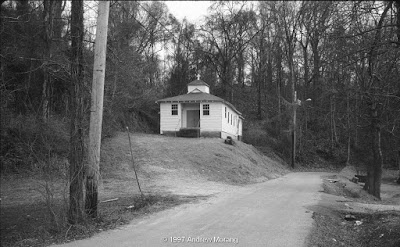 This little church on Yazoo Street was condemned and scheduled for demolition as of mid-2016. 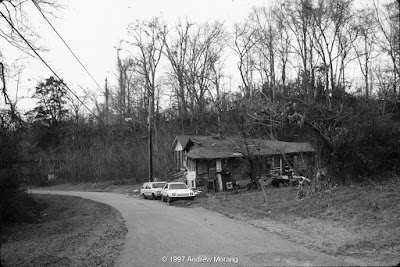 The cottage at 1101 Stouts Street, near the Yazoo Street church, is also gone. 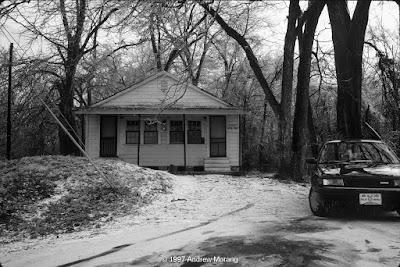 Finally, we have another duplex cottage at 2729 Alma Street. The house no longer exists, and the lot has reverted to jungle.

Sadly, Agfa is gone, another victim of the digital imaging era. The company was founded in 1867 as Aktiengesellschaft für Anilinfabrikation and renamed Gevaert & Co. in 1894. Once a prominent European manufacturer of film, papers, and chemicals, Agfa-Gevaert sold their consumer imaging division in 2004 to a management buyout. But within a year, the new AgfaPhoto GmbH had filed for bankruptcy, ending over a century of top-quality film and paper manufacture. I still use their Rodinal film developer, which was invented in 1891 by Dr. Momme Andresen. Fortunately, Rodinal is still made, now by Adox, another old-line photo company. How many other 120-year-old consumer products can you buy? Freestyle Photographic Supplies in Los Angeles sells Rodinal as well as Adox and other traditional black and white films, but Scala is gone forever. Shoot more film!

All of these photographs were taken with a Leica M3 rangefinder camera, most with 35mm or 50mm Summicron lenses. I wrote about Leicas in a 2014 post.

Posted by Kodachromeguy at 18:05 No comments: