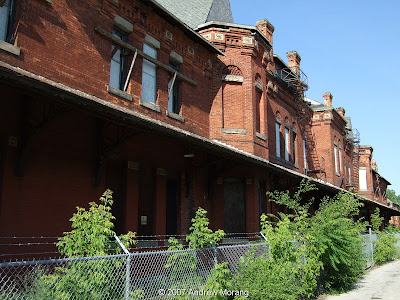 Saginaw, Michigan, was once a prosperous timber and, later, manufacturing city in northeast Michigan. It was founded in 1816 as a trading post on the Saginaw River and grew rapidly throughout the 1800s. The first railroad to enter East Saginaw was the Flint and Pere Marquette, to be followed by other lines as the city's trade and industrial capacity increased. 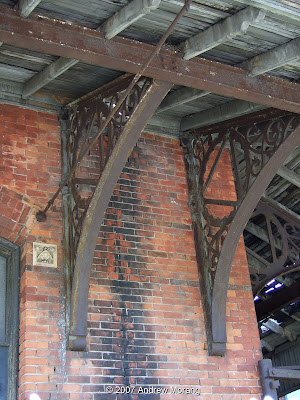 During the height of their power and industry, the F&PM Railroad built a magnificent brick station on Potter Street. I am not sure of the exact date or architect, but the size of the structure attest to the amount of passenger traffic in the 1880s. The detailing and quality construction also attest to a pride of construction and desire to make a lasting monument that we seldom see today. 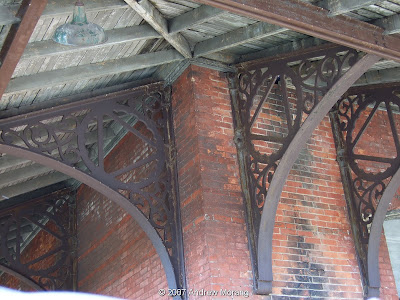 The Potter Street station was abandoned decades ago, and AMTRAK uses a different station in another part of town. Northeast Saginaw is blighted and no development plans have borne results. Sometime in the mid- to late-1990s, the station was gutted by fire. Several groups have attempted restoration, but the great building remains a gutted shell. Some of the towers and walls have been braced to prevent collapse. I fear this fine example of American industrial architecture will continue to deteriorate. 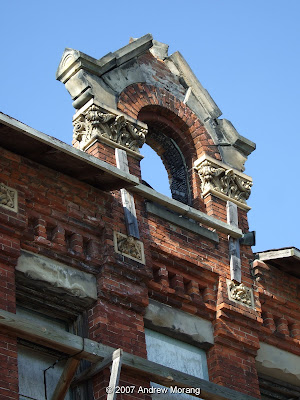 Our race to t6he bottom continues.
Posted by Kodachromeguy at 20:54 4 comments: 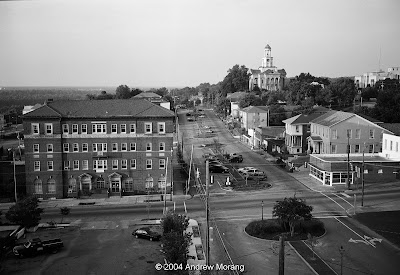 In the early 1920s, Mrs. Fannie Vick Willis Ward donated funds to the Young Men's Christian Association to build a new YMCA facility in Vicksburg. The Junius Ward Johnson YMCA at 821 Clay Street was dedicated in 1923. Fannie, a modest and generous lady, sat in the audience. The new building, a handsome brick structure with a red clay roof, was located at the intersection of Clay and Monroe Streets and in what was then the bustling heart of a thriving commercial and industrial city. Originally the building had only three floors, but in 1925, the roof was removed and a fourth floor with 33 more residence rooms was added. 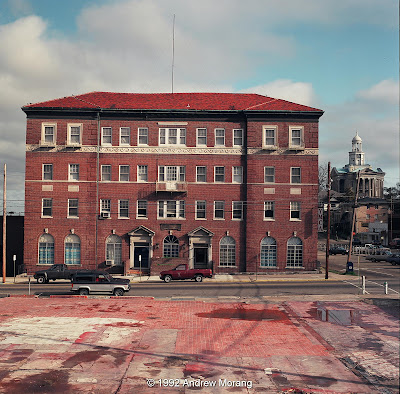 The new building was state-of the art at that time and featured steam radiator heat, bathrooms on each of the residence floors, a gymnasium/theater, and a swimming pool in the basement. The pool was tiled and of the most modern, sanitary construction according to standards of the 1920s. 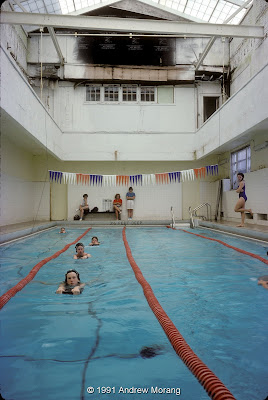 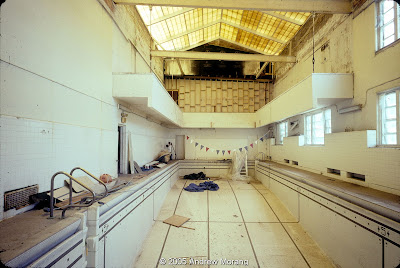 When I moved to Vicksburg in the 1980s, the lower two floors were still regularly used for civic functions. The swimming pool was the only one in town with heat for winter use. I do not know the original configuration of the locker room. A ladies changing room had been added, but this would not have existed in the 1920s.
The 3rd and 4th floors were the residence floors, where young gentlemen could rent a modest and clean room for weeks or months. This was a common practice in the early-mid-20th century and was less expensive than staying in a hotel. My father lived in YMCAs in the 1930s and 1940s in Providence, Boston, New York, and other cities for periods of weeks at a time. 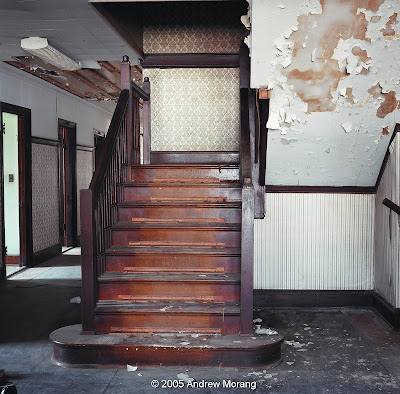 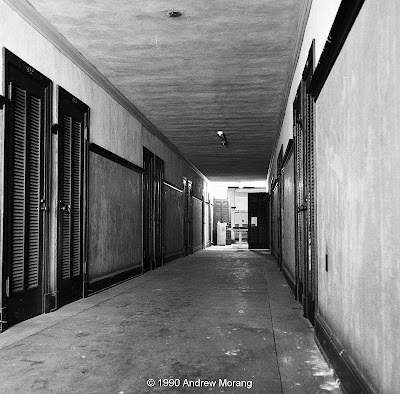 Up through the 1970s, it was still common practice for single men newly-hired at the Waterways Experiment Station to live in the "Y" for months or sometimes years. They had to dine somewhere else, a service that was fulfilled by boarding houses in the vicinity. The normal pattern was for the young gent to eventually meet a young lady via church, sports, or club activity, get married, and then move to a suburban house. The gentleman in the photograph below is a former resident. He was an earthquake mechanics scientist in the Geotechnical Laboratory. 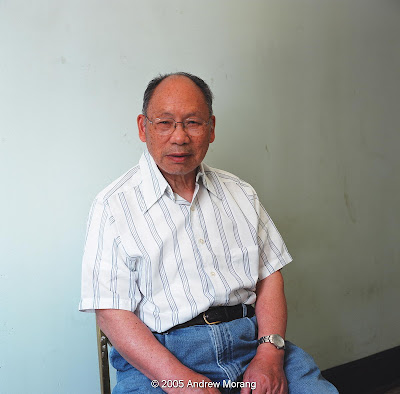 Another friend and coworker said when he moved to the "Y" in 1968, the rent was $30/month. For breakfast, many of the gents went to Crawley's Pool Hall, which put on a generous spread for $1. In the evening, they ate at the Glass Kitchen for a home-style $1 dinner or at other downtown eateries. Every night from 7-9 pm, a basketball game was open to anyone, after which the guys would go out to a bar for a beer. At that time, there were numerous bars downtown. 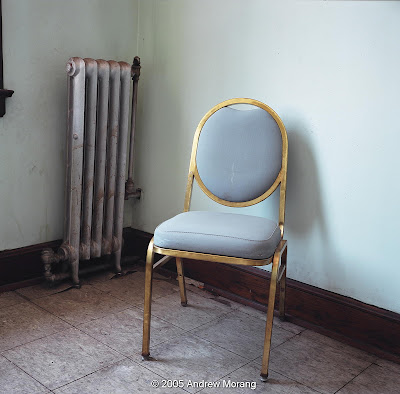 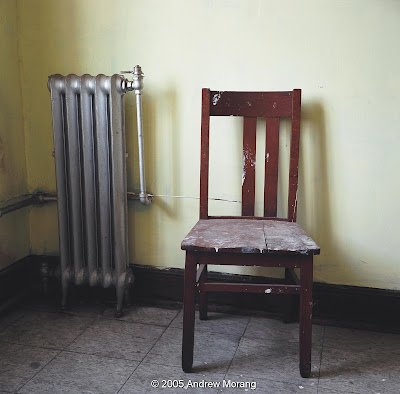 On our contemporary standards, the residence rooms are tiny, cramped monk's cells with a narrow bed and one electric outlet. The one tiny closet would barely hold our clothes, let alone all the other junk we drag around as part of our modern lifestyle. The rooms were not air-conditioned, but the doors had wood louvers. In hot weather, hall fans provided a constant breeze, and by leaving a window open, a breeze would keep the rooms bearable (on pre-1970s standards). 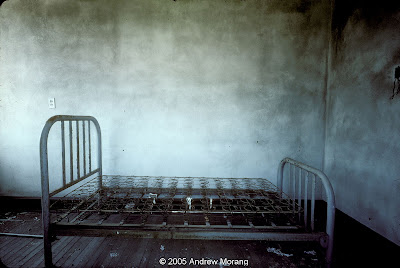 The Junius Ward residence floors ceased operation between 1978 and 1980. First the upper 33 rooms on the fourth floor were closed and then finally the third floor, the result of increasing competition from apartments around town. With lack of use, this part of the building deteriorated steadily thereafter. 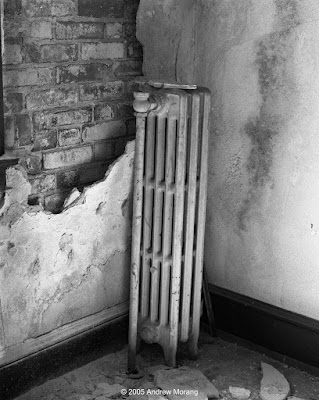 Vicksburg YMCA moved to a new location in 2002 and sold their historic Clay Street building to a Nashville developer, who planned to convert the space to condominiums. The plans never materialized, and the building remained unoccupied until about 2003 or 2004, when Keystone Ministries moved in. Pastor James Hartley kindly let me take photographs at that time. The ministry did some renovations but the building needed too many repairs for them to be able to continue. Since about 2006, the building has been unused. Several potential developers have looked, but the cost of renovations has scared them off. Before it could be reoccupied, it would need fireproof stairs, major roof repair and other significant upgrades. It languishes empty, slowly crumbling. 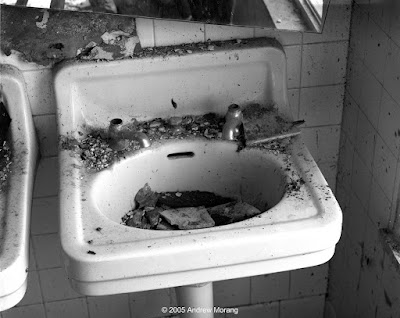 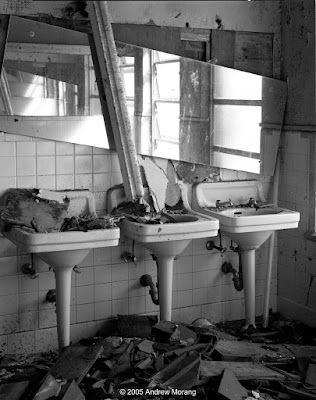 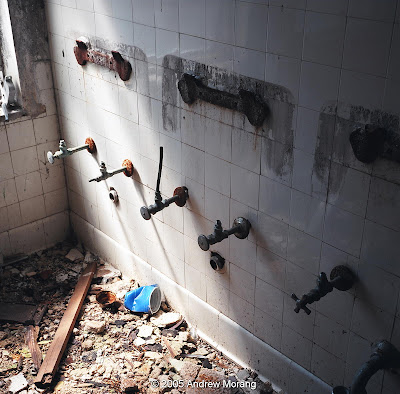 Photography technical notes:
Click any photograph to enlarge it. Thank you to many Vicksburg friends who provided information and history.

UPDATE: November 2019, the old Y remains empty with no signs of activity or renovation.
Posted by Kodachromeguy at 20:47 1 comment: 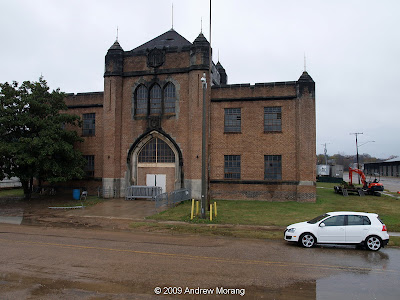 The historic Hinds County Armory is located on the State Fairgrounds in Jackson. Most people never see the building and it stands unused and neglected. Mississippi Heritage Trust describes this unusual building (http://www.mississippiheritage.com/list09.html):

"Completed in 1927 for the Mississippi National Guard, the Hinds County Armory is believed to be the oldest surviving 20th century armory in the state. It may be the only building from that era intentionally built as an armory. The National Guard used the building as a training facility for nearly 50 years. The armory was one of the primary mobilization sites for Mississippi troops who served in World War II. Many returning soldiers mustered out in the armory. It is one of the state’s finest examples of Gothic Revival architecture and one of the few secular buildings employing the style."

"The building was damaged in Jackson’s 1979 Easter Flood and has not been used since. The roof leaks, and the building continues to suffer from water damage and a lack of maintenance. Located on the state fairgrounds, the Mississippi Fair Commission has no current plans for the structure." 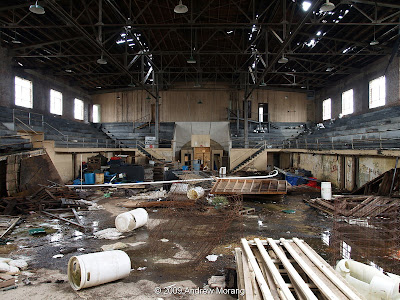 It was a handsome building, but as you can see from these photographs, it is in poor condition. The roof is collapsing and much of the wood flooring and stage has rotted. I toured one rainy day, and the water was pouring through the roof onto the debris below. It is sad or rather, disgusting; many servicemen must have memories of passing through this facility many years ago. What an outrage that the State will not take care of its property. And what happened to the $100,000 grant from the Mississippi Department of Archives and History back in 2002 to fix the roof? Who benefited from these funds? 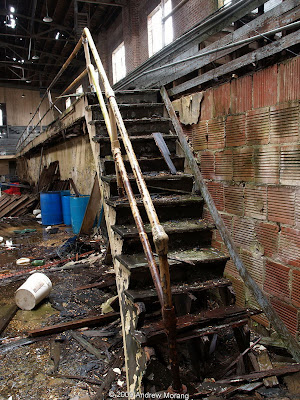 Photographs taken on 12 December 2009 with an Olympus E-330 camera and 14-54 mm lens, tripod-mounted. I also took some Kodachrome slides with a Leica film camera.
Posted by Kodachromeguy at 13:54 4 comments: