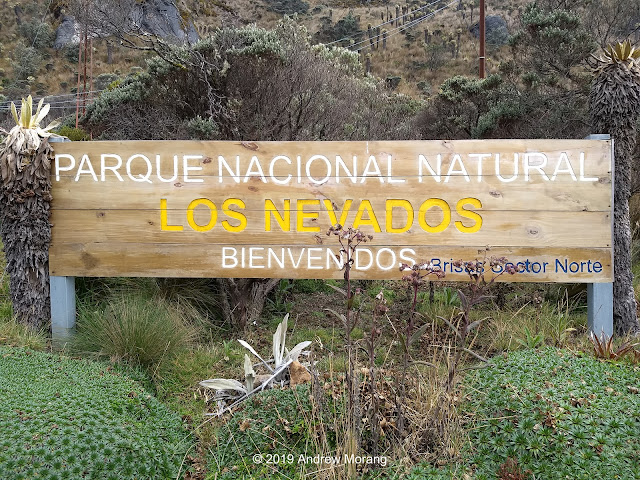 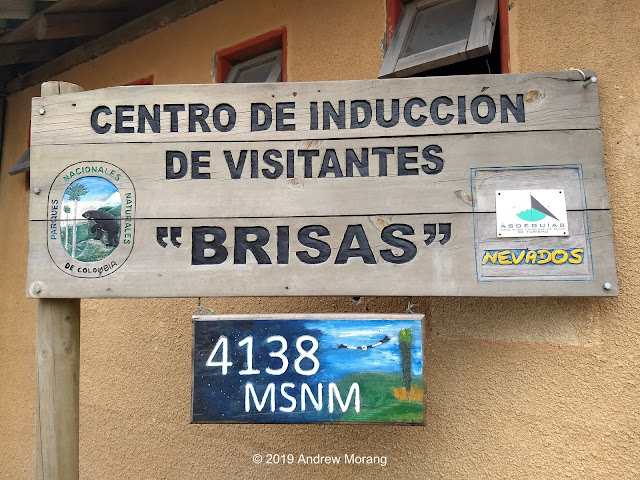 We were amazed; humming birds live and thrive at 4100 m (13,500 ft) elevation in the Parque Nacional Natural Los Nevados. Obviously, there are enough blossoms with nectar to sustain these little guys. They definitely do better than we sea-level-sissy tourists do in this thin air. But, surprisingly, none of us got sick or even felt particularly fatigued. 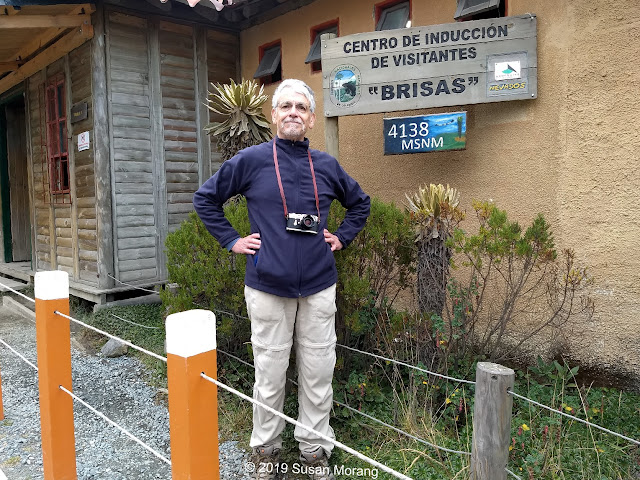 The visitor center served us coca tea (mate de coca), which is supposed to reduce altitude effects. But I looked at the package ingredients, and the amount of coca was so minuscule, it really was just over-sweetened tea. Oh, well. 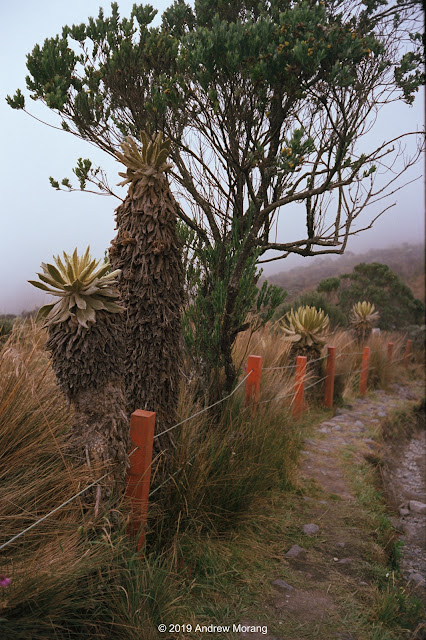 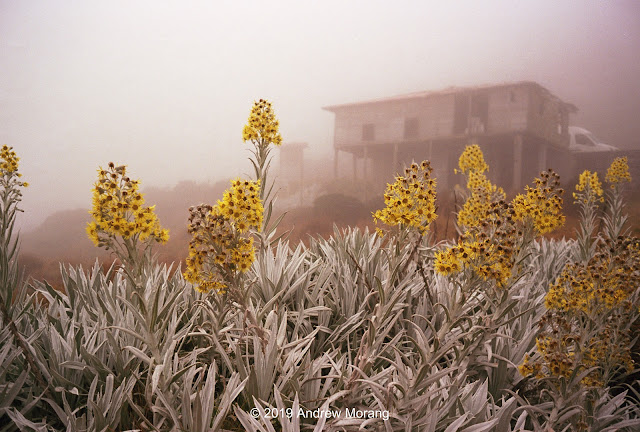 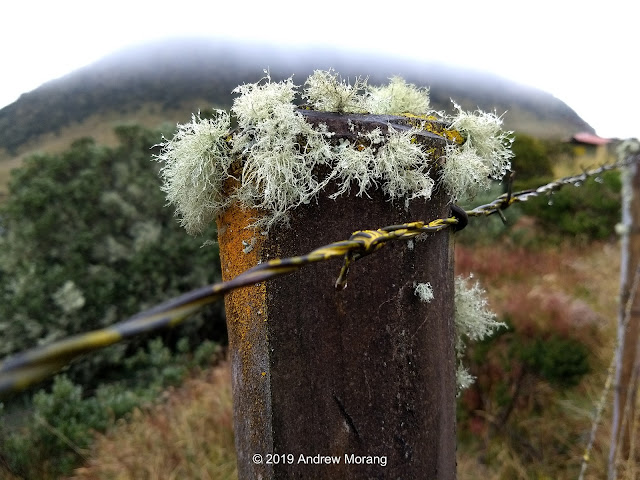 The plants up here in the mists are quite spectacular - unusual succulents, lichens, and fungi. The fog and drizzle blows in and out, revealing an amazing garden of unusual plant life, bathed in the soft light. 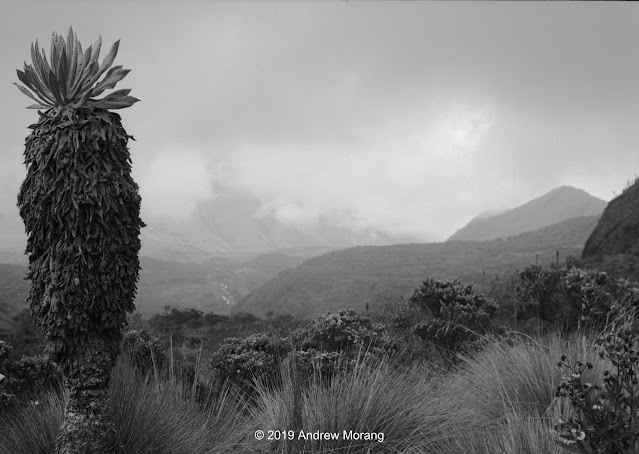 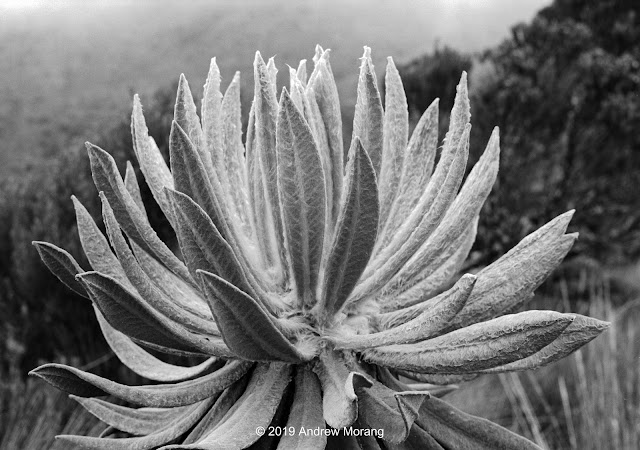 In color, the light is mellow. In black an white, it is almost ominous. 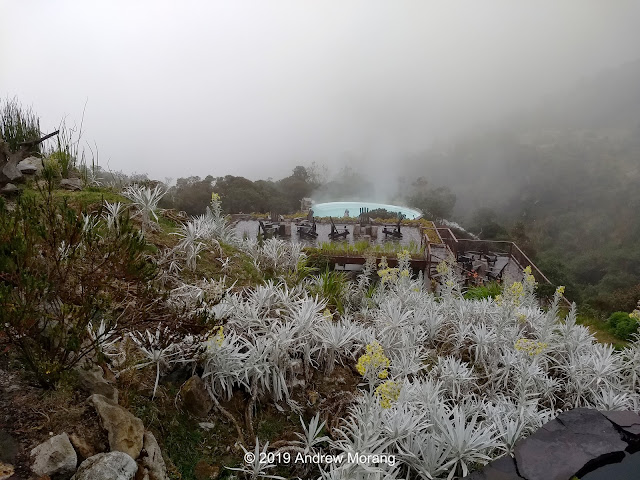 We stayed at the Hotel Termales del Ruiz, which is built literally over a hot spring. The oldest part of the complex was built in 1937, and during the post-war era, thrived as a ski center and hydrotherapy center. Being at 3500m elevation (11,500 ft), the air is brisk. The accommodations were very nice; the restaurant was OK needed a bit of organization or efficiency management. The hot pools were divine. 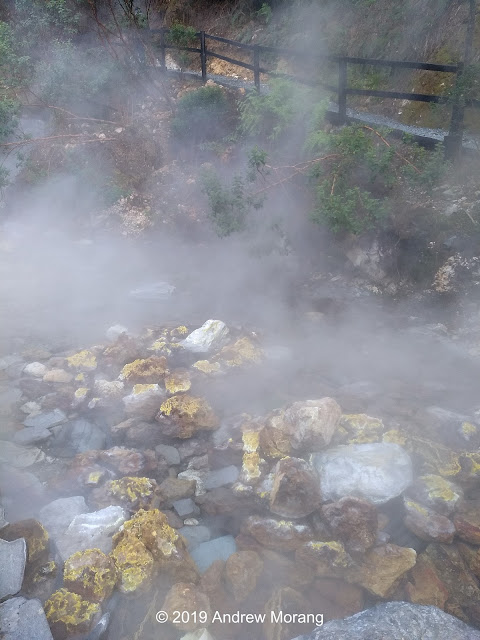 The area boasts 14 different hot springs, varying in temperature between 28º and 91º Celsius, with waters of different chemical conditions.
This ends our short sojourn on the Los Nevados volcano. The hiking trails to the summit area were closed when we were there due to active volcanism, but I would like to return some day to do some hiking (there are a thousand places to which I would like to return some day....).
The black and white photographs are from Fuji Acros film exposed with a Leica M2 camera.
Posted by Kodachromeguy at 21:30 3 comments:

We spent a few nights in Manizales. This is a fascinating town perched on a ridge-top, the capital of the Department of Caldas, and near the Nevado del Ruiz volcano. The ridge runs approximately east-west, and to the north and south, the mountain drops off steeply. How did anyone choose to build a town here at about 7,000 ft altitude? Was there dependable drinking water?

The roads are twisty and windy, really interesting. To save us from a seep mountain ascent and (uurp) car-sickness, our van left us at the bottom terminal of the Cable Aereo Manizales aerial tramway. Thousands of commuters use this daily to get to and from work or school. Most of us associate a tramway as having a bottom and a top station, as on a mountain resort, but this one has intermediate stations. Think of a subway where you can get off or on at any station you select, but instead you are up in the air.Tramways have operated in the city since the 1920s, but this one was built by Leitner Ropeways and inaugurated in 2009. In ten years, it has carried 30 million passengers. It can also carry victims of medical emergencies. Tramways are slowly becoming more common in hilly cities that have traffic problems (e.g., almost any modern city). Even Ankara has an aerial tram today.I told you the side streets are steep.
We walked along the main shopping street, Carrera 23, towards the cathedral. The place was packed with wall-to-wall people. Latin towns are like this at dusk; people are out forgathering, enjoying the end of the work day, and seeing and being seen. 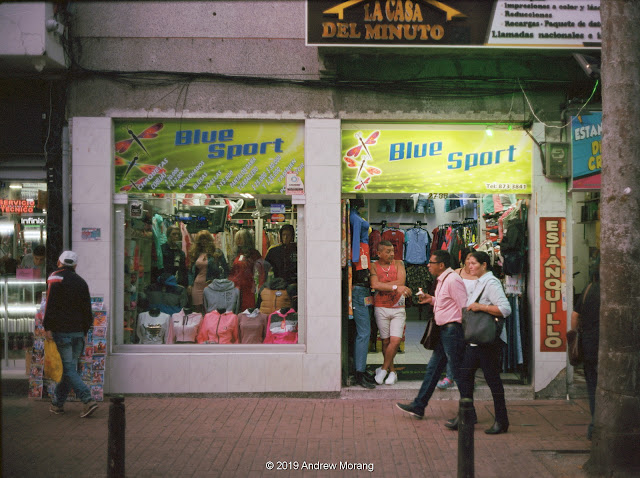 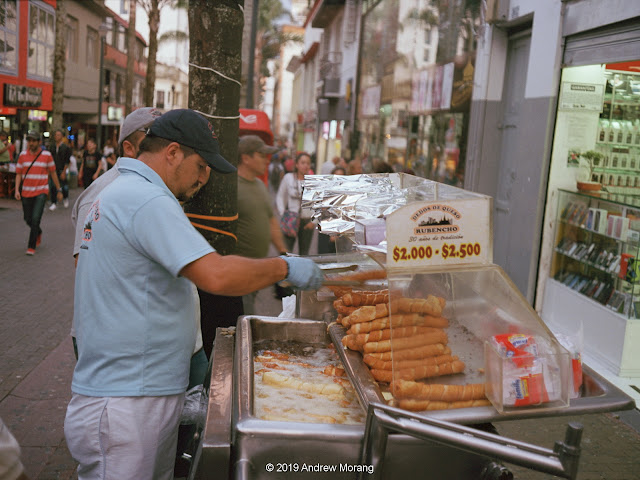 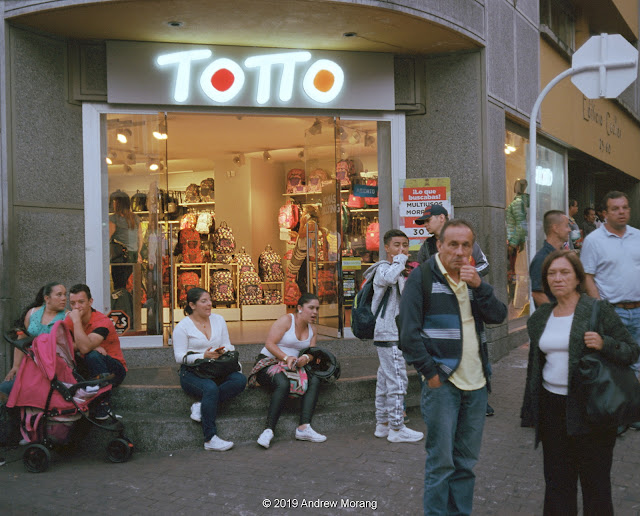 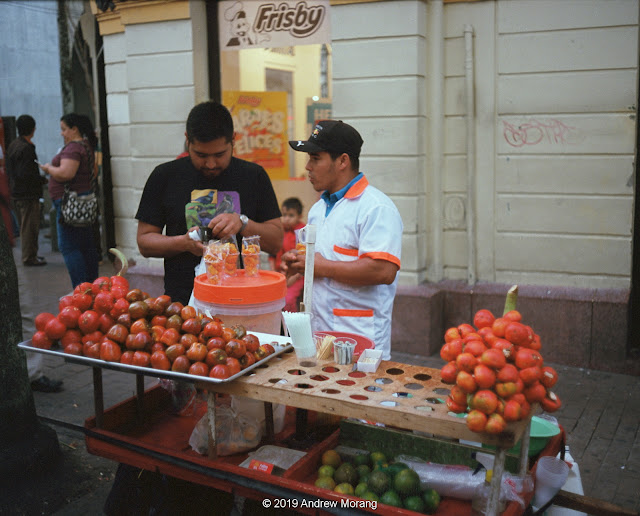 Stores and sidewalk vendors sold all sorts of merchandise, clothing, electronics, foods, and drinks. No one paid any attention to us. "Oh, some more doofy tourists." 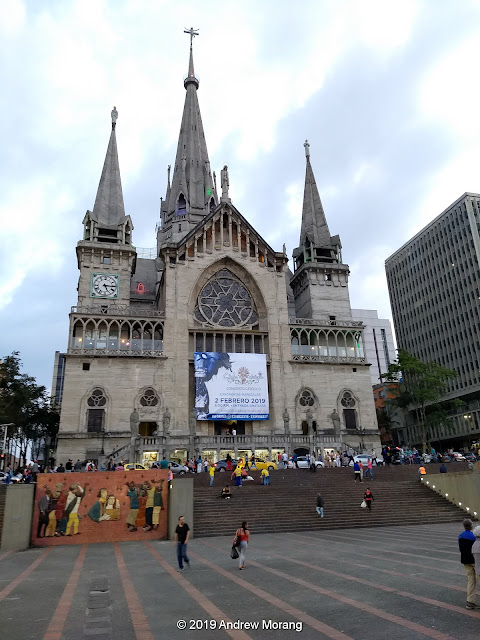 The neo-Gothic Catedral Basílica Metropolitana de Nuestra Señora del Rosario dominates the Plaza de Bolívar downtown. It is an unusual reinforced concrete structure, begun in 1929 and completed in 1959. The height of 106m for the top of the tower places this cathedral in a ranking of tallest churches in the world. Unfortunately, it was too late in the day for us to climb up into the tower to the balcony. 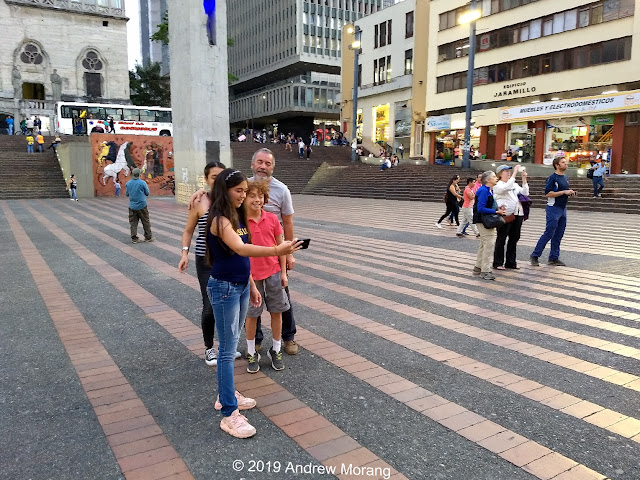 Who takes selfies in front of the cathedral? Answer, everyone.
Dear Readers, this has been our short visit to Manizales. It is an interesting city with an innovative means to address the topography and traffic issues. On your next trip to Colombia, make a point to visit Manizales.
Posted by Kodachromeguy at 08:00 1 comment:

Guadalajara de Buga, in the Valle del Caucais department, is a mid-size city in the central valley north of Cali. It is one of the oldest cities in Colombia, having been founded in 1555 by Giraldo Gil de Estupiñán. 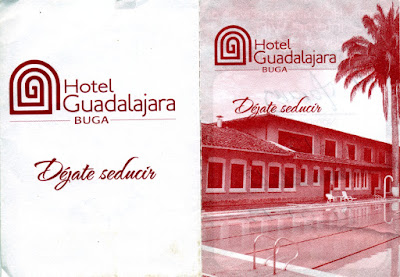 We stayed a night after descending from birding in the coastal mountains. The rest of the group left at 06:00 to look at birds in the reservoir and wetlands, but we decided to enjoy a luxurious breakfast and explore the city. The Hotel Guadalajara Buga, a historic hotel from 1954, was really nice - I like roughing it like this. 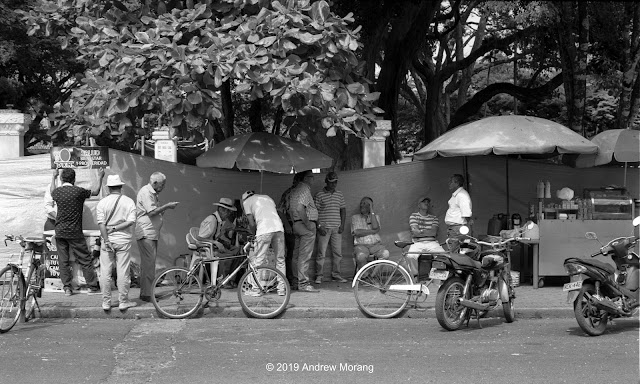 We walked downtown along Carrera 14 towards the Parque, Jose Maria Cabal. This is a busy place! Folks were out enjoying the good weather, chatting, eating, sharing stories, and just hanging around. 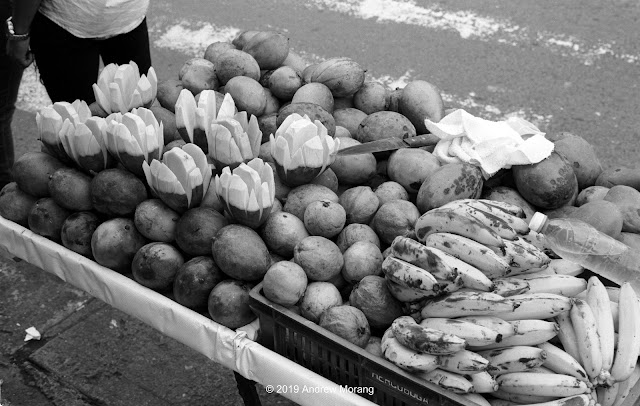 Of course, there were plenty of vendors with produce of various sorts. 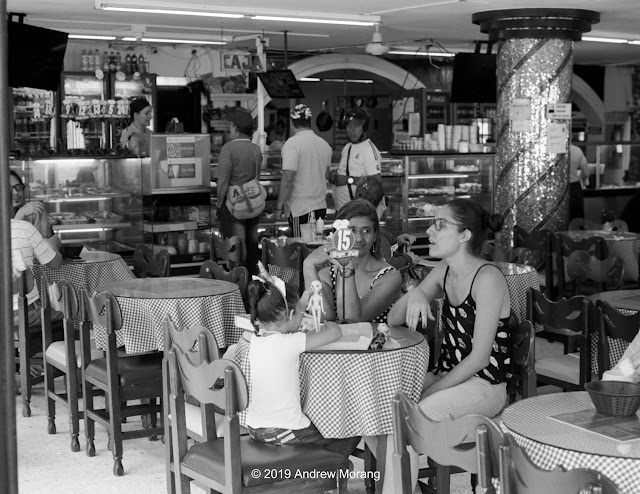 Mid-morning, quick, what do you do? Drink a Colombian espresso, of course.
This town is bustling with commercial activity. But stay off the street when the motor-scooters are buzzing towards you! I almost got smushed once.
The Basilica of The Lord of the Miracles is an impressive pink complex of buildings and church. It receives 3 million pilgrims every year. We walked around and looked at the crypts. 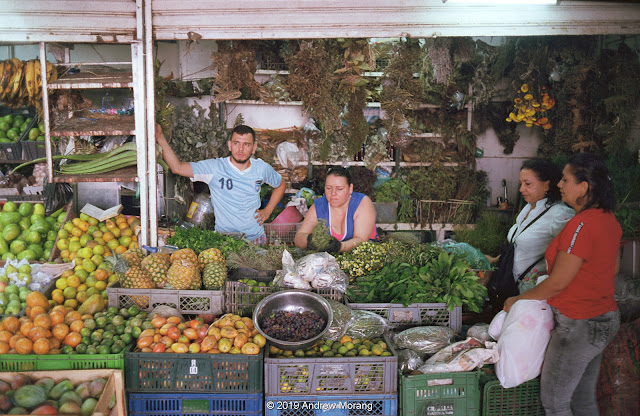 When most of you read this, it will be winter in North America and Europe. You will not be seeing a fruit and vegetable stand like this for a long time. Savor and think about the flavors of ripe produce, real food.
I love exploring thriving towns like this. And I like to see all the street activity.
Most of the photographs are from Fuji Acros 100 film, exposed through my Leica M2 camera with 35mm and 50mm Summicron lenses. I use a Gossen Luna Pro Digital light meter in the field to measure exposure. The fruit vendor is Kodak Ektar 100 color film from a Yashica Electro 35CC camera. Click and photograph to expand to 1600 pixels on the long dimension.
Stand by for more Colombia photographs and thank you for following along..
Posted by Kodachromeguy at 08:00 4 comments:

Santiago de Cali (sanˈtjaɣo ðe ˈkali], or Cali, the capital of the Valle del Cauca department, is a bustling city in southern Colombia. We only spent a couple of days there before heading into the mountains, but I took advantage of the time to wander around and check out the scene. 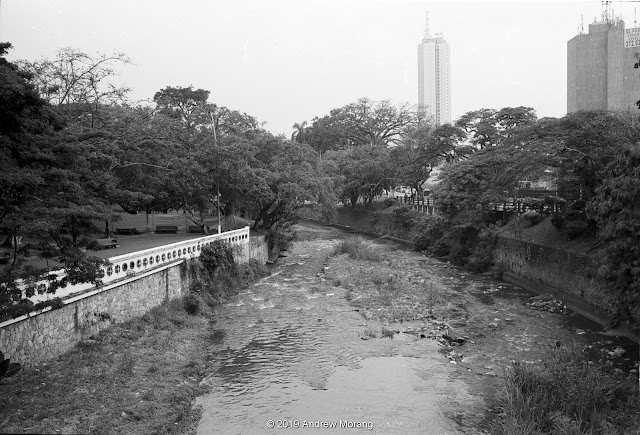 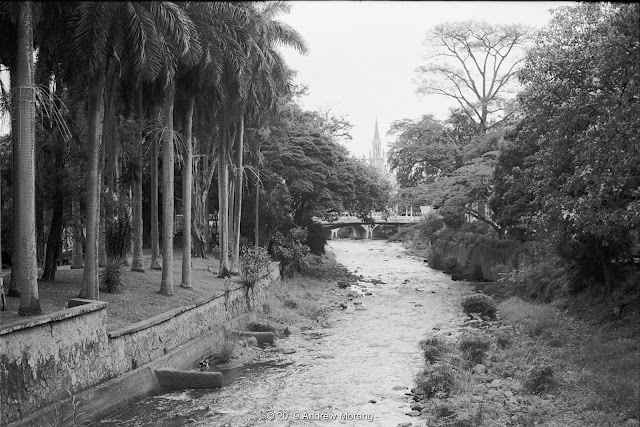 The Rio Cali flows through the center of the city and offers walking paths and a venue for the famous las novies del gato ("the cat's girlfriends") art park. 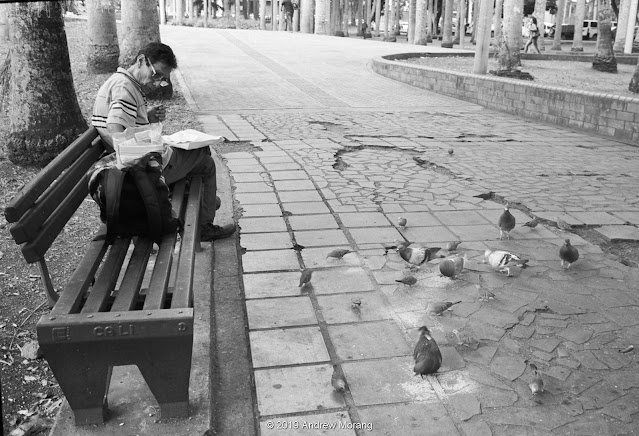 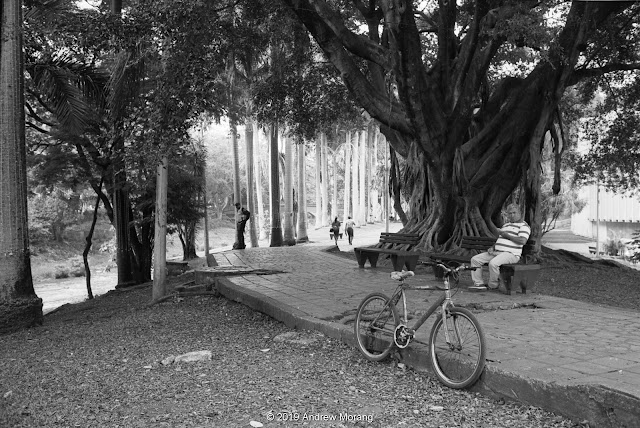 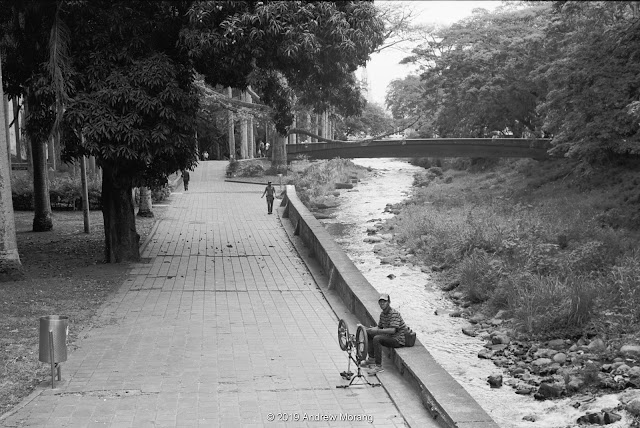 We were warned not to walk along the river at night, but the scene in daytime was pretty mellow. In the Parque Simón Bolívar Cali, people walk, bike, skateboard, read, and feed the pigeons. It was reasonably clean and well maintained. Nice spot, but not much water flow when I was there.

Oddly, a large municipal office building complex is in the park, the Subdirección de Catastro Municipal. People were lined up in what looked like very frustrating lines. I wonder if some of them hire line-standers?
The men with old-fashioned manual typewriters interested me greatly. Citizens with multi-page forms hire a typist to complete these forms. Then the citizens can submit them to the appropriate office in the municipal building. Some of the typists were using carbon paper to make duplicates (do any of you "mature" Urban Decay readers remember carbon paper?). I have seen similar typists in Cuba and Tanzania. And decades ago, I remember letter-writing professionals outside of post offices in Turkey. People who could not write hired a professional and then immediately mailed their letter at the post office.
Yes, the traffic is dense. But the drivers were very observant of traffic lights and pedestrian crossings. And I think the street condition was better than in many American cities.
Heading back to the hotel, what to do? Stop for a coffee, of course. The Centario Mall had a nice sitting area in the atrium.

I am sure every tourist is taken to the 26-m statue of Cristo Rey (Christ the King), located west of Cali on the Cerro de los Cristales in the village of Los Andes. It is a steep ascent past nice suburban neighborhoods and shantytowns. According to Wikipedia,

On Sunday October 25, 1953, the statue was inaugurated at its summit an image of Christ in celebration of the fifty years following the end of the War of a Thousand Days. It is made of iron and concrete, with a mass of 464 tons and a height of 26 m, of which 5m belong to the pedestal.

More exploration to follow. For articles 01 to 04, please type "Colombia" in the search box.

These photographs are from Fuji Acros 100 film exposed with my Leica M2 camera with 35mm and 50mm Summicron lenses. I scanned the negatives with a Plustek 7600i film scanner.

Posted by Kodachromeguy at 08:00 4 comments: