Naval Station Norfolk covers about 3400 acres and is the largest naval station in the world. It is an immense complex of wharfs, warehouses, barracks, repair shops, hangars, offices, and runways. Thousands of servicemen, servicewomen, and civilians enter and leave every day as they do their work supporting fleet operation, repair and overhaul, and administrative duties. The base began operations in World War I and has been in continuous operation since then. You can read more about the base in Globalsecurity.org:

http://www.globalsecurity.org/military/facility/norfolk.htm
History of the facility is here: 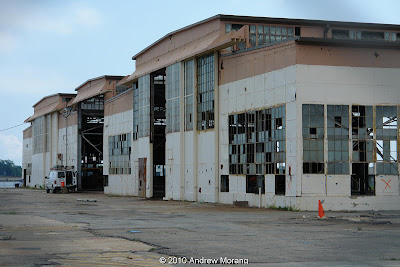 In 1940, with war imminent, the government dredged Willoughby Bay just north of the base and built hangars for seaplanes. I think the hangar in the photographs above is one of the 1940 units but am not sure. I saw workers inside but it was a hard hat area and I could not enter. 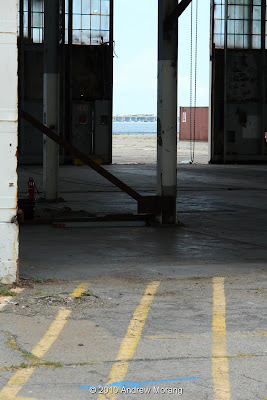 Looking through the building, you see Willoughby Bay through the hangar doors. The wharf facing the bay now has steel sheet pile bulkheads, but in the 1940s, there must have been ramps to allow seaplanes to be winched into the hangar. 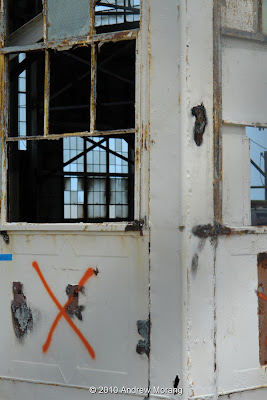 The building consisted of steel girders and steel panels, assembled like a giant Meccano construction kit. I wonder if it was custom made or if some hangar company sold units in various standard sizes (the 100-ft unit, the 200-ft unit, etc.)? 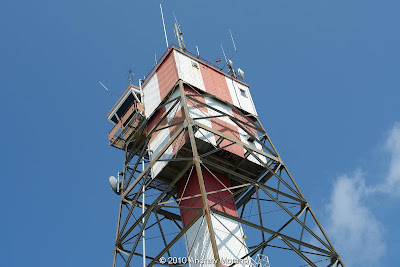 At the northern tip of the base is the old degaussing station. Degaussing is a process to reduce the magnetic signature of a steel hull. The tower was formerly housed control building for the process but has been converted to some new test equipment (of undisclosed function).

(All photographs taken with a Sony R1 digital camera)
Posted by Kodachromeguy at 20:39 No comments:

South Nags Head is a summer playground of sun, surf, beer, and jolly good times. It's also an area of uncontrolled overbuilding on the rapidly eroding barrier island. These cottages on East Seagull Drive have been condemned because they are in imminent danger of collapsing into the surf. The view above is looking to the north, with the Atlantic Ocean to the right.The dune line is well landwards of the cottages. 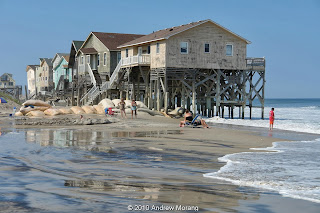 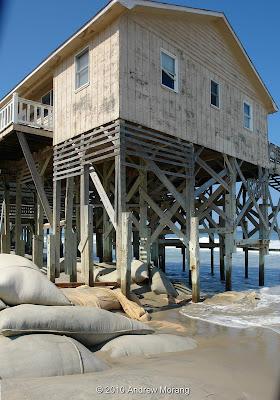 The cottages were originally built on piles because in this environment, occasional flooding is inevitable. But as you can see in the photograph above, the beach has eroded so severely, the original piles were undermined. To keep the houses from collapsing, extension piles were added below the original ones. The bags are geotubes filled with sand to protect the houses. North Carolina law only allows such bags when a house is threatened. Also, North Carolina no longer allows any hard structures like rock seawalls to be erected as shore protection devices (Update: this may no longer be true as of 2020). I wish other states would follow this example.


When the septic tanks are exposed (the concrete tubs above), the town or county condemns property. But then a major problem arises: what to do with the structures? FEMA formerly funded removal of houses, but I was told that the program ended. The town is taking legal action against the homeowners to remove them, but the town will not pay any of the costs. If the owners walk away and the structures collapse, the town would have to foot the bill for hazardous debris removal, not a trivial issue in the marine environment. Consider also that taking over the properties would not yield a salable commodity for the town. The town might do a beach nourishment to add enough sand to un-condemn the houses. Then they would be back on the tax rolls and generate revenue. It is an odd twist of logic.

Notice that even though only five years have passed since the disaster of Hurricane Katrina, we still are politically too cowardly to ask serious questions about whether people should live in hazardous locations, and whether municipalities have a responsibility to provide protection and services to residents of these hazardous areas.

These are all troubling questions. 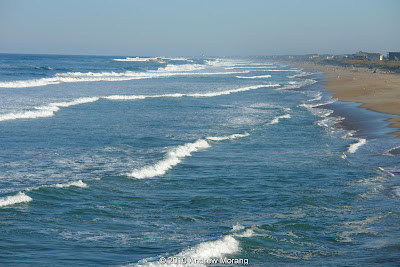 The scene above shows swells from Hurricane Danielle on August 29, 2010. I took this photograph from the U.S Army Corps of Engineers' Field Research Facility (FRF) pier at Duck, NC. They are about 9-10 second period and approaching the coast at an unusually steep angle. The FRF has an excellent web page with live cameras, wave statistics, and other oceanographic data:

Posted by Kodachromeguy at 22:06 6 comments: