The shotgun house is a narrow rectangular domestic residence, usually no more than 12 feet (3.5 m) wide, with doors at each end. It was the most popular style of house in the Southern United States from the end of the American Civil War (1861–65), through to the 1920s. Alternate names include shotgun shack, shotgun hut, and shotgun cottage.

The examples in this essay are from Main Street, downtown Vicksburg. 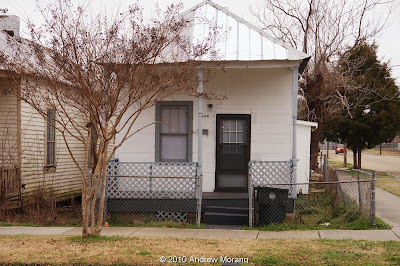 Often, shotgun shacks were built by a developer in a cluster to house factory or farm workers. This group of five on Main Street is one example. Sometimes shotgun shacks were built on a double row facing a short, dead-end road known as a court. Several years ago, I spoke to an elderly gent who remembered when the courts were teeming with families. In the morning, a truck would come around and pick up the men to take them to farms. The women often did domestic jobs in town. In the evening, the trucks would return with the men and the families would get together again. 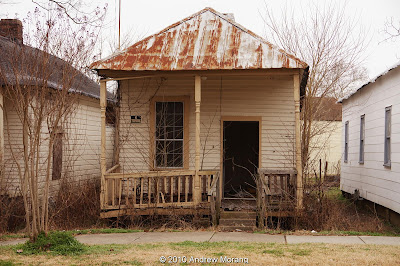 When I first moved to Vicksburg in the 1980s, there were still dozens of shotgun shacks in the older parts of town. As the years passed, many succumbed to fire or demolition. The house at 1402, the second photograph, was destroyed by arson on February 23, 2010, only a few weeks after I took the photograph. 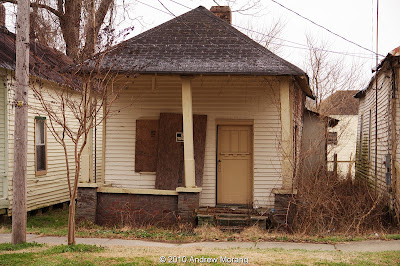 In many ways, these little houses are not well suited to modern residential patterns. They are small, and most people want more space now. Because they have a lot of surface area in proportion to their volume, they are high maintenance. And with thin walls and post foundation, they are hard to heat in the winter and expensive to cool with air conditioners. Often they were rental units in low-income areas, and maintenance was neglected. In some places, two units have been joined with a hallway, but they still end up being high-maintenance homes. 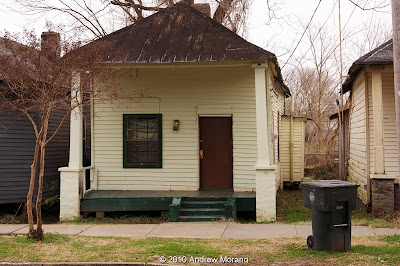 In the early 20th century, there must have been hundreds of thousands of shotgun houses throughout the South. But we are losing these characteristic forms quickly. Near the Martin Luther King memorial in Atlanta, two or three have been restored and are on display. I was amused to see how many tourists were curious to see them. Then I realized that in the last few years, so many have disappeared, possibly many suburbanites have never seen one up close. 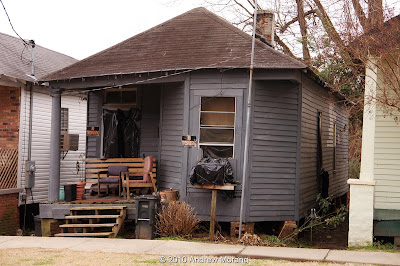 In the future, I'll post more photographs of shotgun houses from other neighborhoods. This group was photographed in January, 2010.
Posted by Kodachromeguy at 11:45 1 comment:

Mound is a farming community just north of Interstate 20 about seven miles west of the Mississippi River. During the early 20th century, a gent named George Yerger owned the land, which then was well-populated with tenant farmers. Like many farming centers, it once had a railroad depot, which served as the link with the outside world in an era before many people had motorcars. 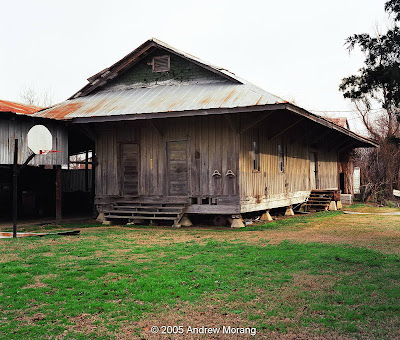 The depot in Mound was a 1-story wood building with wide eaves to provide protection when material was loaded and unloaded from rail cars. The depot probably dates to the early 1900s, but a January 2005 article in the Vicksburg Post did not list an exact date. It had not been in use since before 1958. 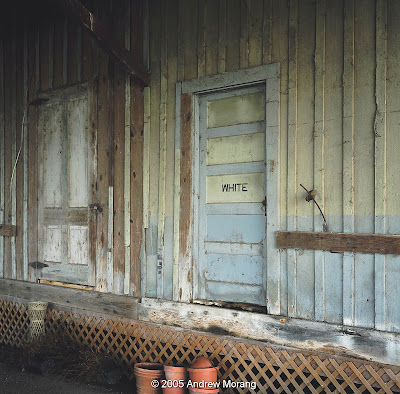 The depot was unusual in that it still had White and Colored labels on the doors. Considering how common this practice was up through the 1960s, it is surprising how seldom you see signs like this now. Sadly, the depot is gone. I do not know who bought it and if it was moved or demolished. 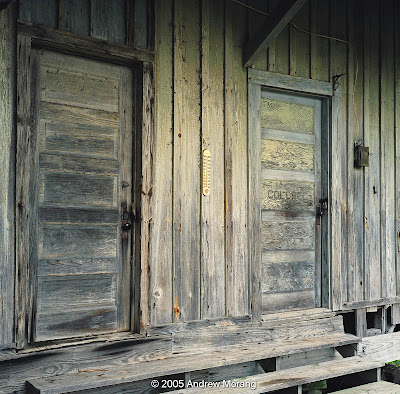 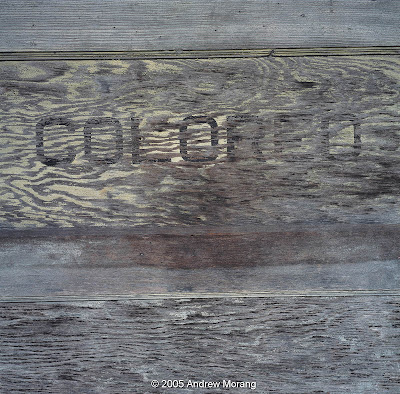 The elegant little green shotgun shack is the only one left on the property. There were probably many in the early 1920s to house farm workers. A reader stated that this was used as a doctor's office by Dr. John Yerger in the early 1900s. 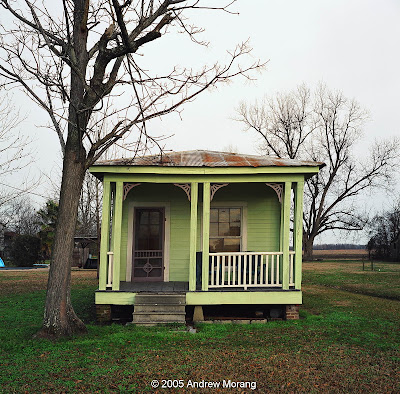 The clapboard farm building is a typical example for farms in the South. 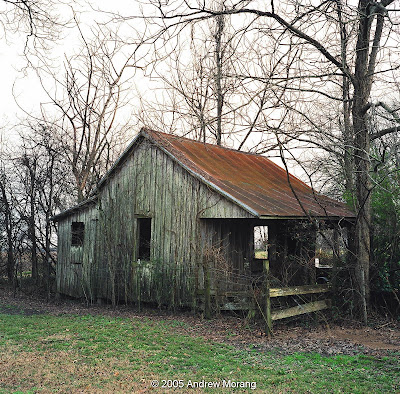 All photographs taken on Kodak Ektar 25 film with a Rolleiflex 3.5F camera with 75mm f/3.5 Planar lens (5-element version), tripod-mounted. Ektar 25 was the finest resolution color negative film ever made. The negatives were scanned on a Noritsu professional system.
Posted by Kodachromeguy at 21:36 6 comments: