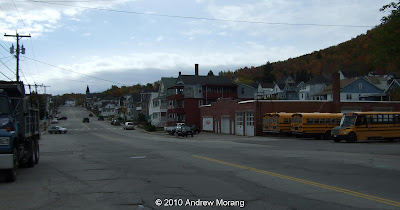 Berlin is a mill and paper town on the Androscoggin River in northern New Hampshire. Situated north of the White Mountains, it is about four hours drive from Boston and seems to be far away from anything. 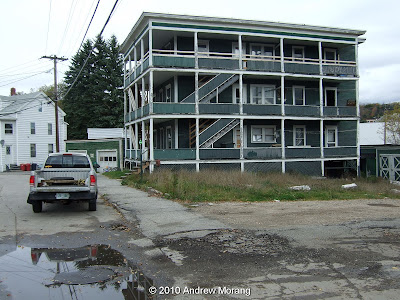 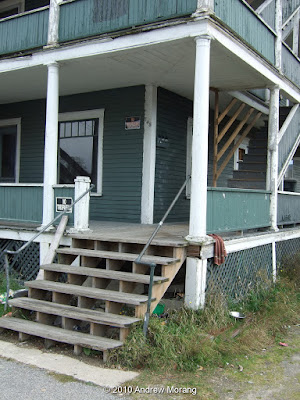 Berlin was once a thriving industrial city. Prosperity in the early 20th century came from timber harvesting, lumber mills, and paper factories. Workers were a mix of ethnic groups, with many being French Canadians. Many families spoke French exclusively, and schools taught English a foreign language. Sadly, since World War II, the town has been on a steady decline, and a large paper mill closed recently. 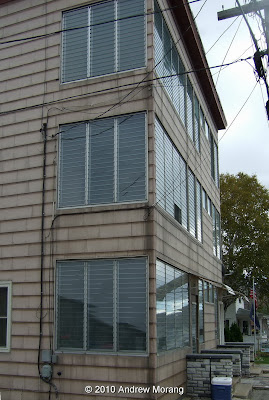 Immigrant families lived in wood double- and triple-deckers. You find this type of semi-mass-produced housing in former industrial cities like Philadelphia, Baltimore, and Boston, but the architectural style was also used here in New Hampshire. I don't know how residents heated in the past; possibly boilers in the cellar used coal (brought in by railroad). Life in these tenements must have been dreary, but at least the men and women had jobs and dreamed of a better future. Some participated in winter sports. In 1882, a group of Scandinavians founded the nation's first ski club, named the Nansen Ski Club in honor of Fridtjof Nansen, the explorer who in 1888 skied across Greenland. Today, much of this housing stock is seedy and many units are empty. 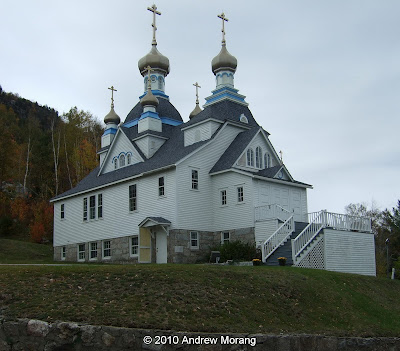 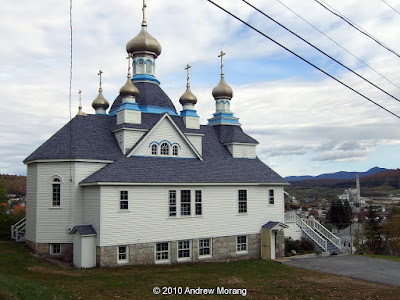 You can still see elements of a prosperous past. The beautiful Holy Resurrection Orthodox Church overlooks the city from the west side of the valley. 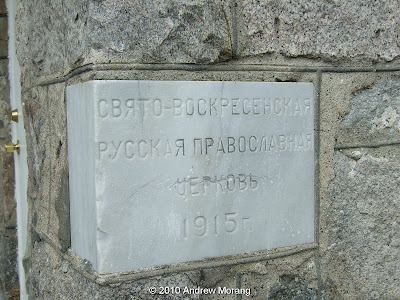 It's interesting that the cornerstone was laid before the Bolshevik revolution.

July 2015 update: a friend sent me an article from the April 25, 2015, Conway Daily Sun,  The article states that the church was built by Russian immigrants who came to Berlin in the early 1900s to work in paper mills. By 1915, there were 300 Russian men in town, and in March of 2015, Father Arcady Piotrowsky of Cleveland was assigned to Berlin to help found the Holy Resurrection Russian Orthodox Greek Catholic Church. (They liked long names then.) The church's icons may have been some of the last to leave Russia before Czar Nicholas II was overthrown. During the 20th century, the parish dwindled, and  the church closed in 1963. It remained empty for 11 years. In 1974, a family of one of the original founders asked to hold the funeral service at the closed church, and parishioners refurbished the domes and paintings. The building was placed on the National Register of Historic Places in 1979. 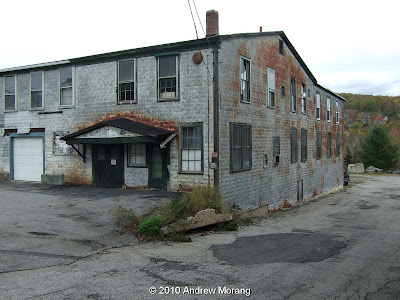 This factory/warehouse was sheathed with zinc plates patterned to look like cut stone blocks. This type of busy pattern, resembling limestone blocks, must have been popular in the late 1800s because early-vintage cinder blocks were also molded with this design. 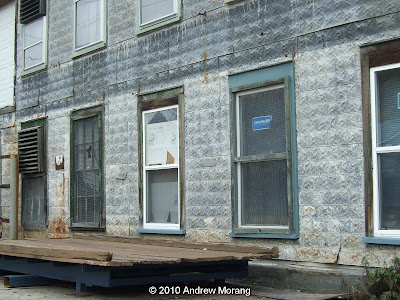 I think this kind of sheathing was most commonly used before the 1940s. By the 1960s, aluminum siding became more popular than steel sheathing because it was lighter and easier to install. 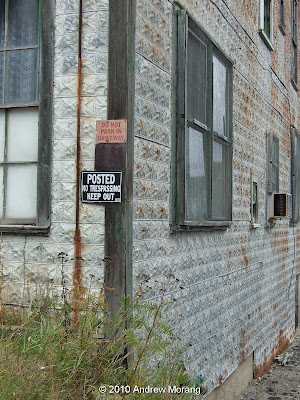 I have seen other buildings with zinc sheathing in other parts of the country. One was a church in Johnson City, Texas, where Lyndon Johnson went to services. The old airport terminal near Tallulah, LA, where Delta Airlines started decades ago, had zinc roof tiles shaped to look like clay tiles.

It's sad to see a town like Berlin heading downhill, but what can replace traditional industries that employed a large workforce? Berlin was once called "Papertown,"but that era ended years ago. The last paper mill in northern New Hampshire, the Fraser Papers mill in Gorham, south of the Berlin-Gorham line, just closed. In Berlin's case, prisons provide some employment but the employment numbers are minor compared to the thousands who once cut and processed timber. You can read about Berlin in Wikipedia:
http://en.wikipedia.org/wiki/Berlin,_New_Hampshire

All photographs taken with a Fuji F31fd digital camera.
Posted by Kodachromeguy at 21:59 9 comments: 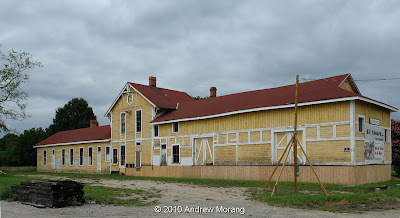 During a recent business trip, I came across a handsome depot in Lee Hall,Virginia (near Williamsburg, not in the best of condition but appreciated by a foundation and in process of being restored. 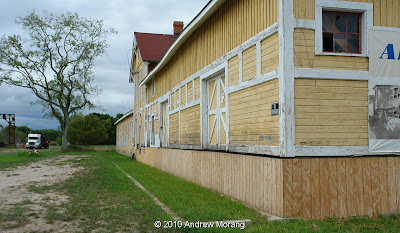 From Wikipedia: "Lee Hall Depot was a railroad station on the Peninsula Extension of the Chesapeake and Ohio Railway (C&O), which was built through the area of Warwick County in 1881 to reach the new coal export facilities at Newport News on the port of Hampton Roads....Lee Hall Depot became a very busy railroad station after the establishment nearby of Fort Eustis (originally named Camp Abraham Eustis) in 1918, with freight and heavy troop movements." 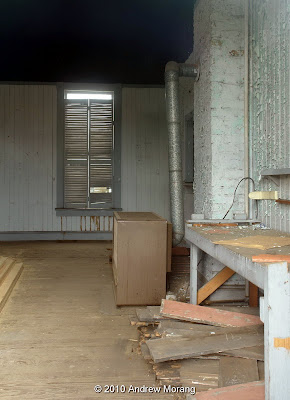 "Lee Hall Depot (no longer is use) is the only surviving C&O structure of its type on the lower Peninsula. It is the only survivor among five stations which were located in Warwick County..." AMTRAK trains may stop here in the future. I am gratified to see historic buildings like this saved from being torn down. They say so much about how we built this nation and how people lived and worked. How many US troops and prisoners-of-war passed through this depot? 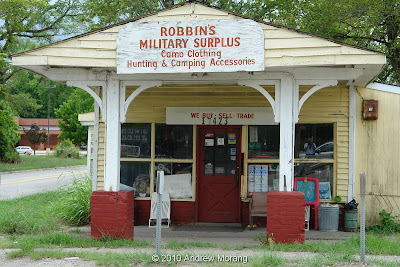 This former service station was across the street from the depot. Hundreds of these simple stations were built as the road system expanded in the 1920s and 1930s. Most are now gone, so it is nice to see this example still standing. 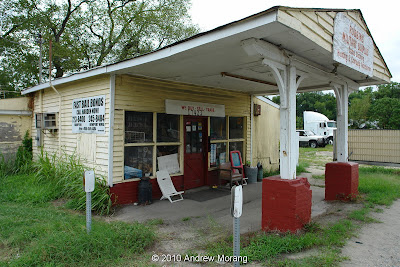 A contemporary Hummer or behemoth SUV would barely fit under this roof. (All photographs taken with a Sony DSC R-1 camera.)
Posted by Kodachromeguy at 21:28 1 comment: