This is my Leica IIIC rangefinder camera made in Wetzlar, West Germany. It uses the standard 35mm perforated film with frame size of 24 × 36mm. My dad bought this IIIC in 1949 when he worked for the US Navy on Guam. It came with a 5cm ƒ/2.0 Summitar lens. He had owned an American-made Perfex 35mm camera during the war years but had wanted a Leica for a long time. During World War II, a few Leicas were exported to the Allies via Sweden, but they were reserved for special uses (spies or well-placed generals?). 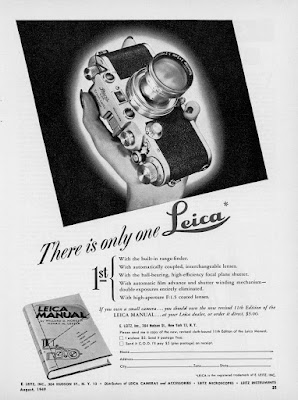 After the war, one of the ways a war-ravaged Germany began to rebuild its economy was to export precision optical equipment, such as the famous Leica cameras. Leica's advertising emphasized excellence and sophistication. My dad took the opportunity of low prices at the post exchange on Guam to buy this body and lens. As I recall, he said they cost $150. He used this little Leica for many years, taking family photographs when we lived in Greece and southeast Asia in the 1950s and 1960s, and I used it in the 1970s and 1980s. 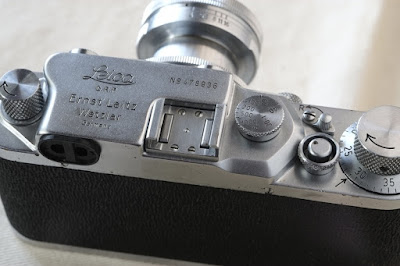 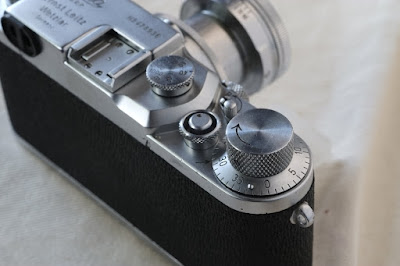 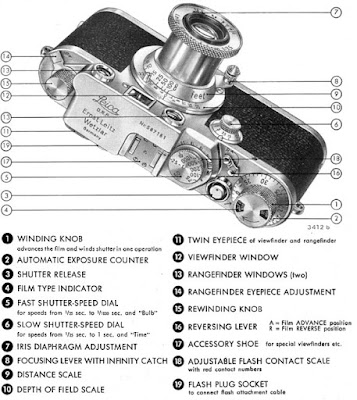 On modern standards, this camera is a bit fiddly to use. First the viewfinder has two windows. The way I use it is to first look through the right finder, which shows the complete scene covered by the 50mm lens. If I like the scene, I shift my eye to the left window and focus on the object that is most important. By the way, it is a remarkably accurate focus arrangement considering the short base length. Then I shift back to the right window, do the final framing, and take the picture. Really, it is easier and faster in practice than to describe in text.
Second, the film needs to be trimmed with scissors to have a long tongue before you insert it in the take-up spool. Then you slide both the 35mm cartridge and take-up spool into the body from the bottom. Leica once sold a trimming guide, but you do not need it. Just use your Swiss Army knife to trim about 8 or 10 cm from the tongue, and it will work. Once loaded, turn the rewind knob gently to remove slack. Then, when you advance the film, make sure the rewind knob is turning in the opposite direction to be certain that the film is truly advancing. Again, it is easier to do than to describe. 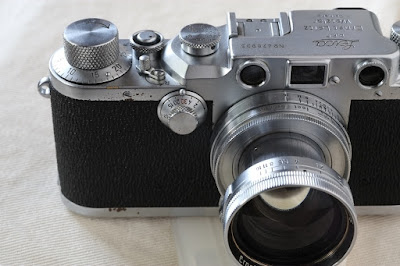 As the photographs show, the camera has almost watchmaker precision in the fittings. The chrome on mine is pitted because in the early post-war era, chromium was hard to buy, and many German cameras had poor plating.

Leica marketed lenses ranging from 21mm to 400mm, all the best quality available at the time. Oddly, my father never bought any more lenses.

My dad's IIIC came with a 5cm ƒ/2.0 Summitar lens (the prestige lens as opposed to the less expensive 5cm ƒ/3.5 Elmar). The Summitar lens was in production from 1939 to 1953. It was designed by E. Leitz's genius lens designer, Max Berek, in 1937. The war-time production lenses were uncoated but were anti-reflection coated from 1946 on. The construction was a complicated design of 7 elements in 4 groups. It must have taken a heroic effort to compute the ray paths by human computers using mechanical calculators and trigonometry tables. The central sharpness is superb, but the edges fall off, and there is some field curvature. This can be used creatively, and regardless, "sharpness" is not normally the factor that makes a photograph successful.

A few years ago, Sherry Krauter in New York cleaned and checked the Summitar lens for me. Mine is pristine and never suffered the scratches in the soft coating that plague so many 1940s lenses (old-time photographers cleaned their lenses with their neckties).

These older Leica bodies have a screw mount for the lenses. The thread is 39mm × 26 turns-per-inch or threads-per-inch (tpi). This was a Whitworth threading standard, which was common in microscope manufacture in the early 20th century. Hundreds of different lenses from German, English, Japanese, and Russian companies were made for this 39mm mount, but focal lengths other than 50mm require an auxiliary viewfinder to show the correct frame. The Japanese company, Canon, continued to make superb thread-mount lenses up through the 1970s, when they finally discontinued their excellent thread-mount rangefinder cameras. Note that this is a different 39mm than the 39 × 0.75 thread used for large-format Copal 1 and many other shutters. And it is different than the 39F pitch (39 × 0.5) used for 39mm filters that screw into the front of many Leica lenses. Confusing? Yes, of course! 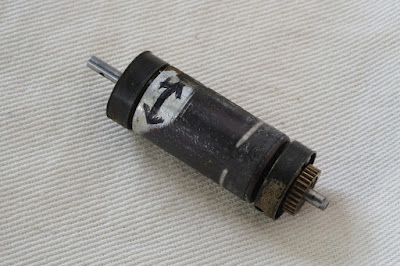 The shutter in the body had been troublesome for over a decade, but Don Goldberg (known as DAG) in Wisconsin did a fantastic job overhauling it mid-2017. This is the main roller, on which Mr. Goldberg marked the areas that were badly worn. He replaced it with a new-old-stock main roller, the genuine Leica part. For how many other consumer products that are almost seven decades old can you still get factory replacement parts (possibly some fine watches or Rolls Royce motorcars?)? 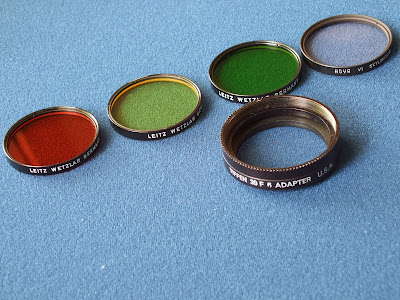 The Summitar lens uses filters with a unique 36mm tapered thread. No other lens ever made used this size. When I used filters on my Nepal trip, I had Leitz Series VI filters and a Tiffen retaining ring. It is a bit clumsy but manageable, and the series filters can be used on other lenses with the appropriate adapter rings. A polarizer is the most clumsy, but Leica made a brilliant fold-out polarizer just for this task (on my shopping list). I finally bought a couple of the genuine Summitar color filters, which are easier to handle than the series filters.

The Summitar lens is a bit quirky. My example (and maybe all of them?) has a lot of field curvature, so the edges of a flat object will be fuzzy. But a typical scene with the subject near the center has smooth out of focus area away from the central subject. This out of focus appearance is known as bokeh. Thirty years ago, almost no one thought about it, but now, many digital photographers are obsessed with the topic. The newer Type 2 and Type 4 50mm ƒ/2.0 Summicron lenses for my Leica M2 body are "better", but I rather like the old Summitar. It feels good to have my dad's camera in operation again. He would be pleased.

For a trip to Nepal in October of this year, I decided to use this little IIIC with black and white film and skip the obligatory digital imaging device entirely. It was a great success. Many Nepalis were amazed that I was using a mechanical camera almost 70 years old. It was a tension-breaker to let people look through the viewfinder, but I had to explain that there was no LCD screen for them to see the results. Surprisingly, some of the camera stores in the Thamel area (the main tourist zone) of Kathmandu still stock fresh Ilford and Fuji film in 35mm size. But you probably could not find any 120 or large format film. These examples are on TMax 100 film, developed by Praus Productions in Rochester, NY. I had only used TMax 100 once before and I'm impressed by the fine grain. Nice stuff. To measure exposure, I used a Gossen Luna Pro Digital meter, usually in reflected mode but sometimes in incident mode.
Nepal is a fabulous photographic destination. The people are friendly and welcoming. The country is developing and changing quickly. Go soon to see remnants of an earlier era before they are torn up and replaced with the new commercial world. The same warning applies to Cuba: Go before the developers pillage and ruin it, especially if American developers ever move in.

For an earlier article about how I have used Leica cameras to record urban decay, click this link. Thank you!

Mike Johnston, former editor of Camera & Darkroom magazine and now author of The Online Photographer, wrote an excellent article in 1992 about Leicaphilia.

35MMC has a useful article titled 7 Reasons You Should Own a Thread Mount Leica. I agree with the author that these cameras slow you down and make you think. You just can't spray and pray like digital users and then doodle around with Lightroom for weeks culling files, doing the "workflow," and hoping that you might have "shot" a meaningful photograph. Film does not work that way.

Phoblogger has an interesting interview with the manager of Richard Photo Lab (Los Angeles, California) about how film most definitely is not dead and is reviving among many age and skill groups.

I bought a Canon 50mm ƒ/1.4 ltm lens and have had excellent results with it.  Click the link to see examples.
Posted by Kodachromeguy at 11:36

Fine article, fine 3C review. My all-time favorite cameras were 2Fs, which have subtle-but-forgotten-by-me advantages. Today, for the same purposes, I rely on Konica Hexar AF which substitutes reliable-but-complicated tech for Leica's total lack of tech...a workable trade off. As well, Konica whups Leica optically...but I'm limited to 35mm bright frame only. I doubt my Konica will find someone to rebuild it in the far distant future, the way your Leica did :-)

Ditto ditto! In the '80s I had an M2 and then an M3 but money problems came along and I had to sell out - I still kick myself for that, but needs must. A good friend loaned me a ca 1950 IIIc with the workhorse f/3.5 Elmar and I happily shot B&W with this kit until my finances improved - and then what did I buy? A Nikkormat.

Recently I found my Leica negatives and put in time in my darkroom printing them. With great pleasure. As a very old German photographer once told me, Leitz lenses gave softer contrast but "wrapped the light" around the subject in a way no other lenses do (excepting the great Carl Zeiss optics which I believe, come close but not quite up to Wetzlar quality).
These days the only Leitz item I own is an old ELDIA printer I was given, but if I ever win a lottery, I'll buy into Leica Ms (an M2 is on my "want list") - if a good IIIf or IIIg were to come along, I would grab it in a flash, as lensmen say.
For lightweight travel nothing will ever beat a '50s Leica with one or two lenses, a lens hood and a few filters. Let the digi whiz kids have their plastic toys... with a bit of intelligence and some footwork we film users easily outshoot them in (not all, but) almost every situation.
Yes, a super fine review of the IIIc, a truly legendary camera.

Great article thanks for putting the effort in it's not easy.
I've a 111f summitar and a 111c summar and in my opinion there both wonderful and very useable classic cameras. But I've always had a soft spot for the older Nikons especially nikormats so well built solid with a top quality range of lenses at reasonable prices £21 for a ft2 50mm f2 nikor (ebay)
So many cameras so little time!!!

Mark, you are right: so many cameras, so little time. But time for older cameras may be gradually running out. Prices for good-condition examples are rising. The era when people switched to digital and dumped their film cameras in thrift shops is 15-20 years behind us. There is a finite and diminishing pool of good film cameras because time, rust, and mildew take their toll. Buy while you can and prices are still reasonable! And keep supporting real photography.