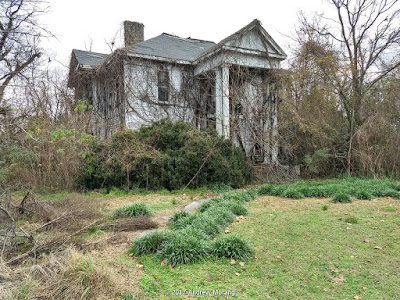 Dear readers. in my last article, I was happy to report how a Victorian-era house in Vicksburg was finally being repaired and saved. But in the small town of Foote, along the shore of Lake Washington north of Glen Allen, the news is much worse. The Susie B. Law House on Lake Washington Road Eastside has deteriorated badly. Some of the roof shingles have fallen away, and in the wet and rainy climate of the Delta, roof leaks lead to rapid rot and deterioration of wood structures. I could already see some eaves rotting away. 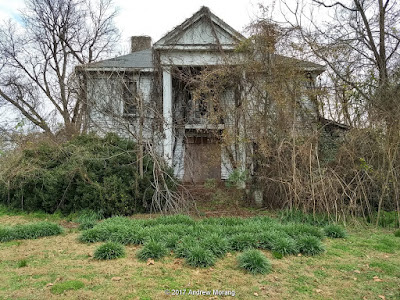 Trees have fallen on the driveway and not been cleared away. Whoever owns the house had not obviously done any cleaning or repair in several years. 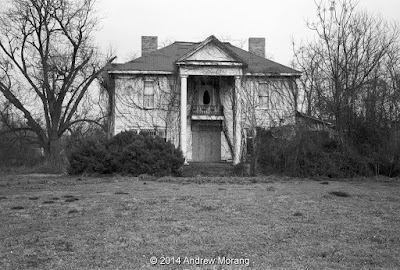 I wrote about the Law house in spring 2014. It was neglected then, but not as overgrown and was mostly intact. Also, back then, the roof was mostly intact. I fear the worst for this once-handsome example of a Sears Roebuck kit house.

Another piece of bad news for preservationists: just to the north, the brick walls of the once magnificent Italianate mansion known as Mount Holly sit unchanged and abandoned since the 2015 fire. Status: unknown.

The black and white 2014 photograph was taken on Panatomic-X film with a Fuji GW690II camera.
Posted by Kodachromeguy at 21:26

Do you know who owns this place? Or if it's possible to buy it?

Regretfully, I know nothing about ownership or status of the Law house.