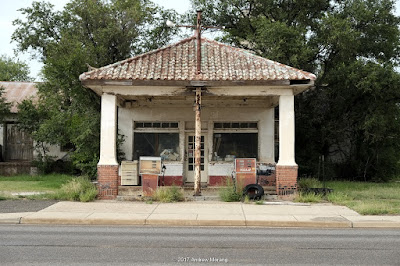 On our way back home from Santa Fe, we drove on US 287 from Amarillo to Dallas. 287 is not part of the old Route 66, but there are a surprising number of old gas stations, closed business strips, restaurants, and deserted farm houses that provide a 1950s Route 66 ambience. That part of the Texas Panhandle warrants a return trip with a big film camera (Aha, road trip!). 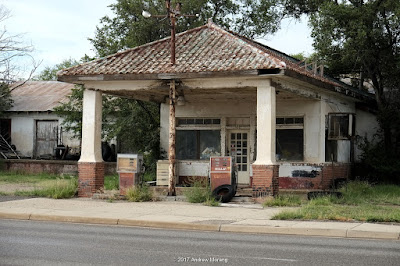 Claude is a small town southeast of Amarillo. We were zipping through town and this little gasoline station caught my eye. Look at the roof tiles: they look like clay but are really steel with (probably) a zinc coating. 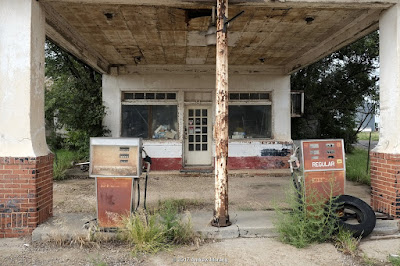 Under the overhang, the original zinc ceiling panels are still in place. You still see these in early-20th century commercial buildings, and recreations are available for places that want to replicate the old-timey look. 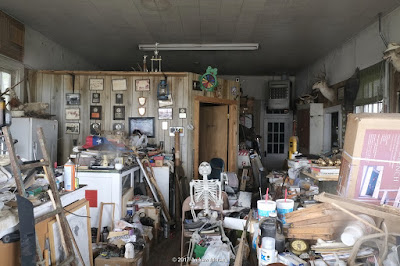 Inside, a resident! I suppose the gas station attendant is still awaiting customers. 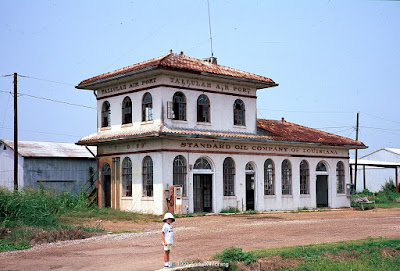 I have seen these zinc roof tiles before. This is the old Tallulah (Louisiana) Terminal, now known as Scott Field. This handsome little terminal was on the original routing of Delta Airlines in the 1930s. 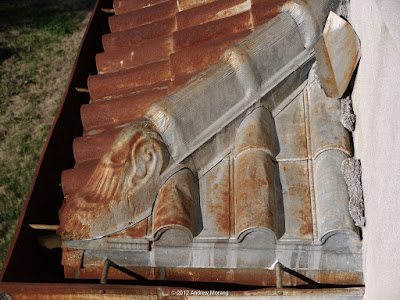 This is a close-up of some of the tiles, photographed from the second floor. Nice workmanship. I am surprised we do not see these types of metal tiles used more on current construction.

An article by Thomas Rosell in Preservation Mississippi provides some advertisements from companies that made metal shingles. Many were from the Montrose Metal Roofing Company of Camden, New Jersey.

The 2017 photographs are from a Fuji X-E1 digital camera. The 1991 is a Fuji Velvia slide taken with a Leica M3 camera and a 50mm f/2.8 Elmar lens (that was the superb 1960s and 1970s version with lanthanum glass and an almost circular diaphragm).
Posted by Kodachromeguy at 08:00 No comments:

The Valentine Diner of Chandler, Oklahoma 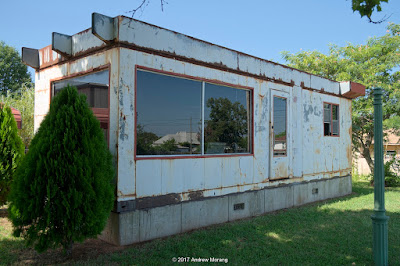 On our recent Route 66 trip through Oklahoma, we passed through the small town of Chandler. I stopped to photograph a historic Phillips 66 gasoline station on the corner of Manvel and 7th Street. My always-observant wife looked down the street and told me to check out old diner. A real find! 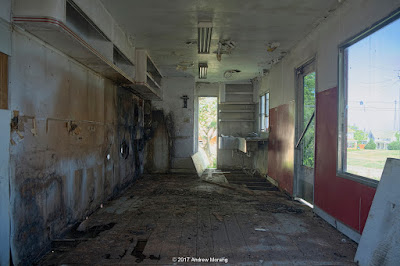 The inside was a mess, and the counters were gone. But you can see the streamlined pseudo-Art-Deco stripes on the overhead cabinets. Nice work. 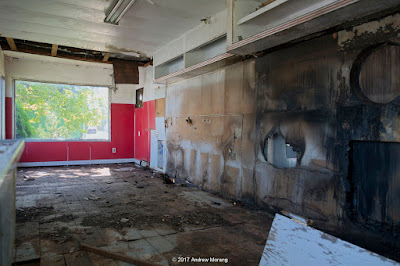 Viewed from the other side, you can see there was once a fire. So far, there is no sign of restoration in progress. But at least the windows were intact.


"What are Valentine Diners? They are small, portable restaurants that were made in Wichita and shipped all over the United States."

"Valentines were small eight- to 12-seat diners with a limited menu, making them ideal for a one person operation. They made it possible to operate a business with very little capital. "

"These diners were manufactured in Wichita from the late 1930s into the mid-1970s. Sales of the buildings expanded nationwide, and soon Valentines were all over the United States. Many are still in use today. "

Photographs taken on July 25, 2017 with a Fuji X-E1 digital camera. I processed the RAW files with Photo Ninja software. If you use a Fuji camera, I recommend Photo Ninja highly.
Posted by Kodachromeguy at 09:00 4 comments:

Mulberry Street runs from Washington Street down the hill to Levee Street, on the dry (east) side of the Yazoo Canal floodwalls in Vicksburg. An abandoned oil distribution terminal is located next to the Kansas City Southern railroad tracks, where they make a turn and go through a tunnel under Washington Street. This complicated rail routing has existed since before the Civil War. The beautiful brick and stone tunnel has a keystone with an engraving of 1898. 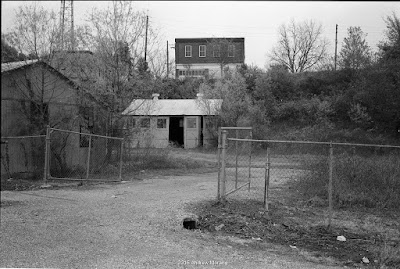 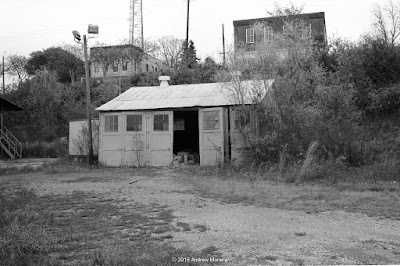 There are a couple of steel utility buildings on the site. Not too exciting. Washington Street is on the hill above. 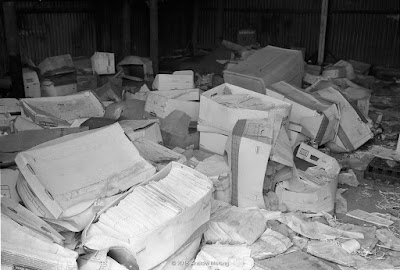 One building had piles and piles of old invoices and receipts. I guess this is the paperless office we hear about so often. 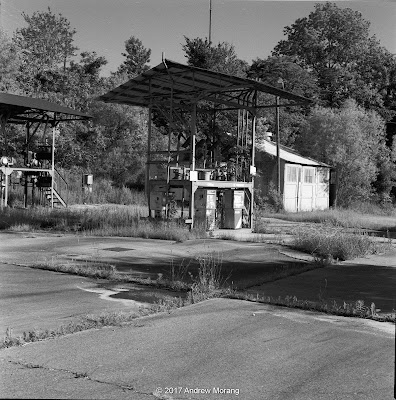 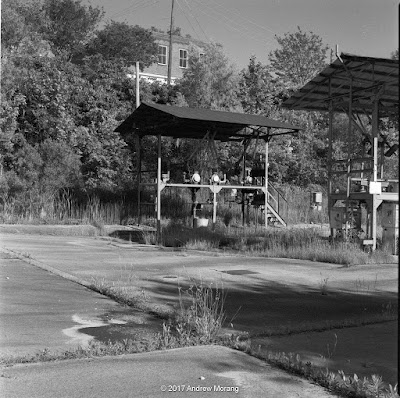 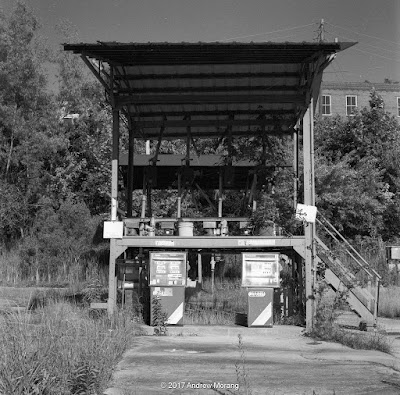 I revisited the terminal on a sunny day spring 2017 when I was testing my newly-acquired Hasselblad. These three are with Tri-X 400 film. Not much has changed. There is still a faint aroma of petrochemicals. Mississippi is easy for this type of photography because many abandoned sites are unlocked and open.

UPDATE APRIL 7, 2018:  The pumps, valves, and metal stands are gone. The site is covered with new soil and gravel.
Posted by Kodachromeguy at 08:00 No comments:

Morgan City is a small farming town in Leflore County on Hwy. 7 southwest of Greenwood. (Note, this is a small town in Mississippi, not the much larger city of the same name on the Atchafalaya River in southern Louisiana.) 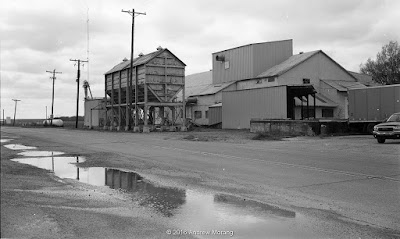 The main road through town, Hwy. 7, has an agricultural complex, but I could not tell if it was in operation. 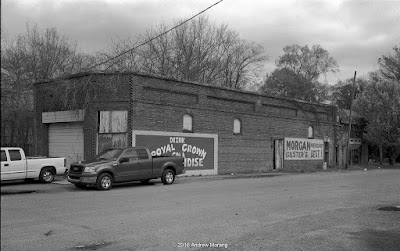 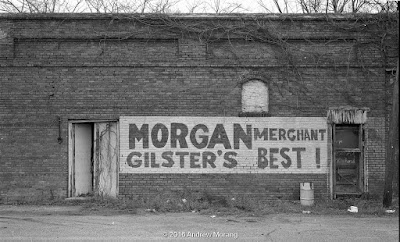 The local dudes were hanging around near the Morgan store and having a good old time with plenty of beer. Note how this early 20th century brick building has a 45° corner to provide access from both streets. 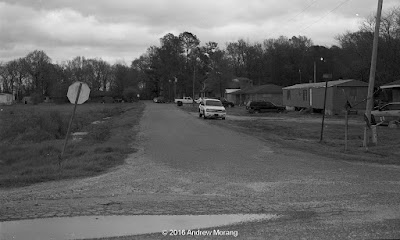 Across Hwy. 7, Diggs Street is a community of mobile homes with a couple of ranch-style houses. 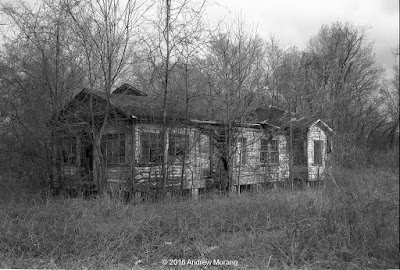 There is not much to the town. Several houses look like this. 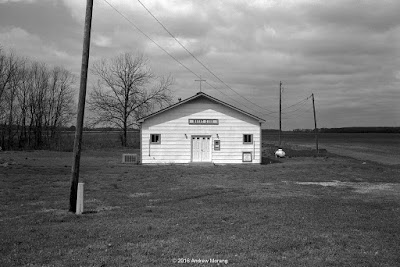 The Mount Zion Church is north of Morgan City, at the junction of Hwy. 7 and 511 in Sheppardtown. 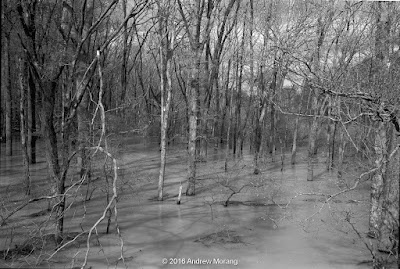 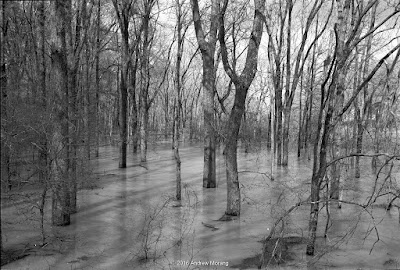 South of Morgan city, in Swiftown, the Sunflower River was in flood and coursing through the woods. It was fun to stand on the bridge and watch the water flow and bubble beneath me.

I took these photographs with my Fuji GW690II 6×9 camera (medium format, known as the "Texas Leica") with its 90mm f/3.5 Fujinon lens on the classic Kodak Panatomic-X film (long discontinued). I wrote about Panatomic-X in an earlier post (click the link).
Posted by Kodachromeguy at 22:46 No comments:

Kodachromeguy asked me to contribute a post to his urban decay blog after my recent trip to Seoul, South Korea. Seoul isn't decaying. Very much not so!  But it's a very ugly city with a lot of very ugly buildings. Hopefully readers of this blog will enjoy my photos (which undoubtedly don't match Kodachromeguy's usual quality standards) and my descriptions of Seoul.

Today, the Seoul metropolitan area is home to about 25 million people, which is about half the population of South Korea.  (For comparison, the greater Los Angeles region, a geographic area far, far larger than Seoul, has only about 15 million.)  The Korean people picked themselves up by their bootstraps after the Korean War (1950-1953) and went from being one of the world's poorest countries to being one of the richest in just 50 years or so, transforming into a world leader in technology and culture with a very high standard of living.

Despite this impressive development record, Seoul is a very ugly city.  The city is densely packed with nearly-identical high-rise apartment blocks and a mish-mash of other concrete rectangles, very few of which seemed to have benefited from the services of an architect.  The city seems to function very, very well, and efficiently, but it's certainly not inspiring to look upon.

Modern Seoul was built in a hurry. Some 1.2 million people died in the Korean War, a conflict which obliterated a great deal of infrastructure and left the country divided.  After the war, massive amounts of housing and other basic infrastructure were the top priority.  The following decades also saw large amounts of rural-to-urban migration, spurning on the need for still more rapid building.  It's no wonder there was little room for aesthetic considerations.

These quickly-built, now-older areas of the city have some really awful beat-up buildings, all still in use. (There's no room in Seoul for empty buildings or vacant lots.  Every inch of space is used.)


Gentrification is definitely ongoing. It's not unusual to see a new glass-and-steel skyscraper dwarfing a clump of older buildings.
However, even now, aesthetics doesn't seem to be a priority.  I read through a summary of Seoul's master plan for a class I was taking, and there was nothing at all about aesthetics, design, or beautification.  Contrast this to, say, Toronto, another city I studied for a class.  In Toronto, a complex and very specific zoning code controls the height and setbacks of buildings to make sure that streets don't feel like crevices and to ensure that people have nice viewsheds from the upper floors of buildings.  There appear to be no such codes in Seoul.

That said, some of the newer areas do look a little nicer.  For example, Digital Media City, a government development project to put media and entertainment companies in a sparkling new neighborhood, had some buildings that looked like they had actually been designed and some top-notch public art.
The Seoul government has also put a lot of effort into a couple of showcase projects, such as the restoration of the Cheonggyecheon Stream.  The stream was important in the early days of Seoul, but after the Korean War, it became very polluted and the site of lots of homeless encampments, so they covered it over with a highway.  In the early 2000s, they removed the highway and restored the stream into a very pleasant public park that spans much of the heart of the city.

The stream begins with a fountain and a little artificial waterfall right in the city center and then travels in a nicely-landscaped concrete channel for several miles before emptying into the Han River. Either the historic water source of the stream was always intermittent, or else it's been too disrupted by other construction (of the metro and such) to provide adequate water for the stream now, so Han River water is actually pumped to supply the stream water.  It's fantastic as a park, and it's beautiful, but its ecological value is debatable.  It's certainly not "natural", but it's also probably a lot better than a highway.

Because Kodachromeguy always does this: All photos were taken with a Sony Xperia Z3 Compact smartphone with a lens cover that is a little messed up.
Posted by morangm at 09:00 2 comments:

Adrian, Texas, is the midpoint of Route 66, meaning it is equidistant to Santa Monica Pier in Los Angeles or to Lake Michigan in Chicago. 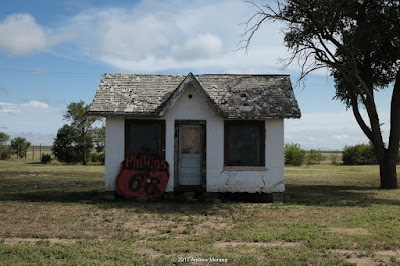 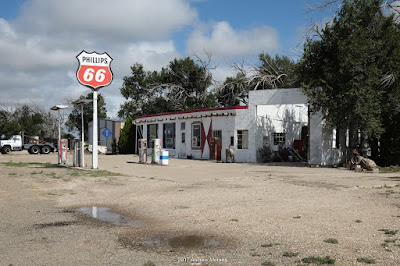 Just to the left (east) of the little station is a more modern Phillips 66 station, but also not in operation.

I checked the locations of these buildings on Google Maps and was perplexed. Look at the Google Street View from 2011: The little station is not present. Someone trucked in this the little building from somewhere else and placed it next to the tree. Did the aliens move it?
Posted by Kodachromeguy at 09:00 3 comments:

Sunflower is another small town in the west central Mississippi Delta. According to the 2000 census (as cited in Wikipedia), it had only 669 residents. I have driven through only twice and saw only a few photographic opportunities. 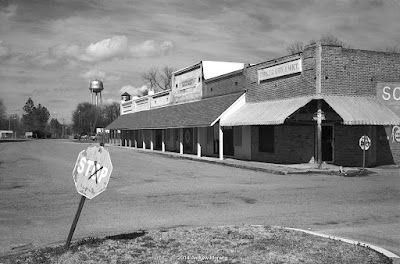 Delta Ave. was the former commercial block, consisting of brick shops similar to those in other Delta towns. 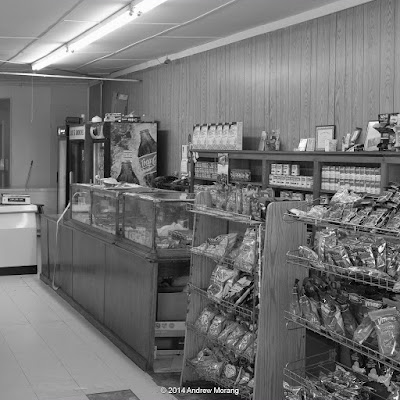 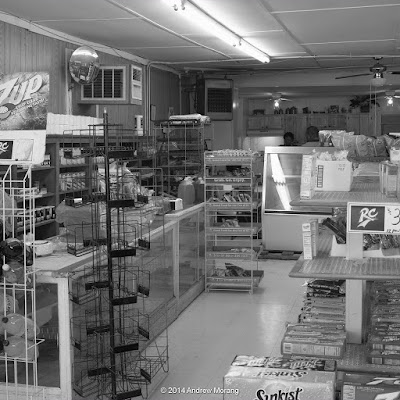 Russell Grocery on Quiver Street was open. The proprietor generously let me take a couple of photographs. He said he was doing his best to keep the store in operation. It was immaculately clean. I noticed that most of the food was in the form of fast food and soft drinks - the curse of the Mississippi diet. 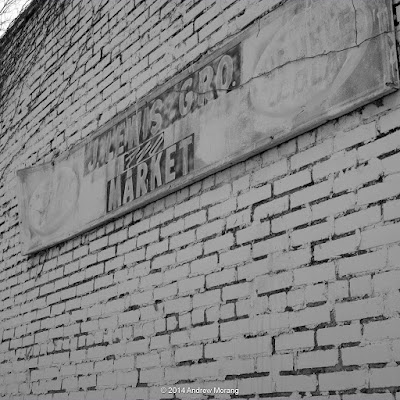 Other grocery stores had occupied the building in the past. 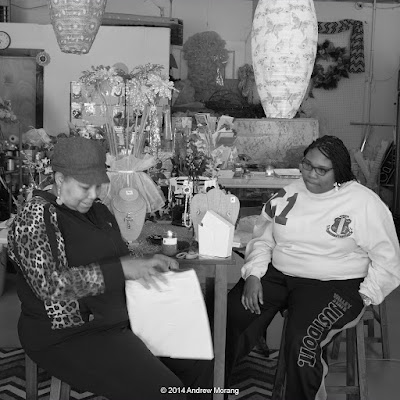 At Haley's Floral Center, also on Quiver Street, the ladies invited me in and showed me some of the floral arrangements. They were very gracious. Such kind people, but it must be a difficult life in a small town. What can they do professionally other than move away? But that inevitably would mean mean leaving family behind.

The first two photographs were taken with a Fuji GW690II camera on Kodak Panatomic-X film. The remaining photographs are from a Fuji X-E1 digital camera.
Posted by Kodachromeguy at 17:13 No comments: