From the Archives: New York City in 1938

Dear Readers, you may remember that I recently experimented with film packs, in my case GAF Versapan in 4×5" size. I had little experience with this format, but early in the 20th century, various size film packs were common. Before 1939 or 1940, my dad used film packs for all his photography. He bought his first roll film camera, a 35mm Perfex, in 1941 or 1942.
He stored his negatives in the envelopes that came back from the processing laboratory or drugstore and neatly filed them in an office box. I recently decided to recheck the negatives. Looking through the envelopes, I saw one labeled "New York Nov. 1938." These negatives were 2¼×3¼ inch size (close to the 6×9 that is common today). I think these were from a Certosport or Certotrop camera. I recall using it a few times around 1970, but cannot remember what lens was on it. My photographic results were quite unsatisfactory, and the unit suffered from light leaks. Back then, you could still buy the small pack film. These are probably all nitrate film stock.

My dad and his friends took a boat trip, possibly one of the circle-Manhattan excursions that are still popular. He was lucky to see the Queen Mary heading out to sea.
This group of night photographs may be from The Top of the Rock at 30 Rockefeller Plaza. According to Wikipedia,

In 1938, this was a glamorous example of American architectural and engineering excellence.
This is the famous Prometheus statue, by sculpture Paul Manship, located in the lower plaza at Rockefeller Center.  "Prometheus, teacher in every art, brought the fire that hath proved to mortals a means to mighty ends."

This ends our short 1938 tour. I will slowly look for more New York negatives as I go through the box.


The Model A shown in the catalog from Burleigh Brooks may be my dad's  Certo camera, but I just cannot remember. 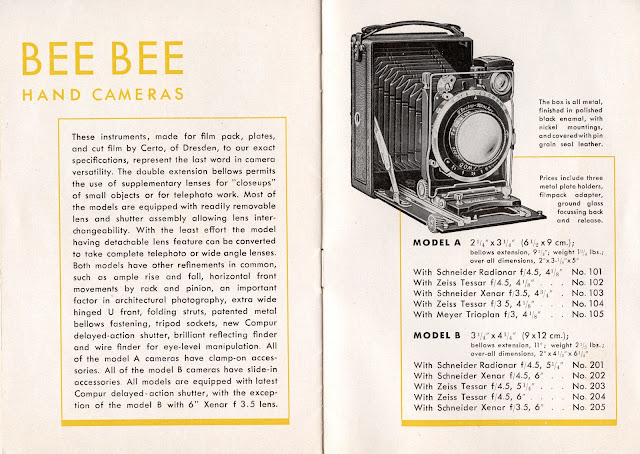 Posted by Kodachromeguy at 08:00 5 comments:

Natchez is a historic city on the banks of the Mississippi River in west central Mississippi. In the pre-Civil War era, the city generated fabulous wealth from the cotton and sugarcane trade, and the wealthiest families built suitably fabulous mansions to demonstrate said wealth. Much of this economic activity came to an abrupt halt when the war started, but fortunately, the city did not suffer warfare or burning. After the war, the city's fortunes revived for a few decades but generally declined in the twentieth century. Fortunately, much of the architecture remained intact, including many of these amazing mansions.

One of the grand structures is Arlington, now located at 1320 John A. Quitman Boulevard. It has suffered decades of neglect and may be on a demolition list because it is structurally unsound. According to Wikipedia,

Arlington is a historic Federal style house and outbuildings in Natchez, Mississippi. The 55-acre (22 ha) property, which includes three contributing buildings, was listed on the National Register of Historic Places in 1973. It was further declared a National Historic Landmark in 1974. Following a fire that destroyed much of the main house, it was placed on Mississippi's 10 most endangered historic places for 2009 by the Mississippi Heritage Trust.

Arlington suffered a devastating fire in 2002. According to a 2018 article in the Natchez Democrat newspaper,

Arlington was built by John Hampton White in 1818. In 1973 the property was listed in the National Register of Historic Places and in 1974 was declared a historic national landmark.

In September 2002, Arlington suffered severe fire damage, which destroyed the roof and the second floor. A roof was installed shortly after the fire, but no work was done to protect the house from weather or vandalism, the Democrat reported in a 2012 story. In 2009, the house was named the second most endangered historic property in Mississippi by the Mississippi Heritage Trust. The Mississippi Heritage Trust has been releasing a list of 10 most endangered places since 1999.

The owner is a Dr. Thomas Vaughan, who has let the property suffer severe deterioration. I do not know the present status of the City of Natchez' plan to condemn the structure and assume ownership. Preservation in Mississippi described some of the confusion and issues around the status of the building, which obviously have not been addressed as of the time of my visit in late 2020. 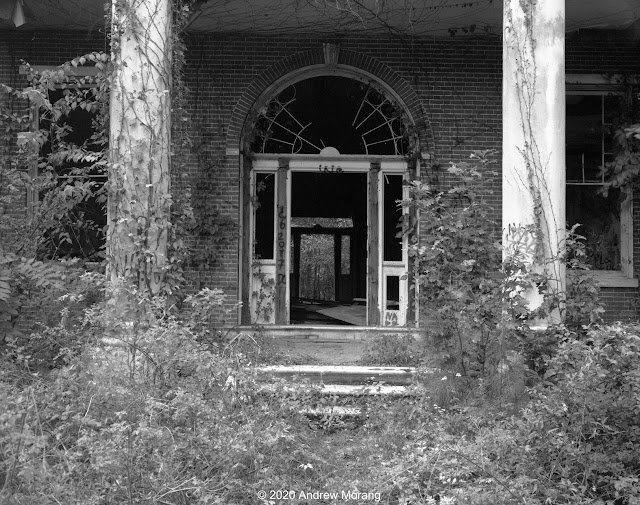 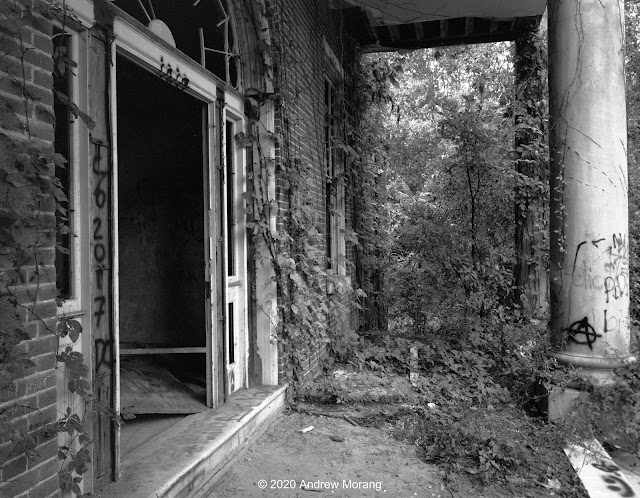 Someone (occasionally) mows the driveway area and part of a former front lawn. But the sides and back of the house are thick with brush, and I did not try to walk out back. The porch is a mess of poison ivy. The driveway had tire tracks, and some trash and bottles attest to visits by vandals.
As you can see, there is nothing left in these rooms. The floor looked marginal in some areas and I did not venture inside.
The east side is overgrown and almost impassable. In summer, I think you would not want to battle with the poison ivy (and snakes and bugs?) 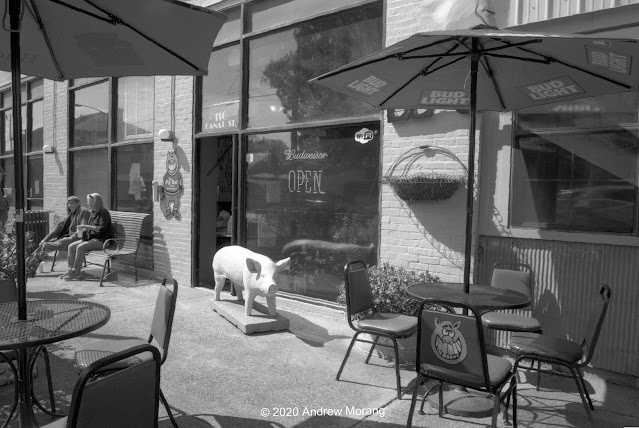 After a few hours exploring, what is there to do in Natchez? Why, go eat some barbecue at Pig Out Inn on Canal Street. Outdoor seating, good food, and room for social distancing.
Natchez is an interesting and well-preserved city. I will return for more exploring.
Posted by Kodachromeguy at 22:25 2 comments:

This is the last article in my survey of Vicksburg's Pearl Street houses, covering the stretch north of Klein Street. The previous articles covered:

No. 501 Klein Street, at the corner of Pearl, was on the city demolition list, as shown by the spray-pained "DEMO" sign. But as of early 2021, a work crew has been painting and repairing the house.
Around 1989 or 1990, the owner of this house imported some pieces of the Berlin Wall. They were so heavy, they came in by truck. My friend at Annabelle told me that the Berlin Wall guy planned to sell pieces as souvenirs. However, the pieces looked like nasty grey chunks of concrete, and there was nothing to uniquely identify them with the Wall. They languished on the side yard for a decade or more and finally disappeared. I suspect Vicksburg is not quite the right market in which to sell Cold War nostalgia or GDR souvenirs. 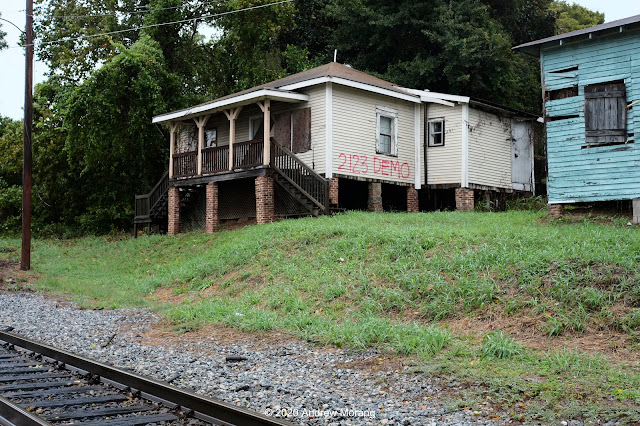 2123 Pearl Street was in good condition in 2003, but then deteriorated to the stage where the city inspector placed it on the demolition list. But as of 2021, it has been painted and repaired.

The view west down Railroad Avenue is rather bleak, especially on a rainy day. I do not remember when houses lined the street.
These little cottages had their front porches at street level, while the rest of the structures were perched over the hillside, supported by wood piles. This was a common construction practice early in the 20th century in this hilly city. But today, the buildings cannot be rebuilt on these lots once they have been condemned. These steep hillside lots becomes uninhabitable. The City demolished a large number of these houses in the early 2000s. I do not have more photographs. These were approximately across the street from the warehouses that were part of the Mississippi Lumber Company (1900 Mulberry Street).

The hotel in this photograph, originally built by Harrah's Casino, has been closed for at least a decade. As usual around here, there appears to be no status. 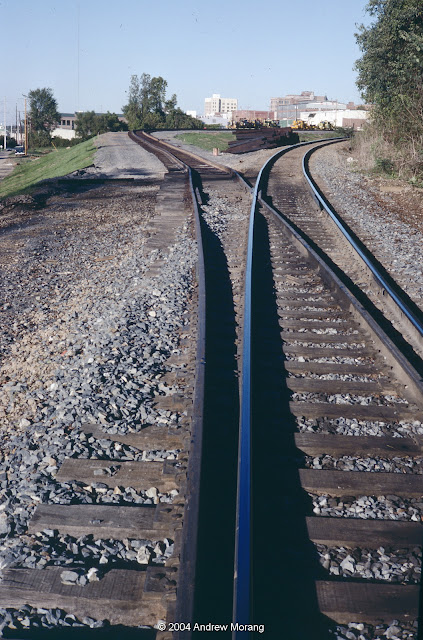 This photograph shows the new section of track built by the Kansas City Southern railroad to reduce the radius of the curve where the rails turn east and pass under Washington Street. The older track, on the right, was such a tight turn, rail cars regularly derailed.
Dear readers, this ends our short series on Pearl Street. I hope these photographs will remind former residents of what the neighborhood looked like decades ago.
Posted by Kodachromeguy at 07:00 1 comment:

We will continue our review of historic Pearl Street in Vicksburg, Mississippi. This covers houses north of Fairground Street. This is not a comprehensive inventory because I did not photograph every house. Please see the previous article for the area south of Fairground Street. The color photographs are scans of Kodachrome 25 film. Click any frame to see a larger view. We will proceed from south to north, with house numbers decreasing.
I previously wrote about Pearl Street in 2010 and 2014. Below I have repeated a few of the photographs from the earlier articles, but I reprocessed the scans to improve the color or exposure.

This venerable duplex has been perched on this hill forever. The brick front steps are impressive. The house has been in poor condition for decades, but I think it is occupied.A wide grassy lot is just north of 2421. I do not know how many houses once occupied that strip.
The building in which Tuminello's restaurant was located is still standing at the corner of Pearl and Speed Streets, but the restaurant has been closed since the late-1980s or early-1990s. It was highly regarded in its day. I ate there two or three times in total.
The brick-faced building on the left (north) side of the street is the former Tuminello's Kitchen.
Some handsome tour houses, including Annabelle Bed and Breakfast, occupy the east side of the block between Speed and Klein Streets. They are obscured by thick hedges and I do not have photographs of them.

Fairground to Speed Street west side (even number houses)

Speed Street to Klein Street west side (even number addresses) 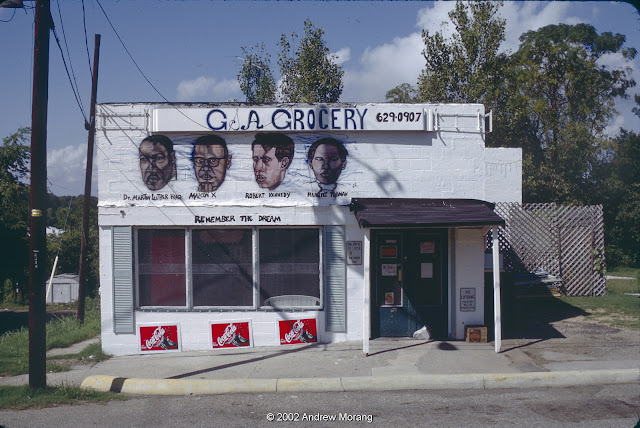 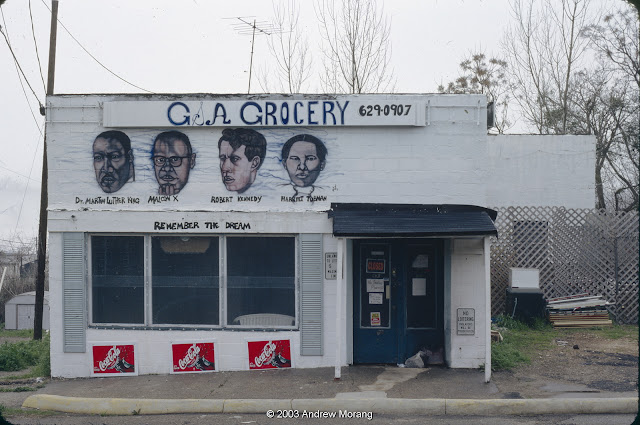 The old-fashioned store at 2328 Pearl Street was decorated with some nicely-done portraits of civil rights icons in the 2002-2005 era. The building now is a dingy uniform tan color and is closed. It is made of cinderblock, which suggests it was built post-WWII.
North of the store, no houses are standing as of 2021. The level crossings at Speed and Klein Streets have been closed and blocked. This way, the trains do not need to sound their deafening horns.
Railroad Avenue must have once had many houses, but most are now gone. I am sure at one time, men from these houses worked at the railroad yard at the base of the hill. My friend said soot in the air from steam locomotives soiled laundry.
This ends our brief review of the central section of Pearl Street. The next article will cover the zone north of Klein Street.
Posted by Kodachromeguy at 08:00 2 comments: