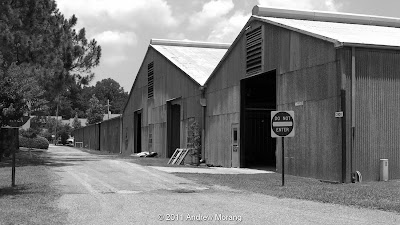 In the previous article, I described how the Waterways Experiment Station in Vicksburg, Mississippi, formerly conducted numerous tests using hydraulic models. Some were outside, like the famous Mississippi Basin Model in Jackson (see the December 2010 update). But most models were inside shelters or hangars to keep them out of the weather and limit dirt and debris. 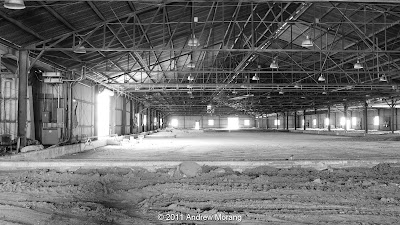 Shelter 3 is an example. There is nothing glamorous about it; it is just a steel roof over a dirt floor. When complete, it covered 97,300 square feet of model space. Most of this shelter will be torn down soon, so the models were dismantled and miscellaneous equipment was moved out in 2010.

(Notice the "blooming" around the windows and doors. This is diffraction that occurs when the source of light is many stops brighter than the main part of the image. It is worse with small-sensor point-and-shoot cameras. High-speed black and white film would have responded similarly because of the thickness of the emulsion, but a thin, low-speed film like Kodak Panatomic-X would have minimized the blooming. The quality of the lens coating and the number of elements also affects diffraction.) 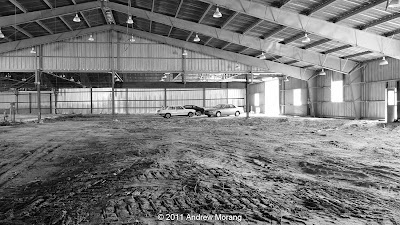 Until the building is demolished, it serves as a convenient place for employees to park cars. In a 1949 aerial photograph of the lab, a low wood shelter occupies this location, but in a 1981 photograph, this steel building is present. Many of the World War II-era wood shelters were replaced with steel in the 1960s. 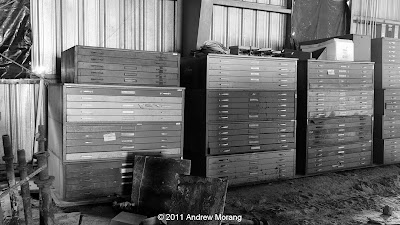 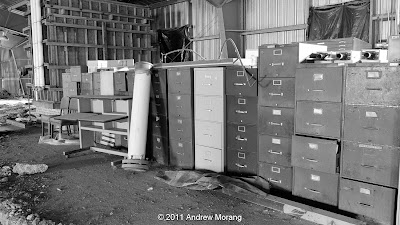 A few treasures remain. A sizable collection of file cabinets and map cases contain old project files. As time goes by and technicians retire, fewer and fewer remain who remember what the files pertain to. It is unlikely that a hydraulic model would ever be rebuilt, but most Corps of Engineers projects, such as locks, dams, and waterways, last for centuries, so the data in the files may be of value in the future. But how will these files be stored and organized? Eventually the bugs and mildew will eat the paper if they don't move the files to a climate-controlled space. 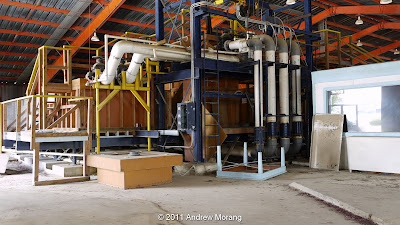 There is still one model in the north part of the shed, but I have not seen it used in a long time. It was a section model of the Dalles on the Columbia River. You see a number of odd little footprints in the soft dirt, probably raccoon. There are also fox on station 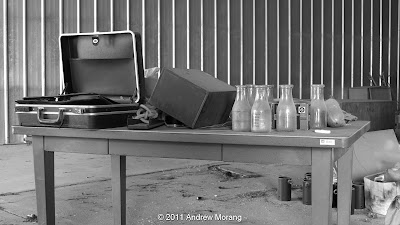 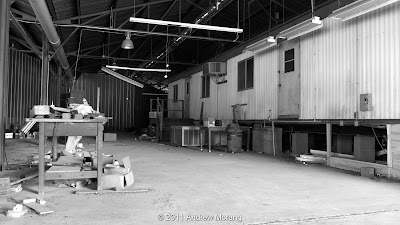 The south side of the shelter was used by a joint US Army Corps of Engineers and US Geological Survey program that developed and calibrated river sediment samplers. Measuring how much suspended sediment moves down rivers is difficult and labor-intensive because field crews have to cross the river and collect water samples at various depths. Bedload samples are even harder to collect and calibrate. 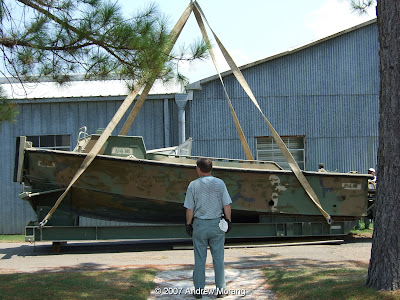 For the field work, they used sturdy Army Bridge Erection Boats. These were sent away to some other Army base. I like strange heavy-duty equipment like this.

All images except the last (the boat) were taken with a Panasonic G1 digital camera with Lumix 14-45mm lens, tripod-mounted. The in-camera black and white mode is very nice, with results as good as reprocessing the RAW file.

Update April 30, 2012: The shelter is actively being dismantled.
Posted by Kodachromeguy at 14:36 No comments:

Pumping water has always been a big activity at the Waterways Experiment Station, the Corps of Engineers research center south of Vicksburg, Mississippi. In the past, most hydraulic models were physical models, meaning they were three-dimensional reproductions of the earth, rivers, and channels through which water was run to test how different engineering works performed. 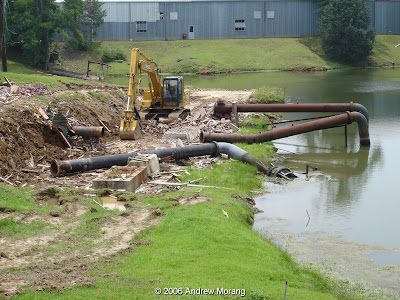 Over the last decade, the amount of physical modeling done at the station has dropped off greatly because of the high cost of the technicians and equipment. Also, numerical (computer) models can now do many of the simulations more quickly and can test a wide range of options. Therefore, much of the old pump equipment has been surplussed, and some of the hangers have been removed. The scene above shows Pump House 3063 being demolished. 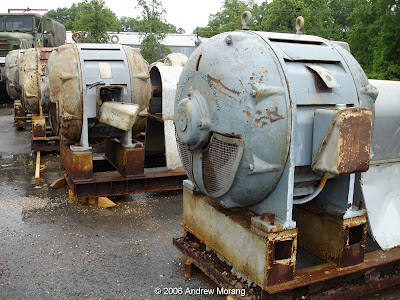 The pump house formerly housed six or seven 200 horsepower pumps that distributed water to the surrounding shelters and to an open-air model of Old River Control. Pipes ran underground to the various shelters, and the return water flowed back to the lake. 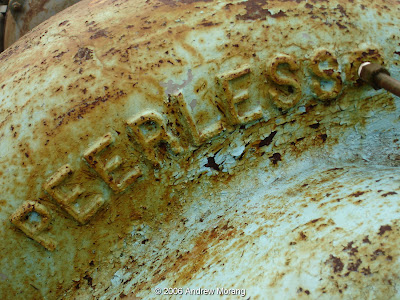 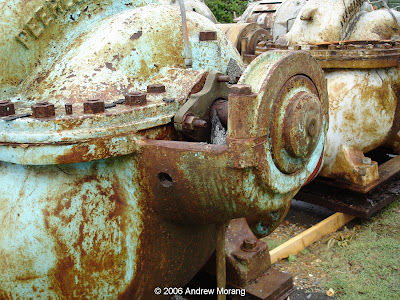 This was massive, heavy-duty equipment. The pump house appears in a 1949 aerial photograph of the station, so we can assume the pumps are older. The body of water that served as the reservoir was known as the Supplemental Lake (with Brown's Lake being the "main" lake). Over the years, the lab switched to using city water to reduce fouling from silt and organic debris. The lake now is a healthy habitat for fish, turtles, snakes, and fish. I occasionally see a Belted Kingfisher perched on a pole looking for lunch. 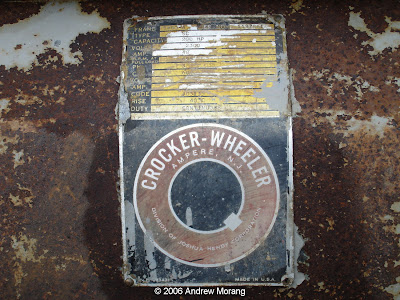 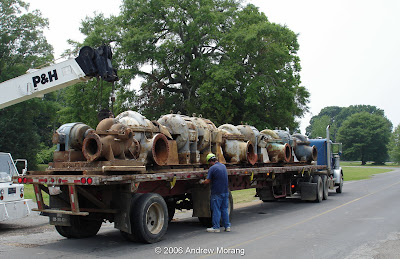 All the pumps were taken away by a metal recycler on May 11, 2006. I heard that he found a buyer for the equipment, so maybe these historic pumps are still at work somewhere.

Digital images taken with a Sony DSC-W7 digital camera.
Posted by Kodachromeguy at 12:46 No comments:

In the last essay, I showed some photographs of Building 2025, one of the "temporary" structures erected in World War II at the Waterways Experiment Station. I am glad I stopped to record what was left because on July 8, 2011, the backhoe started tearing it down. 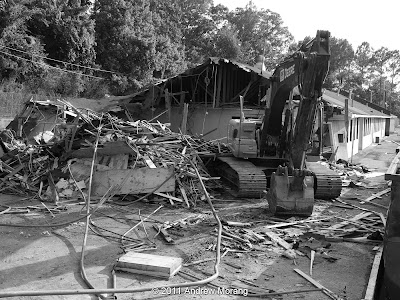 It does not take long for a machine to tear down wood walls. But the floor was well made; the tractors drove on it without it collapsing. 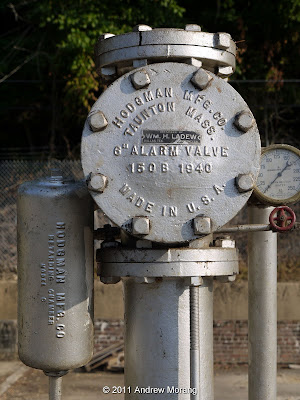 This very interesting manifold was part of the water sprinkler system. Plumbing was well made in those days, made to last. 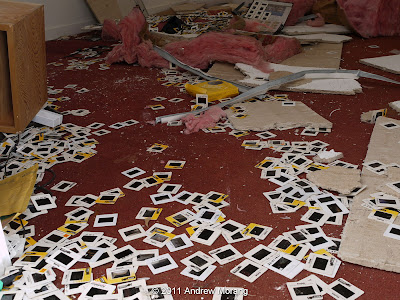 Finally, I found a room with thousands of 35 mm slides strewn about on the floor. They had once been labeled and neatly stored in sleeves or Kodak Carousel trays. Is this the fate of most old photographs? We cherish 100-year-old photographs of people and cities, but age and rarity have enhanced their value. Once photography became a common hobby in the post-war era, people took millions or billions of snapshots and dumped the negatives and prints in boxes. Possibly only the original photographer considered the work valuable. I often read on photography forums how a digital photographer backs up all his files on a RAID machine and sends a spare backup to safe storage somewhere. And if those machines fail, will it really matter? He takes 10,000 photographs a year and all of them are works of art? It is a guy thing. Will his family ever really look through his tens of thousands of files? The same with this old building. Does it really matter that it was torn down?)

(Photographs taken with a Panasonic G1 camera. The scene with the slides was an 8-second exposure.) 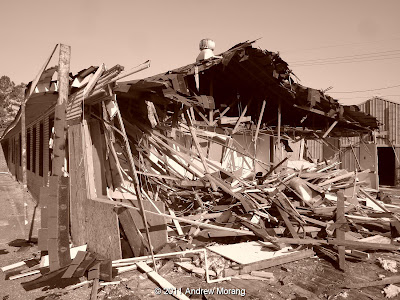 During the 1980s and 1990s, this part of Building 2025 was the supply depot, where you could pick up stationery supplies, field books, some tools, work gloves, and similar small items. Back then, pens and pencils had "U.S. Government" or "Federal" written on them. They even stocked fountain pens and ink (was it red ink?). At the end of the summer, students would raid the supplies and take off to college crates of diskettes and notebooks. Then they closed the depot, with the idea that it was cheaper to send a government employee to Office Max to buy supplies. So much for convenience or saving money.
Posted by Kodachromeguy at 23:00 No comments:

The Waterways Experiment Station (now known as the Engineer Research and Development Center or ERDC) is a 550+ acre army base in Vicksburg, Mississippi, located south of I-20 off Halls Ferry Road. The station was created by Congress in 1929 as a response to the great 1927 Mississippi River flood as a testing laboratory for the Corps of Engineers to build hydraulic models and study riverine processes. 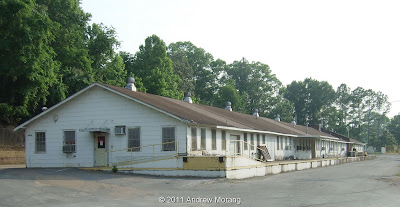 During World War II, the laboratory's mission expanded greatly in response to the war effort, and many temporary wood building were built for offices and workshops. One of these is Building 2025, used until recently as the Shipping and Receiving office. Sadly, it's time has come and it is being dismantled. 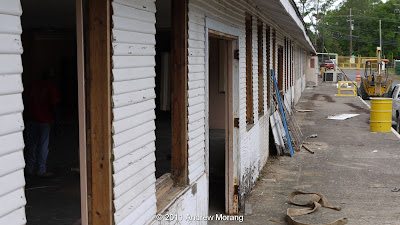 I am not sure why it will be demolished other than the typical problems associated with 60-year-old buildings, such as difficulty in maintaining climate control and possibly vermin.

I recall visiting Washington, DC, in the 1960s and at that time, there were still many clusters of these one-floor wooden "temporary" buildings still being used as government offices. Most have disappeared, so now you have to find them on remote bases off in the hinterlands. 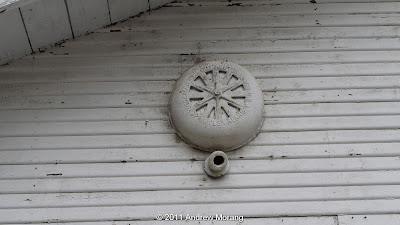 The work crew removed asbestos shingles that covered the original pine siding. A couple of the gents told me that overall the building was in excellent condition. The asbestos panels had preserved the pine siding and there was no rot or decay. 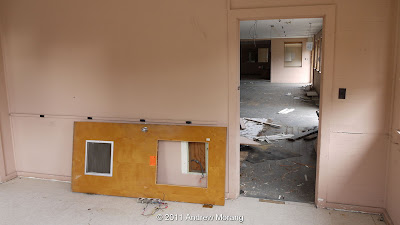 After 60 years, the ceilings and floors had not sagged at all. I am sure the joists were heart pine or cypress. I asked about recycling the wood, but the workmen said it would be too expensive to dismantle piece by piece. 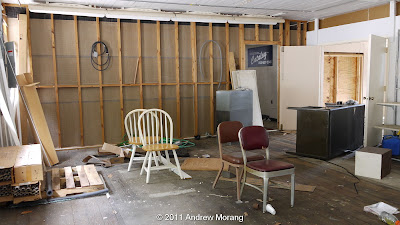 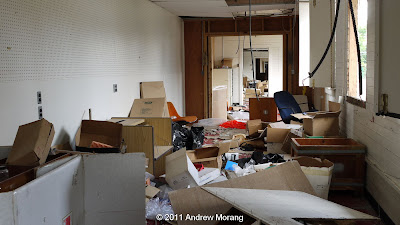 There is still a lot of furniture and detritus inside, but little is worth recycling. 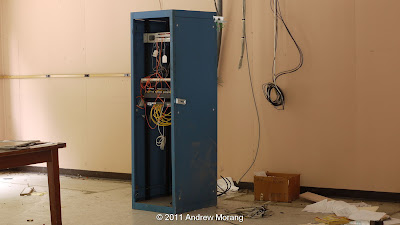 The walls were painted with industrial pink, possibly a bit more cheerful than the gross green you see in most institutional buildings. The blue box contained some sort of router for the computer network. 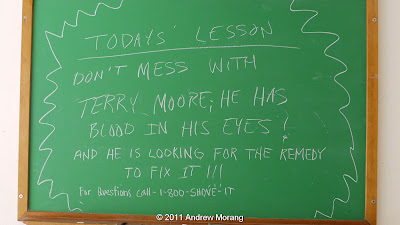 (All frames except for no. 1 taken with a Panasonic G1 digital camera with 14-45 mm lens, tripod-mounted.)
Posted by Kodachromeguy at 12:05 1 comment: