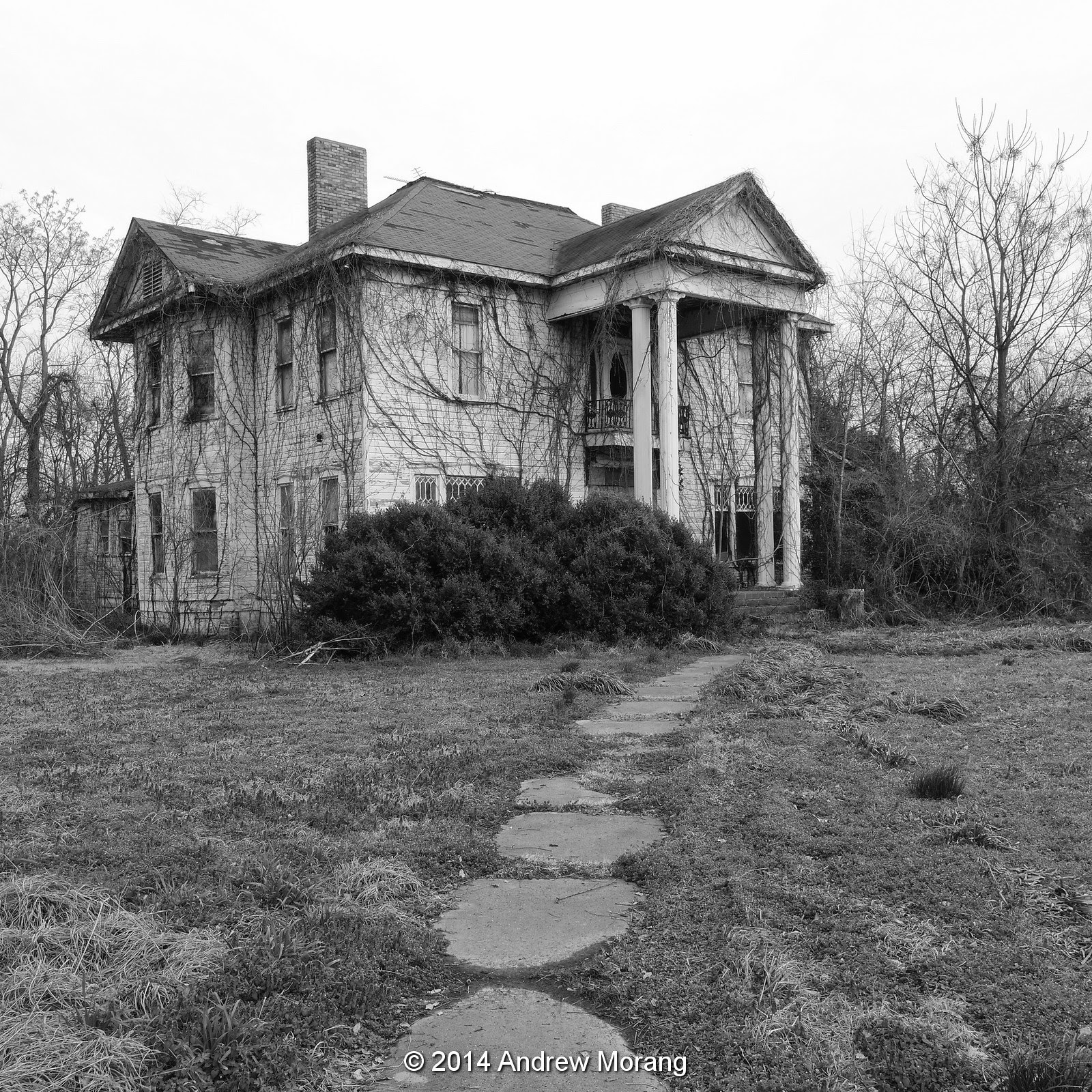 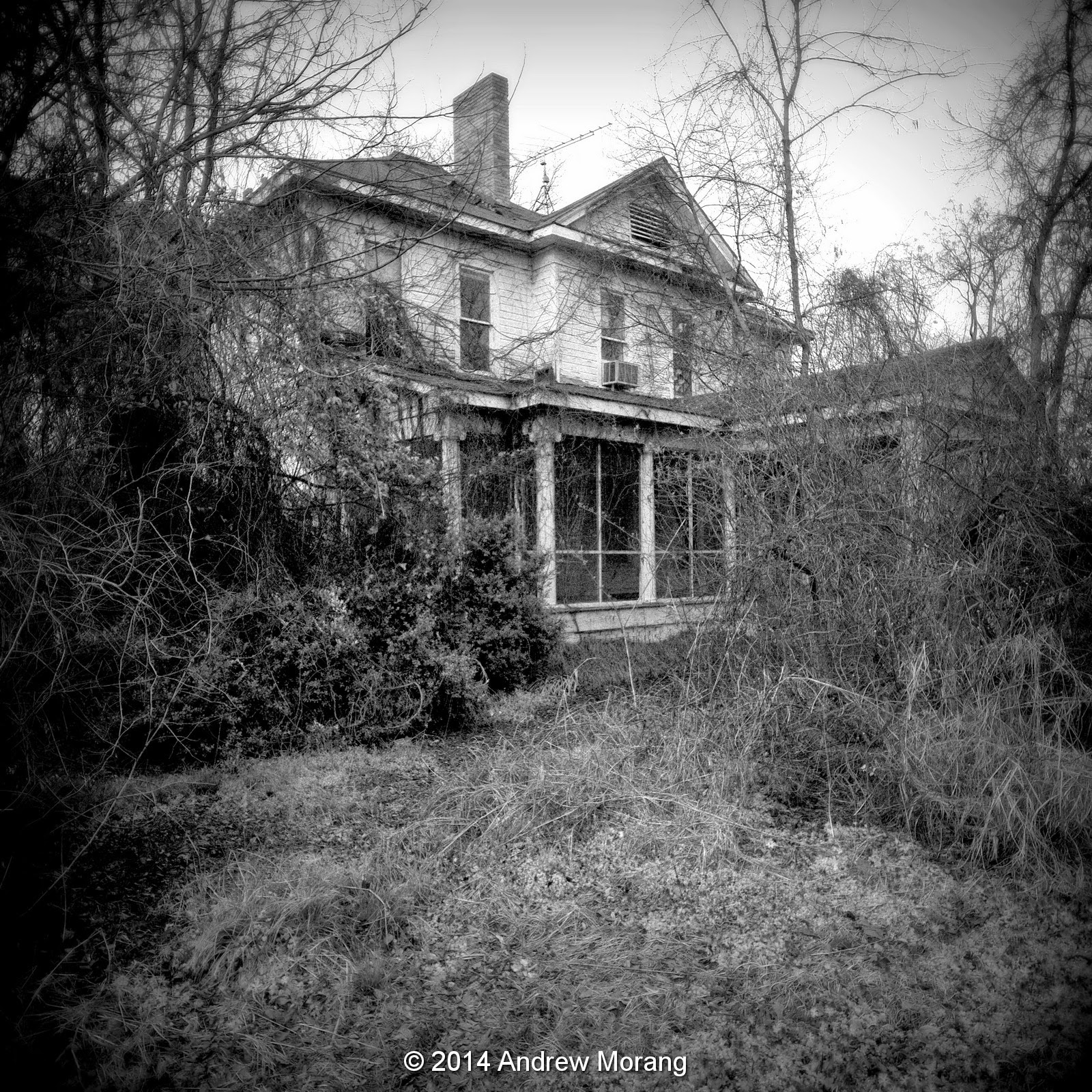 A handsome white wood house faces Lake Washington in the hamlet of Foote.  Known as the Susie B. Law House, it has been neglected for 5 or 10 years and is decaying quickly. The vines are taking over, but at least in spring, you can see some of the structure. 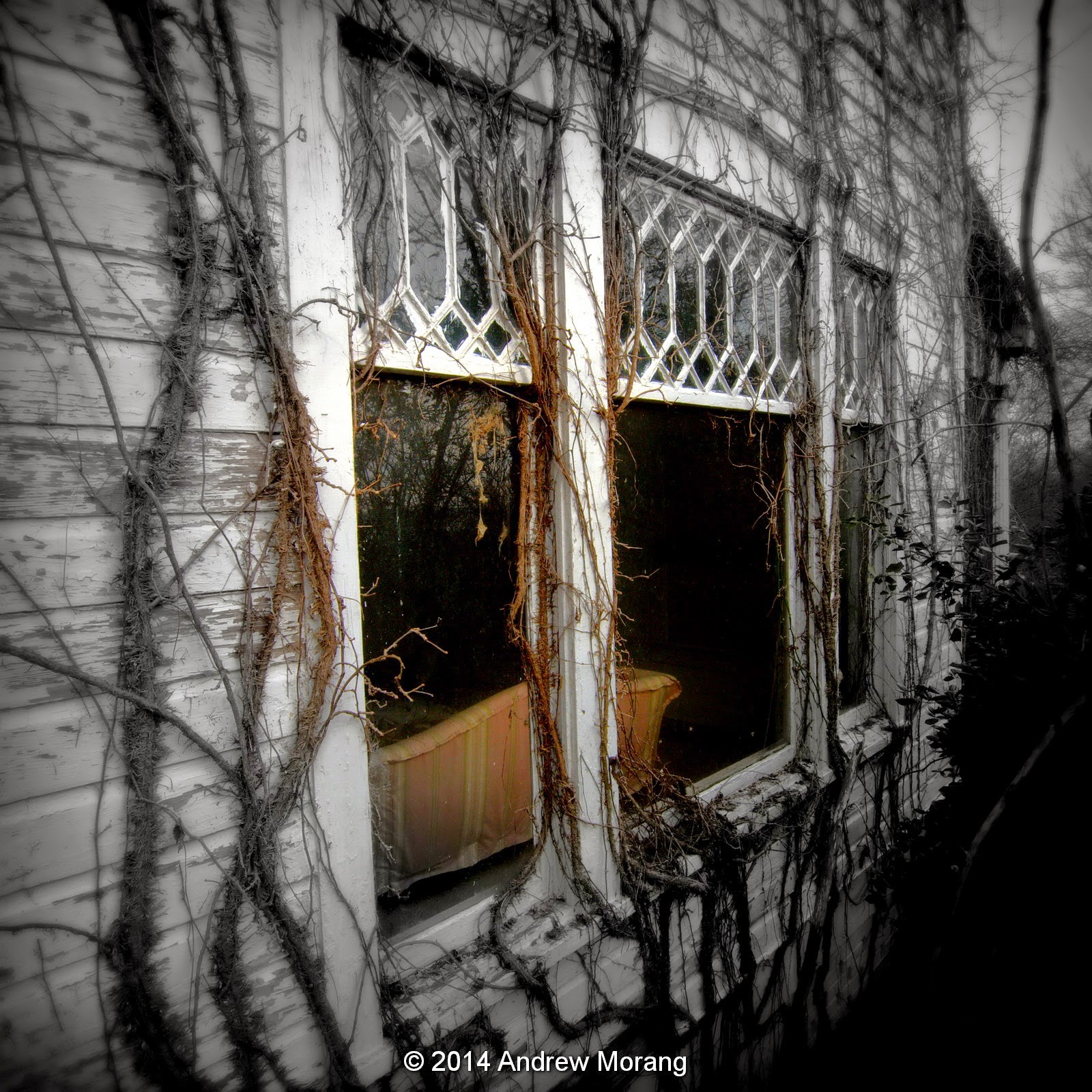 The house is reputed to have been a kit home from Sears, Roebuck & Company.  If it was a kit, you can see the quality materials and the handsome windows. A Wikipedia article cites this reference: Hall, Russell S.; Nowell, Princella W.; Childress, Stacy. 2000. Washington County, Mississippi. Arcadia Publishing. It may have been "The Magnolia" Colonial design according to Searshomes.org. I am often surprised that we drifted away from these well-made kits with precision parts from a factory, and returned to a construction method where workers cut bulk materials on site. This latter method suffers from a lot of waste material and inefficiency (and, very often, sloppy workmanship). Look at the typical modern McMansion: you consider that precision craftsmanship?? 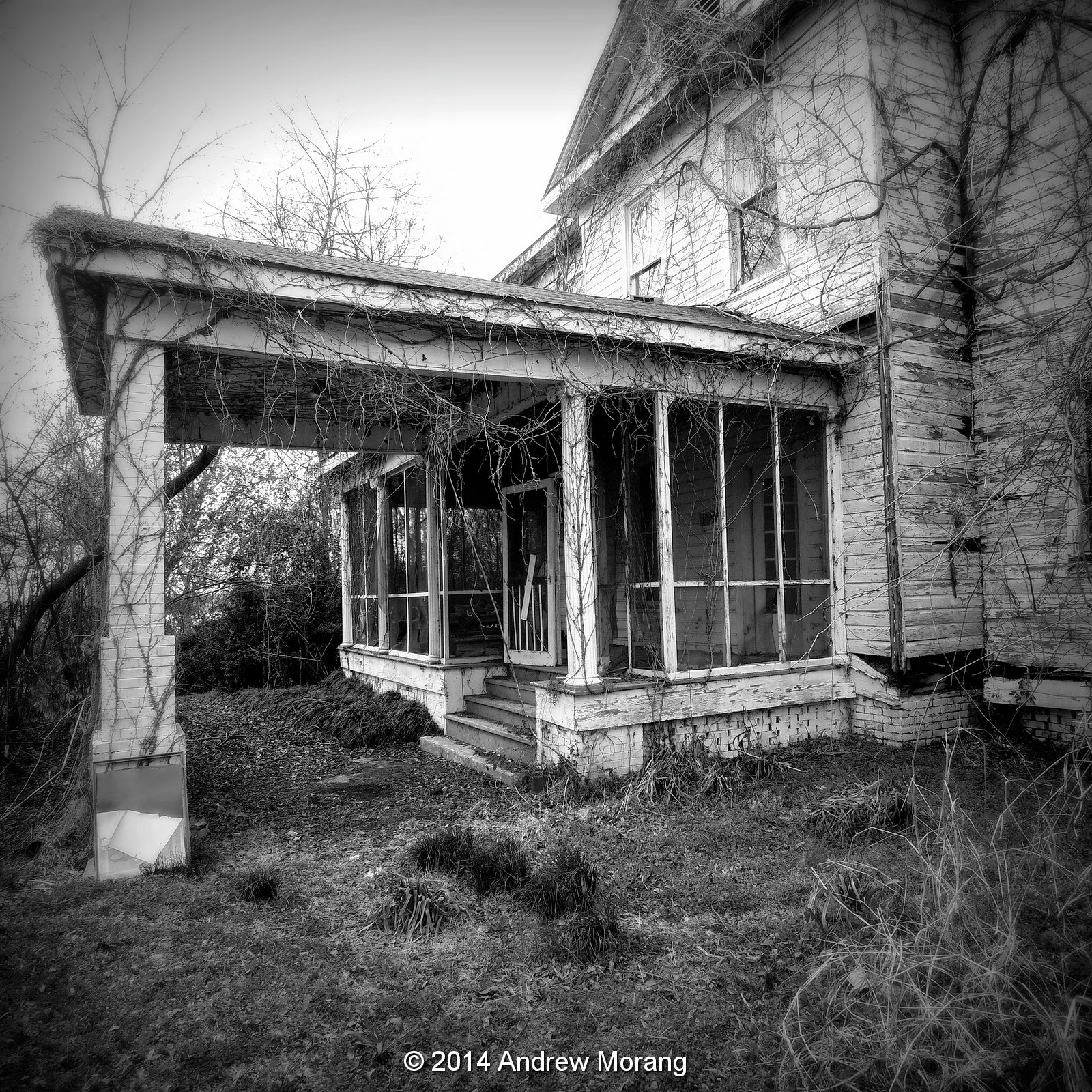 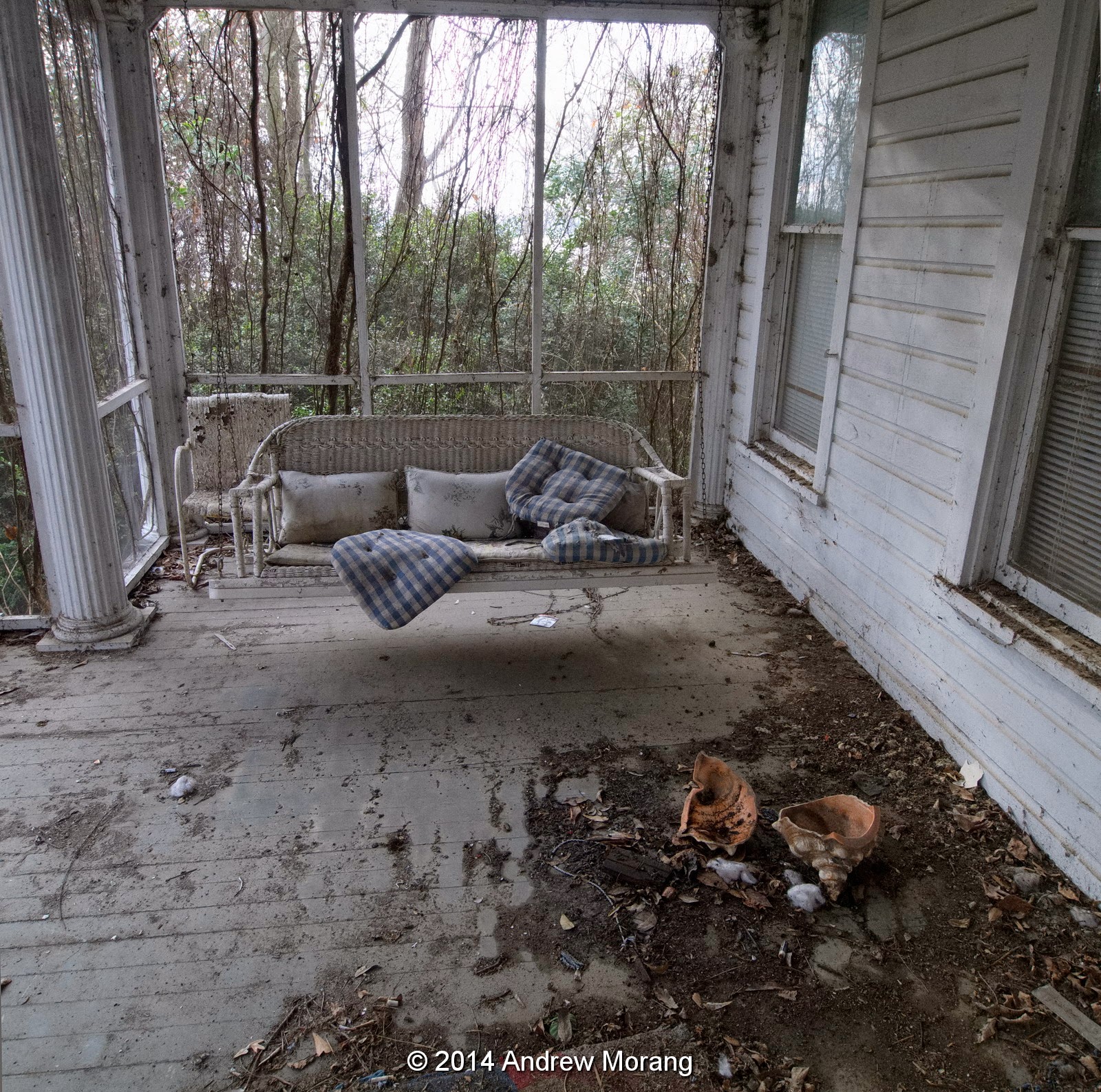 The breezeway on the side was designed to let you unload a car with cover from rain or sun.  Someone has been here in the last few years, and the pillows looked reasonably fresh. 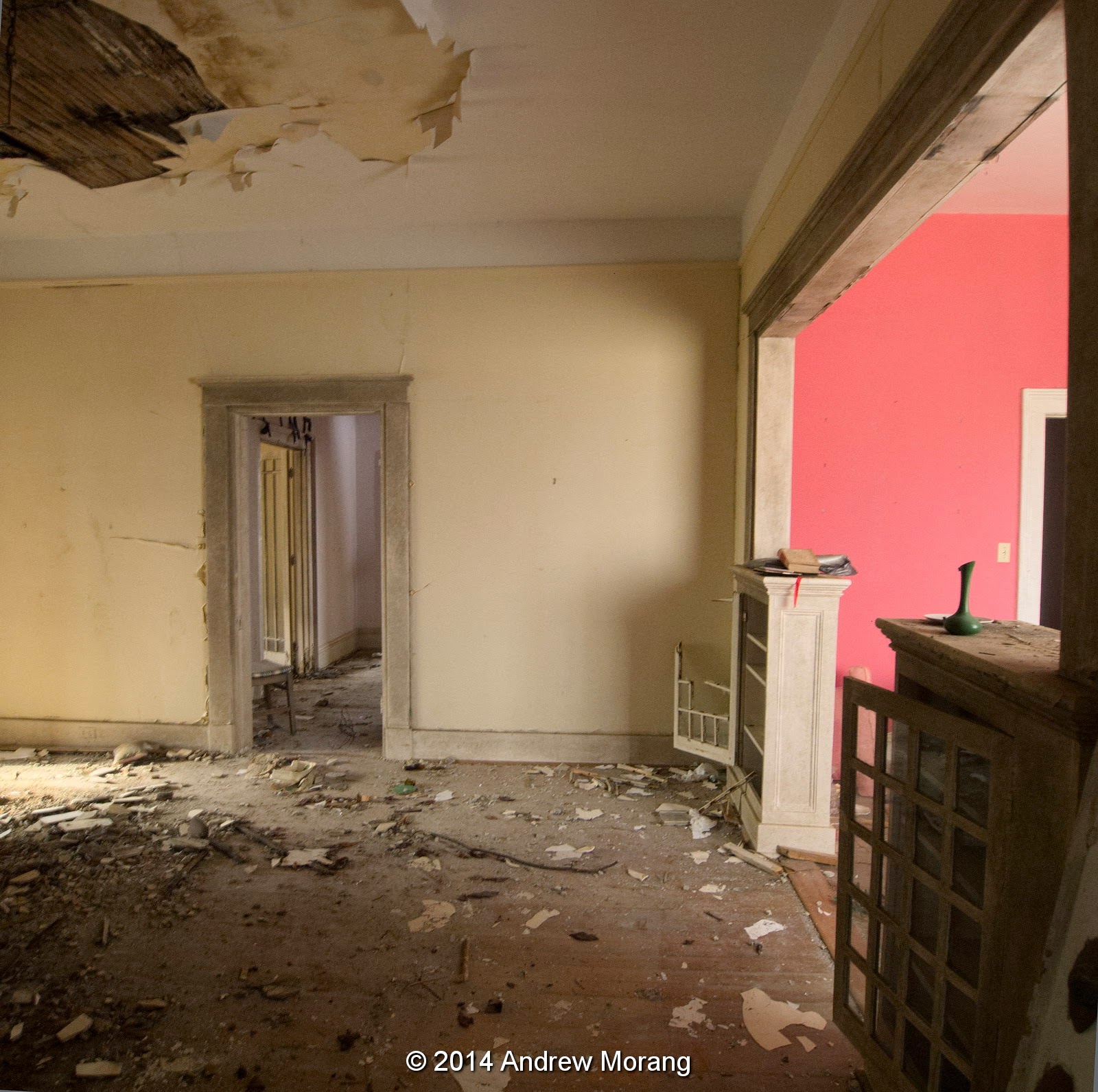 This was the only interior photograph I could take. A sign said, "No trespassing," so I did not venture inside. The roof is beginning to fail; see how the ceiling plaster is collapsing. It was plaster on wood lath. 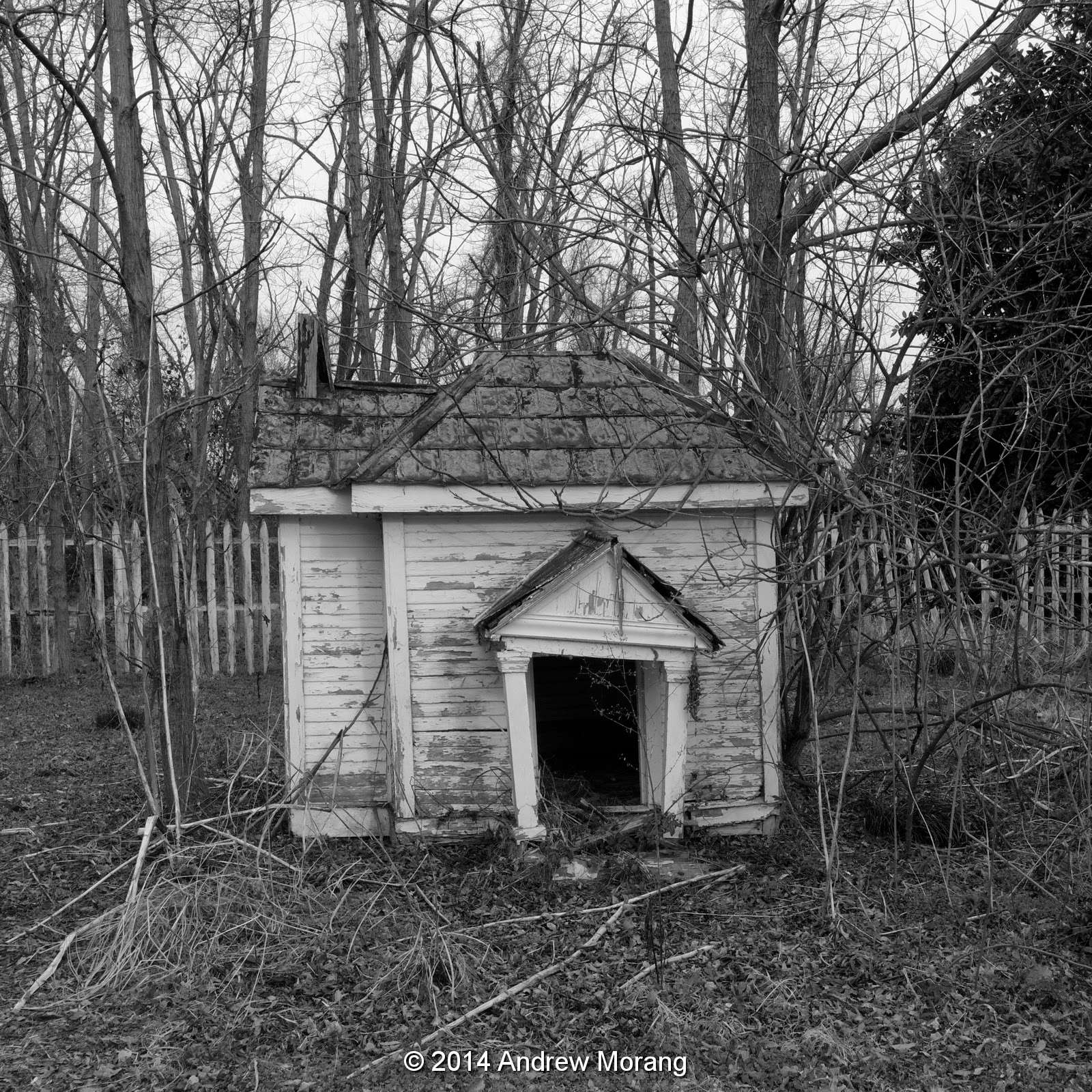 A little hut in the side yard matched the main house. Was it a child's play cottage? 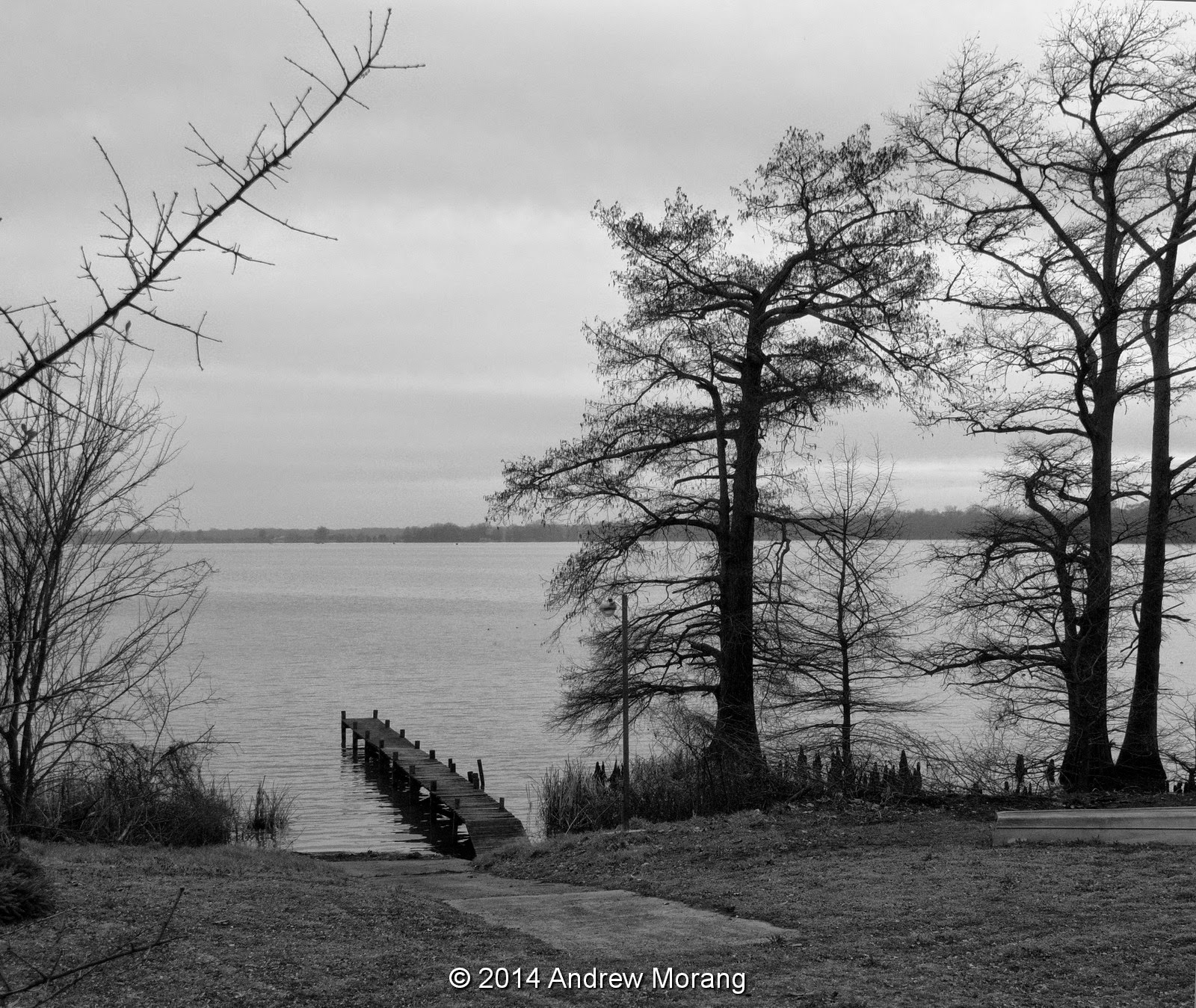 This is the view from the front yard of Lake Washington. It is a nice setting and superb for water fowl. Anhingas and Cormorants are common.

According to Wikipedia, the horror movie, Dark House, was filmed here in 2012. I have not seen it, but look at the official poster - it sure looks like the Law House. There is reputed to be a lot of paranormal activity here. Maybe I should return at dusk and take some more photographs....

Please click the link for some photographs of Mt. Holly, another decaying mansion just to the north.

Update: Click the link for some film pictures of the Law House.

Update Nov. 2018: a very interesting web page describes the Sears Roebuck manufactured houses from the 1908-1940 era. The variety was amazing. Another web page, http://www.kithouse.org, describes research into kit houses around the USA.
Posted by Kodachromeguy at 23:09 6 comments:

On the Waterfront: the Detroit River 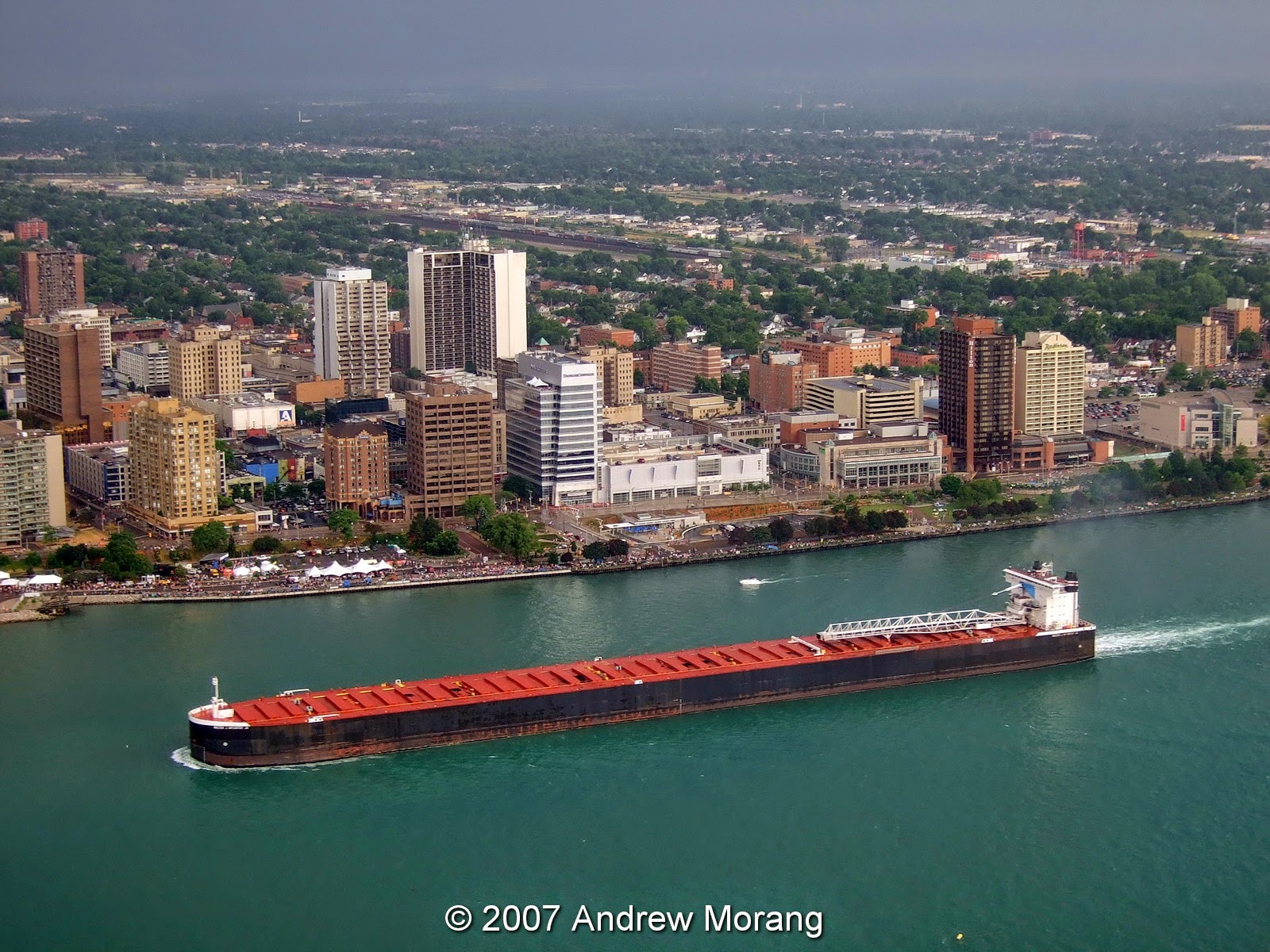 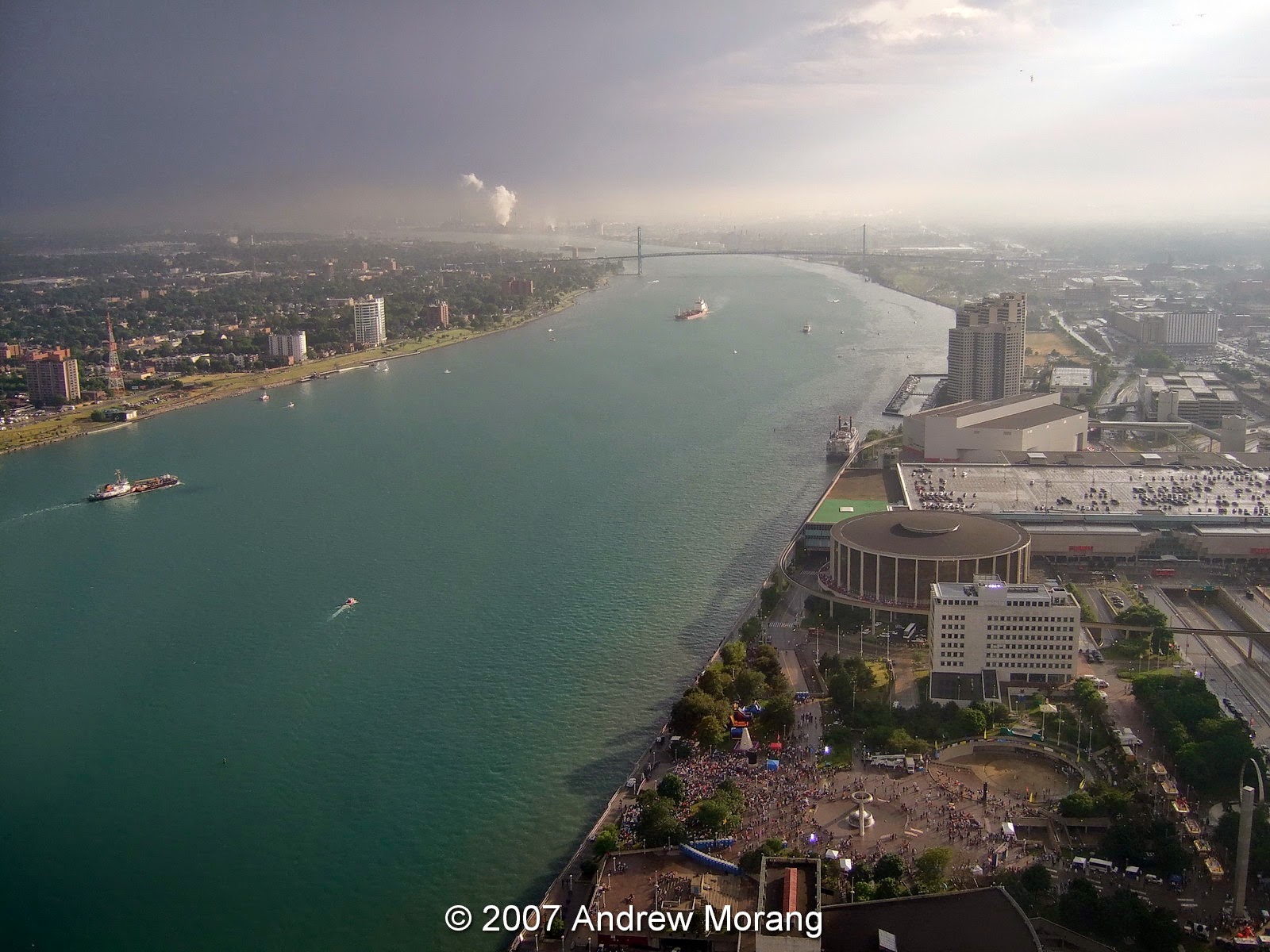 The city of Detroit is situated on the west side of the Detroit River. This river has great hydrologic, commercial, and ecological importance to the Lakes and the Upper Midwest. First, the river connects the upper Great Lakes (Superior, Michigan, and Huron) with Lake Erie to the south. This means that almost all the water from the upper lakes passes through this channel on its way to the lower lakes and, eventually, to the Atlantic Ocean.  The water flows southwest from Lake Huron via the St. Clair River to Lake St. Clair and thence through the Detroit River southwest and south past the city on the way to Lake Erie. (It is confusing, but one major water passage has two names.)

Second, the Detroit River today forms part of the most extensive inland deep-draft waterway in the world. The Great Lakes Waterway is also known as the St. Lawrence Seaway.  Ocean-going ships can penetrate from saltwater deep into the continent (all the way to Duluth at the west end of Lake Superior) and carry cargo without having to offload to smaller vessels. This is an immense economic benefit to reduce the cost of rehandling. Most other extensive inland waterways, such as China's canals, the Rhine, the Danube, the Volga, and the Mississippi north of Baton Rouge, are shallow-draft, meaning designed for barges and inland vessels. They typically only have draft of 6-9 ft. But, the Federal Navigation Project in the Detroit River has a project depth of 27 ft, which is maintained by dredging.  Therefore, much larger cargo vessels can ply the Great Lakes and carry bulk materials such as coal, iron ore, gravel, cement, corn, wheat, and bulky manufactured goods. Panamax-class container vessels cannot enter the Lakes, but lesser-draft lake and ocean vessels have passage most of the year (depending on ice cover). There have been proposals to enlarge the locks along the St. Lawrence Seaway and deepen the channels sufficiently to allow Panamax vessels to carry cargo all the way into the Lakes, but such a project would cost billions and takes decades. It is unlikely this will ever happen.

As far as I know, there are only four deep-draft inland waterways in the world:
Possibly you could include the Thames, lower Mekong, and the Port of Rotterdam to this list, but I think of these as dredged river mouths rather than an improved system with locks and/or major dredging to allow ships deep into a land mass.

Third, the Detroit River is of major biological importance because its fishery resources move freely across the boundary between two nations (Canada and USA), and represent millions or billions of dollars in revenue each year to each nation. 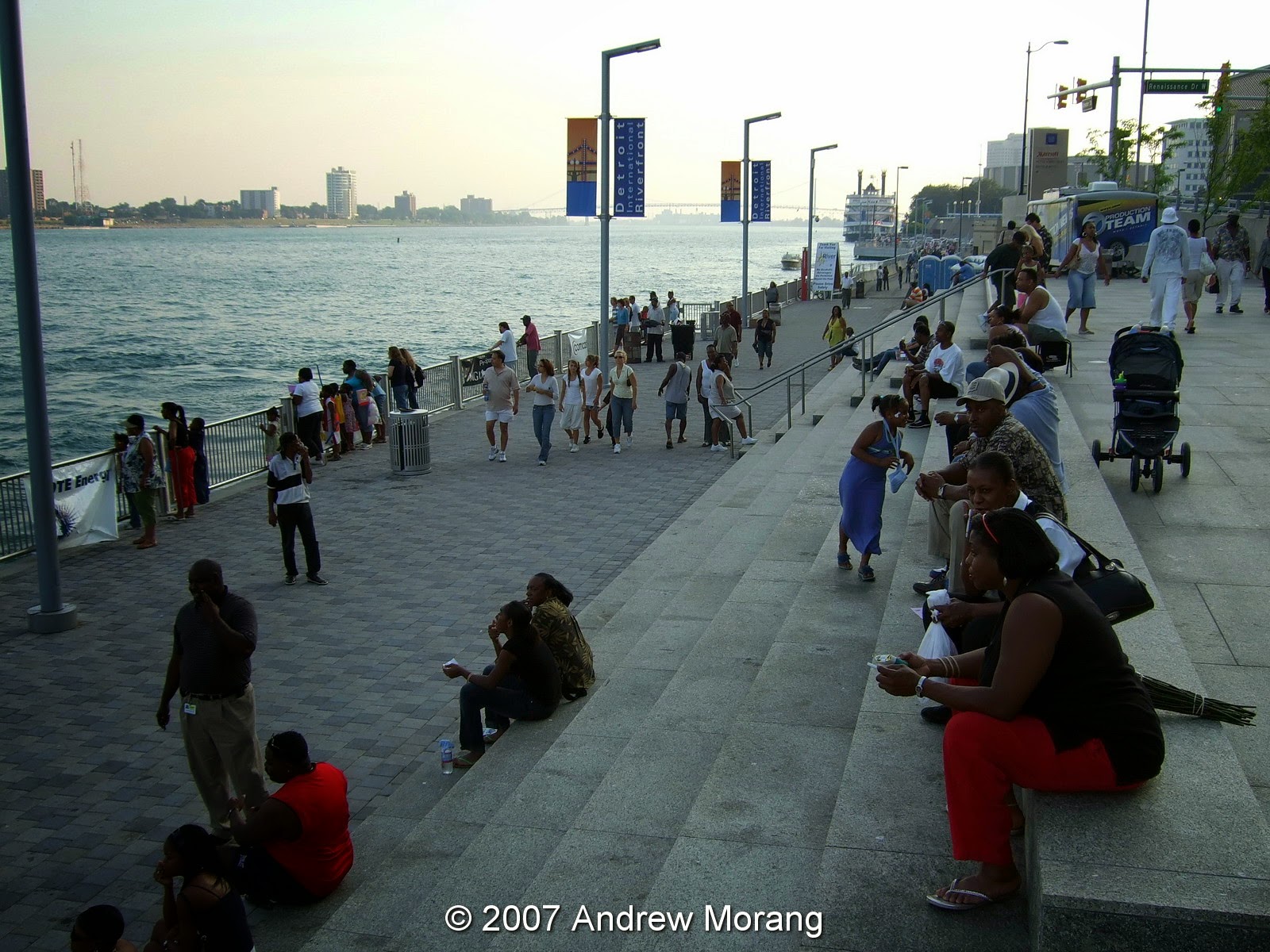 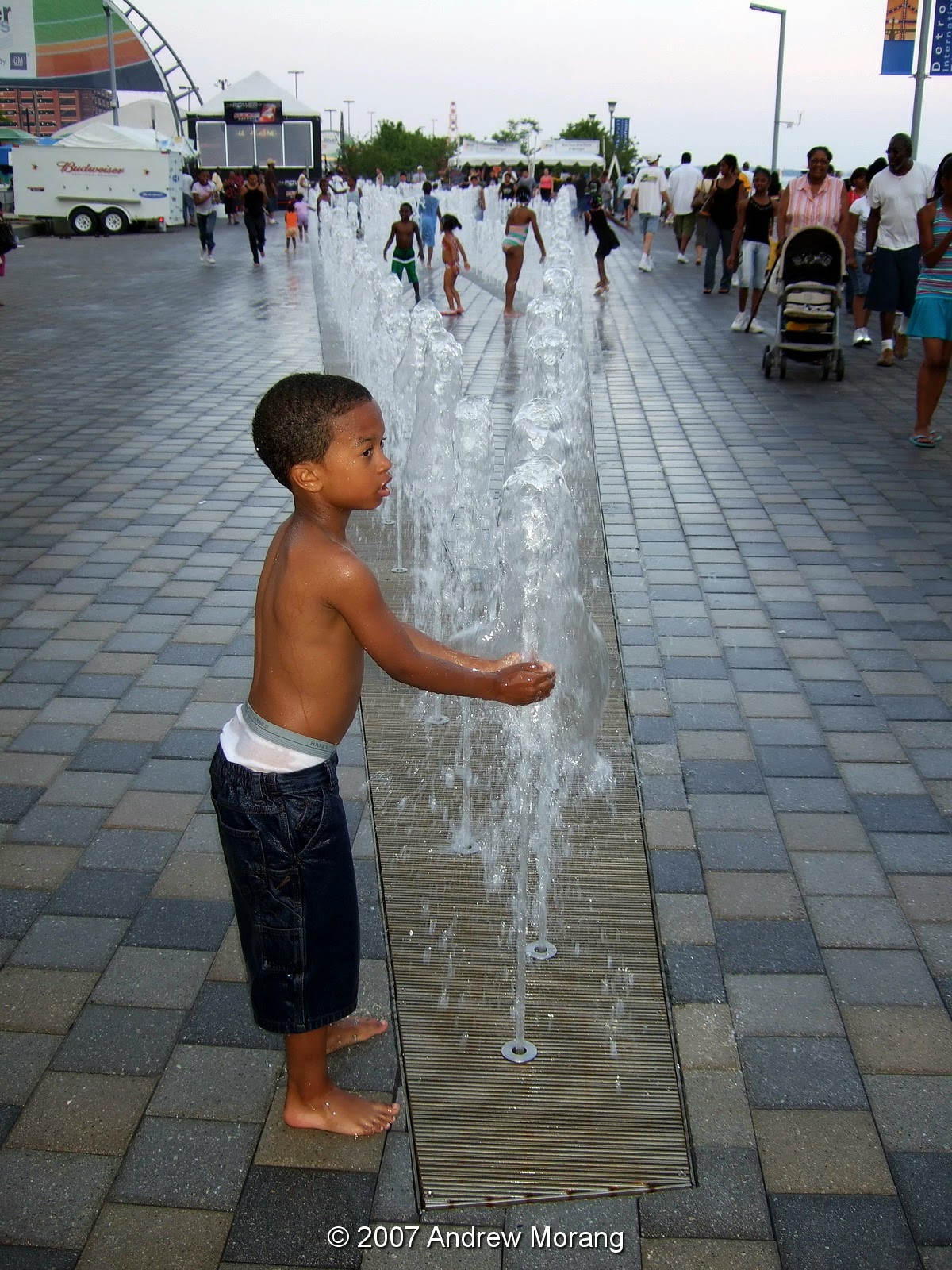 The Detroit riverfront was formerly an industrial area of warehouses and factories, but has been converted to recreational use in the last decade or so.  It is really pleasant on a warm sunny evening to walk along the embankment and watch ships pass and people enjoy themselves. 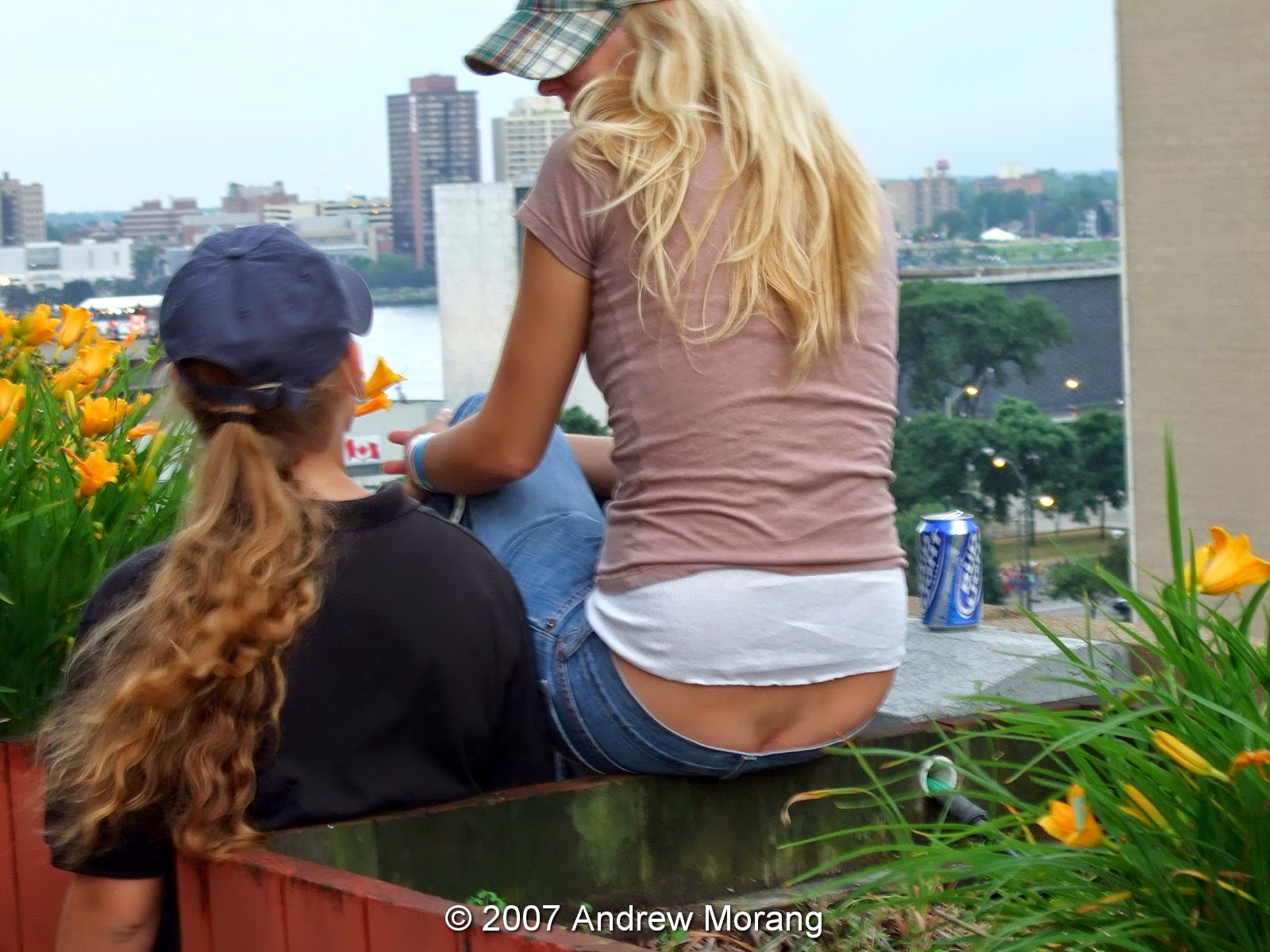 Interesting people hang out on a summer evening. 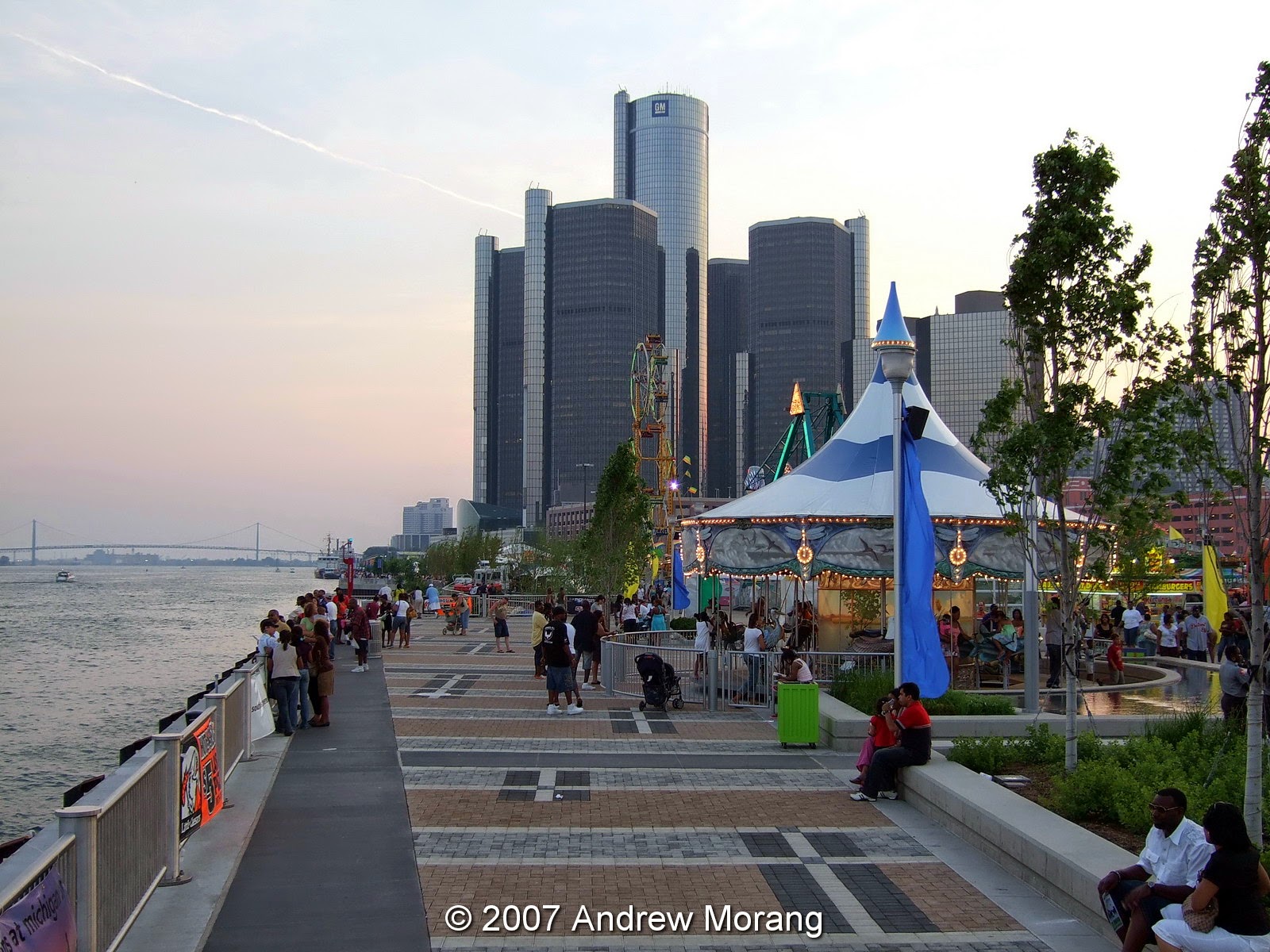 The complex was originally conceived by Henry Ford II and other businessmen in 1970 as a way to forge a Renaissance in downtown Detroit.  We think of Detroit's calamitous decay as being a recent phenomenon, but deep trouble was obvious as early as the infamous 1968 summer riots, when many blocks of tenements burned. Businesses moved out from downtown, and serious decay set in. The hotel opened in 1977, and Ford originally occupied some of the office space. General Motors bought the complex to use as its world headquarters in 1996 and completed a 500-million renovation in 2004. Somewhere in the towers is the now-infamous private elevator for use by top-level executives so that they could emerge from their cars in their private parking garage and get whisked up to the executive suites without having to mix with lowly GM engineers and mid-level managers. Imagine having to mix with engineers and hear technical details about your product. 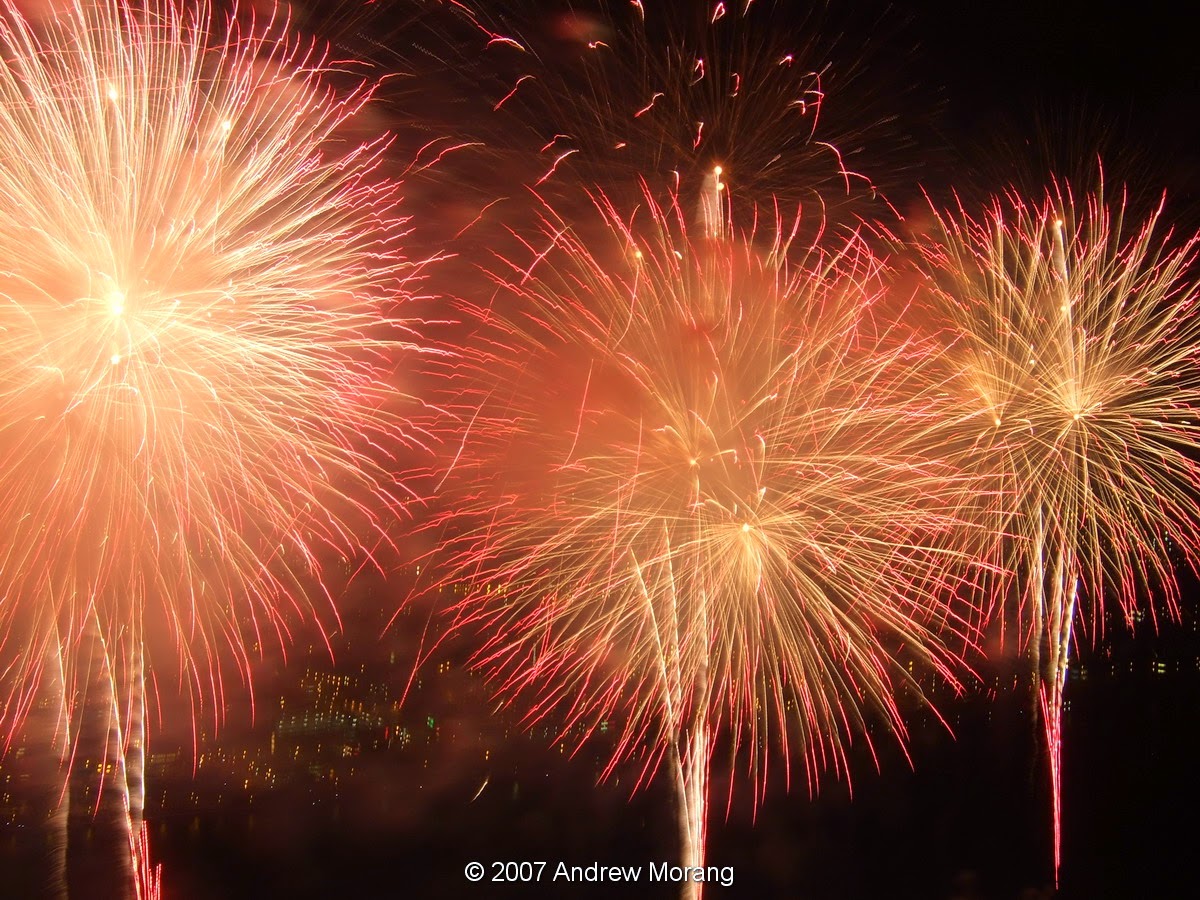 Fireworks over the river are awesome if you have access to an upper floor in the Marriott. As I recall, I was invited to a suite rented by a dredging company. Most of the guys drank, but I took photographs. 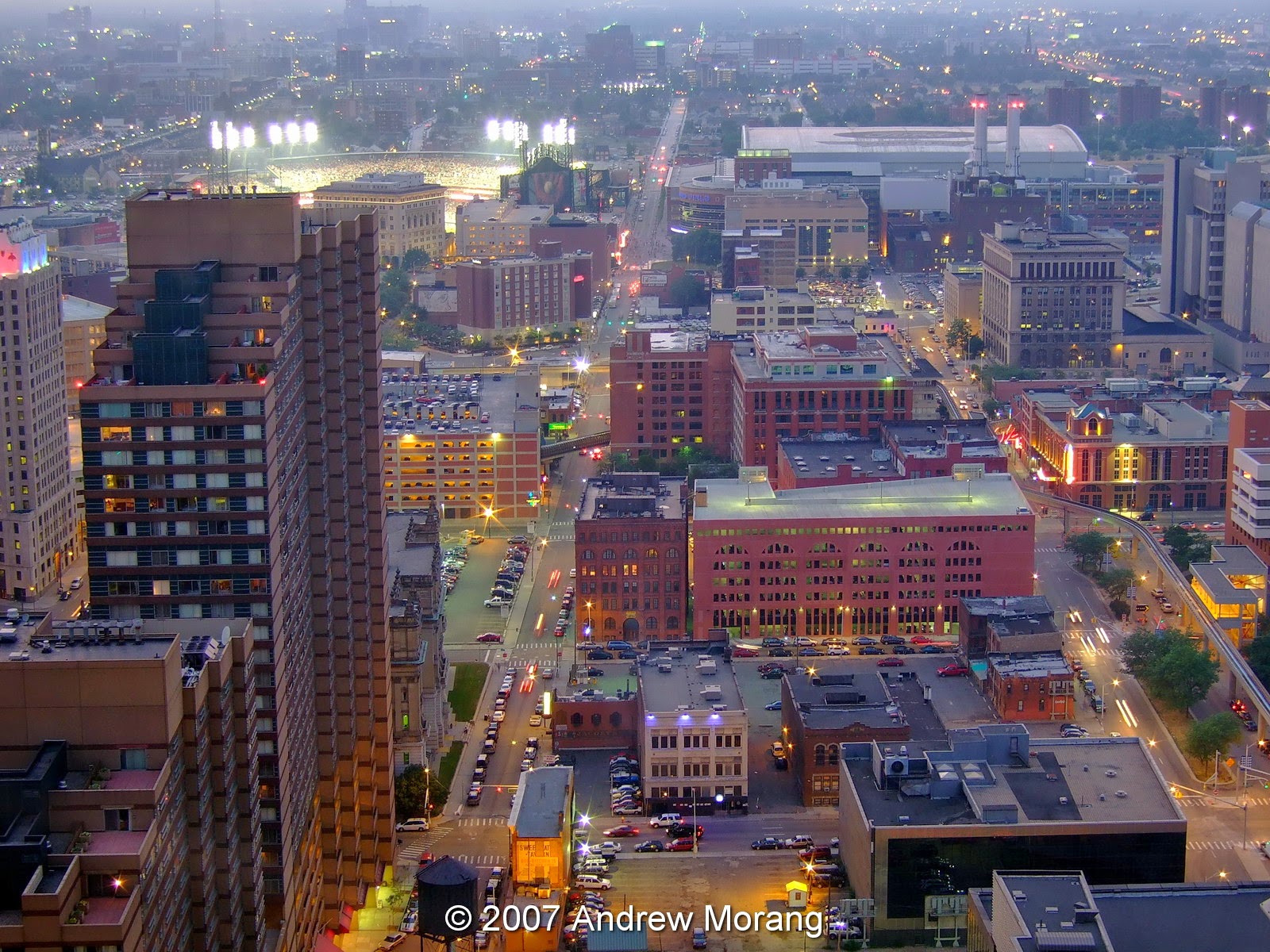 The view inland is not as interesting as the view over the river. The terrain is flat, and you see office buildings and warehouses. This area looks reasonably prosperous and is well-policed because of the tourist trade - you have to drive inland and north to see the blocks with burned-out homes and empty lots reverting to prairie. 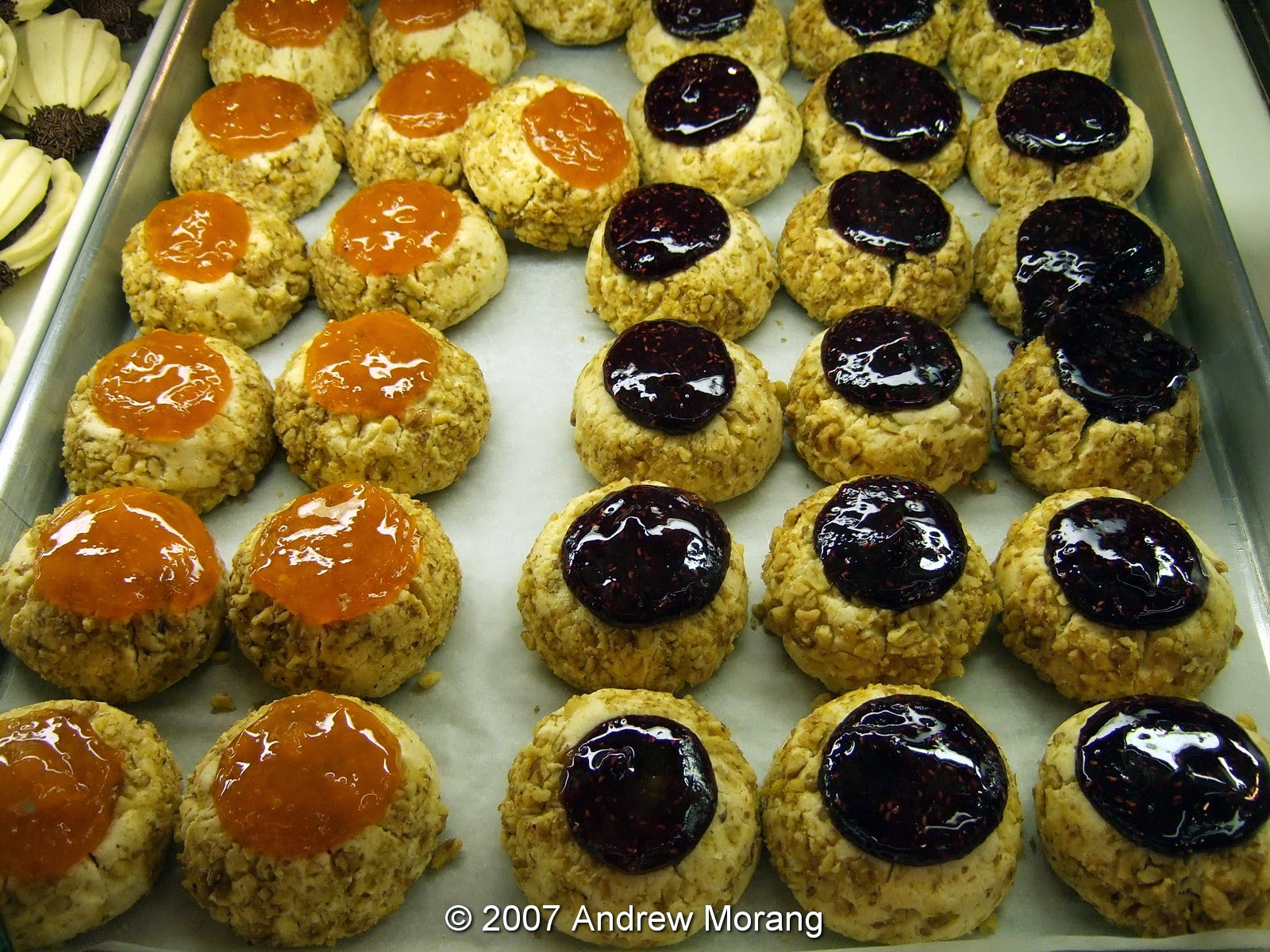 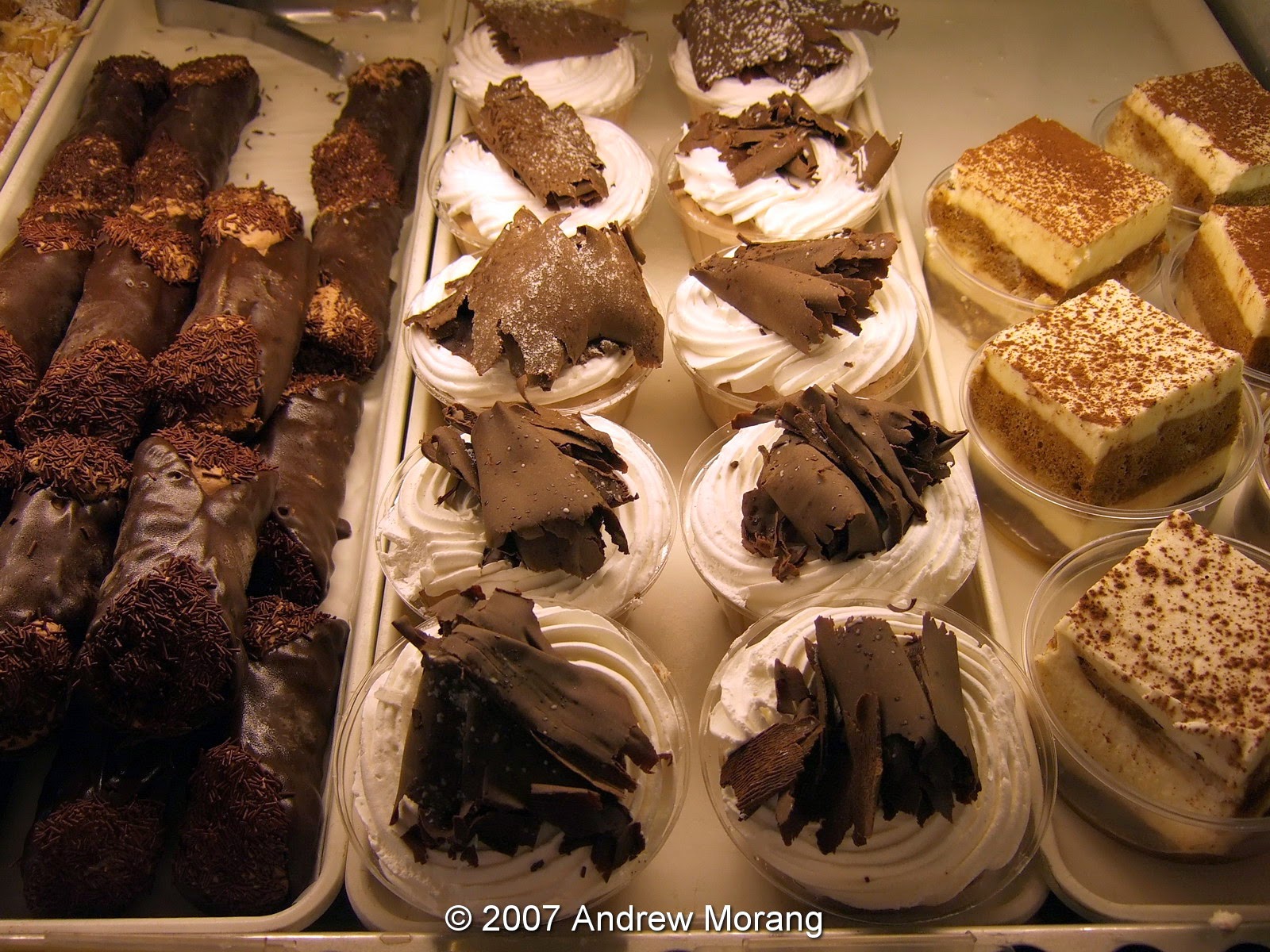 Just a few blocks to the west is Greektown, a block of restaurants and stores with a Greet theme. As I recall, downtown Detroit used to be a food desert, but in Greektown, you could get a good meal and finish off the evening with a pastry - or two - or three.


Posted by Kodachromeguy at 10:40 No comments: 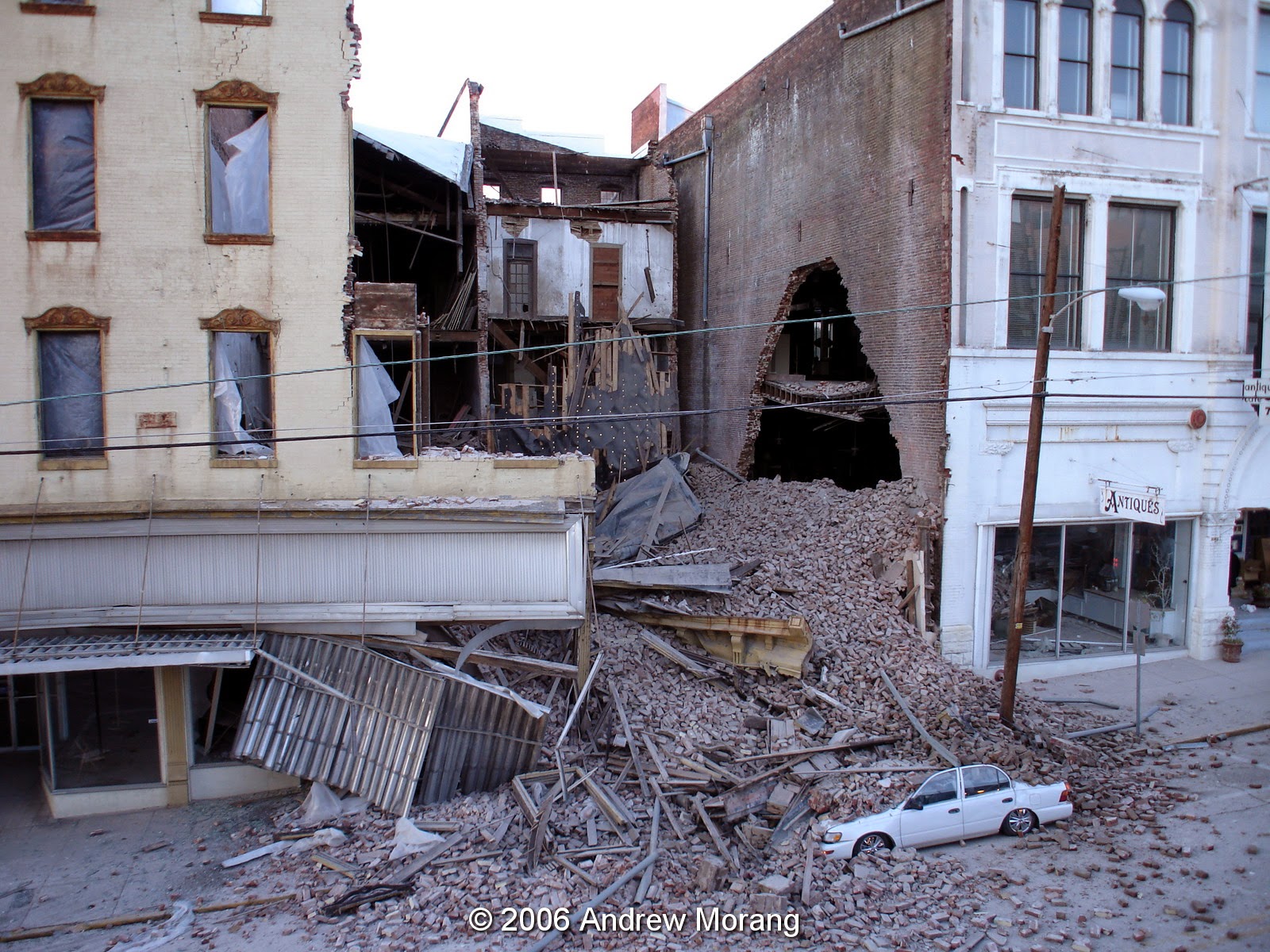 Long-term readers may remember that in 2011, I summarized the sordid story of how the late-1800s commercial building at 515 Clay Street, Vicksburg, collapsed in January of 2006. Fortunately, no one was killed, but a car was squashed. Thereafter, the City of Vicksburg and the owners of the building fought in court for years about whether they could demolish the remains, and Clay street was partially blocked for months with a pile of bricks. It was a comedy of errors. 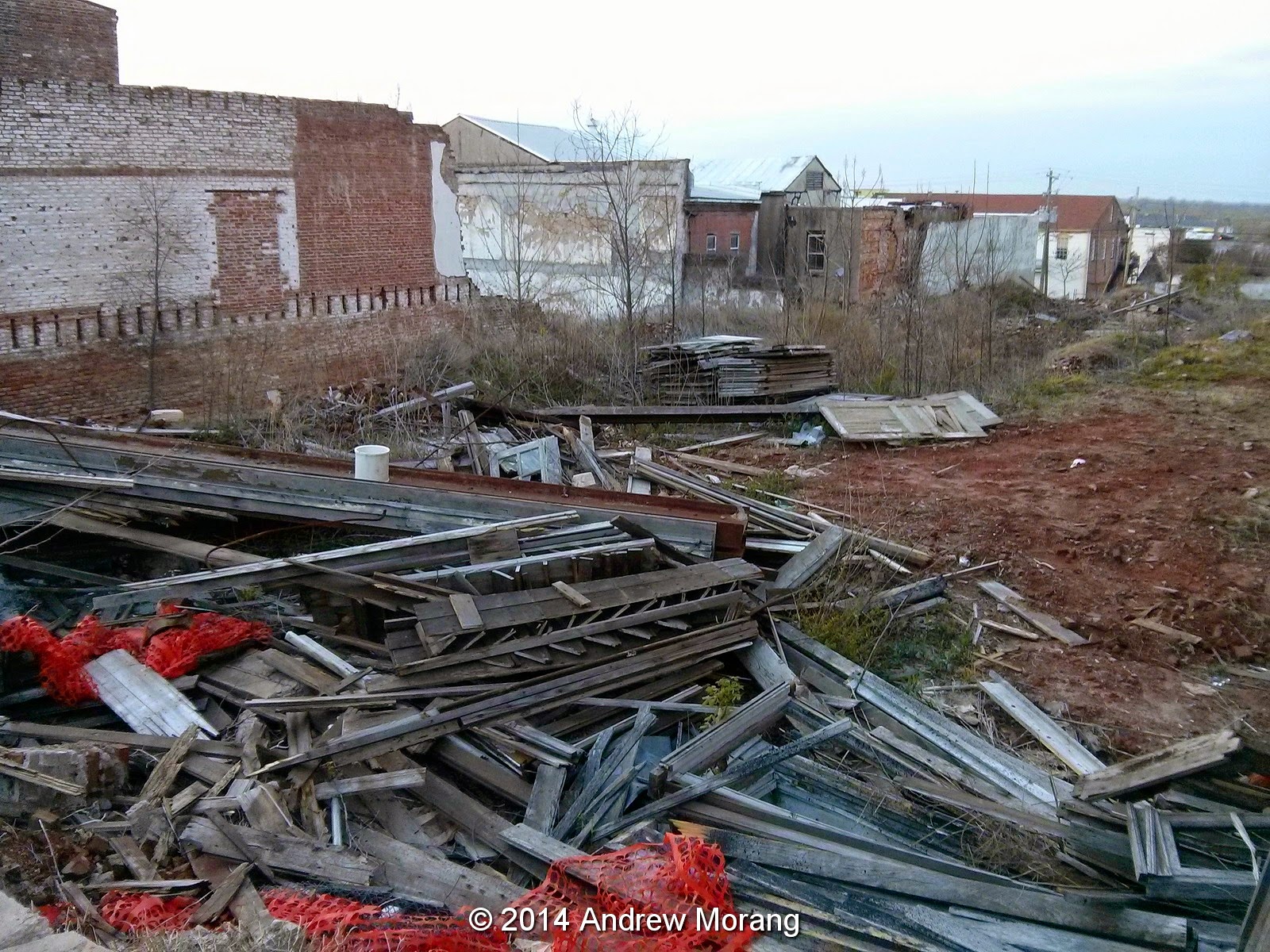 Well, eight years later, the street is clear, but there is still debris in the old lot. This is a view looking north across the lot. 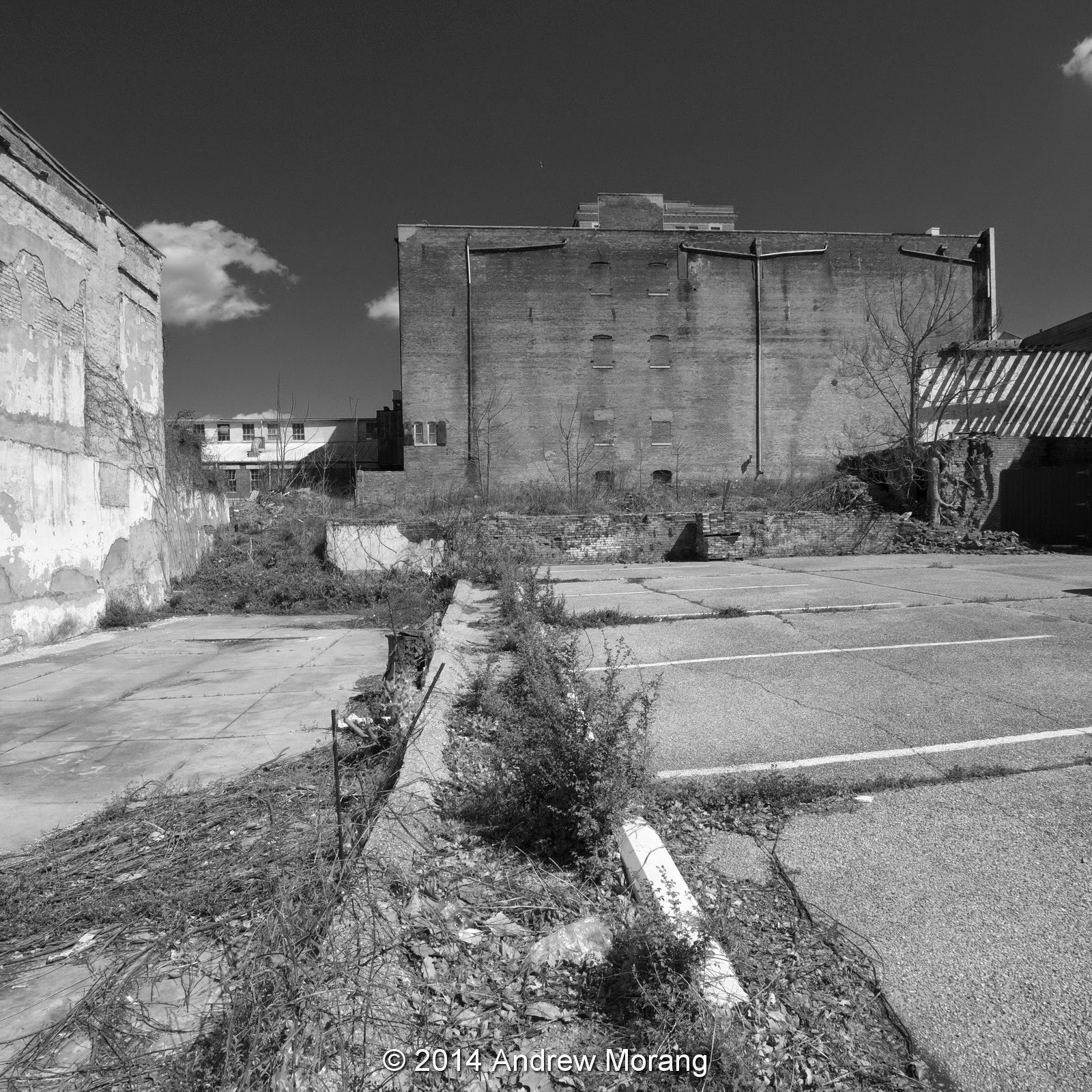 This is the view from Clay Street looking east to the site where 515 Clay once stood. The building in the back is the Adolph Rose Building. 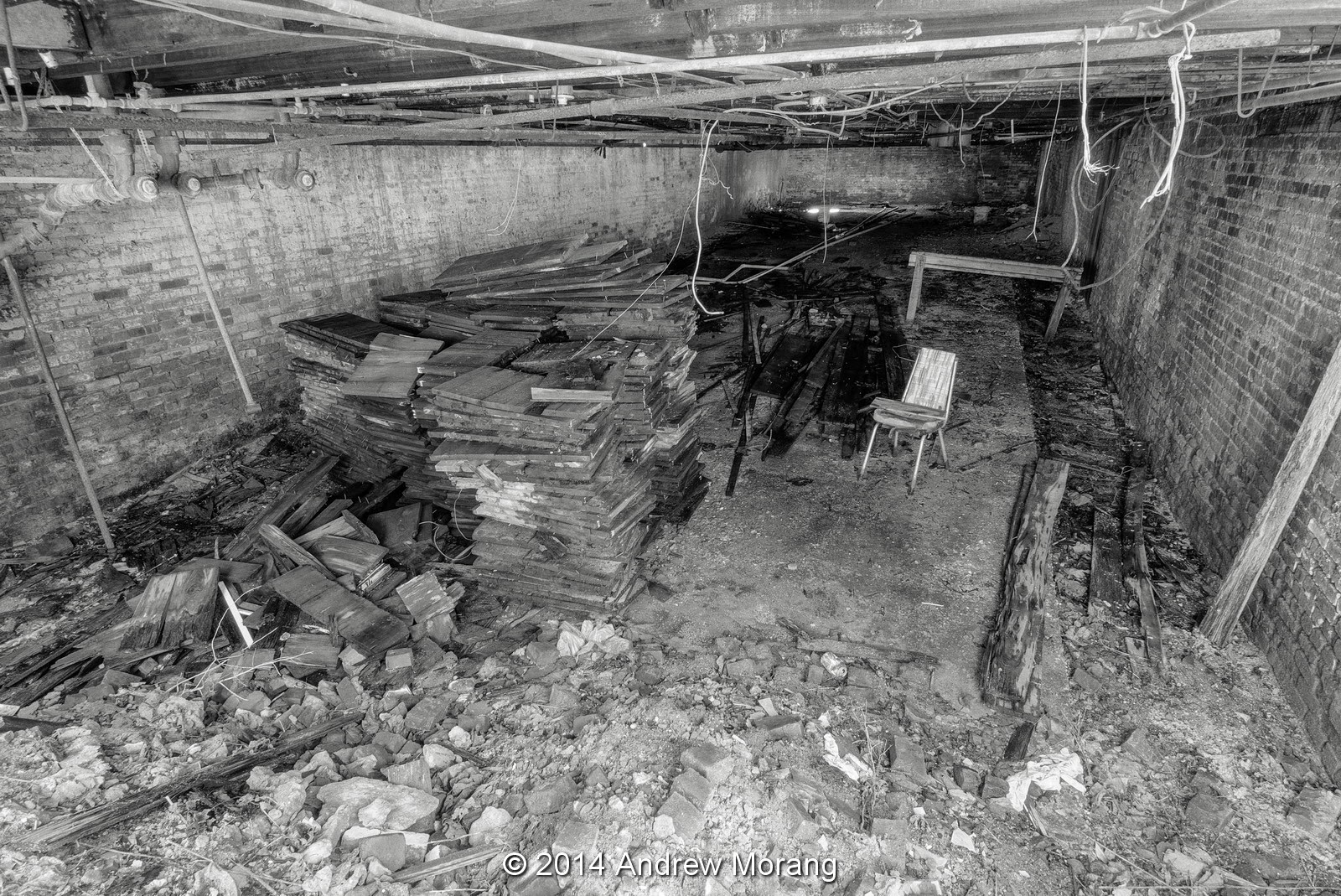 This is a portion of the basement that survived. 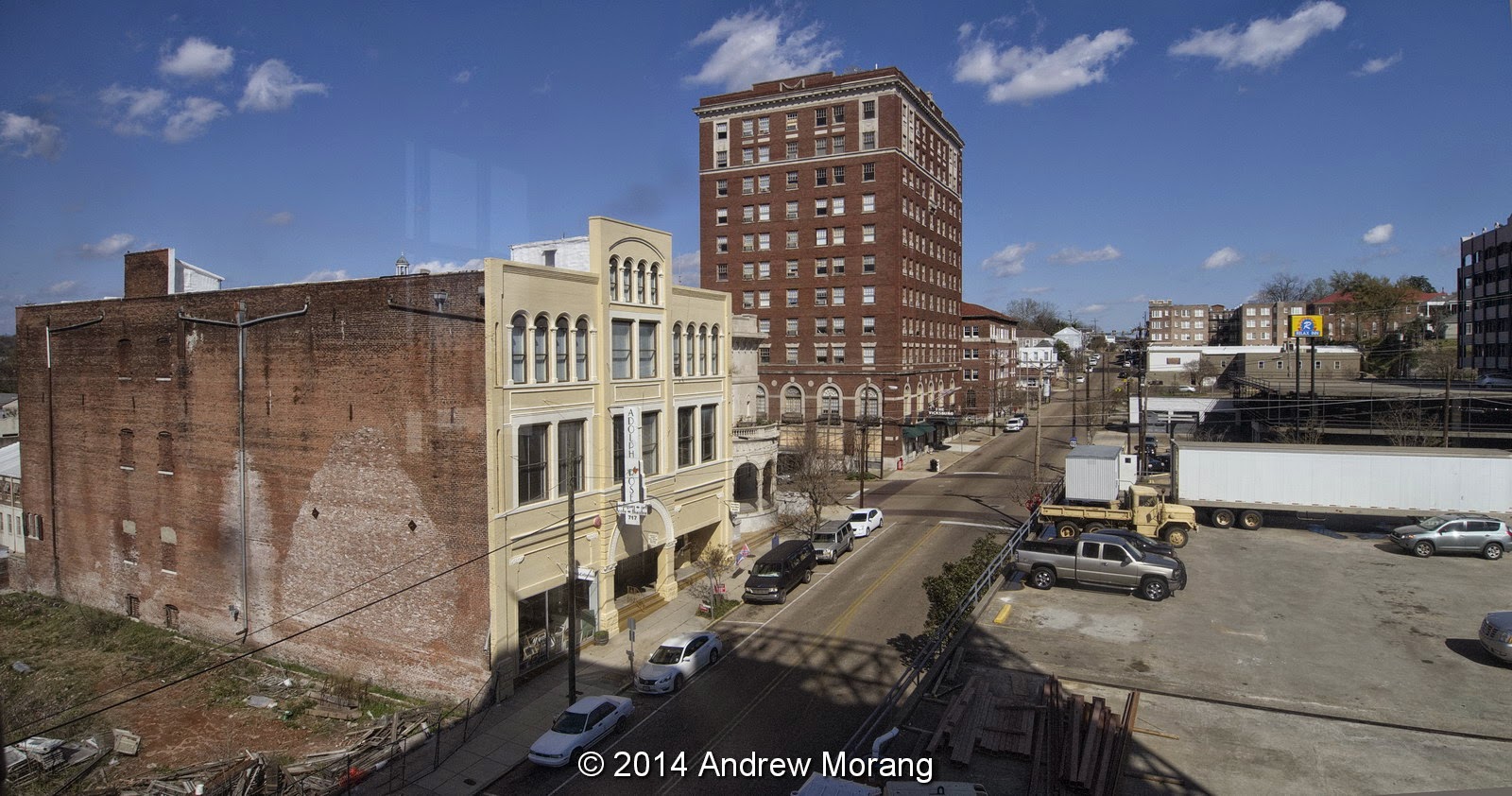 This is the view east along Clay Street from the newly renovated 1903-vintage First National Bank building. Some very nice apartments, known as The Lofts, have opened there and will offer high-end downtown residences. It is nice to see the downtown revitalized.  The Adolph Rose building, in the center left, lost a big section of brick wall when no. 515 collapsed (see the first figure). The light-colored section of bricks shows the repaired section. As another example of revitalization, the old Strand Theater in the basement of the Rose has reopened. The Strand, operated by Westside Theater Foundation, offers independent international films. I wrote about the Strand in a 2011 article. Folks, support your downtown businesses and merchants! 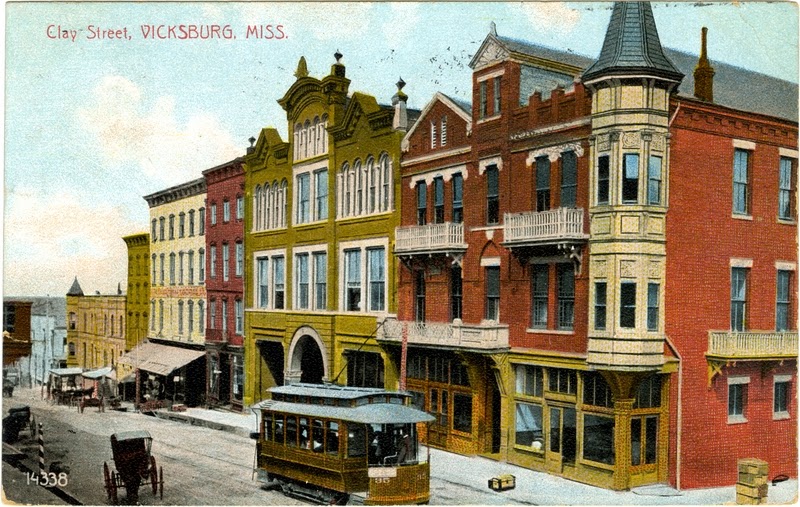 Aug. 24, 2014 update: here is a post card from the Mississippi Department of Archives and History. It is an undated view of Clay Street with the Adolph Rose building in the center of the block, behind the trolley car.