The Walsers descended from Germanic peoples over 1000 years ago and settled throughout the Alps.   They usually settled in remote, higher-altitude valleys (above 1500 m), particularly in the region around Monte Rosa, a major mountain massif on the Swiss-Italian border east of the Matterhorn. In return for maintaining and harvesting inhospitable Alpine lands, the Walsers were typically accorded a relative degree of freedom and were able to form communities with a high degree of sovereignty. As a result, they preserved their ancient German culture, traditions, and language.

The villagers of the isolated Walser communities had to work hard to survive the harsh Alpine weather and long, snowy winters.  They had to clear timber, till the rocky soil, shape the land into meadows and fields, build houses, and produce everything necessary to feed their families and animals during the long winters.  The difficulties in transport and their isolation made them fiercely independent and proud.  Among their cultural characteristics are their farm houses. 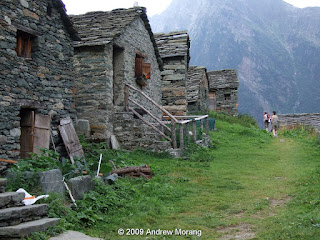 This is Alpe Planmisura at altitude 1782 m in the Valle d"Otro.  It is a steep 1000 m drop from the Col d'Olen at 2881 m (you need strong knees).  This little town featured stone architecture and is still partly occupied in the summer. 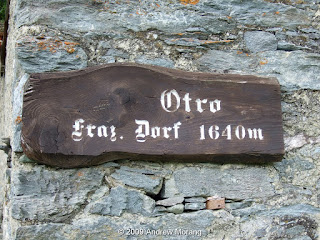 One of the better preserved examples of a Walser village is Otro Dorf at 1640 m, also in the Valle d'Otro 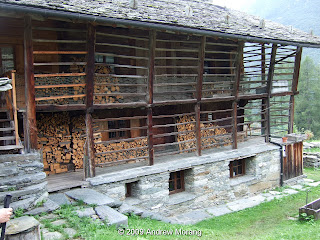 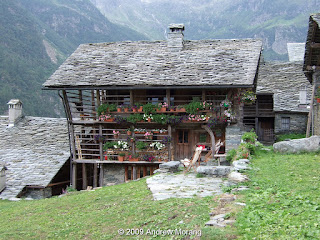 In Otro, the houses have characteristic Walser wood and stone construction, with wide porches and broad roof overhang.  The porches were used to store wood and hay and protect them from rain and snow. Consider, until the late 1800s, these villagers were probably almost totally cut off from lower-altitude valleys and had to be self-reliant. Preserving wood and grain made the difference between staying warm and the cattle surviving long, harsh winters.  Also, winters were longer and colder in the 1800s, as Europe slowly emerged from the little ice age. 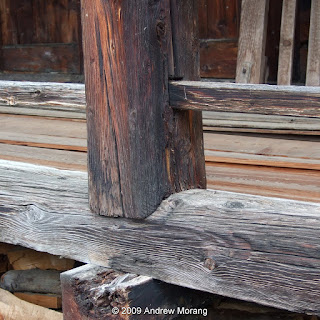 The wood was worked with hand tools and fitted with very few nails or machine-made fasteners. 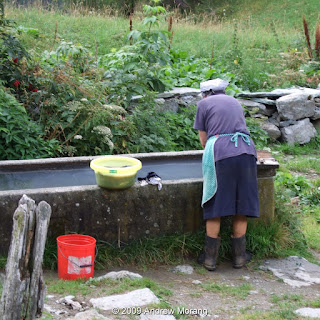 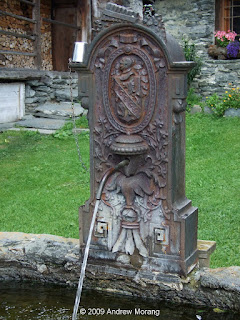 At least, pure cold water was plentiful.  Washing clothing by hand in a stone tub was hard work. 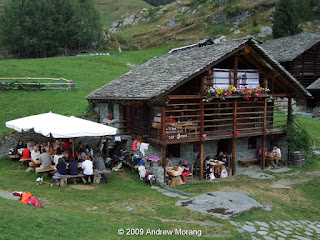 After a long day hiking, the Refugio d'Otro offers a tempting place to stop for the night or eat a weekend luncheon feast, as these 50+ trekkers can attest.  Home-made pasta, wine, garden-fresh vegetables, more wine, espresso, pastry - hard to keep trekking after this. 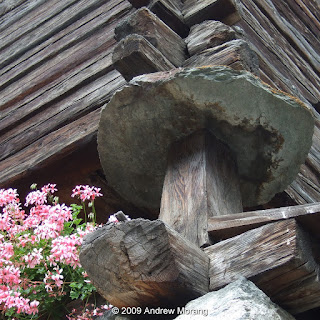 Finally, another architectural note.  This is an example of Walser construction in Zermatt (the sophisticated tourist resort).  The wide circular slab of stone was supposed to dissuade vermin from climbing up the support posts and eating the grain stored within.  I am not sure how effective this technique was, but you see granaries and huts throughout the high Alps with these circular stones on the foundation.

Hiking note:  the Tour of Monte Rosa is one of the grand Alpine treks with spectacular scenery and the opportunity to cross glaciers and many passes. Most people start and end in Zermatt, making a 10-12-day circular route.  Highly recommended!  All photographs taken with a Fuji F31fd digital camera.