A Pocket of Hope in Detroit, the Heidelberg Project

Detroit, Michigan, This once-great industrial city is situated on the Detroit River and was the birthplace of the American automobile industry. It was also the industrial powerhouse that turned out vast amounts of munitions, airplanes, and military vehicles that helped us win World War II. But since the 1960s, it has also become an infamous example of urban decay taken to such an extreme extent, it boggles the mind. This was not a war zone, like Stalingrad in 1942; it was self-imposed decay caused by decades of racial strife, corruption, incompetence, theft, greed, and stupidity. Are there any more terms we can apply? Several former mayors were jailed for corruption. As of 2014, the city is in bankruptcy. But there are pockets of hope. One of these is the Heidelberg Project, a neighborhood of art projects that attracts tourists and shows that something creative can be extracted from the mess. The Project even has a web page. 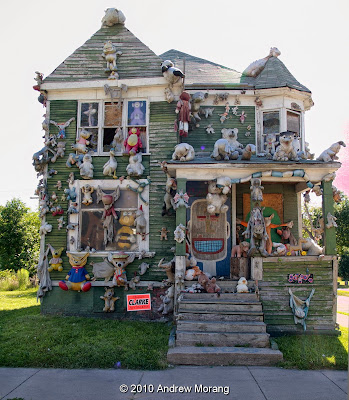 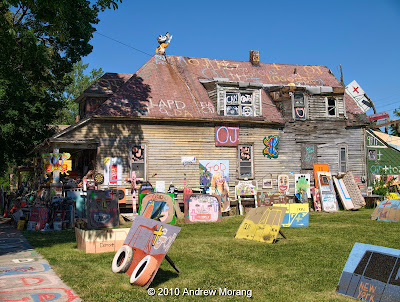 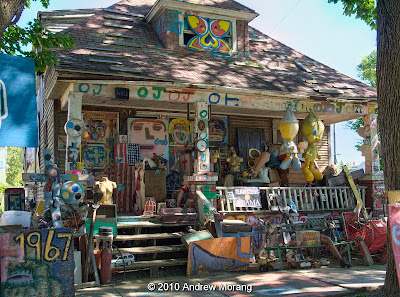 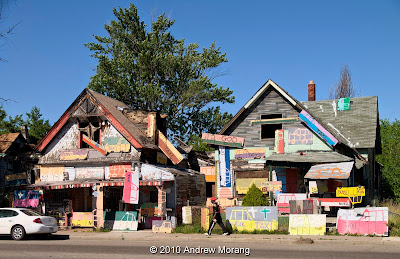 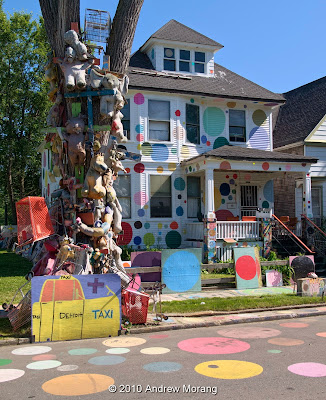 Walk around, and you see houses covered with teddy bears, signs, balls, puffy things, and bits of plumbing. Even the street has dots. Some of the houses are occupied; some are only used during the day for classes or projects. 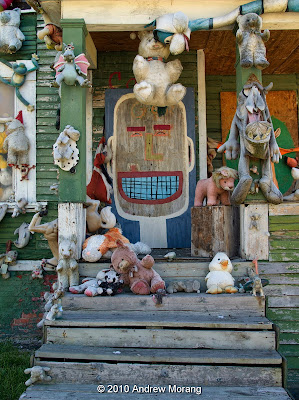 If you want, you can also have little lions, ducks, dragons, and monkeys. 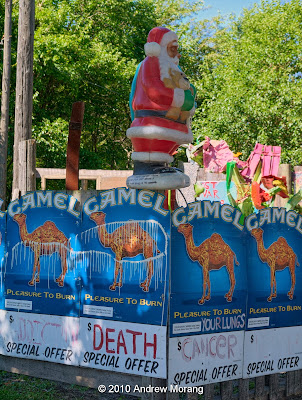 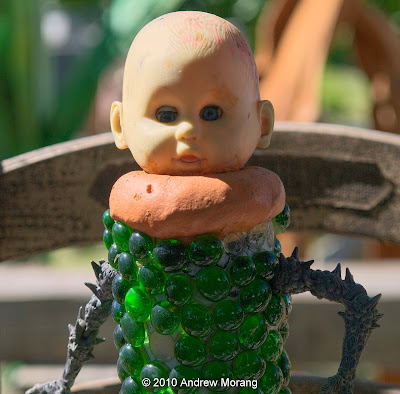 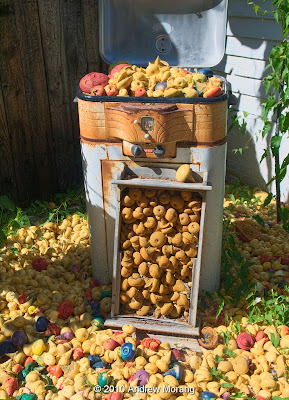 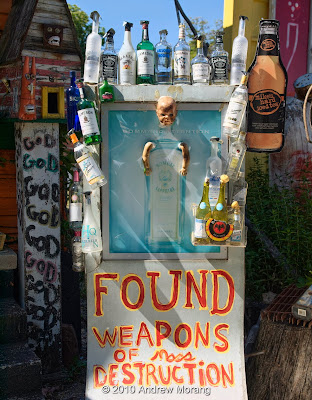 Stop to look at the details. There are plenty of non-subtle comments on the American consumer society, the gun mystique, poisonous foods, and legal drugs. 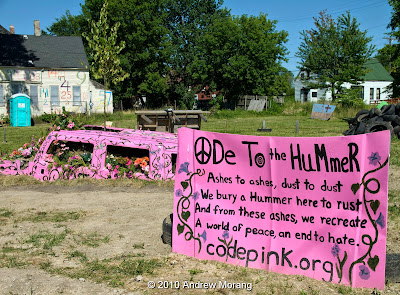 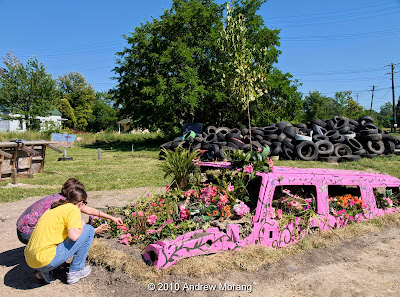 The famous buried Hummer. These people really, really did not like Hummers. Or maybe they liked them because they were such an extreme example of modern American consumer society and its cult of self-gratification via gross material possessions. 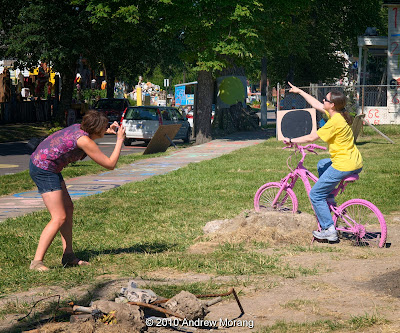 The pink bicycle is just in front of the pink Hummer. 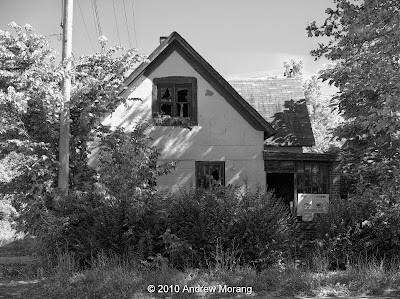 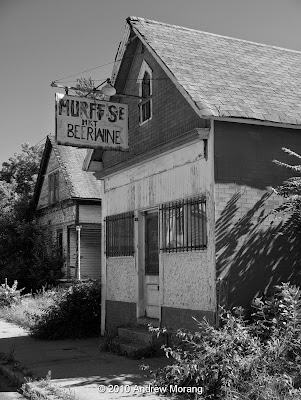 Unfortunately, all you need to do is walk a block or two to either side of Heidelberg, and you see stark evidence of what has befallen much of Detroit: abandoned houses, fields, tatty signs, and closed stores.

Not all is well even here. Arson is cheap entertainment in Detroit, and even the Heidelberg Project was not immune. From their web page:


Just before 3:00AM on March 7th, the colorful Party Animal House (a favorite of children) located on Mt. Elliot (between Heidelberg and Elba Streets) was destroyed by arson, the 9th fire over an 11-month period. Though DFD responded within five minutes of the first call, their focus quickly shifted from the already destroyed Art Installation, to protecting the adjacent home of longtime residents. Though the neighboring structure suffered significant water and fire damage, its residents were unharmed and remain in surprisingly good spirits. This is the ninth fire set at the internationally renowned art environment since May, 2013, when The Obstruction of Justice house was first set ablaze.

Another essay on the arson at the Heidelberg is from David Uberti.

We will look at more Detroit photographs in future articles. Click for photographs of the International Waterfront. Heidelberg photographs were taken in 2010 with an Olympus E-330 digital camera and the Olympus 14-54mm lens. I reprocessed the RAW files with PhotoNinja software.

This is the third post on our tour of historic cemeteries around the world. Galveston's Old City Cemetery is right off Broadway Avenue, on your right soon after you enter the city after leaving the causeway from the mainland (I-45). 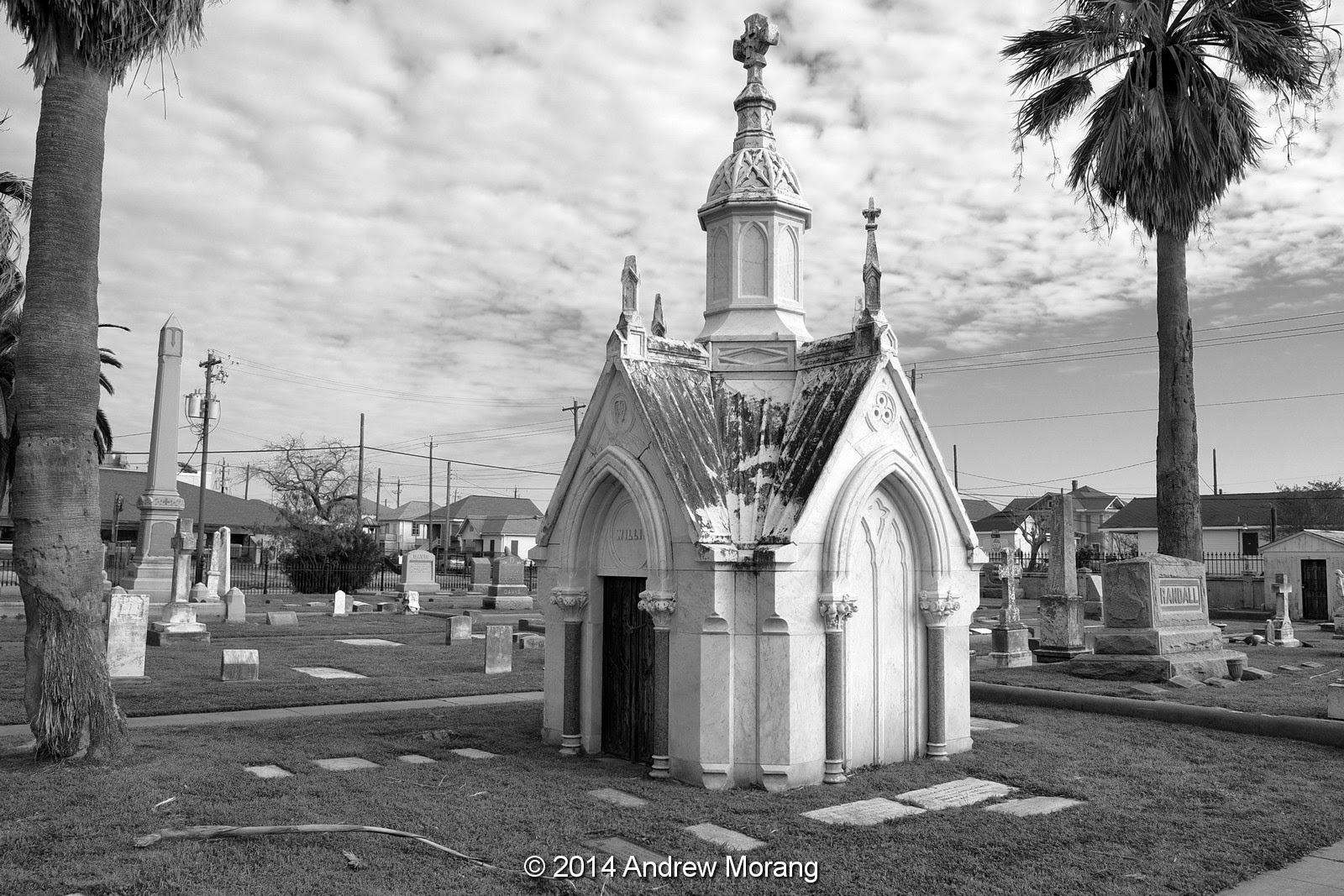 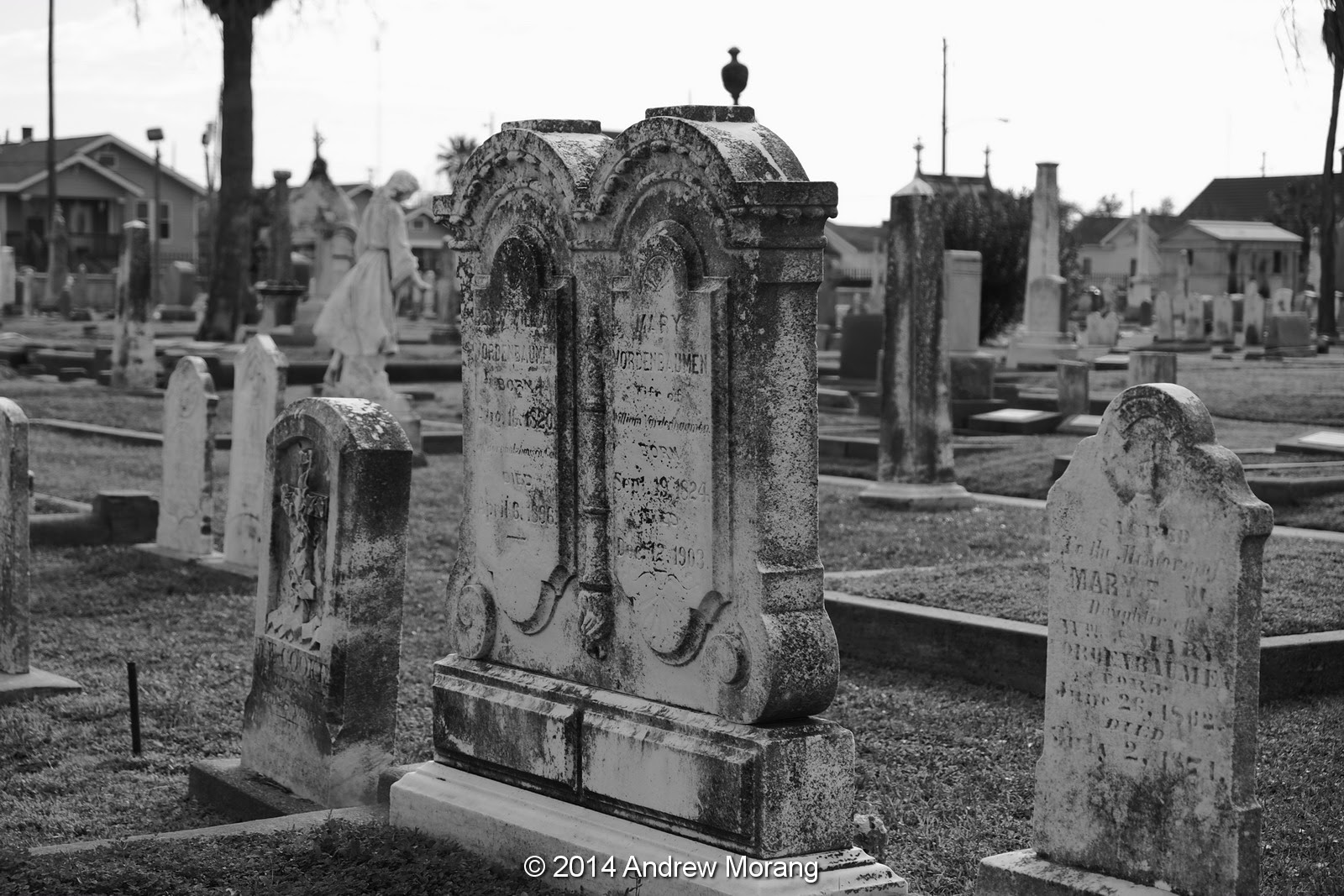 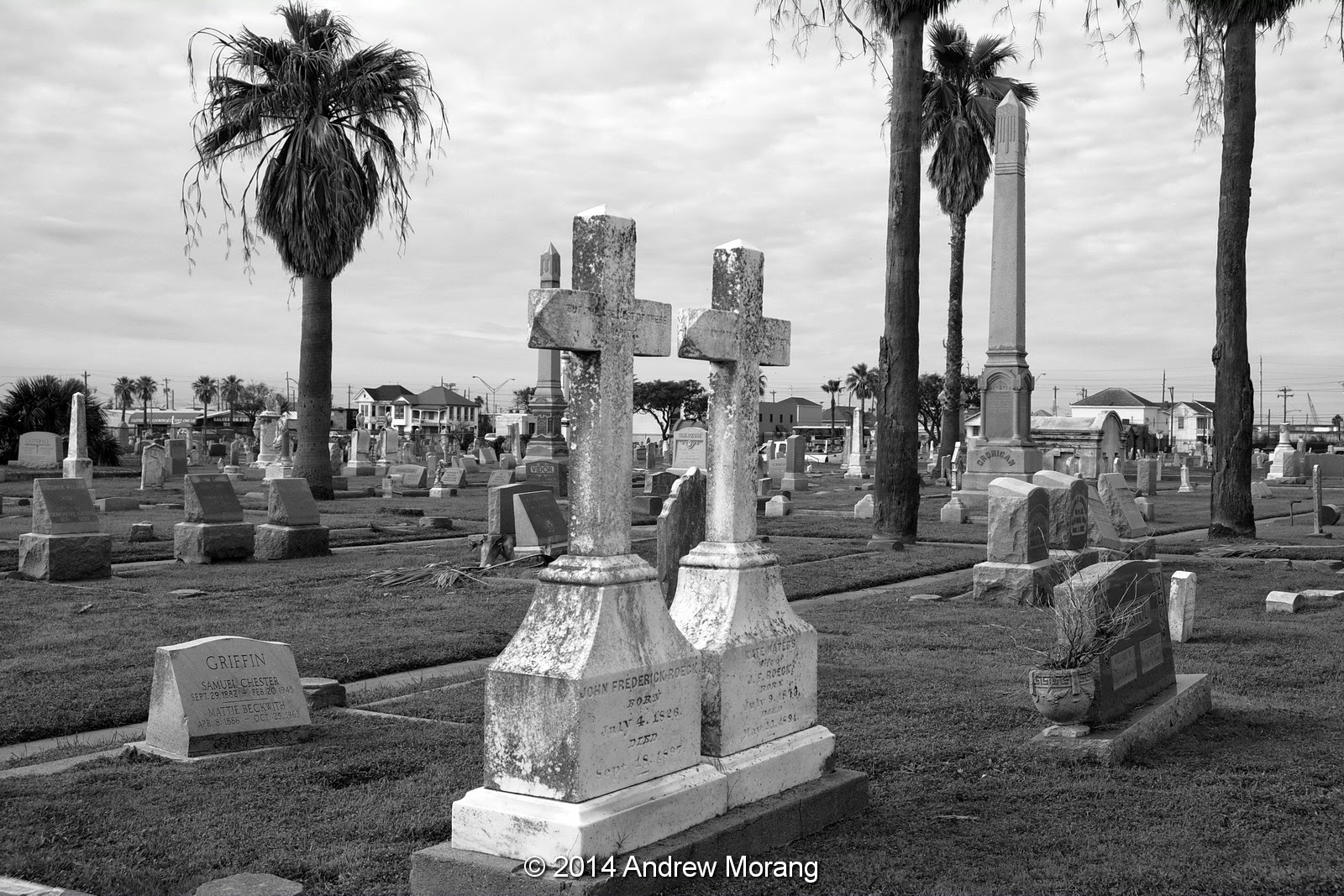 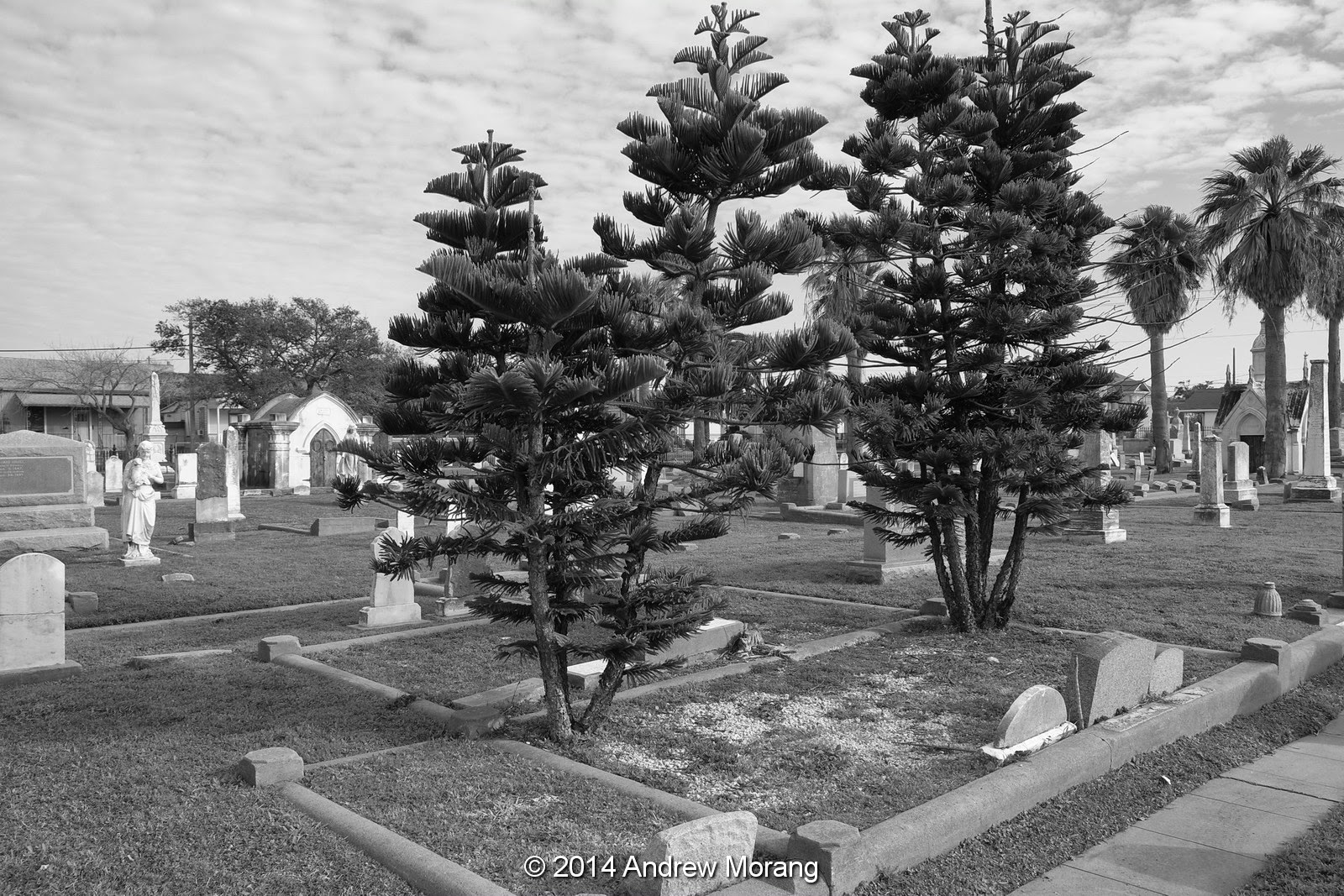 The cemetery is a flat rectangle with a mixture of ornate early 20th century tombs, some mausoleums, and some plain new stones. It is a merger of 7 historical cemeteries dating back over 170 years. A few web pages claim some of the interred are victims of the great 1900 Galveston Hurricane, but most of the dates I saw were later than that. 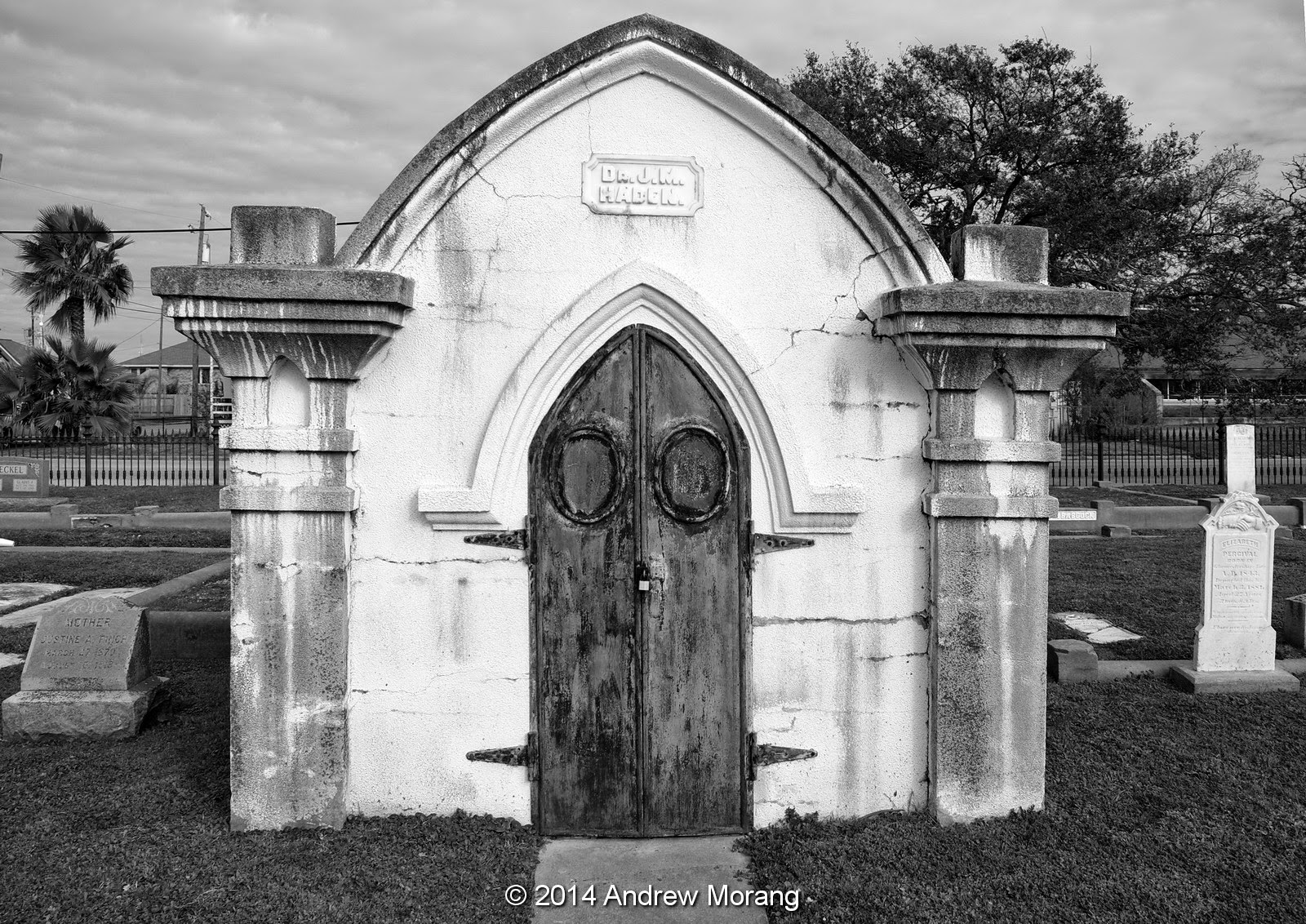 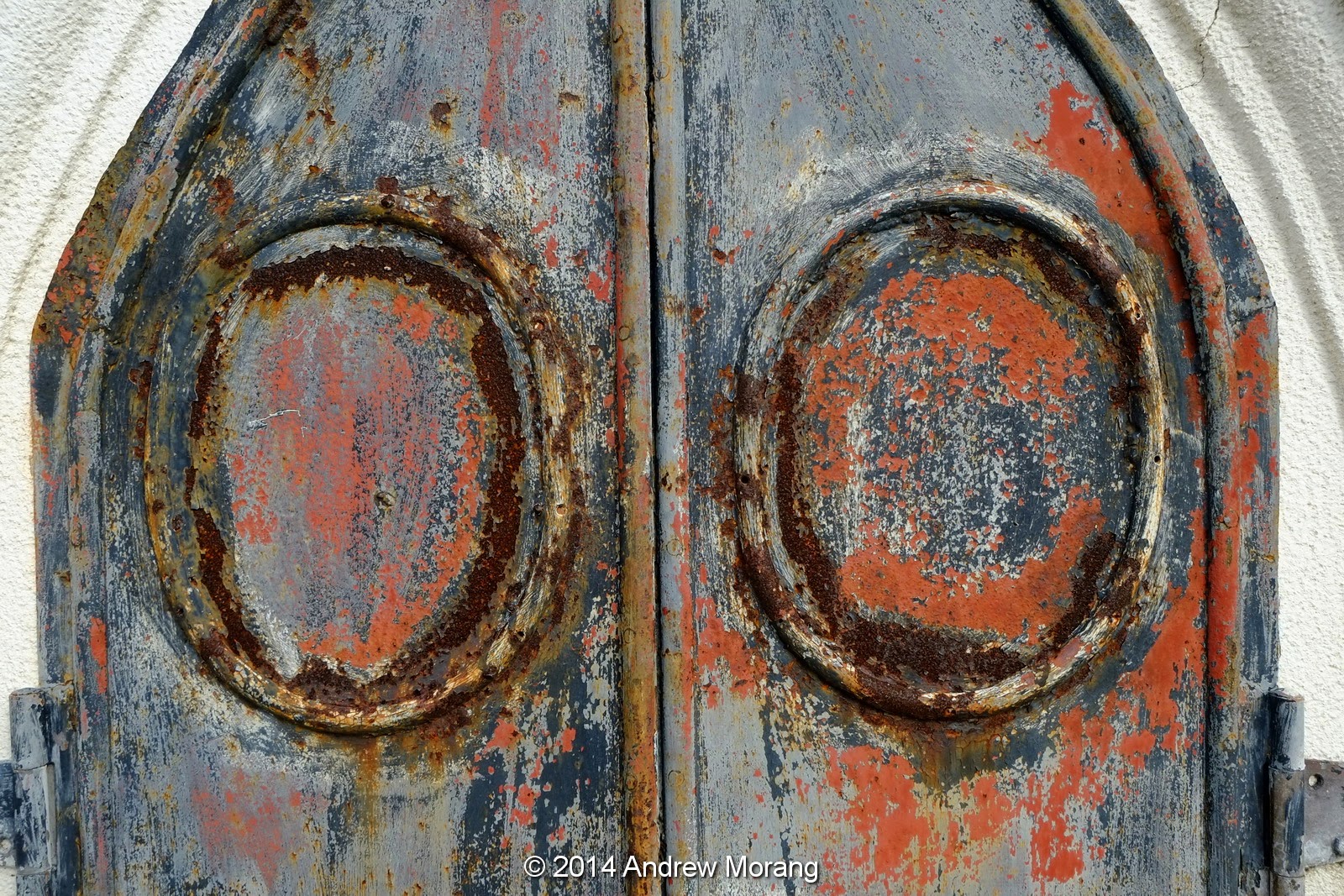 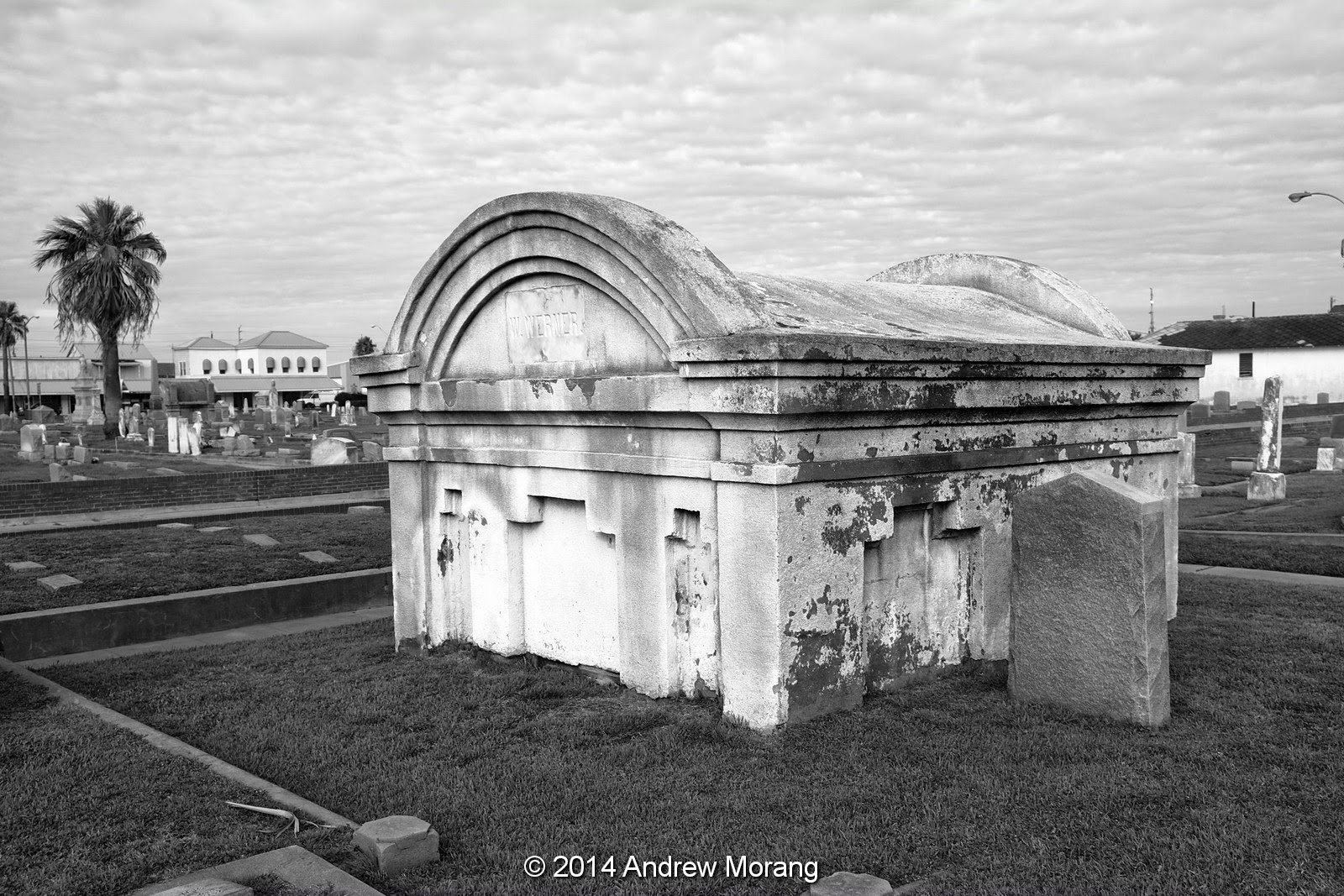 Some of the mausoleums have interesting architectural features; some are relatively unadorned. 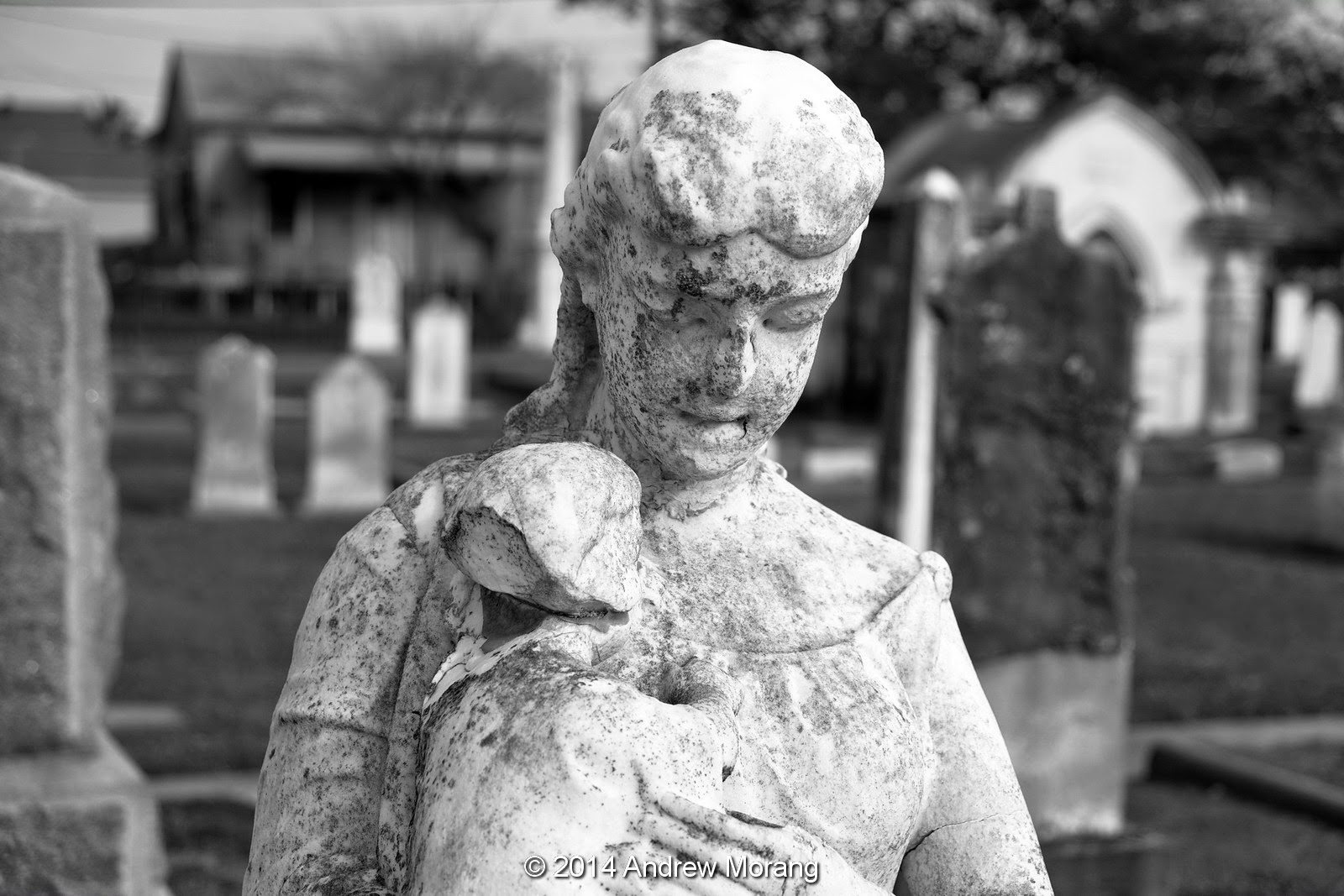 There is some statuary, but not as much as I expected. 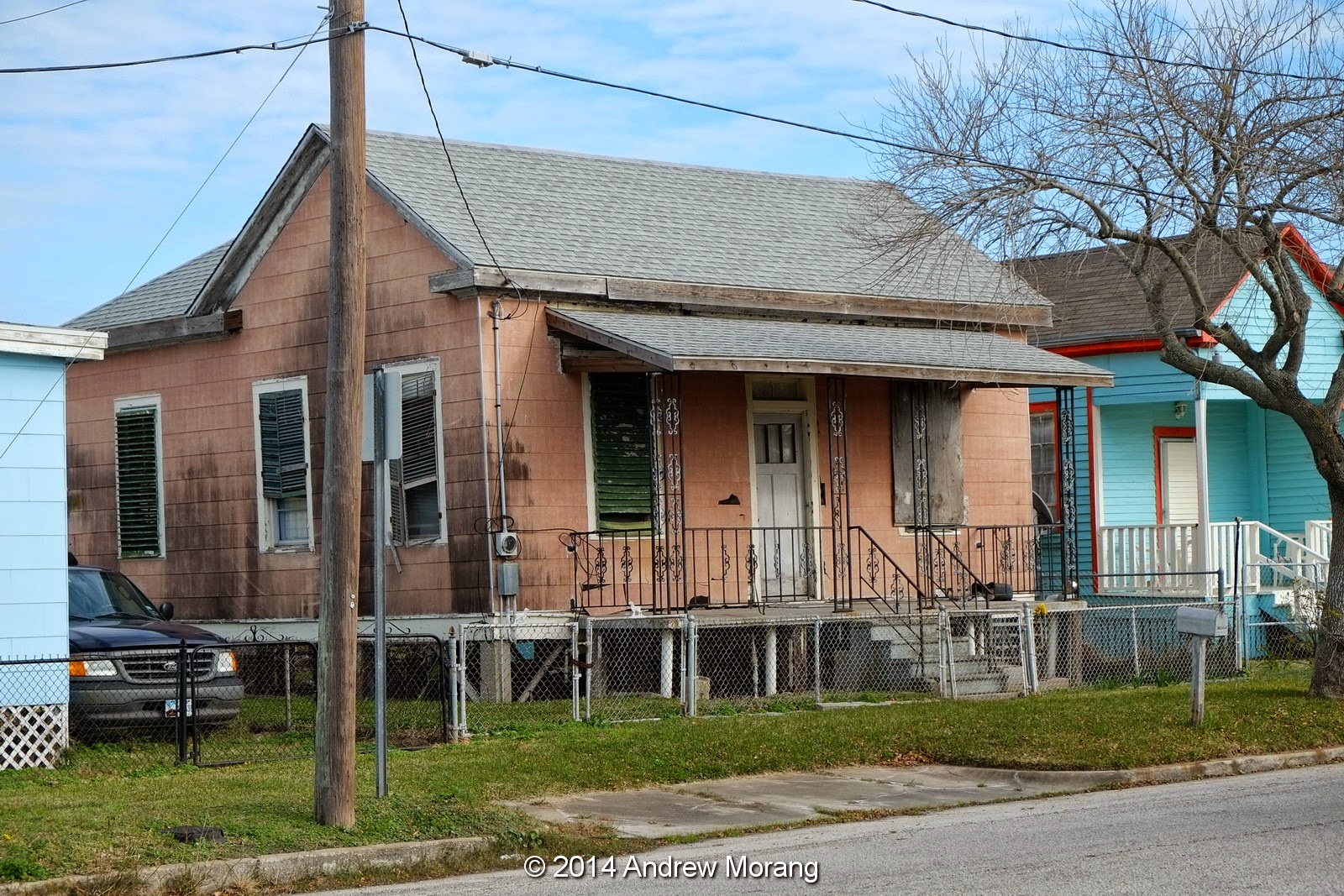 The adjoining streets are some of the oldest in the City, with a mixture of old cottages in varying states of repair.  The neighborhood around the Old City Cemetery looks safe enough, and there are even night-time ghost walks. 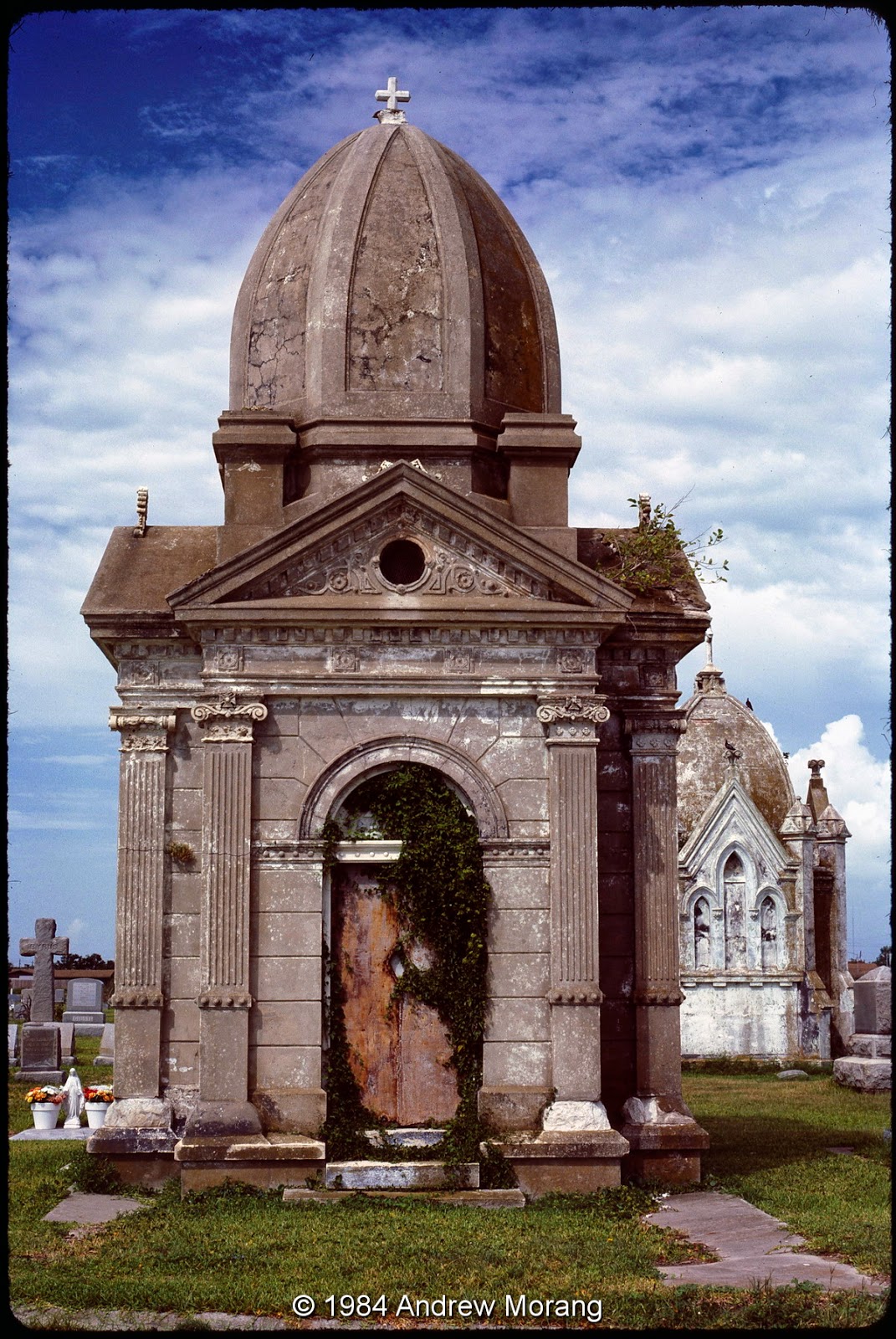 There are at least two other cemeteries in Galveston. The Calvary Cemetery off 61st street has a couple of tall mausoleums with  unusual domes. They are the most substantial structures at Calvary. Since I took this photograph in 1984, the unit in the foreground has been cleaned and is now white. The inscription above the door says, "Oppermann Family Vault 1884." 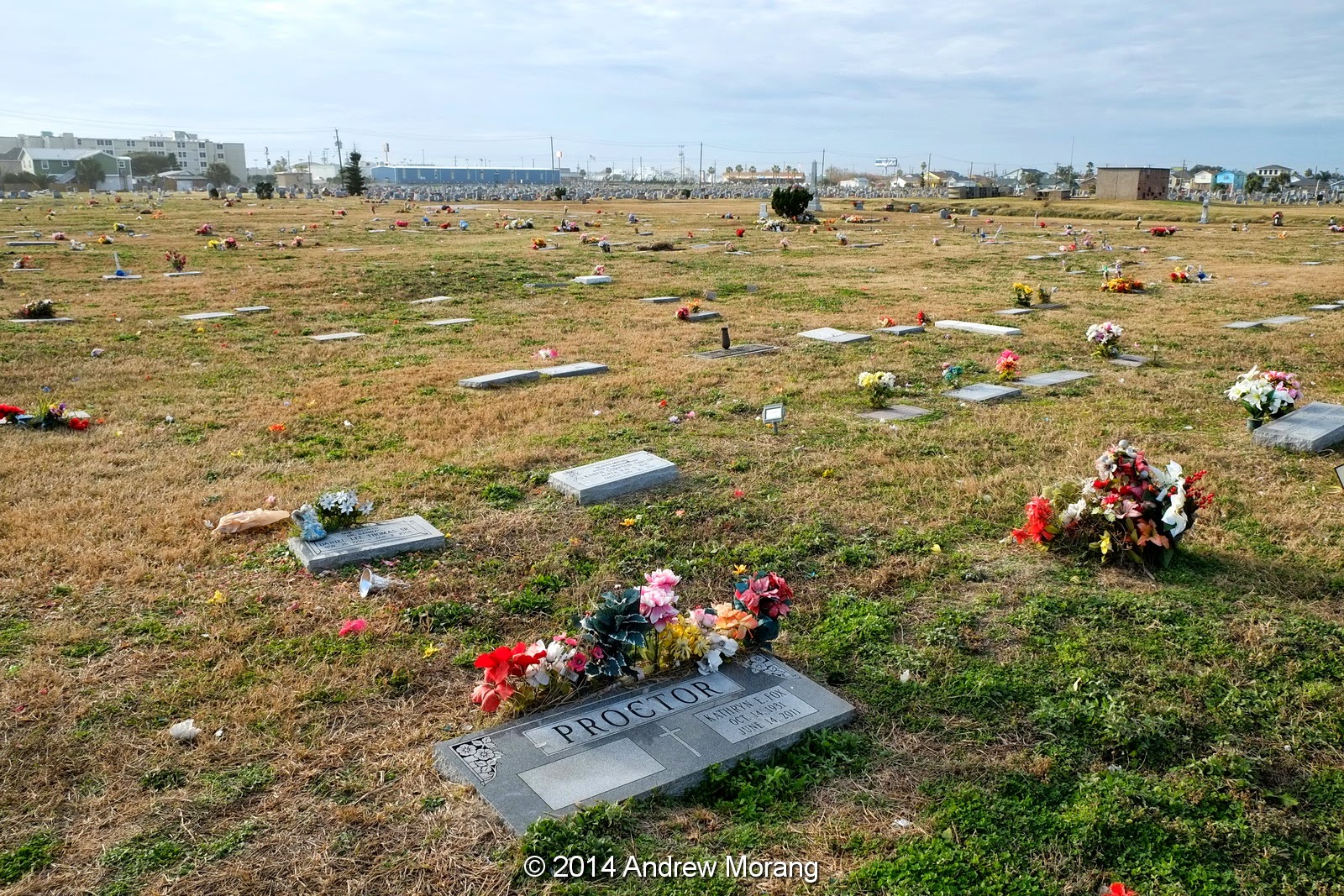 Lakeview Cemetery is not as interesting. Most of the monuments are modern.

Decades ago, Galveston was a bit rough, but it looks much better now.  Significant cleaning and restoring has been done (and is ongoing) after the flooding caused by Hurricane Ike on September 13, 2008. Many of the historic cottages have been repainted and re-landscaped. If you have not been here in years, come for another visit. 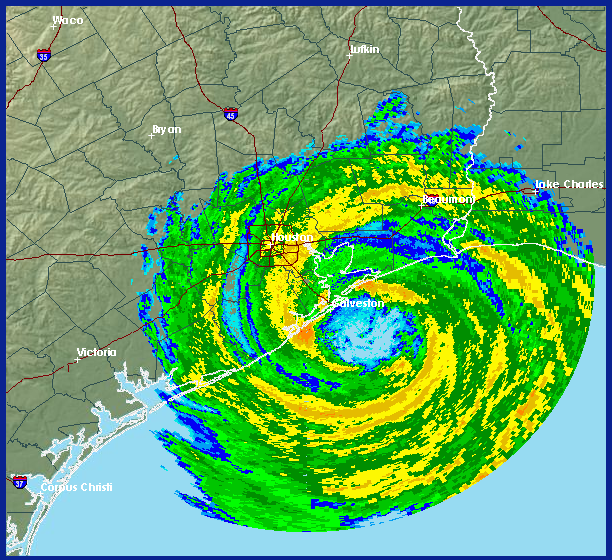 This is a radar image of Hurricane Ike at landfall: HGX Radar, Base Reflectivity, 1:07am CDT (from the National Weather Service, Houston/Galveston, via the Wikimedia Commons). This was just a few miles north of Hurricane Alicia's landfall on August 18, 1983. I lived in Houston at the time, and the eye of Alicia went right over our house.

I took the 2014 photographs with a Fuji X-E1 digital camera and processed the RAW files with PhotoNinja software. The 1984 color photograph is a scan of a 35 mm Kodachrome 25 slide, taken with a Leica M3 camera mounting a 50mm f/2.8 Elmar lens (the post-war version of the Elmar with Lanthanum glass). Thank you to Ms. Carol Wood, Archivist at the Rosenberg Library, for helping me identify the Calvary Cemetery.

For another historic cemetery, click the link for the First Cemetery in Athens, Greece.
Posted by Kodachromeguy at 21:52 No comments: