Rolling Fork is a typical Mississippi Delta agricultural town only about an hour north of Vicksburg. I had not been to downtown Rolling Fork in several years and was surprised to see a new art gallery on Walnut Street.

I stopped and met Mr. Lee Washington, a friendly gent who was doing some welding in his shop. He uses the spindles from cotton harvesting machines as well as other metal bits for his art. Mr. Washington graciously let me take some photographs. 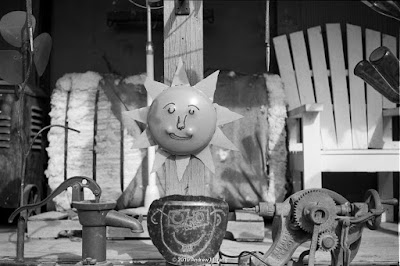 The porch is a wealth of neat stuff, bottle trees, and contraptions. 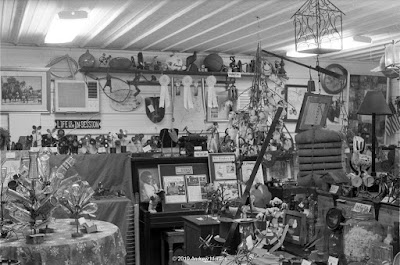 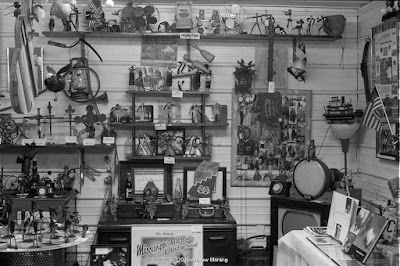 The inside of the gallery is especially interesting. My Vito BL camera has a fixed 50mm lens, so there was no way to capture the entire scene in one frame. These are 1 second exposures with the camera mounted on a tripod. 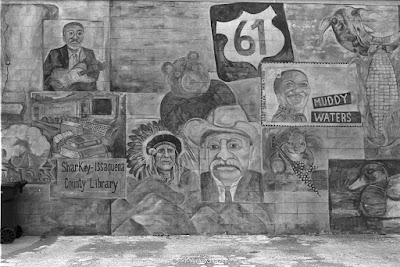 Across the street: a Highway 61 mural on the side of the Sharkey-Issaquena Library. Well done!!

All photographs are from Fuji Acros 100 black and white film, exposed with my 1957-vintage Voigtländer Vito BL camera with a 50mm ƒ/3.5 Color-Skopar lens. This is an impressive unit-focussing 4-element Tessar-type lens. As you can see in frame 3 above, there is only the slightest amount of flare or blooming around the fluorescent lamps. The lens is coated with a blue-purple coating. If you are interested in details, I wrote about this camera on the 35MMC blog.
Posted by Kodachromeguy at 08:00 1 comment:

The Flood of 2019 (Part 3), the Yazoo Backwater near Onward and Yazoo City, Mississippi

We will continue our review of the flooding in the southern part of the Mississippi Delta, the area known as the Yazoo Backwater. The last article was about the area near the town of Redwood. Here we continue north a few miles to Onward and briefly jump east to Yazoo City.

Onward is an unincorporated farming community near US 61 south of Rolling Fork. Onward is known for two historical notes:
This is the front of the Onward Store as of 1996. The store faces US 61 (the Blues Highway) and is just south of the intersection with Rte 1. Residents of Eagle Lake need to drive on Rte 1, then turn south on 465 and access the mainline levee. The levee road eventually gets them to Eagle Lake.
Some of the fields north of Rte 1 were semi-dry, but heading west and closer to the mainline levees, the road dipped down, and the surrounding fields were inundated.
Rte 465 takes off south from Rte 1. The day I drove on it, a short section was underwater, but people were driving through, so I did the same carefully. The road runs through forest, much of which was flooded. What struck me was the number of snakes. I saw numerous ones that were squashed and hit at least one when it slithered across the road just in time for my tires. It appears that they cross from the woods on one side of the highway to the other. Most looked like black water moccasins, but one nicely patterned fellow sitting quietly in the middle of the pavement looked like a rattlesnake. (I decided to not get out and check in person.)
Back in Onward, the fields just east of 61 were dry. I saw this unused mid-century house slowly being engulfed with vines.
Egremont is a small community south of Rolling Fork. I have more Egremont photographs to share in the future.
To the east, Yazoo City (the "Gateway to the Delta") sits on the edge of the loess bluffs. But to the west lies the flat Mississippi Delta and the Yazoo River. The fields along Hwy 16 were inundated as of mid-March when I took these pictures with my Hasselblad camera.

This concludes a short look at the flooding in the Yazoo Backwater. As of mid-June, much of this area is still under water. Depending on water conditions, I may do some more exploring and photographing.

The Flood of 2019 (Part 2), the Yazoo Backwater near Redwood, Mississippi

This is Part 2 of our article about the 2019 flood in west central Mississippi. In the previous article, we covered the inundation in the area around Vicksburg, which is directly affected by the level of the Mississippi and Yazoo Rivers. Here we will look at the flooding that occurred north of the Steele Bayou flood gates.
The Yazoo Backwater is the area of the Mississippi Delta that is north of the Steele Bayou floodgate. As I wrote in the previous article, if heavy rail has fallen in west central Mississippi, the water heads south through creeks and bayous, eventually into the Yazoo River and then to the Mississippi River. But levees line the Yazoo River, and if the Mississippi River elevation is high, the US Army Corps of Engineers closes the Steele Bayou gates and the local drainage has no way to escape into the Yazoo River. The result is varying degree of inundation in the area shown in gray on the map.
Eagle lake is an oxbow lake in the southern part of the Yazoo Backwater. It is the blue crescent at the lower left in the gray area. The residents were told to evacuate in January. But many decided to stay in their homes and tried to hold back water with sandbags. One of my friends lives there and said convicts were brought in to help with sandbagging. She cooked meals for all the workers.
In March, this elevated mobile home was visible from a dirt road, but now the foliage is too thick.
Floweree Road is a U-shaped road that takes off from US 61 just north of the turnoff for MS 465. It was an interesting road to bicycle in January because of the water all around. We saw a dead boar being eaten by vultures. Presently (June 6, 2019) Floweree Road is completely inundated and impassible by cars. All the scenes above are at least 1-2 ft deeper in the water now. The railroad once ran near Floweree Road, and many farmers parked farm equipment up on the embankment.
This has been a quick look at the scene off US 61 (the Blues Highway) near Redwood, Mississippi. I will continue this 2019 flood topic the next article.
Posted by Kodachromeguy at 08:00 No comments:

The Mississippi River and Yazoo Backwater flood of 2019 will go down in the record books as one of the longest-lasting inundations in this part of the world. The Mississippi River rose above flood stage of 43 ft on the Vicksburg gauge in early January and stayed high June In the meantime, the central part of the state received record rainfall in January and February, filling creeks and streams in the Yazoo Backwater.

Let me digress with a short explanation of the hydrology of the region and why you see so much water. Levees (or dikes) line the Mississippi River all the way from central Missouri to the mouth of the river in the Gulf of Mexico, well south of New Orleans. The purpose of the levees is to prevent the river from flooding farmland and towns in the midwest during high river stages. The Yazoo River is a tributary of the Mississippi, meaning it flows into the larger river. The Yazoo drains west central Mississippi, much of it comprising the broad flat alluvial plain known as the Mississippi Delta (the same Delta famed for Blues music).

But during high water, several complicated issues arise:
I will divide this topic into three articles. This first will show photographs from Vicksburg and the area south of the Steele Bayou flood gate, meaning the area directly influenced by the water elevation on the Mississippi River. The next two articles will cover the terrain north of the Steele Bayou flood gate, the southern part of the Mississippi Delta (note, this is not the delta in the Gulf of Mexico - the terminology is confusing).

For some more information about how all this water reaches the Gulf of Mexico, see my 2011 article about the Old River Control.

These are the flooded woods next to the Yazoo Canal along North Washington Street. Unfortunately, many little forest animals like possums and raccoons come out of the woods and get hit by cars.
The shipbuilding and repair company needed to set up a floating walkway for their employees.
The Ford subdivision, located just north of the Vicksburg Forest Products complex, floods almost every year recently. I asked an older gent why the houses were allowed to be built in this vulnerable area. He said in the past, other than during the historic 1973 flood, the land did not flood. If this is true, what had changed?
The cottages off Young Alley appeared to be dry this year. Further north, the Vicksburg Southern Railroad tracks serve as a levee, keeping the water partly away from North Washington Street.
The raised mobile home os on its own berm, therefore being safe from flooding. I saw a fellow leave the house and walk through the water using a garbage sack as a form of waders.
Kings Crossing Road leads west to some fields and woods. Many years ago, a fellow had a number of railroad postal cars parked in a field, but an old gent in a pickup truck said the rail cars were dragged away for scrap. The gent in the truck said the aluminum boat was his and he used it to get to his house.
In the photograph above, the flooded fields are beyond the railroad embankment and tracks.

The color photographs are from expired Kodak Ektar 25 film, exposed with a tripod-mounted Hasselblad 501CM camera with 50mm, 80mm, and 250mm Zeiss lenses. The colors are not quite right, but by using the gray dropper tool, the SilverFast scanner software recovered most colors.

A beautiful Victorian house at 2432 Cherry Street suffered a catastrophic fire in mid-2018. Fortunately, no one was injured, but the house was grievously damaged. The house formerly belonged to my friends, Leslie and Daniel, but they had sold it a few years ago. Nevertheless, they were devastated by the news of the fire. 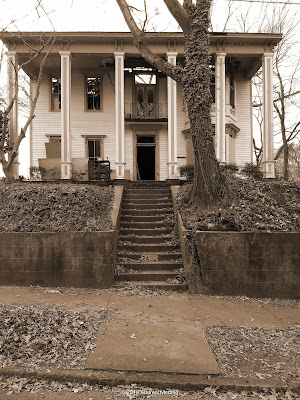 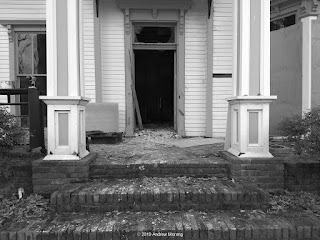 While biking by the house in February 2019, I saw a tractor and some men looking at the property. That meant trouble, imminent demolition. I talked to one of them, and he said it would be hopeless to rebuild the house. Too much had been burnt including most of the roof. 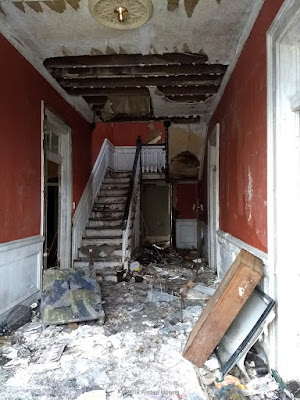 This image shows the elegant central hallway. The walls were plaster. 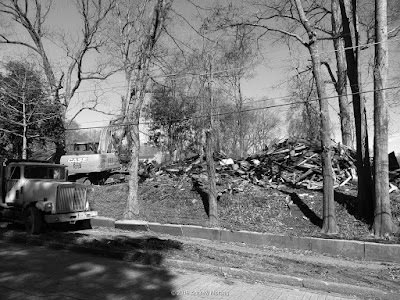 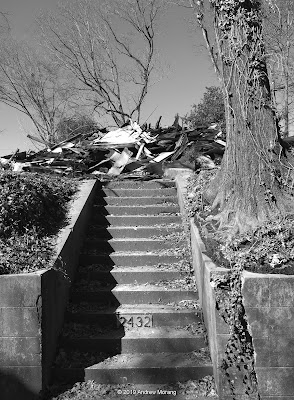 Once the demolition team began work, it was all over within 3 or 4 days. I saw them salvage some materials like iron railings and some timbers. But most of the house was reduced to a pile of crushed timber. 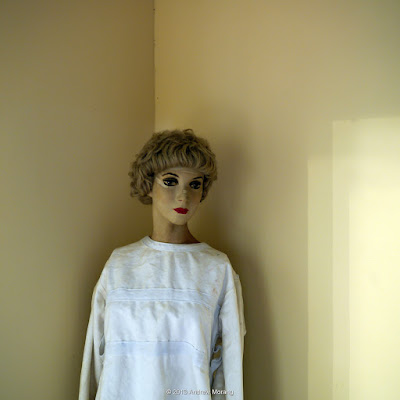 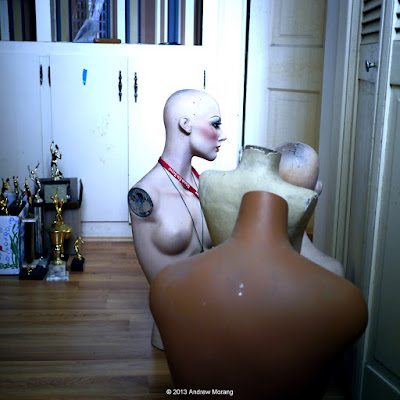 Some unusual ladies lived here in the past. Hmmm, I should have bought one. Regardless, slowly but surely, Vicksburg is losing its architectural heritage.

Update May 2020: I learned from a friend who lives near the lot that the owner of the house had refused to raze the wreck. The city deemed it a hazard and hired a contractor to tear it down. Now the City has a lien on the property. Vicksburg suffers from this problem on a regular basis. Jackson must be in even worse condition as per abandoned properties with liens.
Posted by Kodachromeguy at 08:00 2 comments: