Dear readers, in my last article, I took photographs in the basement of the former Coca-Cola bottling plant on Washington Street in Vicksburg. The basement had some interesting heavy-duty machinery, patterns, shapes, pipes, and dust. How about the attic? The Open Market occupies the main floor of the old bottling factory and sells antiques and furnishings. I asked Lisa if I could photograph upstairs, and she graciously said I was free to go ahead.

I first went up to the attic with Mr. Cripps, the carpenter who rents the basement (see the previous article). Oh oh, trouble. A rooftop access trapdoor was open. A big egg was on the floor with some twigs and debris. A grumpy black vulture was on the roof beyond the trapdoor. We left the trapdoor and grumpy vulture alone. Later, some guys moved the egg and some straw out to the flat rood and closed the trapdoor. I hope a chick hatched successfully.

The attic is reasonably intact, and the the roof appears to be sound. This was a well-built structure. The attic floor is concrete, so no danger of falling through rotted flooring.

This machine with a complicated keyboard almost surely printed the checks that you see in the first photograph. It may have also tabulated the amounts on some other media, maybe paper tape? Burroughs was an old-line American industrial concern that started in the 1880s with adding machines and branched into more sophisticated payroll systems. They moved into digital computers and developed main-frame systems in the 1960s, with emphasis on the banking sector.

The attic did not have too much material so I descended one floor to what was once the office space of the bottling plant. 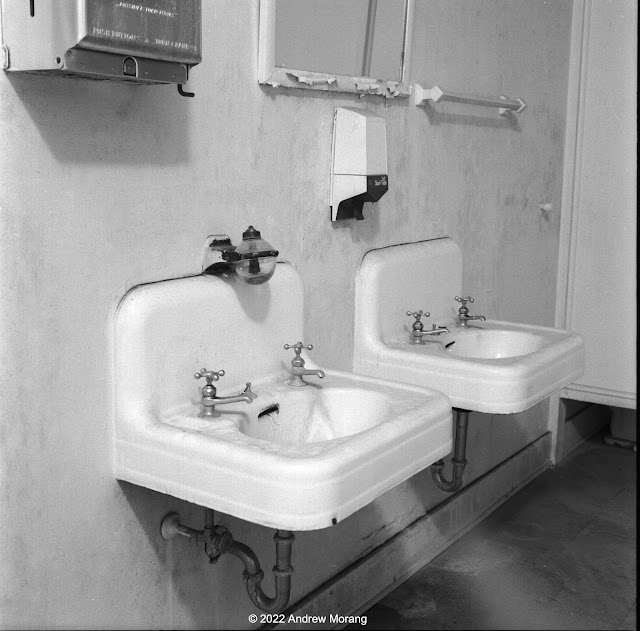 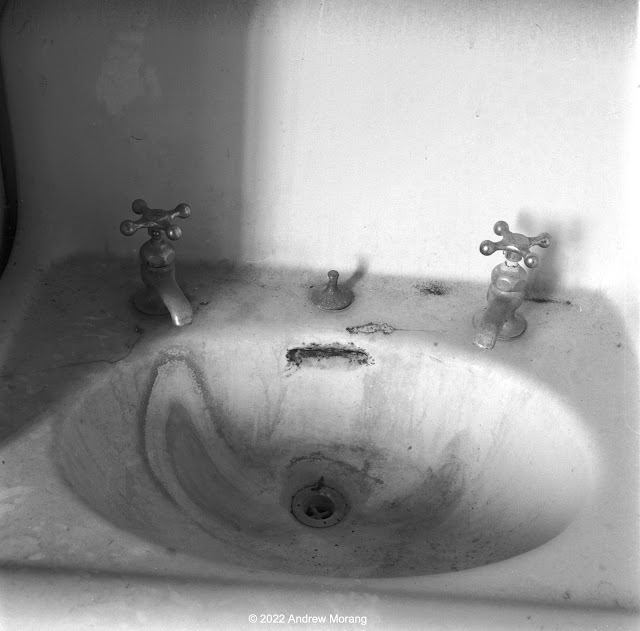 The lavatory had some nice old porcelain steel sinks with dual water valves and high backsplash. Notice the slightly raised lip to reduce splashing over the sides. Compare with the typical modern bathroom sink, which is guaranteed to allow splash all over the vanity/floor and a soap film mess on the sheetrock behind. The worst examples of style over function are the goofy glass bowls sitting up on a platform or vanity. Really dumb.

At some time, likely the 1970s, the company built a kitchen on the second floor. The cabinets were generic, but the sink and range were matching avocado. Nice! The GE range had easy to use push button controls. The first button on the right is off, and the buttons to the left are for progressively higher temperatures. You can use them by touch and do not need reading glasses to see a programmable screen or LED display. Sometimes technology does not make machines easier to use. My former home in Massachusetts had a GE range with such buttons. Simple and reliable.
These bottle caps contained numbers, possibly for some sort or promotion or prize. Twist enough caps from enough drinks and you get a prize (besides stomach rot). 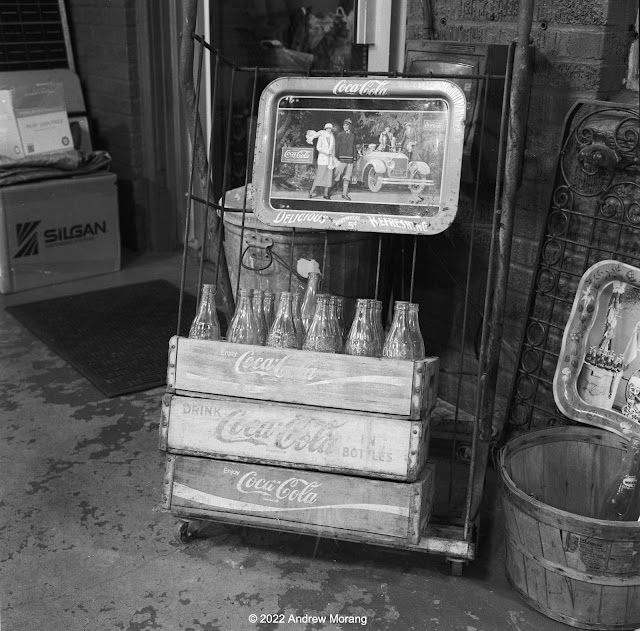 Finally, on the ground floor, a display of classic Coca-Cola bottles. I remember when these bottles contained 6.5 oz. And once upon a time, Coca-Cola was a treat that you drank possibly on Saturday afternoon or evening. A 6-pack lasted in the refrigerator all week. No one civilized drank soft drinks for breakfast or swilled it all day long in slurpy cups. How times have changed....

Posted by Kodachromeguy at 07:30 2 comments:

Dear Readers, you likely know that I like old industrial sites with machinery, pipes, tubes, tanks, and other remnants of industry. The basement of the former Coca Cola bottling plant at 2133 Washington Street in Vicksburg, Mississippi, fits this criteria. This was the last bottling plant that the Biedenharn family built in Vicksburg. This sturdy 1938 brick industrial building stands at the corner of Washington Street and Bowman Street.

Note, this is not the Biedenharn Coca-Cola Museum in downtown Vicksburg, where Coca-Cola was first bottled in 1894 (back when it still had coca in the secret ingredients). The family also operated another plant on Grove Street, later the site of the Vicksburg Steam Laundry. I have negatives of this building to scan one day (you know that fairy tale - one day....).

Here are some photographs of the basement from February of 2022. Mr. Anthony Cripps, a carpenter and cabinet maker, was renting the basement and generously let me photograph the old fittings and machines. He had run new fluorescent lights to illuminate the gloomy space. Most of the frames below had side-lighting from the dusty windows. Enjoy the shapes, patterns, and forms - industrial art.

The stairway was challenging. It was lit with a dim lightbulb above on the ceiling. My incident light meter measured 10 seconds at ƒ/8 on the center of the stairs. I used a 40 sec exposure to accommodate reciprocity of the film. I also added fill flash on the right, but it likely added very little light.

I took these photographs with my Hasselblad 501CM camera, most with the 80mm ƒ/2.8 Planar-CB lens, on Kodak Tri-X 400 film. I stabilized the camera on a tripod because of the long exposures. Northeast Photographic in Bath, Maine, developed the film. I scanned it with a Minolta Scan Multi medium format film scanner.

Standby for the attic in the next article.

Posted by Kodachromeguy at 07:30 2 comments:

My Indiana friend, Jim Grey, writes Down the Road, an interesting blog on photography and philosophical topics. He explores the byroads and historical neighborhoods of Indiana. When he saw my September article on the Lustron houses in Jackson and Albany, he said he knew of some examples in Indiana and generously took some photographs for me. The houses below are from the Broad Ripple neighborhood of Indianapolis.

Jim took these photographs on Kodak TMax 100 film using a trusty Pentax Spotmatic II camera and the 50mm ƒ/1.4 Super-Multi-Coated Takumar lens (one of the legendary lenses from the 1970s).

Oops, this roof looks like a major tree limb crashed down on it. Do any replacement steel roof tiles exist?

Thanks for the photographs Jim! Jim wrote his own article on the Broad Ripple Lustron homes in his blog, Down the Road.
And as a final treat, an advertising photograph from the heyday of the Lustron era. 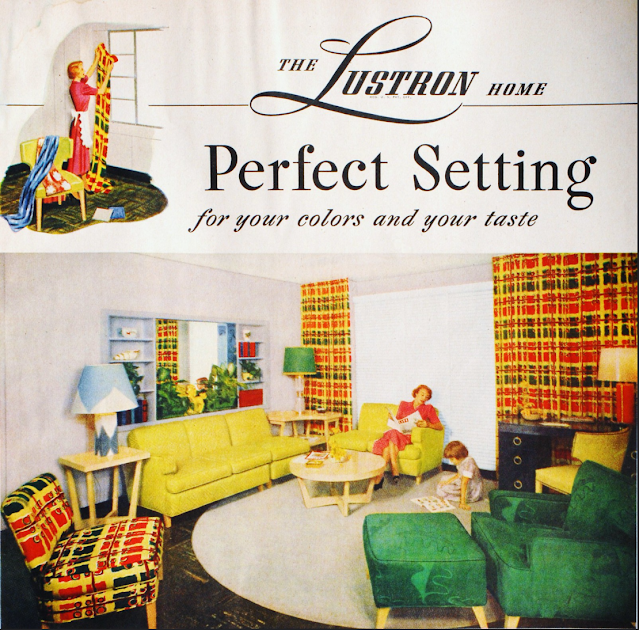 Wow, the curtains match the easy chair!! Love the jade green chair. I recall my mom had a dress that looked like that in the late-1950s.
Posted by Kodachromeguy at 07:00 5 comments: