From the archives: New York City in 1942

I recently looked through some family boxes of photographs and found a steel Kodak film can with tightly rolled film. It was a short roll of nitrate film, possibly untouched since it was developed in 1942. It recorded one of my dad's trips to Washington and New York City. 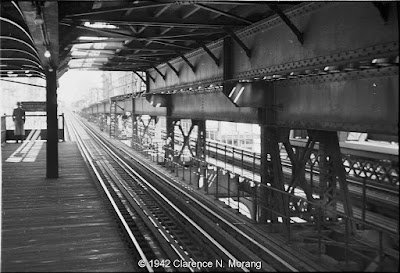 This is one of the Elevated (El) Lines, somewhere in Lower Manhattan. 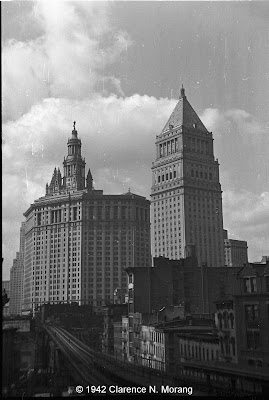 The monumental building with a statue on top is the Municipal Building at 1 Centre Street. Built between 1907 and 1914, it houses City of New York offices. It may have been the inspiration for the Stalin-era Seven Sisters office buildings in Moscow. Warsaw also has one of these somber buildings, "donated" by Marshal Stalin to the supposedly-grateful people of occupied Poland. The tall building on the right is the Thurgood Marshall United States Courthouse at 40 Centre Street. It was originally known as the Foley Square Courthouse but was renamed in 2001 to honor Mr. Marshall. 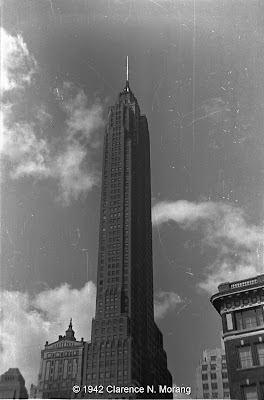 The elegant Art Deco Cities Service Building, now known as 70 Pine Street, is 67 stories or 952 feet tall. It was built in 1931-32 by the Cities Service Company (oil and gas). 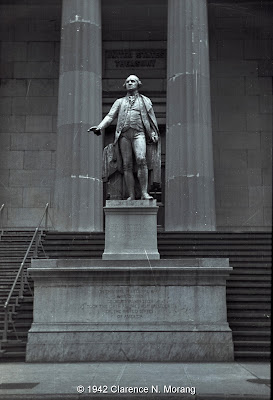 George Washington presides over the monumental stairs at the US Treasury building. This is now the Federal Hall National Memorial at 26 Wall Street. General Washington took his first Oath of Office here, and the building at one time housed the Congress, Supreme Court, and executive offices of the United States government. 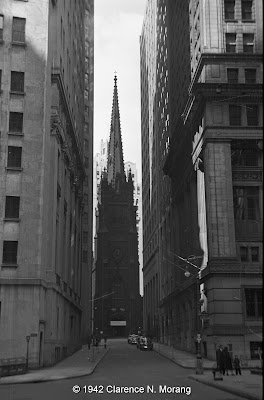 Trinity Church is at 75 Broadway and can be seen at the end of Wall Street. This is the third Trinity Church on the site. Construction began in 1839 and it was completed in 1846. 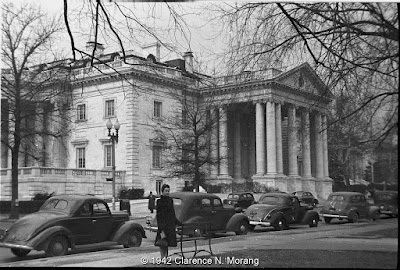 Slightly off the topic: this is Memorial Continental Hall, owned & operated by the Daughters of the American Revolution, in Washington, DC.

To the best of my knowledge, this roll of film dates to early 1942, but my dad's notes are incomplete. The camera was an American-made Perfex, from the Candid Camera Corporation of Chicago. It may have been equipped with a Wollensak lens. I scanned the Nitrate film frames with a Plustek 7600i 35mm film scanner using SilverFast Ai software. The negatives have scratches, but unfortunately the infrared iSRD function does not work with real black and white film. Consider that despite the flaws, there is still data on this film that can be extracted 64 years later. Will our digital files last that long? (Answer, dream away.) 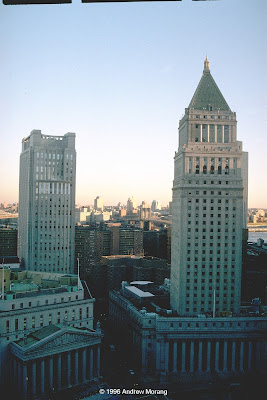 This is a 1996 Kodachrome photograph of the Thurgood Marshall Courthouse. I think I was on the roof of an office building occupied by the State of New York's Department of State at 270 Broadway. This file came from a Kodak Photo CD, which was an early attempt to provide a convenient way to show photographs on a television set. A film laboratory developed the film and then scanned the frames onto a CD. The user could insert the CD into a small player, somewhat like a VCR player. The scans technically should have been excellent, but my experience was mixed. Some contractors did distinctly mediocre work. Now, it is difficult to find a software package to open the proprietary Kodak format.
Posted by Kodachromeguy at 18:20 3 comments:

The Mississippi Delta 17: Country stores in Louise and Holly Bluff

After a long break, let us return to the Mississippi Delta, which is full of interesting little towns and remnants of an older era. Routes 149 and 16 take you through the southern Delta, past small towns, catfish ponds, and the Delta National Forest, ending in Rolling Fork (which will be the subject of a future article). 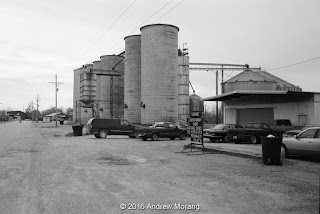 The town of Louise is pretty quiet but looks reasonably prosperous. There is a silo and an auto body shop on the main road. 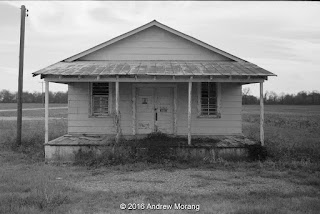 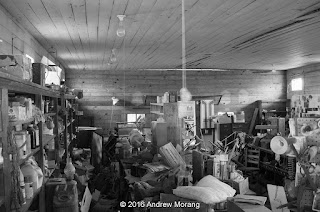 South of Louise on Rte. 16, at the corner of Nixon Road, is a an old store. It was locked up, but the material (stuff) inside looked reasonably fresh, so maybe someone is using it as a storage building. 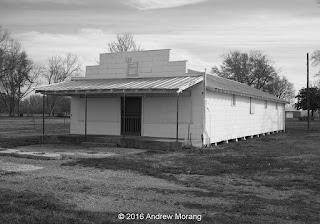 Further south, another farm store at Bayland Road was closed. Notice the square front or facade. 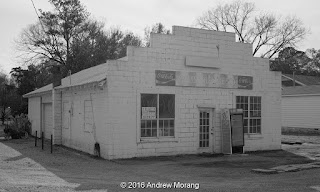 Hwy 16 makes a right angle bend to the west as it enters Holly Bluff, with Sally's Ole Lake Gro at the bend. The Royal Crown Cola cooler was empty, so I suspect Sally has moved on. 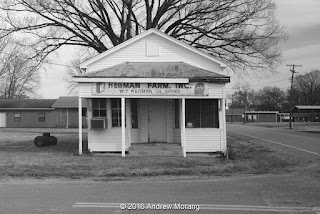 Railroad Ave. crosses Rte 16, with this Hegman Farm, Inc., store at the corner. 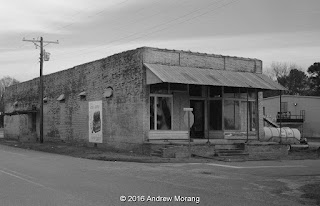 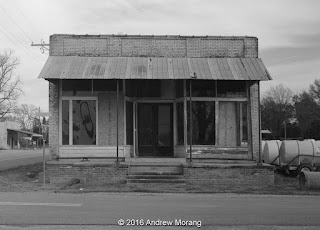 Across the street was a traditional square brick store, unused now.

We will continue our tour of the Delta in future posts. Some of the photographs above were taken with Kodak BW400CN film in a Leica rangefinder camera  and 35mm f/2.0 Summicron lens (click the photos to enlarge and check if there is grain). The others were from a Fuji X-E1 digital camera with RAW files converted to monochrome using PhotoNinja software.
Posted by Kodachromeguy at 23:02 2 comments: