Greece has attracted tourists for centuries. In the 1800s, well-to-do young Brits visited Greece as part of their almost-obligatory continental tour. Some Philhellenes, like Lord Byron, lost their lives in the revolution when Greece freed itself from Ottoman domination. (From Wikipedia: Philhellenism ("the love of Greek culture") was an intellectual fashion prominent at the turn of the 19th century, that led Europeans like Lord Byron or Charles Nicolas Fabvier to advocate for Greek independence from the Ottoman Empire.) By the late 1800s, foreign archaeologists were combing the countryside, excavating ancient sites.

The early 20th century was rough on tourism. Greece suffered dictatorship, the Balkan Wars, World War I, World War II, and the brutal civil war, during which almost 20 percent of the population perished. Finally, with the advent of the Truman Doctrine and the defeat of the communist forces, Greece slowly pulled itself out of poverty and began to rebuild. Adventurous tourists came in the 1950s, and Greek builders began to erect big box hotels to attract the mass-market crowd in the 1960s. 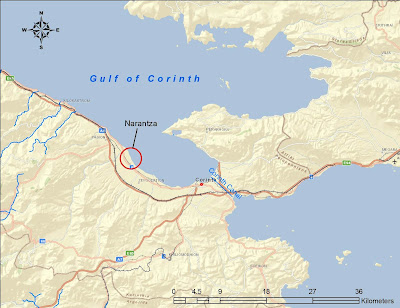 This example is a hotel in the town of Nerantza (Νεράντζα), a farming and vacation village about 15 km west of Corinth on the south shore of the Gulf of Corinth. 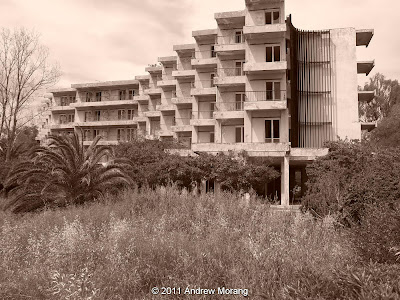 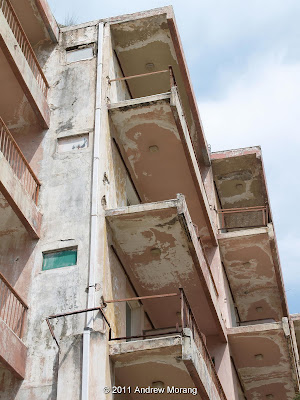 I suppose it was a necessary economic step, but the 1960s and 1970s were a rough phase in Greece's architectural and cultural history. Mass market tourists cared little for archaeology and culture, but were drawn by cheap lodgings, sun, beer, wine, and sex. 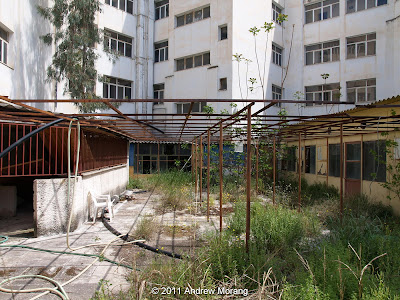 The hotel has been deserted since well before 1992, when I first visited Nerantza. A relative remembers when he taught water-skiing to tourists here in the 1960s. 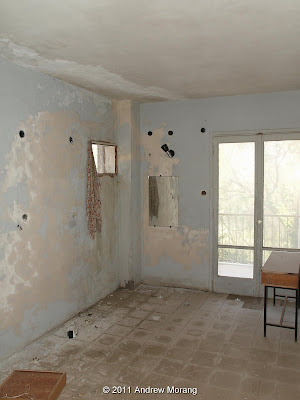 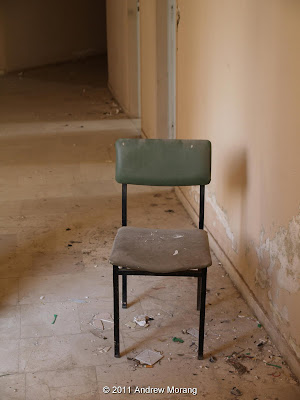 I remember these hotels: drafty, echoey, and charmless. As late as the 1970s, you had to find out when the hot water would be on, but you could always have a cold shower. The bathrooms were a wet mess after a shower. They were damaging to the environment because often they overwhelmed the local sewage treatment systems, and excess runoff ran into the sea. Tourists used far more water than local inhabitants. 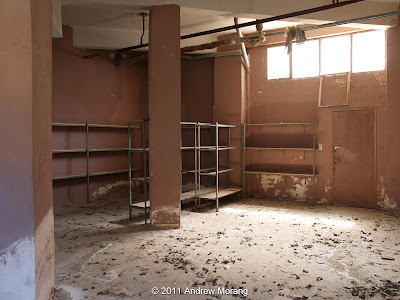 This was the kitchen. Breakfast was a boring affair with a mandatory two pieces of bread (yesterday's leftovers?), a piece of pound cake, Nescafe, orange drink, and a certain number of grams of butter. The government must have established this as a minimum standard for all hotels. No delicious, crusty peasant bread at these establishments. 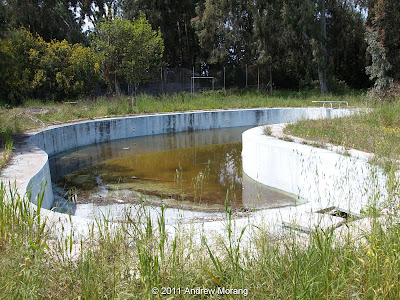 Here was a pool, even though the sea was across the street.

The problem with this hulk is no developer wants to pay for demolition, and the architecture is unsuited for contemporary hotel use. The United States is not the only country where commercial structures are abandoned, leaving the municipality (and taxpayers) to deal with demolition and environmental issues. 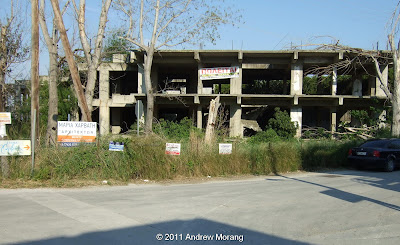 Nerantza must have experienced a building boom in the 1960s because there are a number of unfinished concrete frames along the main road. Did tourists lose interest? Was the setting not glamorous enough for a resort? With the completion of the high-speed rail link to Athens, the town is becoming a popular place for vacation and year-round homes. Farm fields are disappearing, to be replaced by concrete.

All photographs taken with an Olympus E-330 digital camera and Olympus 14-54 mm f/2.8 lens.
Posted by Kodachromeguy at 18:25 No comments: 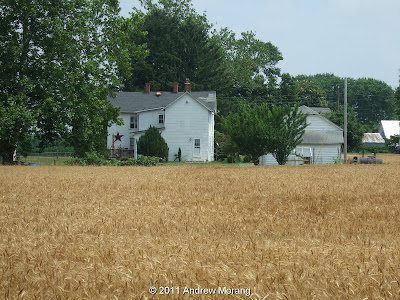 Farnham is a small farming town in the tidewater region of Virginia, located on the peninsula between the Potomac and Rappahannock Rivers. This area has been settled for three centuries, and 1800s farm houses attest to the farming heritage. You still see rich fields of barley and corn. 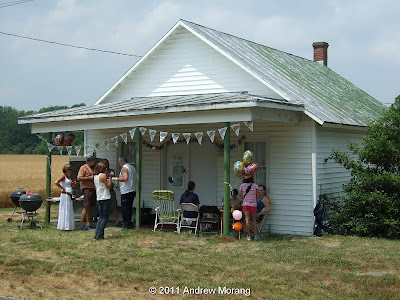 This is an old country store. A long-time local resident told me Farnham was prosperous in the 1950s and 1960s when a tomato factory was active and hired many local workers. The factory closed and the town fell asleep. The store would have sold gasoline, groceries, and odds and ends to residents in the old days. 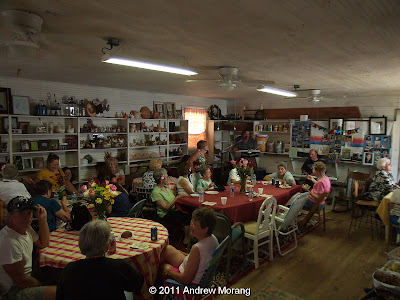 But the store has a new life. A lady from the Washington area retired to Farnham and bought the store and the adjacent house. The store is a perfect place for a party! 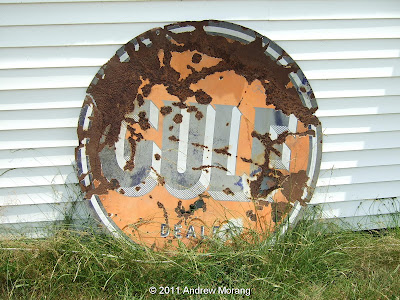 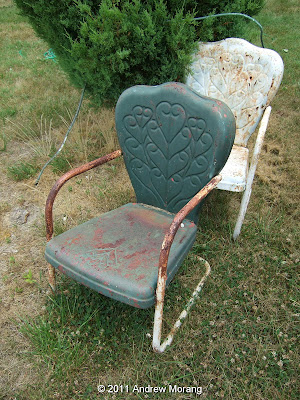 I remember seeing steel chairs like these at old resorts in New England. 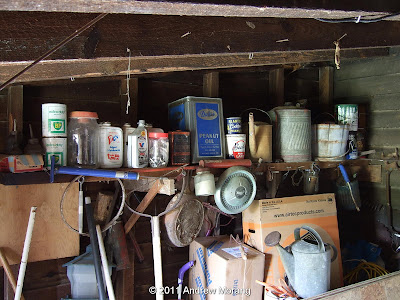 The back shed had the most interesting bits and pieces. 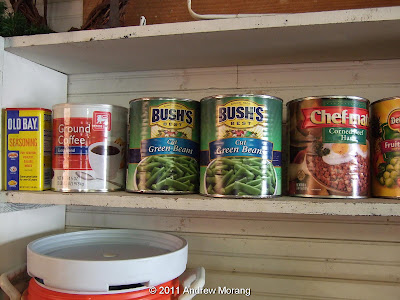 The main room looks great. This a nice way to revive an old building.

All photographs taken with a Fuji F31fd digital camera.
Posted by Kodachromeguy at 08:53 1 comment:

First the flood came, then the media came, and they photographed the poor, forlorn Yazoo and Mississippi Valley RR Station with water up to the first floor windows. Possibly this scene will became symbolic of the great flood of 2011. Fortunately, the water is receding and workmen, who were restoring the depot, can dry out the first floor and clean out mud and muck and eject a few snakes. 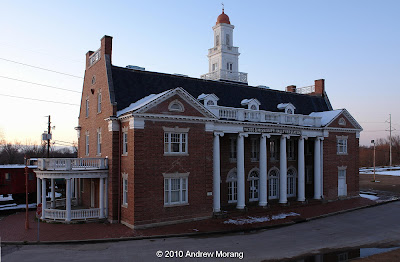 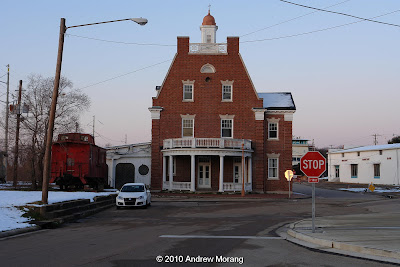 The depot, completed in 1907, is a handsome brick building on Levee Street, located just north of the concrete floodwall at the base of Grove Street. It was designed by the Chicago architectural firm of Daniel Burnham & Co. (We are not sure if Burnham himself designed the building, but he was well-known for his seminal designs of the Chicago waterfront and parks and the monumental buildings of the World's Columbian Exposition). Because of its location, the Vicksburg depot was vulnerable to exceptionally high water, and the first floor was flooded in the great 1927 flood. 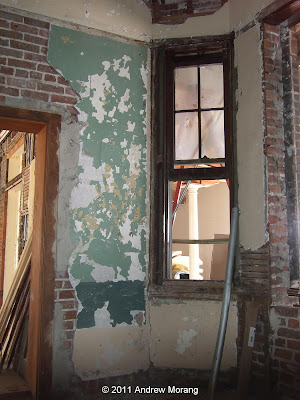 In the early 20th century, rail service ran north-south at least as far as Greenville and possibly to Memphis. I believe passengers along the east-west line (heading east to Jackson or west to Monroe, Dallas, etc) would have boarded trains at another depot just off the Cherry Street bridge. Passenger rail service in Vicksburg ended in 1959. I do not know who owned the Levee Street station over the decades. The ground floor had been used by various companies or activities but was also empty for years at a time. Remodeling removed almost all traces of authentic walls or features , so I did not take photographs in these areas. In the 1990s, a kidney dialysis company leased space here. But when remodeling began recently, a stationmaster's office or control room of some sort became exposed.

The second floor provided more of interest to an urban archaeologist. The stairs to the second floor were reasonably intact and still had their deep varnish. I have seen this time and time again: varnished wood has been painted, and after a few years, the paint looks nasty, but areas where the varnish was left original, it looks perfect. 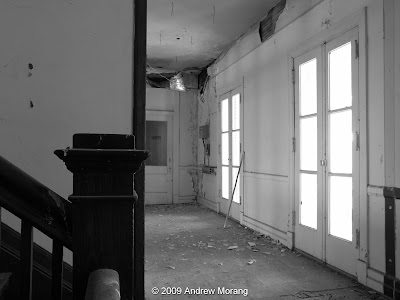 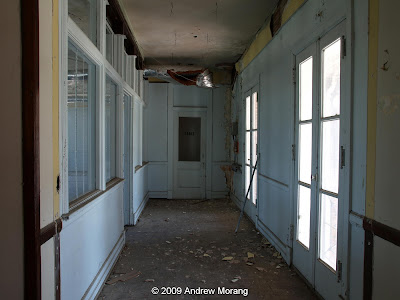 At the top of the stairs, a long hall runs along the east side of the building. Turn left and it leads to a ladies' lavatory. 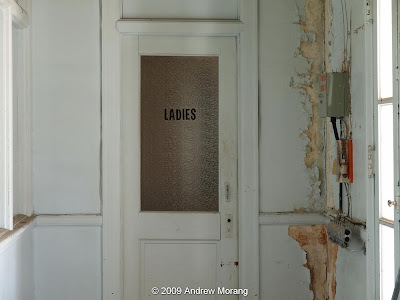 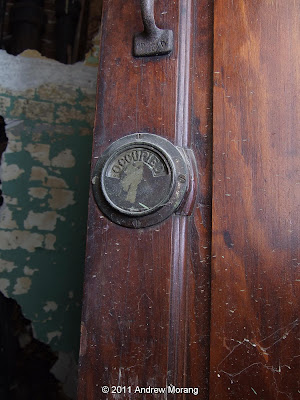 The lavatory retained some of its original features, including granite stall walls and handsome varnished stall doors. 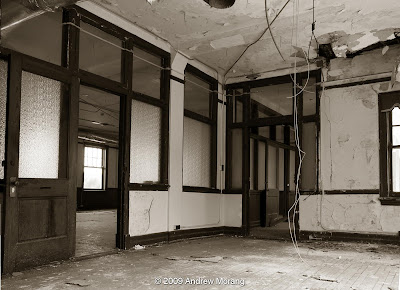 Turn right, and the hall led to a office or work room with some of its original trim. 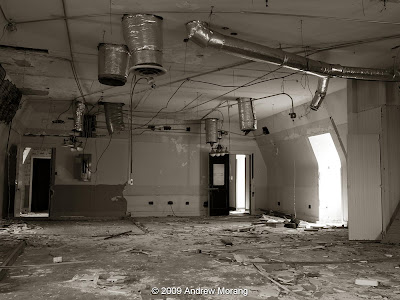 About 15 years ago, there were two apartments on the third floor. The tenants in one unit let me come up and access the flat part of the roof to take some photographs. Back then, it was still a bit odd to live downtown and must have been nice and quiet at night. The photograph above shows what is left of one of the attic apartments.

The window shows the view up Grove Street. I am not sure what will be done with the third floor in the current renovation. Fireproof steel stairs have been installed at both ends of the building to comply with fire codes. It is a lovely building, and I am glad it will be used as the Vicksburg Transportation Museum. Please come and visit. 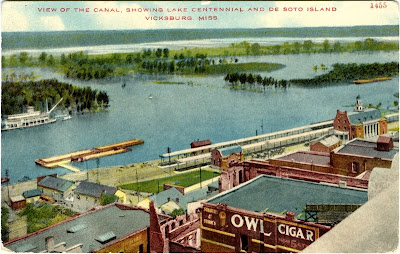 Finally, this postcard from the Cooper collection at Mississippi Department of Archives and History, shows the view of the railroad depot and the Yazoo Canal from the roof of the First National Bank building. 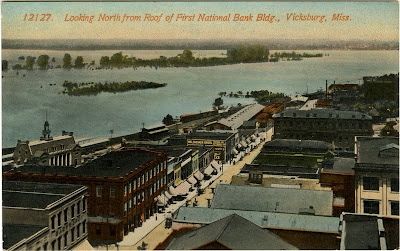 Here is another postcard showing Washington Street with the depot to the left. Vicksburg was a bustling industrial and commercial city then. How did it decline so badly in the latter half of the 20th century?
Posted by Kodachromeguy at 18:29 No comments: