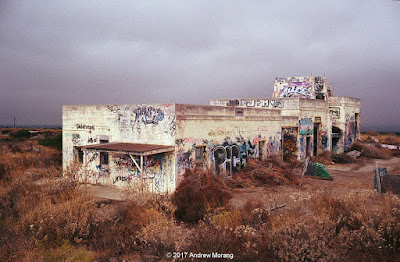 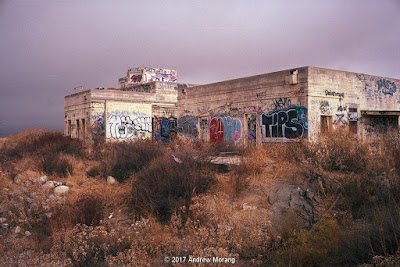 Redlands, California, is a historic town on the far east outskirts of the Los Angeles metropolitan area.  The historic core is well-represented by gorgeous Craftsman architecture houses in impeccable condition. But drive to the unincorporated town Mentone, turn north on some gravel roads towards the Santa Ana River wash, and you come across a wasteland of boulder fields, water retention pits, and hulking concrete bunkers. The bunkers are the remains of the Lockheed Propulsion Company, which developed and tested solid fuel rocket motors and propellants for use by the military and NASA between 1961 and 1975. The Grand Central Rocket Company used the site before 1961. 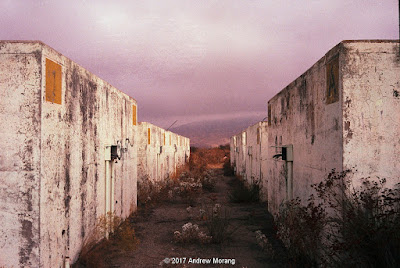 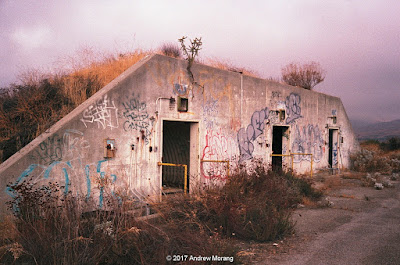 Southern California was, for many decades, one of the prime locations for the United States aerospace industry. After World War II, aircraft companies expanded their operations to encompass the new rocket and space technologies. This accelerated after the 1957 launch of Sputnik and in the 1960s, as we developed equipment and systems for the space race. 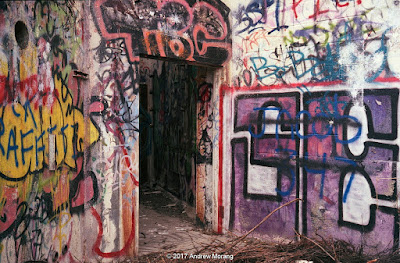 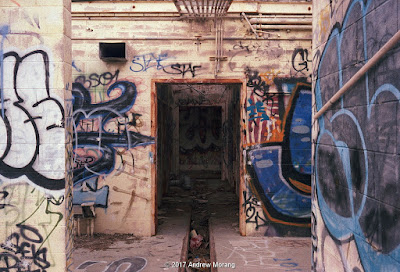 These were sturdy buildings, with thick reinforced concrete walls. Some semi-buried bunkers (see the fourth photograph) were made to store highly explosive materials. Bunkers like this are built with thick earthen sides and a thin roof so that an explosion will dissipate its energy vertically into the air. Note the troughs in the floor through which cables and conduits could be routed. 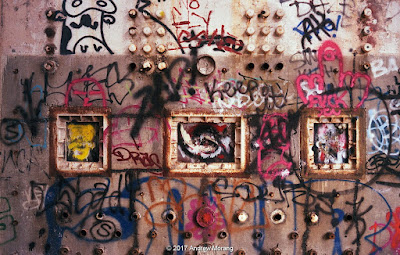 These rectangles contain glass at least 6 inches thick. They were designed for movie cameras to film rocket nozzle exhaust. I have seen windows like this at an old building (no longer extant) at the Waterways Experiment Station in Vicksburg, Mississippi. 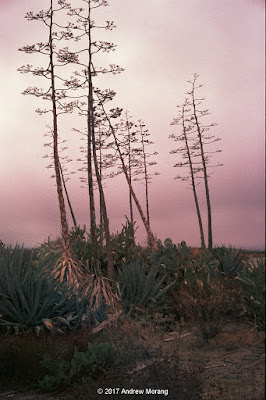 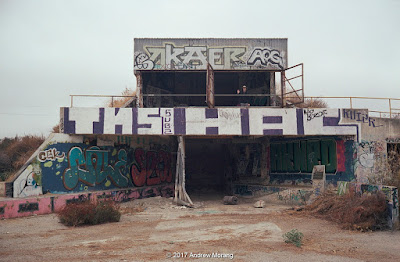 According to a Wikipedia article, the Lockheed plant closed in 1975 when the last contracts for the Apollo program ended and NASA selected Thiokol to prepare solid propellant for the Space Shuttle booster rockets. Solvents and other toxic chemicals have been measured in water wells in the region. Nevertheless, Lockheed-Martin Corporation has refused to pay for the clean-up of the contamination. Is this not a familiar story?

For an odd site in the California desert:  Salvation Mountain.

The photographs of the rocket fuel plant are from a compact Yashica Electro 35CC film camera with a fixed 35mm f/1.8 Color-Yashinon lens. My impression is that the lens may be giving slightly more coverage than 35mm, but regardless, it is a handy focal length for street and casual photography. The film was Fuji 200, purchased in Kathmandu, Nepal. I scanned the negatives on a Plustek 7600i 35mm film scanner using SilverFast Ai software. 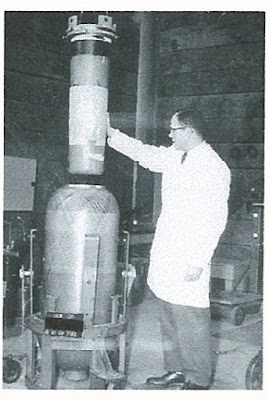 A retired rocket scientist, Mr. C.E. Juran wrote to me. He worked at the site, which was then run by Grand Central Rocket, from 1956 to 1966. He confirmed that Lockheed left a mess when it closed the site in 1974. Recall, in that era, there was minimal environmental awareness. The photograph shows Mr. Juran with a rocket being assembled; the propellant "grain" is suspended above the pressure case.
Update July 2022
A short commemoration of Mentone's 135th birthday in the Redlands Community News summarized the history of the rocket fuel facility.
Posted by Kodachromeguy at 21:28

This post is absolutely brilliant! Thank you so much for sharing!

I plan on exploring this site. Ive been to beamont site 1 (potrero canyon), site 2 off the 60 (lombarde Canyon). This one however has proven to be more difficult with the security. Nice pictures.

Is there a way I can contribute to this page? I have many other pics, especially ones on the other side that is all fenced off. (what is now the industrial park) I have pics of the map, old conference room, test labs, explosive storage and furnaces, and even an old ad from when it was Grand Central Rocket Co.

I m so glad to visit this blog.This blog is really so amazing

Vincent, I would be glad to add some of your pictures. Contact me at Kodachromeguy@bellsouth.net. Cheers!

Vincent, would there be anyway I could get those photos as well?

I never heard back from Vincent. I do not know how to reach him. His profile does not include a contact.

is there any other instructions on how to get there?

nice pictures wonder if my dad once roamed those buildings

Crafton Ave and Madeira ave. Go to the end of Medeira and look for the gate. Its a little bit of a hike till ya get to the metal storage buildings where you can hike down thru the boulders to get the roads where the bunkers are. Dont go alone! There may be homeless people there now and a couple of the sheet metal buildings have some agressive owls living in them but youll be warned before then buy the hive of Bees in front of it. Dont enter that one and if ya leave any more graffiti, I will personally hunt you down

Worked at this place when it was seven w enterprises. Loved exploring all the buildings here. Had lots of massive equipment left behind including its own fire station. Lots of asbestos in main office. Building where rockets were tested is incredible.