In mid-September, I drove by the Volkswagen Disposal Yard (where old VWs go to be dismantled or rebuilt) at 10987 Hwy 467, a few miles west of Raymond, Mississippi. I had been there before when it was active. But now it is sad. I saw far fewer hulks than in previous years. I walked to the trailer on the property, and a cheerful lady came out to talk. She said her brother once repaired the cars, but he was sick and had just returned from the hospital. She asked me if I wanted all the old Beatles. I could have them that day! Please, take them away. (I decided to pass....) 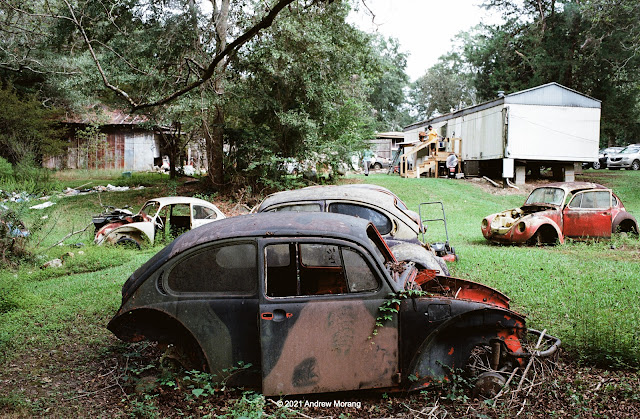 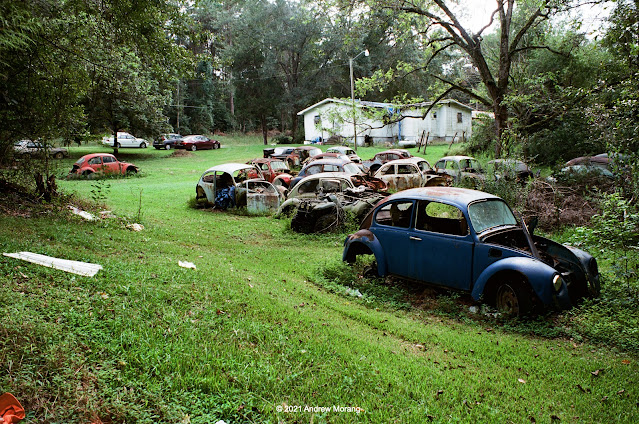 Ten years ago, this field was just covered with Beatles, a few Golfs, and a smattering of other models such as a Type 411. I do not remember seeing any busses, but he probably repaired them, as well. 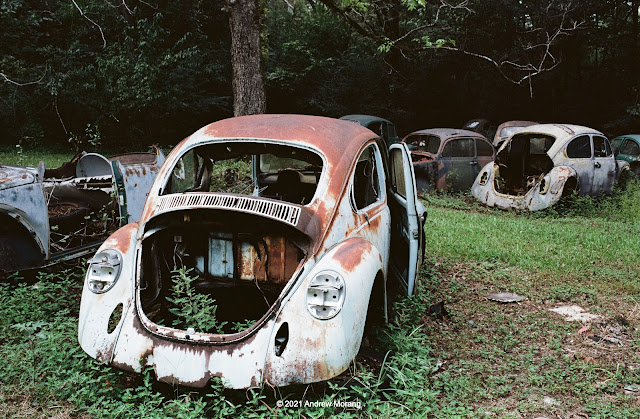 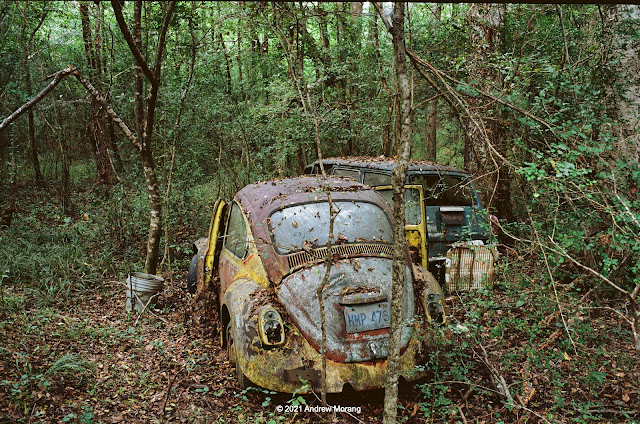 The nice lady said there were more cars in the forest (jungle) behind the trailer. Yes, indeed, there were a mess of relicts back in there. 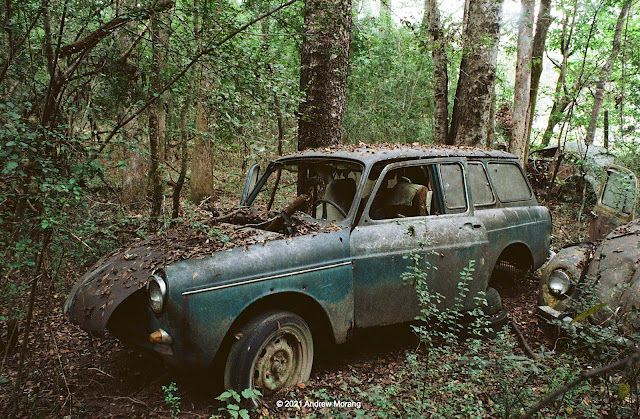 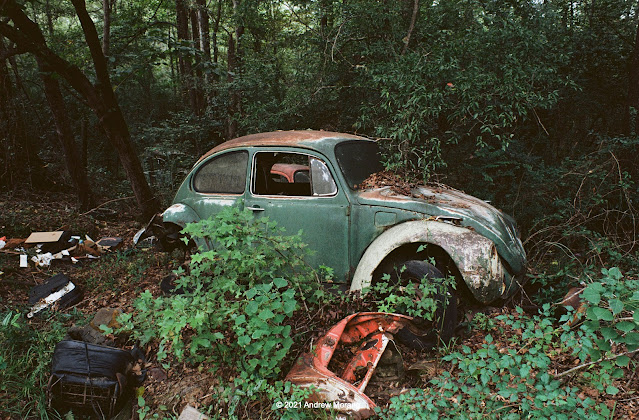 The little station wagon was the Type 3 Volkswagen, known in the US market as a Squareback and in Europe as the Variant. My dad bought one of these when we lived in Turkey in 1965. We later shipped it to USA, and I ended up with the car in undergraduate school. The flat rear-mounted engine was only 1500 cc and put out about 55 horsepower, which was inadequate for US freeways. Top speed was about 65 mph. But it was excellent on mountain dirt roads, and I could sleep in the back.

Sadly, all of these cars look to be beyond repair or rebuilding. Long-term readers may remember that I visited a Volkswagen yard in Moab, Utah, with many examples in much better shape (click the link).
These photographs are from Kodak Ektar 100 film, exposed via a Honeywell Pentax Spotmatic camera with 28mm and 35mm lenses. I used a tripod for all frames. Northeast Photographic scanned the negatives with a Noritsu system. The colors in the scans were too vibrant, and I reduced the saturation with Photoshop CS6 software.
Posted by Kodachromeguy at 06:00 1 comment:

Last May, mid-COVID, I was bored, restless, and grumpy. My wife and I had not been far afield in over two years. Walking and bicycling were getting boring. It was time for another road trip to central Mississippi.

The Harris Carmichael Store is on Hwy. 27 near Utica. Mr. Carmichael died in 2005, and I do not know if the store operated after that date. It is is good condition, so someone maintains the property.

I had driven on Hopewell Road before while driving from Mendenhall to Crystal Springs. I saw some old buildings that were worth another visit. I returned on May 20 with Royal Gold 25 film in my Leica and looked around. The unincorporated community of Hopewell, in Copiah County, is pretty quiet.

These are negatives from the long-discontinued Kodak Royal Gold 25 film. I knew that it had been frozen since new and felt confident that it would be viable. I exposed it at Exposure Index (EI) = 16 in my Leica M2 camera. For many frames, I used my Leitz 50mm ƒ/2 Summicron-DR lens and tripod-mounted the camera. This was the Type 2 Summicron from the 1960s, a superb optic that many film photographers still use. I scanned the negatives with a Plustek 7600i film scanner operated with Silverfast Ai software.

My previous experiments with Ektar 25 film, which was the same emulsion, were less successful, most likely because the Ektar was even older. For current use, buy the modern Ektar 100 film.

A few months ago, I wrote about an abandoned car wash at 4420 Robinson Road in Jackson (near the semi-unused Metrocenter Mall). The paint was imaginative, but it looked like a suitable topic for black and white film, as well. Without further ado, here it is, a monochrome visual treat for the eyes. 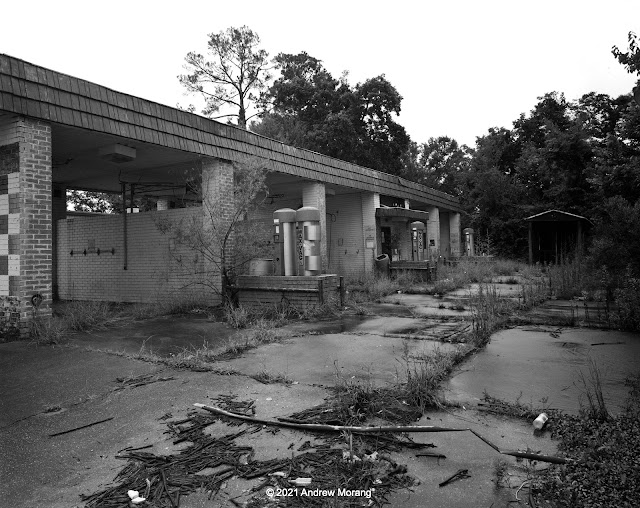 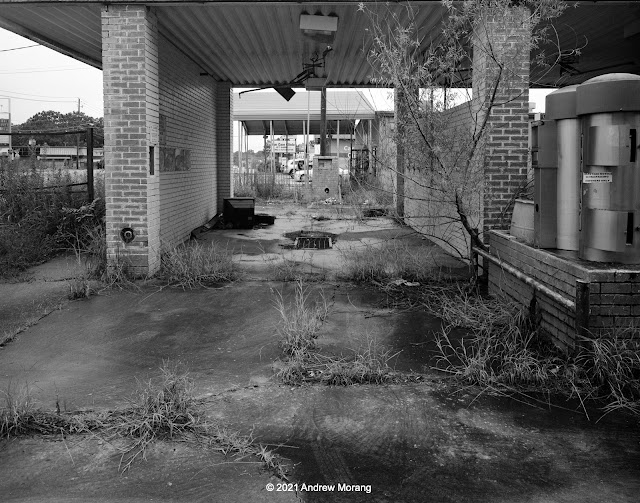 Across the street is an old pizza restaurant and a closed Shell gasoline station. I recall buying fuel there because it was a bit cheaper there than at many other outlets. But now - a gas station that could not make a profit? 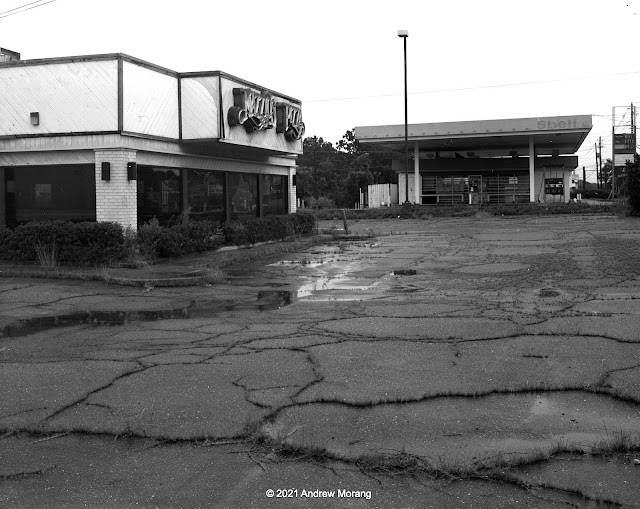 We will have more Jackson photographs in the future. Can't you wait?

In early 2021, a friend told me about his grandmother's country store on MS Highway 27 somewhere northwest of Utica. I did not find it initially, but came across another abandoned house with an address of 6494. It was accessible because the power company had trimmed the trees and brush under the power lines.

There is nothing too special about this house; it is an example of a modest domicile of the type built in large numbers in the early 20th century. It still had siding of asphalt shingles, similar to roof shingles. This was common on mid-income housing, and I recall seeing many triple-decker apartments in Medford and Chelsea, Massachusetts, with this type of shingle exterior. 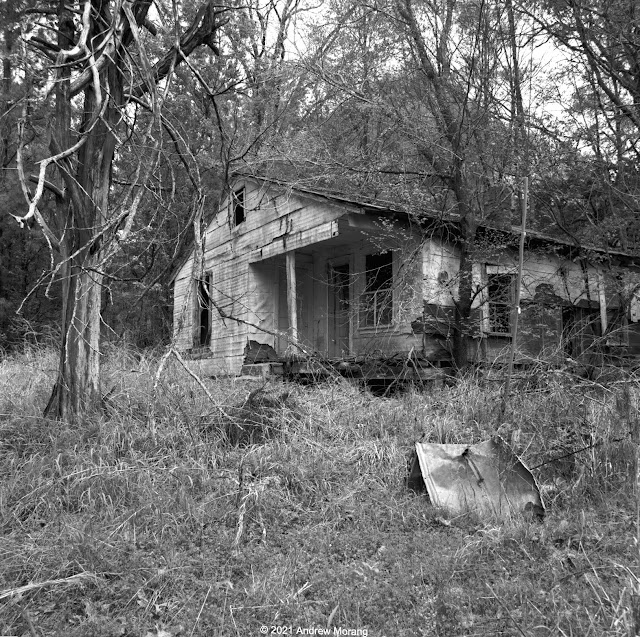 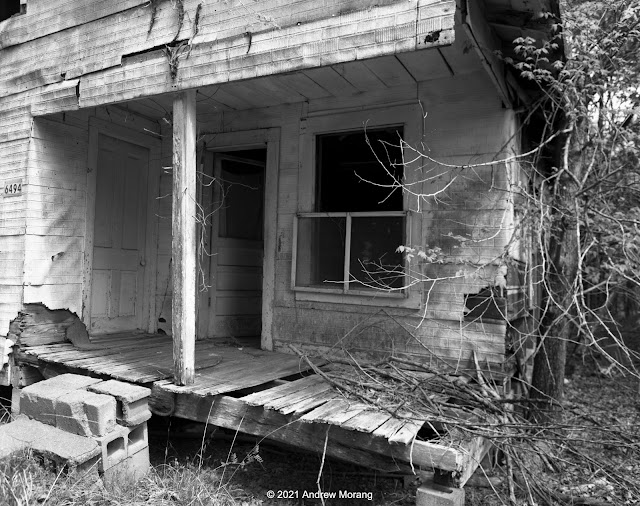 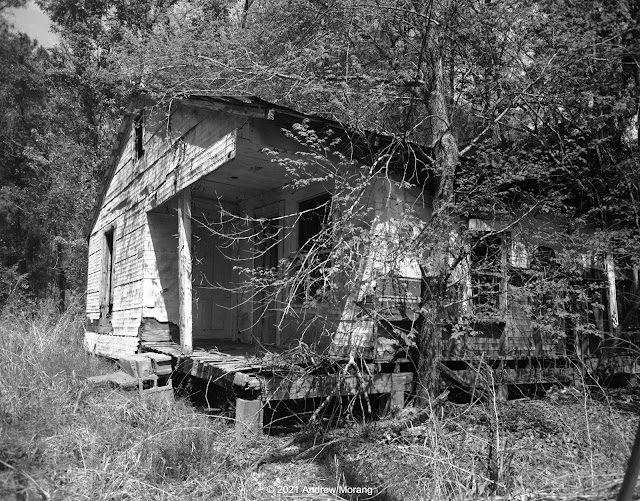 The first photograph is from Kodak Panatomic-X film in a Hasselblad with 50mm ƒ/4 Distagon lens. The two lower photographs are 4×5"Tri-X negatives using a 90mm ƒ/6.8 Angulon lens.


Skykomish, a historic railroad town, is on the first flat terrain west of Stevens Pass in the North Cascades in Washington State. The town had a raucous railroad and mining history. From Skykomishwa.gov:

Skykomish, known affectionately by railway employees, rail fans and it's citizens as "Sky" got its start in life from the Great Northern Railway. In 1889, James J. Hill (the Empire Builder) decided to extend his railroad from Montana all the way to the Pacific Ocean. Mr. Hill hired John F. Stevens, famed as the builder of the Panama Canal and his work with the China-Trans Siberian Railroad, to determine the exact route of the railroad.

After discovering Maria’s Pass in Montana Mr. Stevens continued west to Spokane and the Columbia River. Crossing the Cascade Mountain Range they settled on building the railway through the pass that now bears his name.

John Maloney was hired to help survey and design the railroad and was advised to develop a homestead seventeen miles east of Steven’s Pass, in an area called the “flat spot”.

Later, during the construction of the railroad in 1892, the soon to be town, was called “Maloney's Siding”. The depot was a boxcar sidetracked for this purpose. After completion of the railroad in 1893 a post office was established and the town became known as “Skykomish”. The town was platted in 1899 and it was incorporated on June 5, 1909. Mr. Maloney built a store to supply the needs of railroad men.

The town contained a roundhouse, shops, coal yard, and switching equipment. In 1927, the Great Northern started to use electric locomotives to pull the trains through the Stevens Pass tunnel. At first, I was perplexed why the railroad switched to electric. Maintaining electric pylons and overhead lines in the hahsh winter climate must have been a maintenance challenge. Then I read that the issue was ventilation and smoke in the tunnel. Railroad companies had learned that the fumes from coal locomotives could be deadly in tunnels, especially if the train was forced to stop. Eventually, ventilation was installed in the Stevens Pass tunnel and today, diesel locomotives provide the traction for goods trains. There are no electric pylons now. 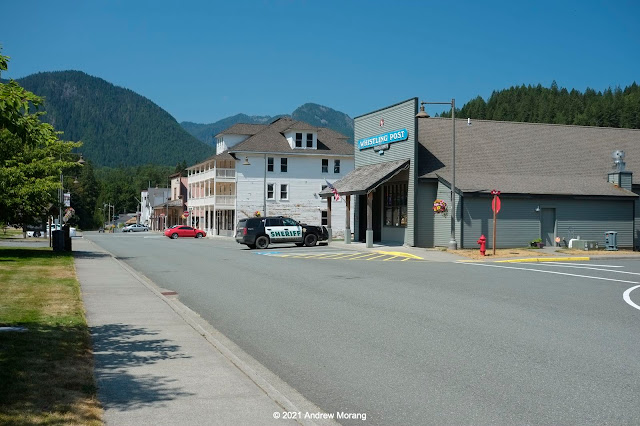 Skykomish is quiet nowadays. Route 2 bypasses the town to the north across the South Fork of the Skykomish River. Most travelers rush past the turnoff. This the same US 2 that will take you to the Upper Peninsula of Michigan and then, via another segment, to New Hampshire and Maine. I do not remember stopping in Skykomish in the 1970s when I lived in Washington. 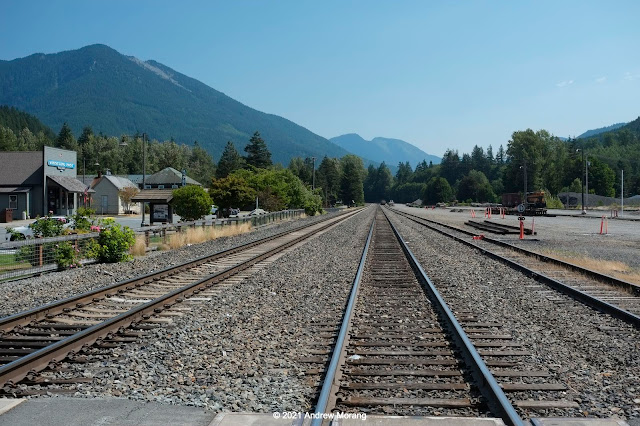 BNSF trains thunder through town, but the shops and depot are gone. 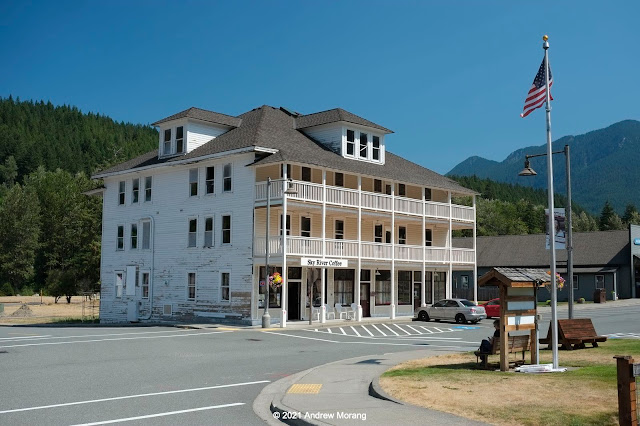 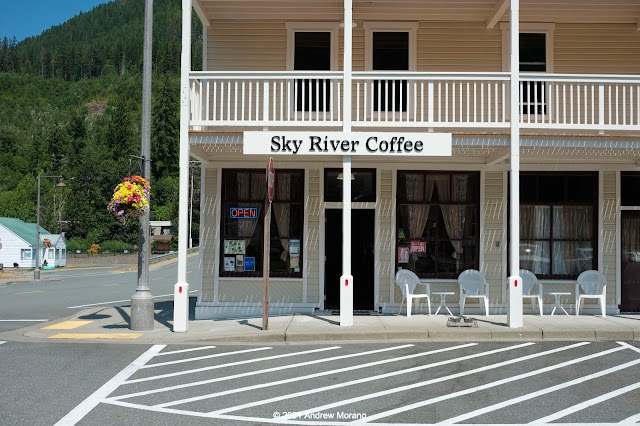 A young couple owns the historic Skykomish Hotel on East Railroad Avenue (click the link to read the long sordid history). The lady runs the Sky River Coffee shop, and the gent is repairing and overhauling the building with intent of opening vacation rentals. The hotel was formerly on the Washington Trust for Historic Preservation "Most Endangered Places" list. 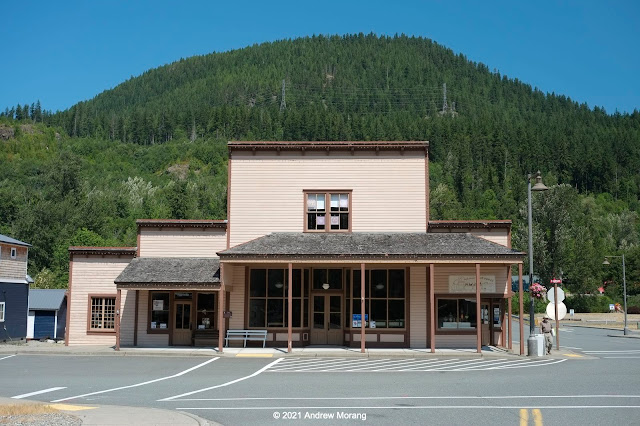 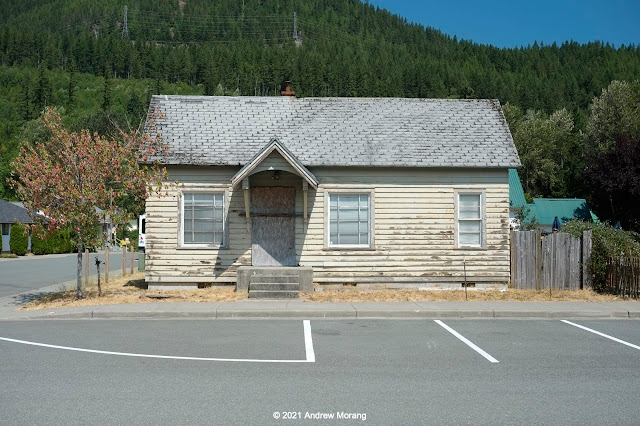 Many of the historic buildings in town have burned. This is the architectural fate in so many older towns throughout the country. 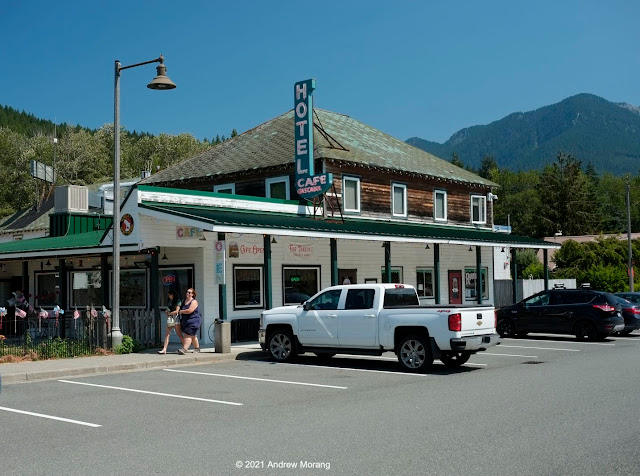 The 1922-vintage Cascadia Inn Cafe & Lounge is open for business. Railroad view and train noises.
This was our short tour of Skykomish. Stop the next time your drive though the north Cascades on US 2 and grab a coffee at the Sky River.
The photographs are from a Fuji X-E1 digital camera.
Posted by Kodachromeguy at 08:00 No comments: