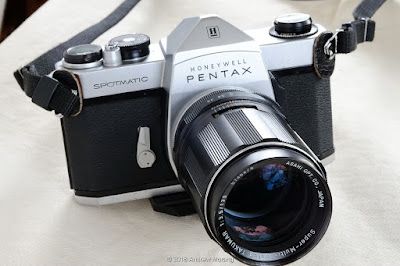 The 135mm ƒ/3.5 Super-Multi-Coated Takumar (or the almost-identical older Super-Takumar) lens for M42 screw-mount cameras from Asahi Optical Company of Japan (more recently known as Pentax) is one of the great bargains for film photographers and some digital photographers.

The 135mm focal length was popular through much of the 20th century. Leica and Zeiss sold 135mm lenses starting in the 1930s. During the single-lens-reflex boom of the 1960s and 1970s, all the Japanese companies made 135 lenses for their respective cameras. Often, that was the second lens a budding photographer bought, until the marketers convinced amateurs that they "needed" the off-brand 80-210mm zoom lenses (i.e., more profit margin for camera stores).

For more information about the wonderful Spotmatic cameras, Casualphotofile wrote an excellent summary in 2017. Mike Johnston wrote about the Spotmatic in Theonlinephotographer in 2017 and explained why the Pentax 50mm ƒ/1.4 lens was one of the finest 50s in the film era. The table below lists the various Spotmatic models.

M42 refers to the thread-mount of 42×1 mm used to attach the lens to the camera body. This was a common size in the 1960s and 1970s. European, Russian, and Japanese companies made hundreds of M42 lenses in various focal lengths. Many people consider Asahi Optical Company's lenses to be among the best optically and mechanically in that era. It is common to buy an old Takumar lens that will still operate perfectly, while a drastically more expensive Leica lens of similar age will likely have haze or film on the inner elements and need professional cleaning and re-lubrication. The Takumar lenses have a following among serious photographers today because they can be mounted on most mirrorless digital cameras. The M42 mount lost popularity in the 1970s because it was slow to exchange lenses, and companies like Nikon and Canon used faster bayonet mounts on their cameras.

The 35mm ƒ/3.5 Super-Takumar or SMC Takumar is another under-appreciated gem.  I tested my bargain 35 around town and at the Tomato Place.

Asahi (or Pentax - the names are confusing) made a M42 135mm lens as early as 1957. It was modified over the following years with improved coatings and different cosmetics, but the optical formula remained approximately the same. The multi-coated version I have was, according to one source, in production from 1971 to 1977. It is a relatively simple design of 4 elements in 4 groups. 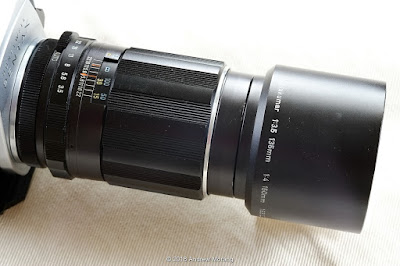 My lens has the label "Super-Multi-Coated" on the front ring. This refers to multi-coating on the lens elements to reduce flare. Asahi introduced multi-coating in 1971 and advertised widely to emphasize how it was a unique technology. That is not entirely correct because other companies were already using multi-coating on specific elements in their optics. Asahi did not invent multi-coating, having bought patents from Optical Coatings Laboratories Inc. (OCLI), California. Regardless, Asahi's advertising was effective, and soon customers demanded multi-coating for all their lenses, whether they needed it or not. It tended to be most effective on complex wide angle lenses with many elements. On a simple long lens like the 135, multi-coating would have minimal benefit. Regardless, the best way to reduce flare is to always use a hood, and the 135 Takumar was supplied with a long deep hood.

Despite the obvious benefits of a hood, most point-and-shoot cameras of the 1980s and 1990s did not have any way to attach a hood for two reasons: 1. Users had been told that multi-coating negated the need for a hood (wrong); 2. Casual users would not use them even if supplied (lazy or uncaring).


I owned a Leica 135mm ƒ/4.0 Tele-Elmar lens for 20 years but used it for maybe 20 pictures. We just never bonded. This Pentax 135 has been in a cabinet for who knows how long, also unused. But increasingly I am appreciating its ability to compress space, especially for urban scenes and railroad tracks. I am an old geezer now; my viewpoint and photo interests have changed. The two frames above are from Itta Bena in the Mississippi Delta on a hazy, glarey day.

Crenshaw is a small Delta town on Hwy 3 a short distance northeast of Clarksdale. Most of the commercial block is abandoned, and some of the shops have lost their roofs. Many small Delta towns look like this.

Webb is off Hwy US 49E southeast of Clarksdale and along the Little Tallahatchee River. It is another semi-abandoned town with most of the late-19th and early 20th century commercial buildings empty. These two photographs are on Kodak BW400CN film.

Finally, I want to do some more experiments with trees. So many farm fields have these lone, proud trees rising from the flat soil, apparently immune to lightning and other hazards. So maybe I will start taking "pretty" pictures. Beware.
Posted by Kodachromeguy at 08:00

That's nice work you got from the 135. I have a Mamiya 135 for my Spotmatic which I like as much as the SMC Pentax lens. I find them useful in public events where I need to get in a little closer to the subject and also for zoo shots where I often use them with a 2x telextender. In any case I never feel an slr system is complete without at least a 35 and a 135 along with the normal lens.

Thanks. Take a look at the bargain 35mm f/3.5 Super-Takumar in the Tomato Place:

Hi, if you are referring to the article above, I am in central Mississippi.