On the Dixie Overland Highway, Historic US 80 - Monroe to Ruston, Louisiana (LA-07)

Monroe is the Big City of north central Louisiana. I did not find it very inspiring architecturally, but it is busy, with plenty of commercial activity and lots of traffic. Much of the architecture where US 80 comes through town is strip America of the ugliest nature. I did not spend much time in Monroe and need to explore more in the future. I would like to visit the Chennault Aviation and Military Museum as well as the cypress swamps of Black Bayou Lake National Wildlife Refuge (north of the city). Antique Alley in West Monroe (west of the Ouachita River) would also be interesting.
Yes, it is strip America. Maybe I should do an article on the ugliest strips I can find.
This bayou must be part of a drainage system for storm water and who knows what other effluent. I wonder if there are any alligators during high water?
Heading west, US 80 runs north of I-20 for a spell then crosses and runs south of I-20. Many of the neighborhoods west of West Monroe are converting into McMansion developments, often gated (American architecture at its finest). But remnants of older farm houses as well as plenty of trailers remain. 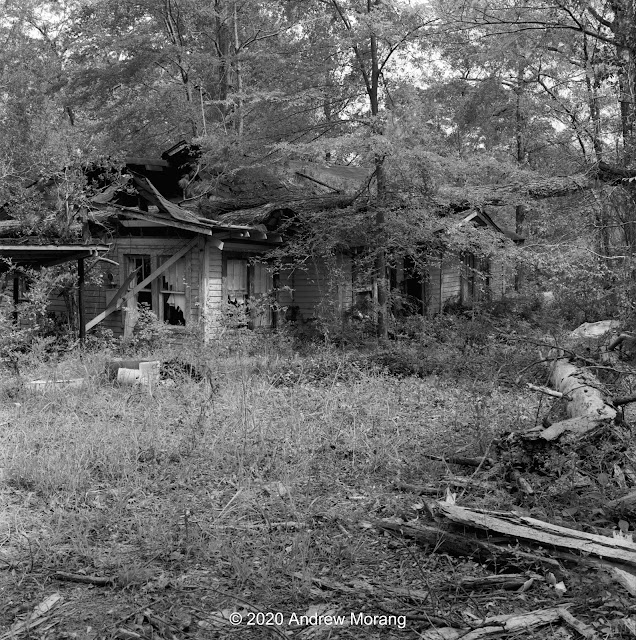 I stopped at this old house in Claiborne. There are likely more like this in between the new developments. 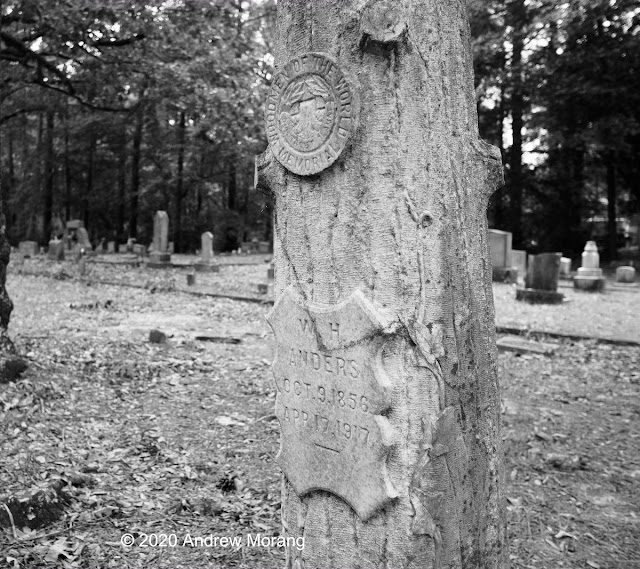 The Mount Zion Cemetery in Calhoun, just north of where 80 crosses I-20, was peaceful and shaded by mighty trees.
The crossing at Interstate 20 consists of truck stops, a Dollar store, and a couple of dead restaurants. Not too inspiring. 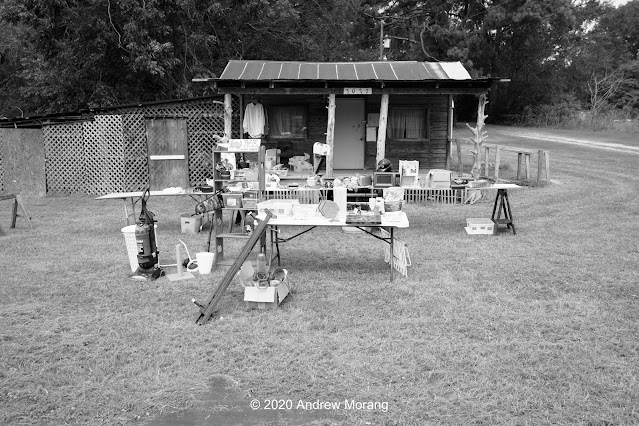 Calhoun is an unincorporated community in Ouachita Parish; a quiet little place. I continued driving west.Choudrant is a village in Lincoln Parish. The village's web page advertises "Louisiana's Front Porch." Here I saw a surprising number of older homes in various states of repair. The former Masonic Hall on Elm Street was intact but am not sure who uses it.
Choudrant proved to be reasonably interesting. I did not see many people about.
This was the end of my US 80 exploration on this outing. I continued west towards Ruston, which is a nice college town, hosting Louisiana Tech University and Louisiana Delta Community College. It will be worth a revisit some other day. Thank you for riding along on the Dixie Overland Highway. For background information on US 80 and the Dixie Overland Highway, the Federal Highway Administration has a detailed history.
The photographs above are a mixture of Kodak Tri-X 400 film exposed with a Hasselblad 501 CM camera, Tri-X from a Fuji GW690II medium format camera, and digital images from a Fuji X-E1 digital camera.
Personal Note.  Dear readers, I hope you were all well and healthy this past year (2020), horrifying as it was regarding the virus, our national incompetence in taking medical precautions seriously, and our continued descent politically and socially. 2021 should be better in almost all respects. Stay strong, explore your world, comfort and support your relatives and loved ones, believe science and data, and stay optimistic. Happy New Year to y'awl!
Posted by Kodachromeguy at 08:00 2 comments:

On the Dixie Overland Highway, Historic US 80 - Girard and Start, Louisiana (LA-06)

We continue on our exploration westward on historic US 80 through rural Louisiana.Girard is an unincorporated community in Richland Parish, Louisiana, on the west side of the Boeuf River. Originally, the town could ship merchandise to other markets via the river. But starting in the mid-1800s (before the Civil War), the railroad became the prime means of shipping agricultural products. This is now solely a bedroom community, with houses and a few stores. 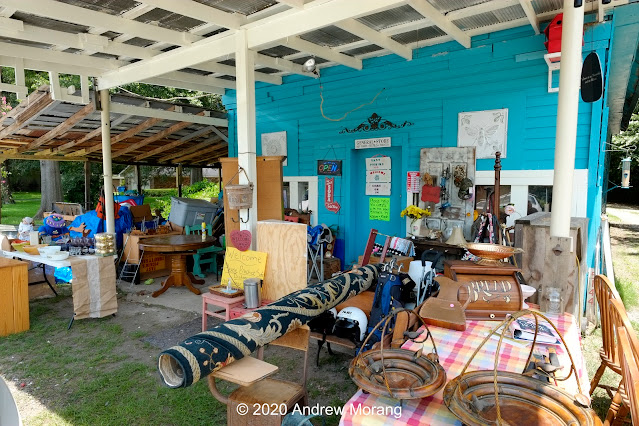 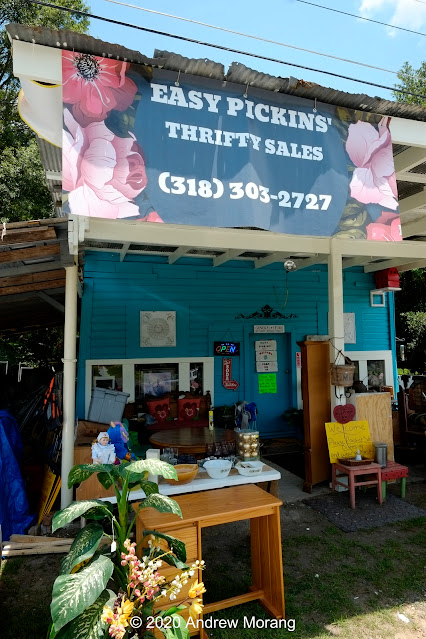 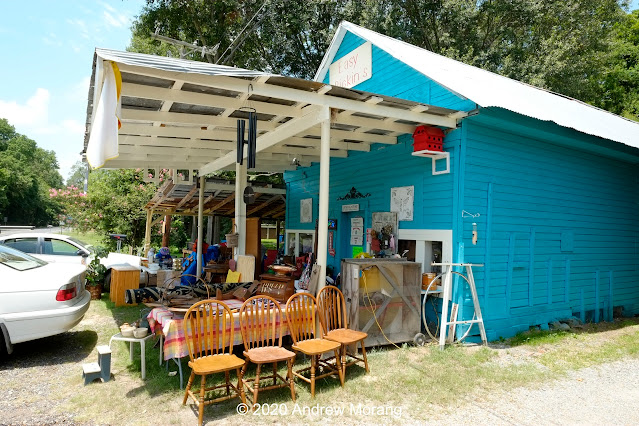 The Easy Pickins' Thrifty Sales store is in a nicely-restored old grocery at 5144 US 80. It was open and quite interesting. I asked about old cameras, but the owner only had some old Kodak box cameras and Polaroids. There are always Polaroid cameras at these types of stores, but the lack of most types of instant film makes them useless today.
Start is another unincorporated community along US 80, this one in Richland Parish, Louisiana. It consists of an unused (?) gin, big gas station, and some homes. 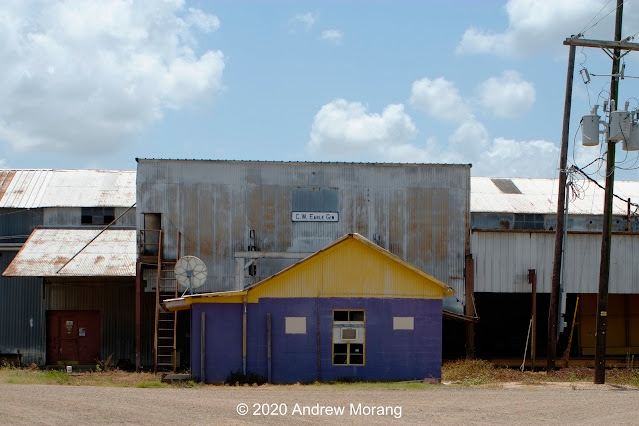 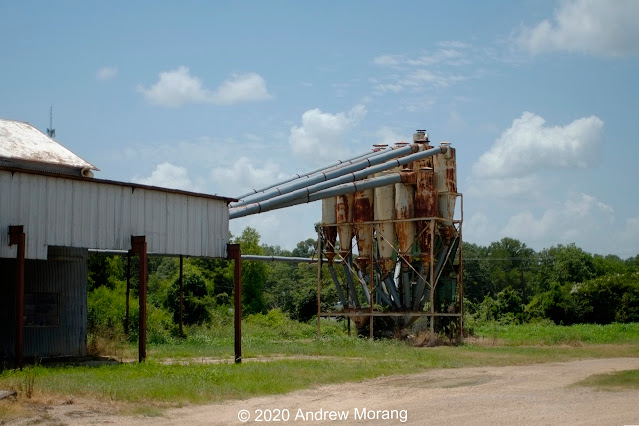 The buildings of the C.W. Earle Gin, address 5947 US 80, are a short distance south of the highway. Some of the equipment and siding was quite rusted, and I could not tell if this is a going concern or not.
This is all the excitement in Start. The next community west is Monroe, the "big city" of central Louisiana. We will continue our trip on US 80 in the next article. Thanks for riding along.
These digital images are from a Fuji X-E1 compact camera with the 18mm ƒ/2 Fuji lens.
Posted by Kodachromeguy at 08:00 No comments:

Well this was a pleasant surprise. Because of some mysterious combination of temperature, rainfall, humidity, or sunshine, we had an unusually colorful autumn here in Vicksburg. Sure, the foliage was not as as brilliant as you see in New England, Scandinavia, or the Appalachian Mountains, but still it has provided a visual delight. Here are a few examples from around town. Warning: pretty pictures again, no decay this time.

It was about a week early for the best foliage along Confederate Avenue. I turned right on Pemberton Boulevard and walked past the 1937 headquarters building (now used as office space).

When you reach Union Avenue, you have two choices. Turning left, you ascend the hill towards the Shirley House (surviving from before the Civil War) and enter thick woods. The former Civil Conservation Corps (CCC) camp is near an overgrown roadway near Old Graveyard Road. 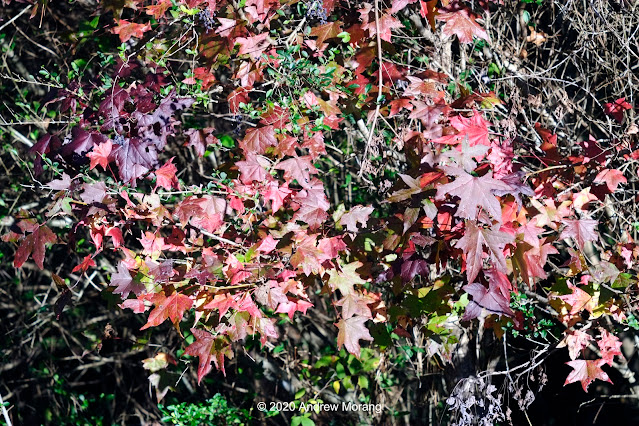 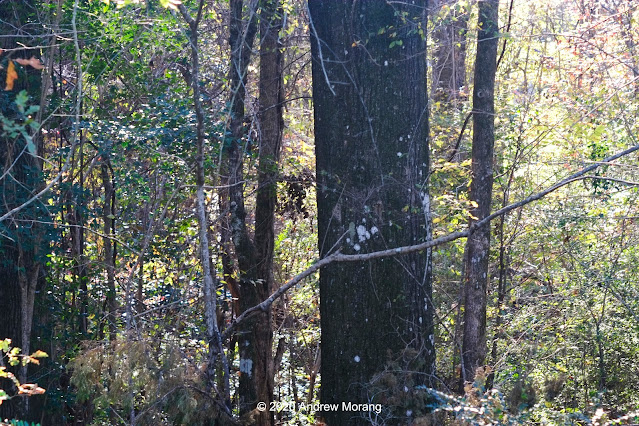 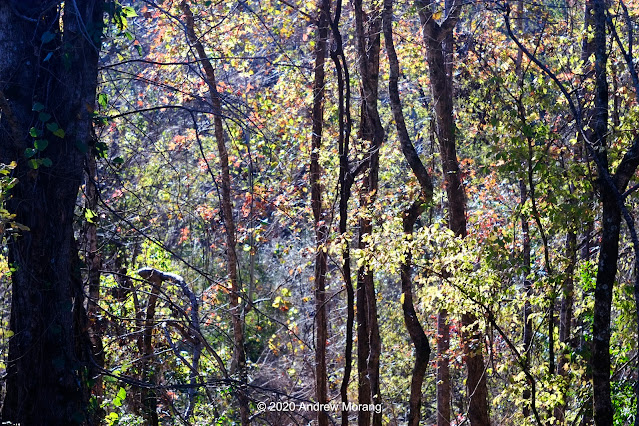 If you turn right on Union Avenue, you return towards the main parking lot and visitor center. 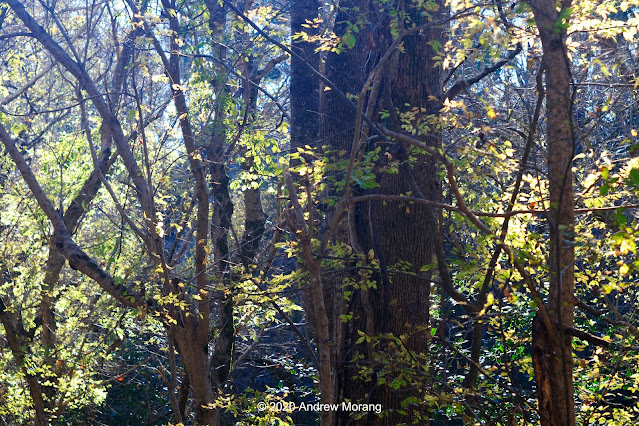 Confederate to Pemberton to Union Avenues is a popular walking and jogging route, about 2.8 miles. The part near the memorial arch is noisy because of the freeway next door, but the woods are pleasing and shaded in the summer.

To reach Kings Point Island, you need to take the ferry across the Yazoo River. To reach the ferry, drive on Haining Road at the Port of Vicksburg, turn right on a ramp, then follow the signs to Kings Point Road. The ferry runs all day. If it is on the other side of the river when you arrive, they will come and pick you up. You need a car with high ground clearance (or a truck). 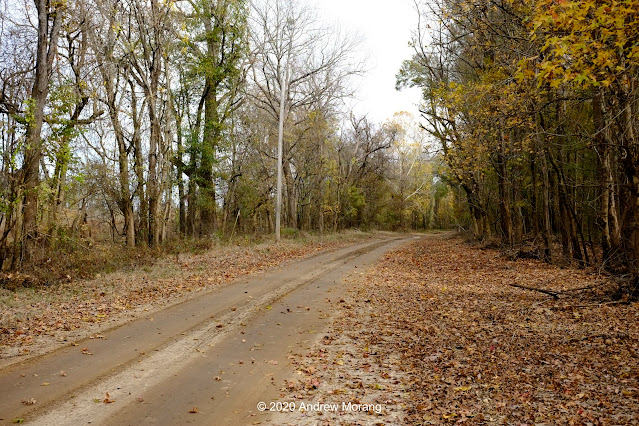 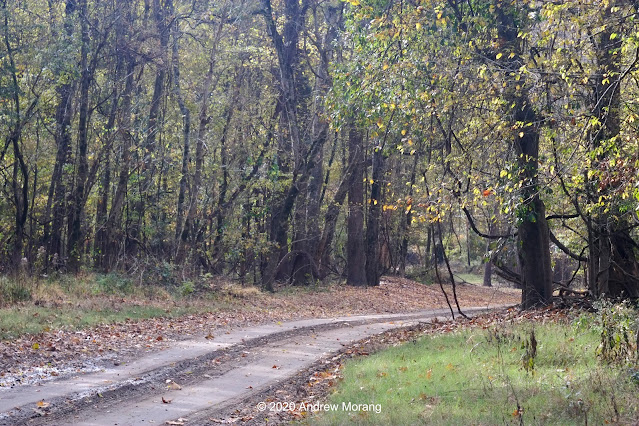 Kings Point Road heads due west. I have driven it in the past when it was dry. But this time, despite a general lack of rain this fall, there were muddy sections that I did not want to risk in my little car. We could only go a mile or two and turn around. Time for a Bubba truck.
Most of thesephotos are from my Fuji X-E1 digital camera on which I mounted a recently-acquired 1950s Leica 9cm ƒ/4 Elmar-M lens. This old manual focus lens works surprisingly well on my Fuji camera. I will test it more in the future on film after I send it off for a cleaning.
Posted by Kodachromeguy at 08:00 3 comments:

On the Dixie Overland Highway, Historic US 80 - Dunn and Rayville, Louisiana (LA-05)

We continue our trip west on The Dixie Overland Highway, now called US 80. Coming out of Delhi, 80 continues through a mixture of farm fields and an occasional forest patch.
I came across some remnants of the old 80 that may have served travelers during the pre-interstate era. 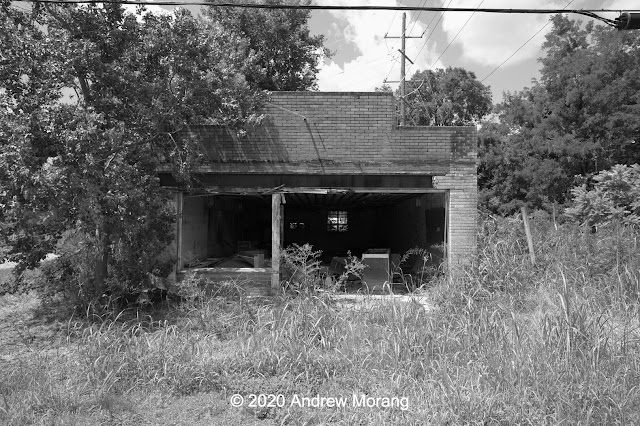 These two abandoned stores were at the corner of Weems Road and US 80 in Dunn. As in so many rural areas, old country stores have been abandoned and left to the weather and vines. 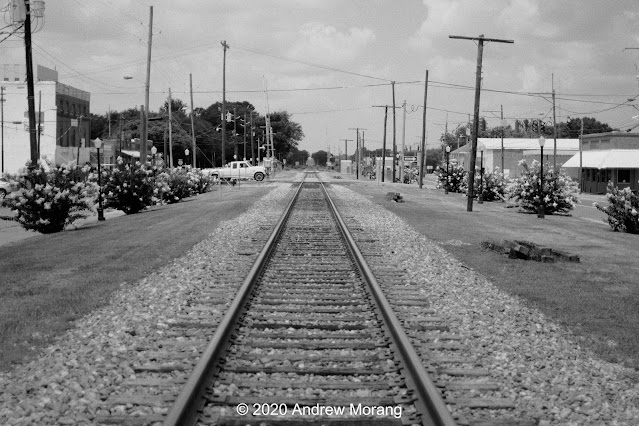 As in these other small towns along US 80, the Kansas City Southern trains thunder through several times a day. There was no depot that I could see. 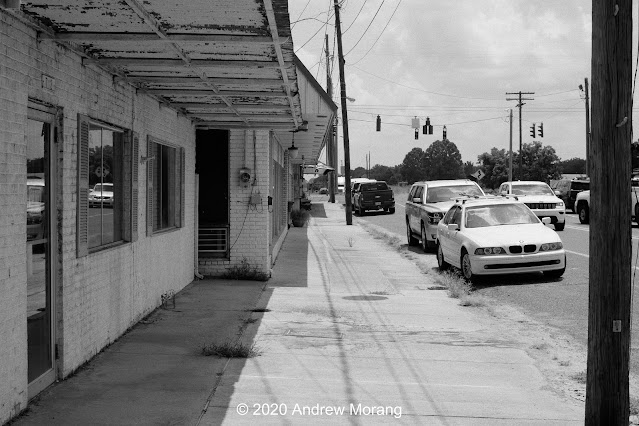 The main road through town is Harrison Street, which is also US 80. A restaurant at the corner was pretty busy, but I was concerned about the virus and did not go in to get lunch. I was pleased to see that most people were rigorous about wearing masks, more so than in Mississippi. 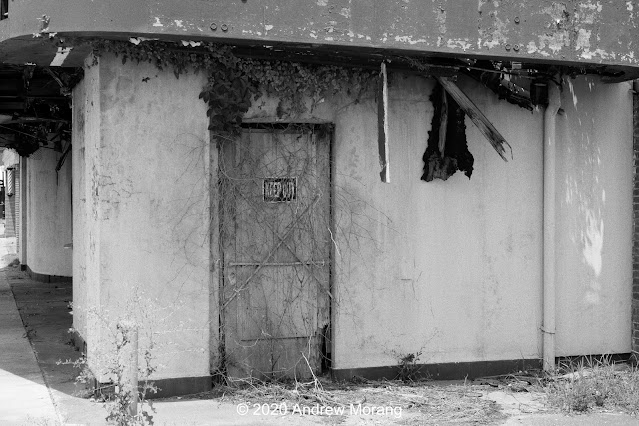 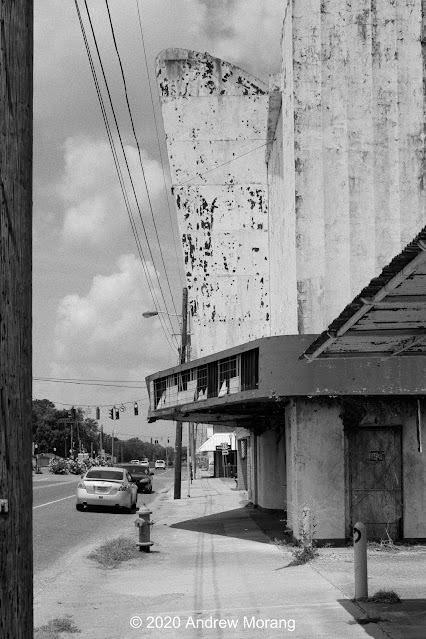 The old Joy Theater on Harrison Street was a classic 1930s theater of the type you would have seen in many towns. The facade was interesting, but unfortunately, the building is a wreck. In the first picture, you can see a tree growing out of the interior. 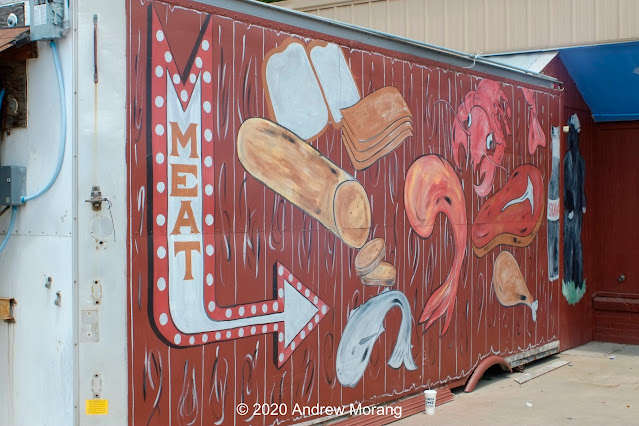 One last picture, and this one stays in color: Robinson's Meat Market at 402 Madeline Street. What a great folk art advertisement, with lobsters, steaks, and sausages. The proprietor said a fellow from New Orleans painted it.
Most of these images are from a Fuji X-E1 digital camera on which I mounted an Olympus OM 35mm ƒ/2.8 Zuiko Shift lens. The shift function let me correct for converging lines optically at the time of taking the picture (as opposed to using software after the fact to correct convergence). Most pictures of buildings that you see on the web show converging vertical lines, such as the edges of the building. But when you look at the scene with your eyes, your brain accommodates the convergence and the lines appear straight. Nikon and Canon make modern shift lenses, but very few contemporary users buy these rather technical lenses. I expect that most never used a large format camera, where you can shift the front standard upwards to correct the convergence.
If you want background information on US 80 and the Dixie Overland Highway, the Federal Highway Administration has a detailed history.
In the next article, we will continue west on US 80. Thank you for riding along!
Posted by Kodachromeguy at 08:00 4 comments:

On the Dixie Overland Highway, Historic US 80 - Delhi, Louisiana (LA-04)

Heading west on the historic Dixie Overland Highway (now US 80), we reach Delhi (DELL-hi, Loo-zee-ANA) only a few miles west of Waverly (see the previous article).
According to Wikipedia, Delhi, which is in Richland Parish, was originally called Deerfield. It looked like a clean and cheerful town, at least during a blazing hot summer day in mid-July 2020. The temperature was hovering around 35° C (95° F), and it was a challenge to use the dark cloth on my 4×5" camera. I wimped out and also took some digital snaps.
Heading into town from the east, you see a number of old commercial buildings, nothing too exciting.
These two unused gasoline stations are on the south side of US 80 as it enters Delhi from the east. I do not know the architecture well enough to identify the original oil companies that built the stations. Both were faced with enameled steel panels, which are very durable and remain clean. Unfortunately, the roofs on both units were wood, and 501 has collapsed.
Within the main town, I did not see much of photographic interest except for the old Waterworks building on Depot Street. I did not see a railroad depot. Is it gone?

West of downtown, I drove past an impressive elevator/silo complex owned by Helena Chemical. I like industrial photography like this and plan to do more of it in the future.

In the next article, we will continue west on US 80. Thank you for riding along.