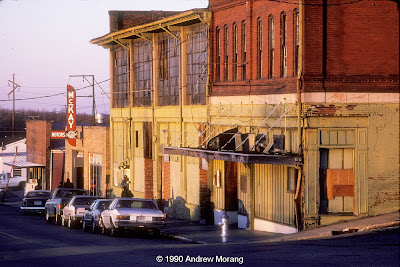 North Washington Street was once a busy commercial thoroughfare, but over the years, many of the warehouses and shops have been torn down. One of the few survivors is this 1911-vintage automobile showroom at 913 Washington Street. A Vicksburg Post article (27 December 2010) states the building was originally used for wagon and carriage manufacture but was later a Packard showroom. I found a June, 1990, Kodachrome slide in my archives which still shows a Packard sign. 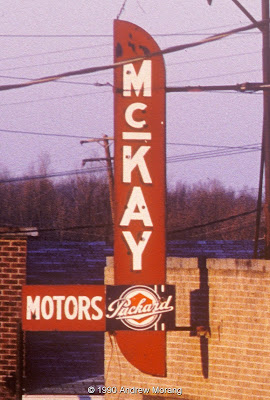 The Packard web site does not list McKay Motors but does list a dealer called Christian & Brough Company at 919 Washington Street. 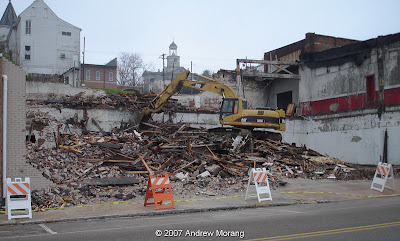 Today, only the southern section of the building stands. The center unit was dismantled by the City of Vicksburg on February 1, 2007. The roof had deteriorated but several people have told me that the building was not in such dangerous condition that it could not have been saved. This section may have once housed a 7-Up bottling plant, which was in operation in the 1950s. 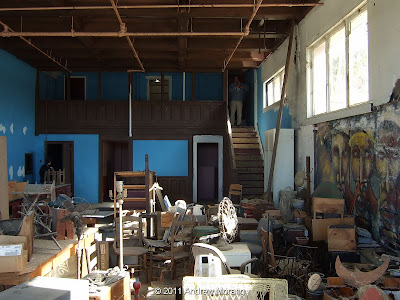 During the 1970s through the early-1980s, the building housed the Monte Carlo club, which booked nationally-known rhythm and blues bands. In the early 2000s, a club named Faces operated here for a short while. The owner put a lot of effort into fixing and decorating, but I am not sure why it closed. The good news is a local businessman, Mr. Malcolm Carson, has bought the building and is in the process of cleaning and renovating it. 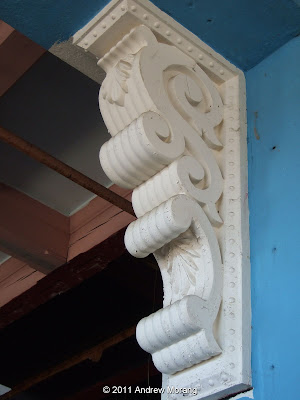 The interior still has some of its original architectural decorative elements, like this beautiful support. 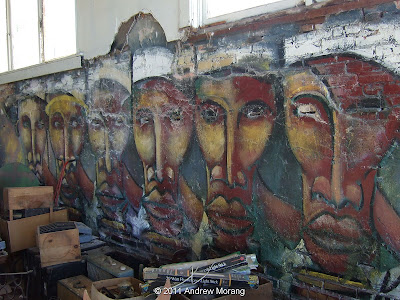 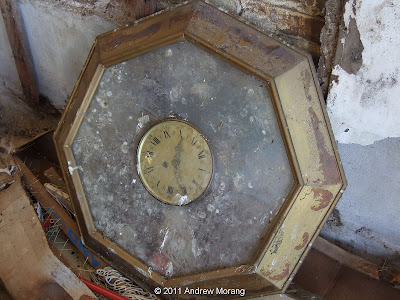 Among the remnants of the "Faces" era are piles of furniture and props and some spectacular murals painted on the walls. The one above is on the ground floor on the south side. The props (debris) include chairs, Victrolas, tables, and clocks. 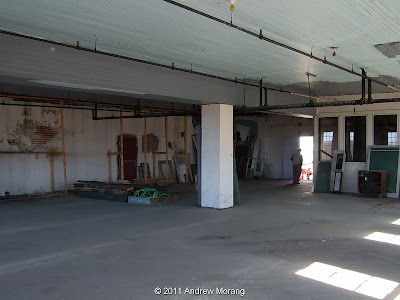 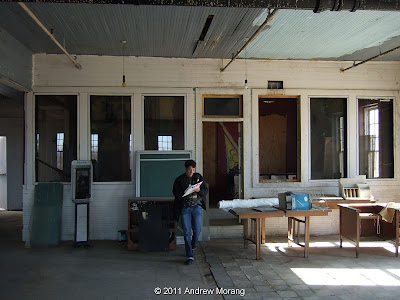 Walk up the stairs to the second floor and you see another wide open space that could have numerous future uses. I was told that this may have once been the automobile repair shop, but I did not see evidence of lifts or hydraulic equipment, and possibly people are thinking of the building next door (the one that was dismantled). 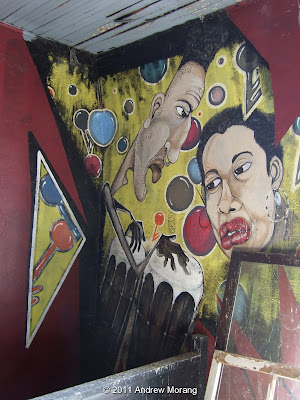 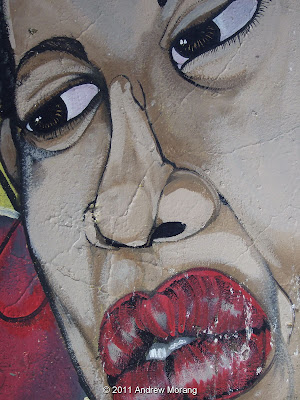 More of these funky murals are on the second floor, the example above at the top of the stairs. 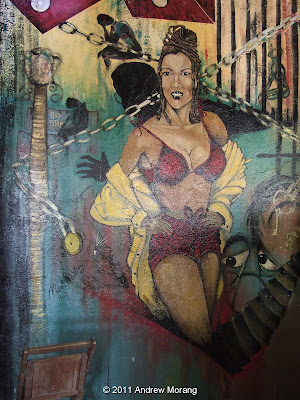 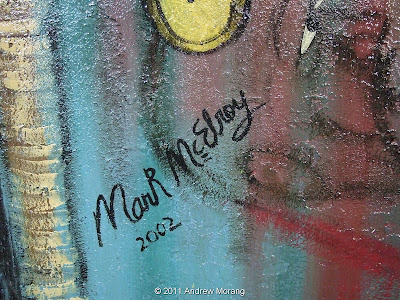 They were painted in 2002 by an artist named Mark McElroy, whose signature appears on the lower right of the mural of the robust lady. 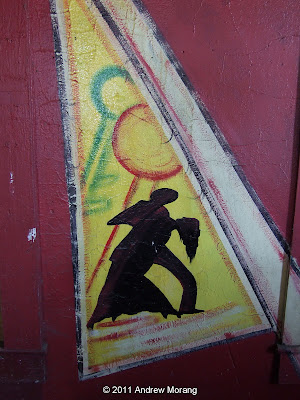 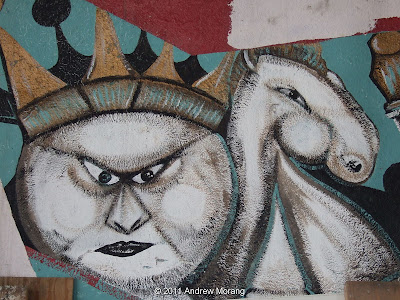 I love the silhouette of the dancing couple, and the scowling lady glares down at the audience from near the ceiling. 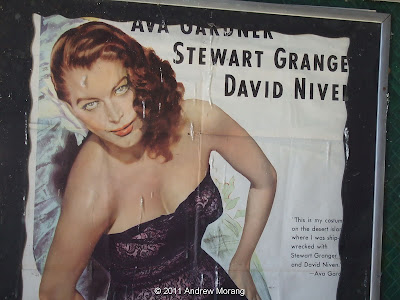 There are even movie seats and a signboard amongst the debris. 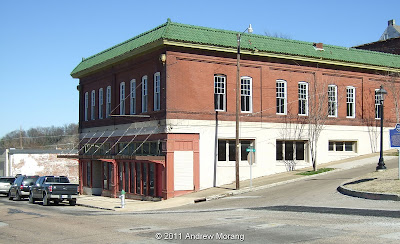 What can be done with this building? A group of artists and historians may form a non-profit organization to preserve what remains of Margret's Grocery, which is deteriorating rapidly from the weather and vandals. Possibly 913 Washington Street could become a museum of Afro-American heritage. The location is perfect because Vicksburg already attracts tourists, and the Corps of Engineers' Lower Mississippi River Museum and Interpretive Site is right across the street. Maybe we finally have enough momentum to revive downtown.

(All interior images are from a FujiFilm F31fd compact digital camera. Photographs 1 and 2 are scans of Kodachrome 25 transparencies, taken with a Pentax Spotmatic camera and the 150 mm f/4 Super-Takumar lens.)
Posted by Kodachromeguy at 17:01 No comments: 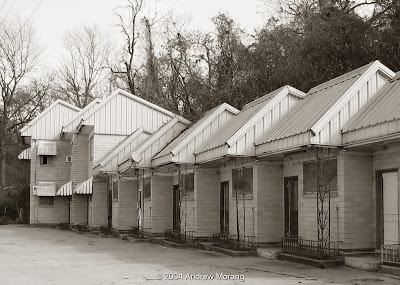 North Washington Street runs from downtown Vicksburg to the junction with 61 bypass. On the east side of Washington Street, near the turnoff at Haining Road, which leads to the Port of Vicksburg, sat the Jo-Anna Motel (address 1750 Washington St.). The brick rooms were arranged in an en echelon pattern with a two-floor unit at the north end. A friend told me she remembered when it was built in the late 1940s or early 1950s. According to the Preservation in Mississippi blog, the architect was N.D. Galo, presumably of Vicksburg. 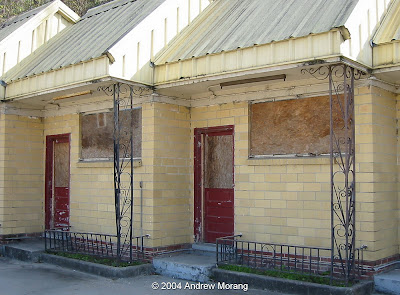 The Jo-Anna was typical of the American trailer court, catering to a post-war generation on the move. With flowers in the planters out front, it was probably a cheerful place in its prime. But since the 1980s, it was nasty-looking, and I recall seeing equally rough cars parked there. However, some renovations had been made, and the asbestos tile roof was replaced with a new metal roof in the 1990s. 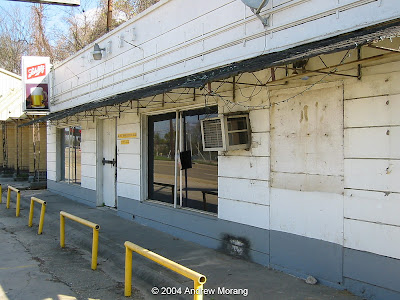 The Jo-Anna once had an attached restaurant. My friend said she remembered going there with her parents for Sunday dinner. But as you can see, the restaurant had converted into a beer joint of seedy disposition. 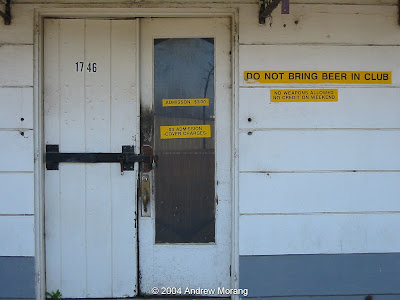 At least they asked patrons to not bring their weapons. Maybe the establishment provided them. All the buildings were purchased by the Park Service and demolished around 2005 or 2006. The land is now part of the Vicksburg Military Park but is not being used. 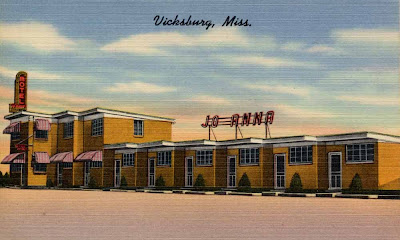 This scan of a post card is courtesy of a friend who writes the Preservation in Mississippi blog. Notice this shows the units to have flat roofs. Also, the artist took some geological liberty when drafting the post card: the hill behind does not exist. Maybe tectonics since the 1950s resulted in some orogeny (mountain-building)..... 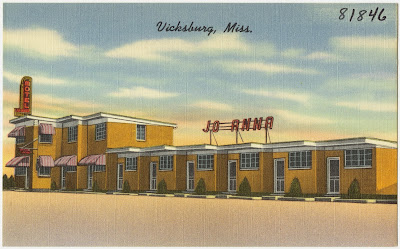 Update August 20, 2014. I found the origin of the postcard. It is from the Tichnor Collection at the Boston Public Library. Some 25,000 post cards from the BPL are posted on flickr.
Posted by Kodachromeguy at 11:39 2 comments:

One cold day in January of 2006, Vicksburgers were astonished to hear that the building at 515 Clay Street had collapsed. The parking garage across the street provided a great view of the site, and as you can see from the first photograph, part of the building crumbled out into the street, squashing a car in the process.
In the mid-1980s, I remember visiting the Thomas furniture store on the lower floor. It occupied an old-fashioned store lined with elegant tall wood shelves. A set of ladders on rails paralleled the shelves, allowing a clerk to climb high to retrieve merchandise. Some libraries had the same type of rolling ladders. I am sorry I never photographed in there; it looked like a time warp from the 1920s. 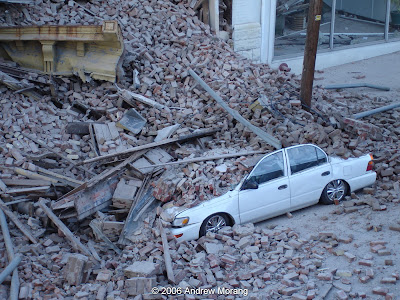 In the following days, we learned from the Vicksburg Post that the building was being renovated by a couple who moved here from New Orleans. Some workers had cut some joists in the morning of the 25th, and in early afternoon, heard ominous creaks and groans. They rushed out just in time to avoid being squashed. 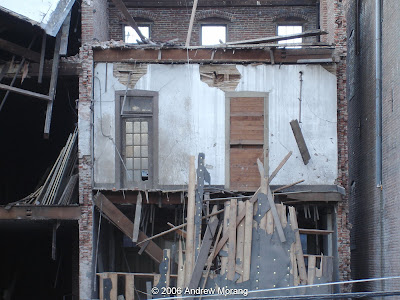 So what happened? Look at the way the building was built, which was typical of late 1900s commercial buildings in the United States. The vertical bearing walls are three bricks thick. To support a joist, it is inset into the wall by only the width of one brick. The reason why the joist did not penetrate completely through the wall was that, theoretically, if it broke or failed, it would pop out of its support ledge rather than cantilever out and pull the wall down as it rotated downward. As long as the walls continued to stand, new joists could be installed and the building rebuilt. By the way, this kind of construction is deadly in an earthquake. 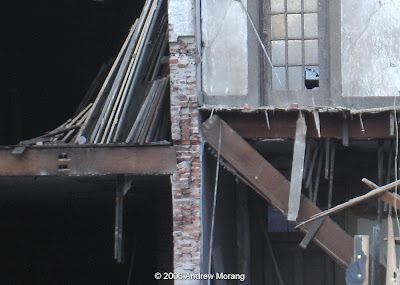 In the enlargement above, look at how the horizontal beam on the left only penetrated one brick into the wall. The top was tapered away from the wall to ensure that it would tip down without catching the wall. The beam on the right failed exactly as designed. But obviously, something went wrong and the front part of this building collapsed along with the floors. 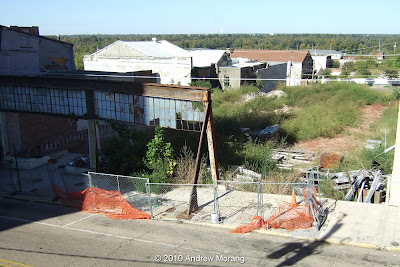 The sordid saga continued for four years. The city and the building owners argued over who was responsible for cleaning up the street. Half of Clay Street was blocked for over a year. Then the owners wanted to raze the whole structure; the city wanted part of it saved. Years went by with almost nothing happening. We're not known for high speed action here in Vicksburg. As you can see in the last photograph, now all that remains is a piece of the cast iron framework and a window. Sad, another piece of our architectural heritage lost.
This is what the block looked like sometime in the early 1900s. Vicksburg was a prosperous and real city then, with electric trolleys and commerce and industry. The postcard is from the Cooper collection at the Mississippi Department of Archives and History.

Photographs of the collapse taken with a Sony DSC-W7 compact digital camera.
Posted by Kodachromeguy at 21:19 No comments: