Feltre (Venetian: Fèltre) is a quiet town in the province of Belluno in Veneto, in northern Italy. The Dolomites loom to the north.  Feltre is the southern end of the Alta Via 2 hiking trail, which snakes through the Dolomites starting in Brixen, and a few nights here are a grand way to end an exhausting trek, sleep in, eat, and let your blisters drain. 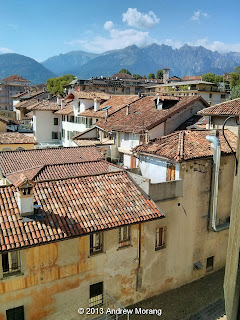 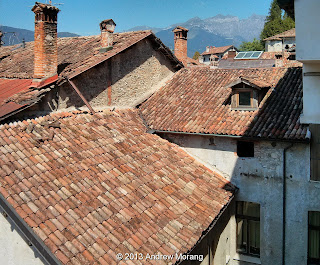 Within the Dolomites, much of the architecture and tradition is Tyrolean because the mountains were part of the Hapsburg Empire until the end of the first World War, after which they were ceded to Italy. Feltre was largely destroyed in 1509 and rebuilt in classical Renaissance style, so it is decidedly Italian rather than Austrian. Your view from the hotel window tells the story: clay tile roofs, narrow lanes, and the Dolomites just to the north. 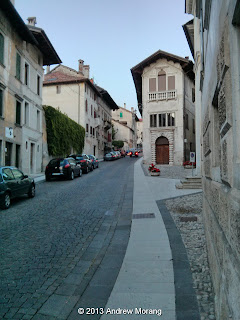 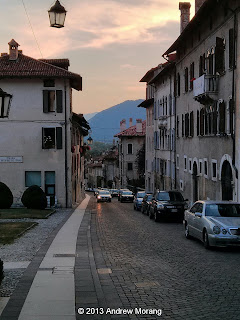 Feltre draws you in many ways.  First, it is a city of narrow stone-paved roads. 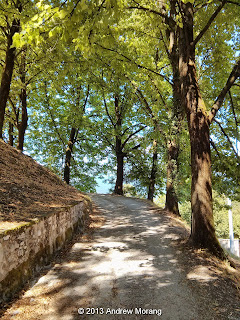 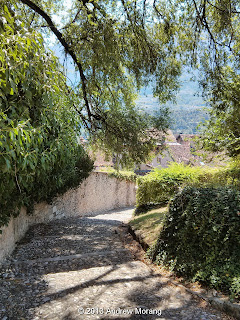 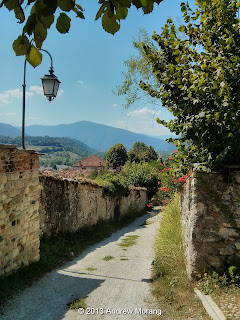 The town is full of shaded walking lanes.  Just walk randomly and something nice will be just around a corner. 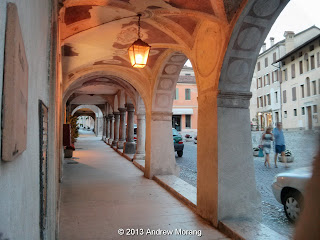 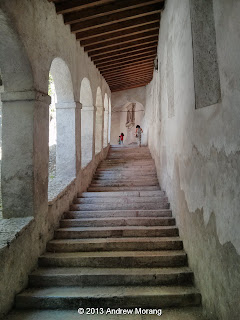 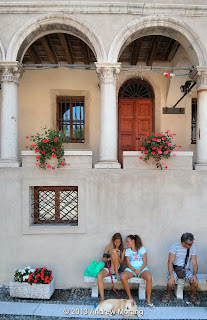 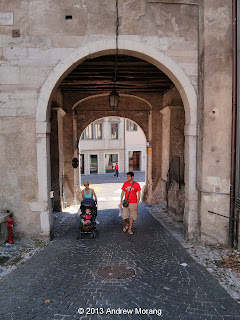 Then there are the arches.  Ancient Italian towns are full of arches. 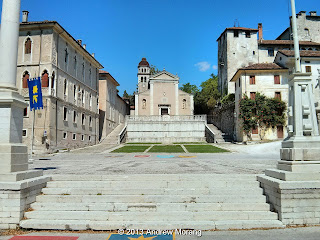 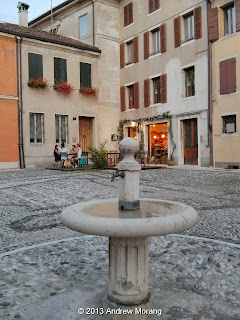 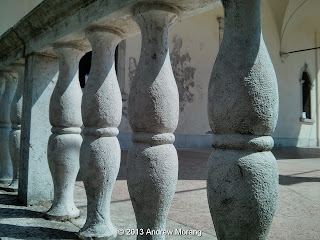 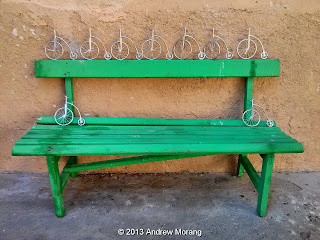 Then the plazas with neat architectural features and art. 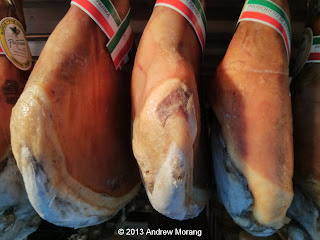 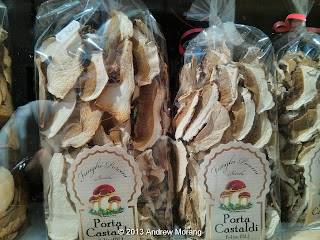 Maybe best of all, like most Italian cities, Feltre is a food town.  These people have used fresh local ingredients for centuries, long before trendy American urbanites "discovered" the local food movement. 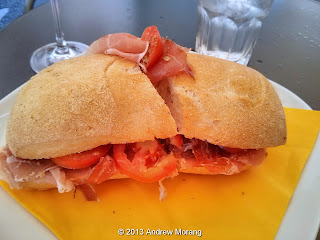 Want a light snack?  How about a sandwich in crusty bread and a glass (or two or three) of local wine?  It doesn't get much better than this. I found prices to be really reasonable and people incredibly hospitable.

An editorial note:  Small towns in Italy, Austria, Germany, France and Spain are clean, neat, and, for the most part, architecturally preserved  Their residents live harmoniously with their past and recycle their buildings.  Why do so many small U.S. towns look shabby, have dirty, pot-holed streets, have ghastly strips consisting of vile, fast-food restaurants and quickly-built steel commercial buildings, and why have they let their architectural heritage decay?  It baffles me.

Photographs taken with a Nexus 4 phone, reprocessed with ACDSee Pro software.  The automatic white balance of the Nexus is often off and needs manual correction.  Also, a fundamental flaw: it does not save a RAW file.
Posted by Kodachromeguy at 22:08 No comments:

Revisit to the Pláka of Athens, Greece

When visiting Athens, one of your first destinations should be the Acropolis and the Pláka District. Compared to the noisy and congested modern city, in the Pláka, you have a sense of village life before the cars and mobile phones and pollution.  To refresh your geography, the Acropolis is the limestone hill on which temples and sacred precincts have existed for 3000 years.  Classical Athens was situated around the Acropolis, and the Pláka is the last remnant of the 1800s village that clung to the slopes before 20th century urban sprawl. 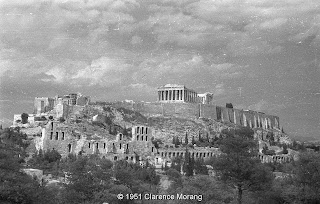 First, here is a 1951 photograph of the Acropolis taken on Kodak Plus-X black and white film. The big temple is the Parthenon. 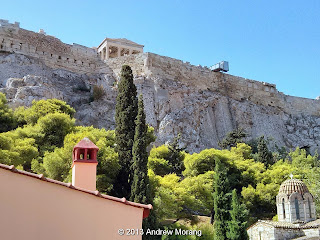 Walk in the Pláka, look up, and the Acropolis looms above you.  History is everywhere. The two photographs above were taken from The University of Athens History Museum. The building is one of the few remaining from before the King Otto era. From 1837 to 1841, it served as the first university of the independent Greek State.  The museum is free, and the building is air conditioned if you need a cool break. 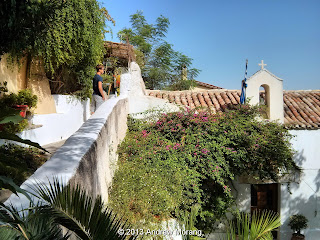 The narrow lanes wind up and down, and are really pleasant. 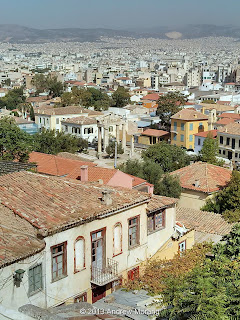 Sadly, look in the distance, and the frenetic, uncontrolled post-World War II urban construction is all too evident.  Thousands of elegant homes, mansions and early 20th century Art Nouveau buildings were demolished and replaced with rapidly-constructed concrete boxes. 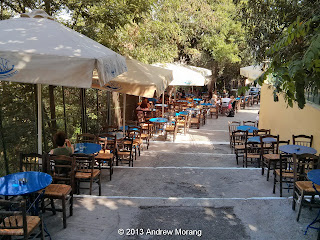 Still, take your time, look around, and stop for a relaxing drink or meal under an umbrella.
Here is the Temple of the Winds, another 1951 scene.  This view does not look very different today. 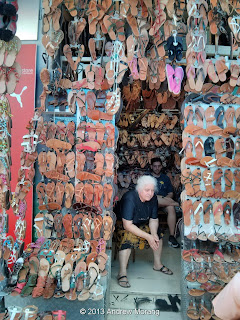 I have written about the flea market in the Monastiraki District before.It is a bit dull compared to the 1950s (see the link) but still worth a visit. 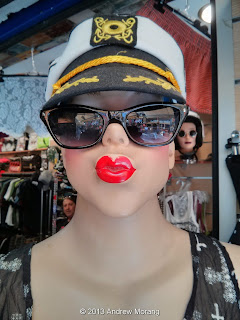 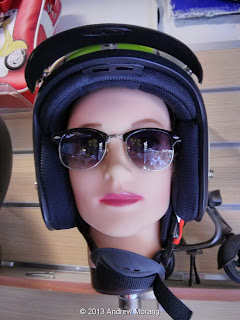 It is definitely worth a visit to see lovelies like these two. 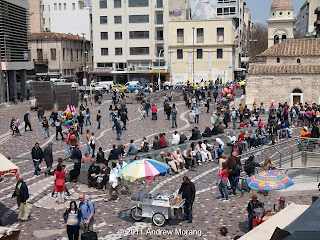 Emerge from the flea market, and you are in Monasteraki Square, now a popular meeting spot with easy access to the Metro. Beware of pick-pockets. 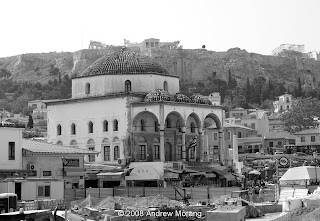 Turn around and look south, and there is the Acropolis dominating the skyline.  The building in the foreground is a former mosque, one of the few remaining from the Ottoman era.

Editorial note:  The US media is full of ominous stories about the terrible state of the Greek economy, strikes, civil disobedience, and general gloom and decay.  The stories may be true to some extent, but as a tourist, you are mostly sheltered. The Greek people are as friendly as ever, the restaurants a bit less expensive than five years ago, the food as good as ever, the wine better, the scenery as magical as ever, and the ladies weigh less than 300 lb. Moral: don't believe the scare stories in the media.

Update, October 2016:  Conditions have deteriorated badly in Athens. In 2015, it looked almost "normal." One year later, the city looks distinctly grungy, as if buildings have not been pressure-washed or painted in years. In rural Greece, trash is everywhere. Street repair is of a much lower standard than before. Graffiti has been sprayed on almost all flat surfaces as well as on busses and trams. The area between Omonia and Monasteraki has a distinctly Middle-East flavor and crime there has increased. I am changing my previous opinion and now recommend tourists not travel to Greece until it can sort out its financial and security issues. It's really sad.

2013 digital images were from July 2013 with a Nexus 4 phone, reprocessed with ACDsee Pro software. The 1951 photographs were from a Canon rangefinder camera (possibly a model IIB) with 50mm ƒ/1.9 Serenar lens.
Posted by Kodachromeguy at 17:48 2 comments: