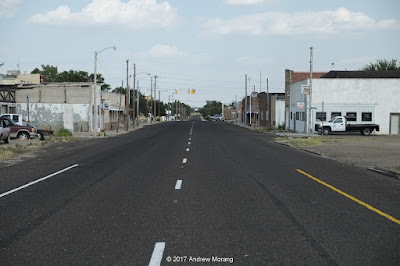 McClean is another now-quiet Route 66 Texas town that is trying to reinvent itself or at least attract more Route 66 voyagers. It looks like so many other small towns in the heartland: a main strip, sturdy square-front shops, of which some are occupied but many empty, an occasional hair/fingernails emporium, and an occasional government entity in one of the storefronts. This could be in Texas, Arkansas, Mississippi, or Oklahoma. 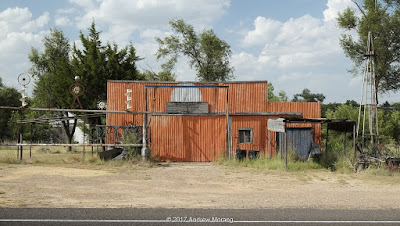 The outskirts of town have some interesting farm sheds, but probably not of interest to the typical Route 66 traveler. 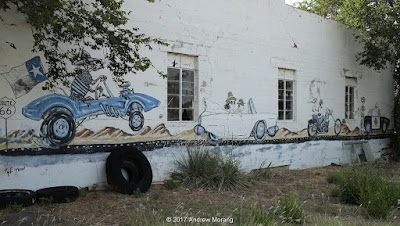 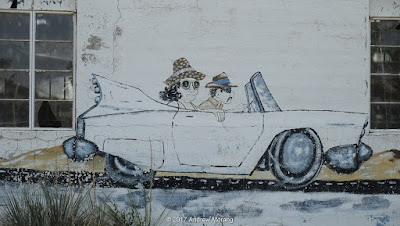 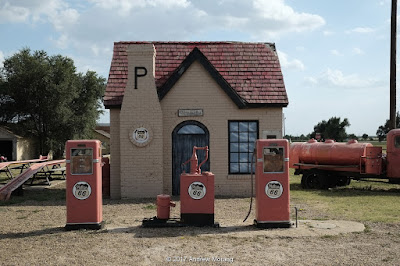 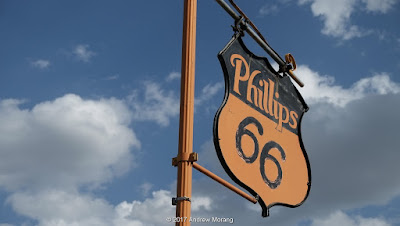 We saw another classic 1920s peaked-roof Phillips 66 station. This one was restored by the Texas Route 66 Association, according to the Route 66 Adventure Handbook ("Turbocharged Fourth Edition"). 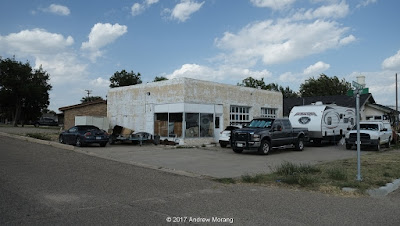 Here is a mid-century gas station, possibly clad with enameled steel panels, although not in the best condition. 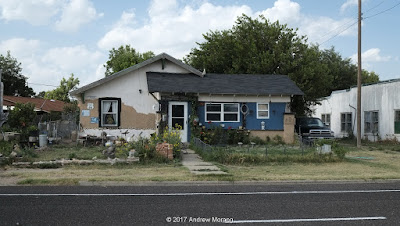 This little house was across the street from the Phillips 66 restored station. The housing stock in McClean was mixed, but mostly rather rough. We only stayed a short while and proceeded on our way on the Mother Road.

Digital images are from a Fujifilm X-E1 camera.

Update: I found a black and white film photograph of the Phillips 66 station from my Olympus Trip 35 camera on Kodak BW400CN film. A polarizer enhanced the clouds. Comments welcome on whether you prefer the color or monochrome versions. 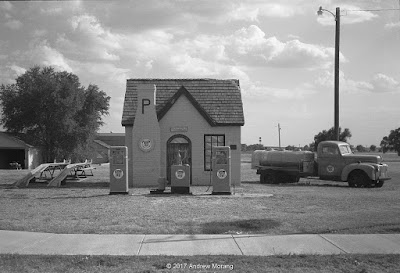 I would like to call your attention to Mr. Pavel Kosenko, a Russian photographer who does some really nice rural decay photography using film cameras: https://pavelkosenko.wordpress.com

His work tempts me to buy a ticket and fly to Murmansk or to other lonely outposts in that vast land. But I will probably go in summer....

Mr. Kosenko also wrote a tutorial on using a digital raw processing software, Raw Photo Processor (RPP). It is sophisticated and runs on Mac computers. The link to his blog will take you to the tutorial.

Email ThisBlogThis!Share to TwitterShare to FacebookShare to Pinterest
Labels: Russia 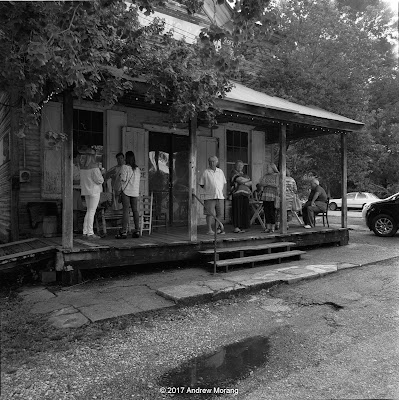 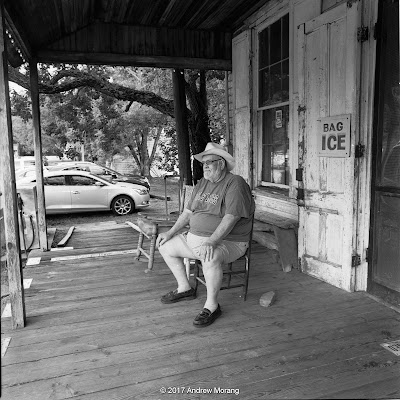 Gibbes&Sons is a venerable country store, in business since 1899, in Learned, Mississippi. During the week, the store sells souvenirs and munchies. But on Friday and Saturday evening, it hosts steak dinners. And it is popular - what a great way to reinvent! The gent in the second photograph said I was welcome to take a picture - I wish I had written down his name. 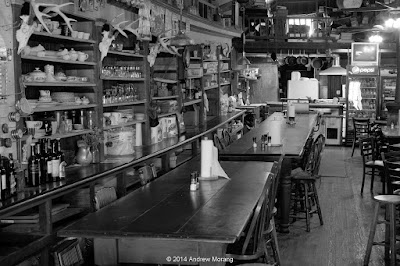 It features country-style dining. Share a table and bring your own wine or beer. The proprietors will provide glasses. Wipe your fingers with paper towels. My friends and I ate on the back porch, which was reasonably comfortable despite the humidity. 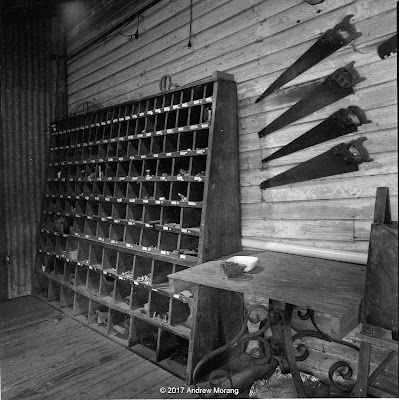 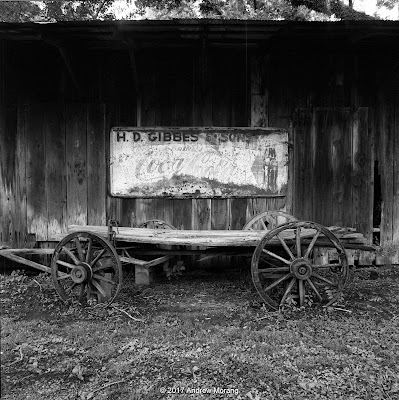 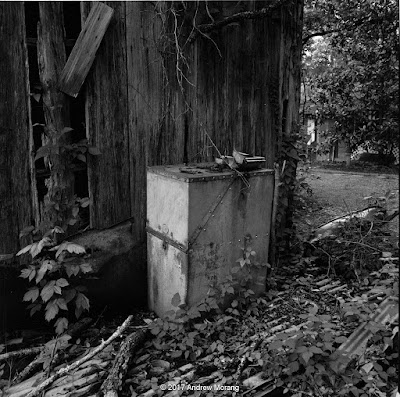 The back yard has some interesting sheds and bits and pieces from the old days. I did not see these when I visited the shop mid-week in 2014, so it was well worthwhile to eat out on the back porch. While my friends chatted, I walked around with the Hasselblad and tripod. 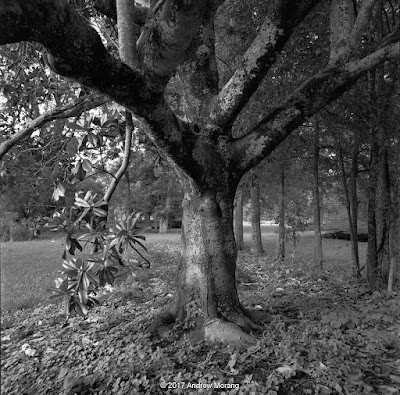 Back out on Main Street, there are a number of old buildings and one interesting Magnolia tree outlined by the fading light (I warned you readers that I would be taking more "pretty" pictures in the future). 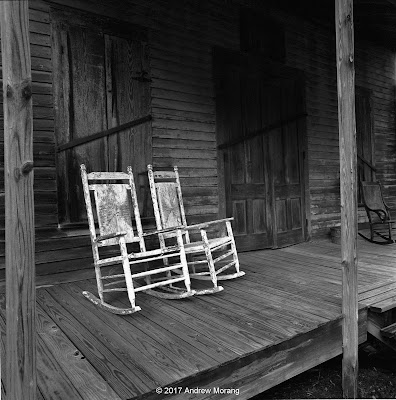 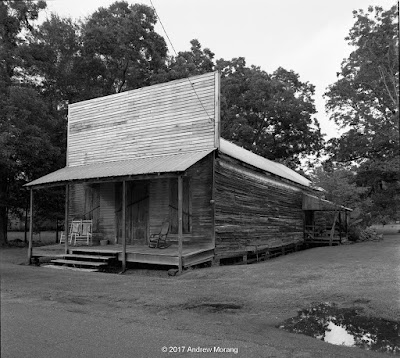 This former country store sits at the corner of Main and Front Streets. I do not know if the building is used today or is just part of the ambience of Learned. It is a nice town and I recommend a visit. Go eat a steak.

The square photographs are from TMax 400 film, taken with a Hasselblad 501CM camera and the 50mm f/4.0 Distagon lens. I had not used 120-size TMax before and was testing a roll. I exposed it at EI=320. The frames from dark locations were underexposed, and I think this film suffers reciprocity failure as low as 1/2 second. TMax is one of the new technology films introduced in the 1980s with so-called tabular silver grains (similar to Ilford's Delta films). The TMax is remarkably fine grain, but I think I prefer Tri-X 400's tonality. Tri-X is more grainy, but with a 54×54mm negative, grain really is not an issue. I scanned the negatives on a Minolta Scan Multi medium format film scanner operated with Silverfast Ai software.
Posted by Kodachromeguy at 08:00 No comments:

Amarillo is the "big city" in west Texas. Heading west, it was the largest town that a Route 66 tourist drove through until he reached Albuquerque. Heading east, Oklahoma City was the next major metropolis. Today, Amarillo is a busy city with a lot of construction and renovation, thanks to oil money. It is a bit difficult to see much of the old Route 66 because it followed city streets, which have new or modified buildings over the decades.

Coming in from the west, I think Route 66 followed what is now W. Amarillo Boulevard, which is also Business 40. Amarillo Blvd. is a bit seedy (all right, very seedy), and most Route 66 structures have been recycled or greatly modified. 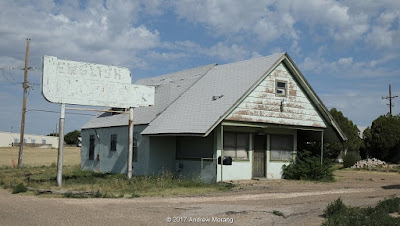 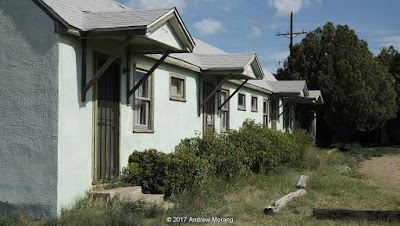 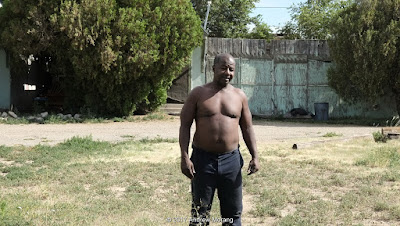 The English Motel is one of the few Route 66 remnants. It is just north of Amarillo Lake, at the junction of NW 9th Ave and N. Lipscomb St. The place looked mostly abandoned, but I met this gent in the photograph above, who said he lived in one of the units. He was the caretaker and  made sure no one vandalized the site. 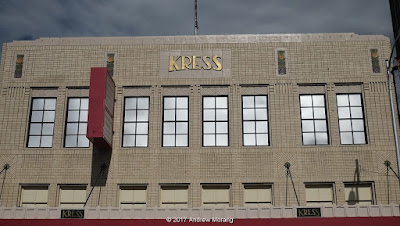 Downtown on Polk Avenue, I was pleased to see historic buildings being restored. For example, this Kress store, with its distinctive architecture, was in beautiful condition. S.H. Kress & Co. operated five and dime department stores throughout the United States from 1896 to 1981. The Kress chain was known for its architecture, which often included Art Deco motifs and the exuberant use of terra cotta tiles, curved glass, and stone floors - high end features intended to make the shopper comfortable and linger (for white shoppers, not African-Americans). 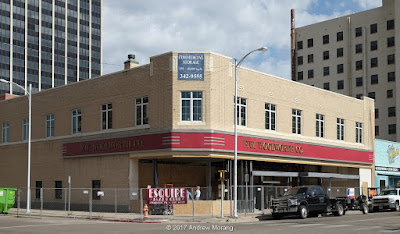 The former Woolworth store on Polk Avenue is also being restored. The F. W. Woolworth Company (also known as Woolworth's or Woolworth) was one of America's most successful retail companies in the early 20th century, one of the original pioneers of the five-and-dime store. Woolworth's thrived until the 1970s, when it began a rapid decline. The rise and fall of these retailing empires is a fascinating social and economic history. None seem to last more than about a century or maybe 150 years (examples include Sears & Roebuck, S.H. Kress, S.S. Kresge Company, The Great Atlantic & Pacific Tea Company, and Montgomery Ward). WalMart is about 50 years old; could it already be half way through its era of marketing dominance? (WalMart certainly will not leave behind an architectural heritage of any value.) 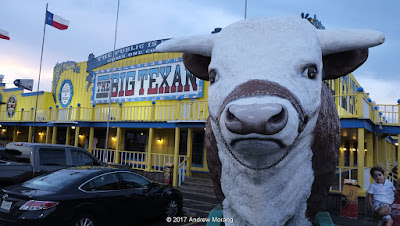 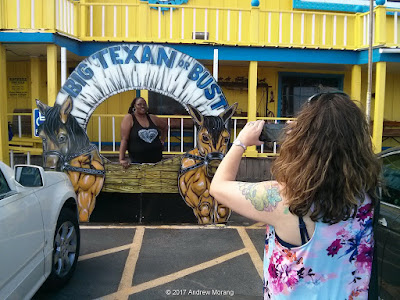 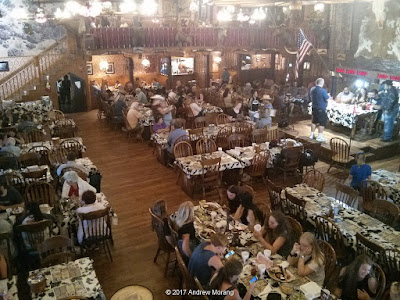 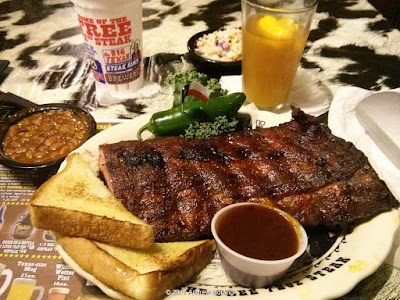 When you drive through Amarillo and are feeling carnivorous, the Big Texan Steak Ranch & Brewery is a mandatory stop. Big Texan served Route 66 travelers but in recent years relocated nearer I-40. Now it is at 7701 Interstate 40 Access Rd. Texan is famous for a 72-ounce steak which is free if you can devour it within an hour. The evening we were there, a video crew was filming a fellow on his gastronomic marathon with the steak (see the bright lights in the interior scene above). Oddly, when I mentioned this to a coworker, he told me that his brother took up the challenge and ate the steak in the obligatory hour. And my friend and his brother are not big people by any means. Amazing. My ribs were some of the best I have eaten in years.

After digesting our ribs, we will continue east on the Mother Road. To be continued....
Posted by Kodachromeguy at 08:00 No comments:

Only a couple of hours south of the Washington, DC, urban sprawl (mess) is a gentle and historic land of farms, forests, and tidal rivers. The western shore of Chesapeake Bay is indented with rivers that separate three peninsulas, locally known as "necks." The Northern Neck is the northernmost of these three peninsulas, while the next two to the south are the Middle Peninsula and the Virginia Peninsula. Northern Neck is bounded by the Potomac River on the north and the Rappahannock River on the south.

The first European to see Northern Neck may have been Captain John Smith. In the winter of 1607–1608, he traveled up the Rappahannock River while a prisoner of the Powhatan tribe. The neck was settled by English settlers in the early 1600s. The land was well-watered and the winters mild compared to New England, leading to prosperous tobacco farms. African slaves were imported to provide labor for the farms. In the 19th century, the land gradually shifted to mixed grain and vegetable farming as well as timber and seafood. Today, vineyards and wine-tasting are a big business.

Although farming persists, the coasts have been developed with vacation (or year-round) homes for wealthy urbanites. I saw clusters of pretentious McMansions on the bluffs overlooking the Rappahannock River. But inland, there is still a feeling of a land that time forgot. Hundred-year-old farm houses, country stores, and small towns look sleepy. It is surprising considering that Washington is only two hours north (or 3 or 4 hours when the traffic is backed up).
My wife and I drove to Farnham, near Warsaw, Virginia, to visit relatives in May of 2018. I explored a bit, and, of course, wish I had more time to check out-of-the way towns and farms. (Click any picture below or the map to enlarge it.)
I was surprised to see a large number of traditional farmhouses abandoned, often being engulfed with vegetation. Where did the former residents go?
The little town of Lively looked reasonably prosperous but had a number of old stores and buildings in various stages of abandonment of neglect.
The Farnham Garage - this was fun. The owner had a fantastic collection of older European cars and a few examples of Detroit iron. Some were in running condition, other were a bit "rough." He said he had driven all of them to the garage, but that may have been some years ago.
Some abandoned silos and the remains of a loading dock are at Totuskey Creek, just east of Warsaw on History Land Highway. More examples of industrial infrastructure are likely tucked away in the woods.

These photographs were taken on Fuji Pro400H film, a 20-year-old roll that had been in my freezer. I exposed it in a Rolleiflex 3.5E with 75mm f/3.5 Xenotar lens, with a Leitz polarizing filter on many frames. I used a Sekonic 318B light meter set at EI=320. I scanned the negatives with a Minolta Scan Multi film scanner operated with SilverFast Ai software.
Posted by Kodachromeguy at 08:00 2 comments: