The State of North Carolina has a network of scenic byways that cover many of the historic and scenic parts of the state. If you go to the Department of Transport web page, you can download a book of the byways and look at an interactive map. You can also request a printed copy of the book.

The screen capture above is the online map on the NC-DOT web page. The blue line in the west is the Blue Ridge Parkway. Long-term readers may remember that I have driven much of the Parkway in 2017 and 2018. I have also driven the Nantahala and Fontana (Rte. 28) Byways. It is beautiful terrain in the west.

For the urban decay photographer, the state is a treasure trove of old farmhouses, mills, factories, and quiet little towns that look like time passed by. 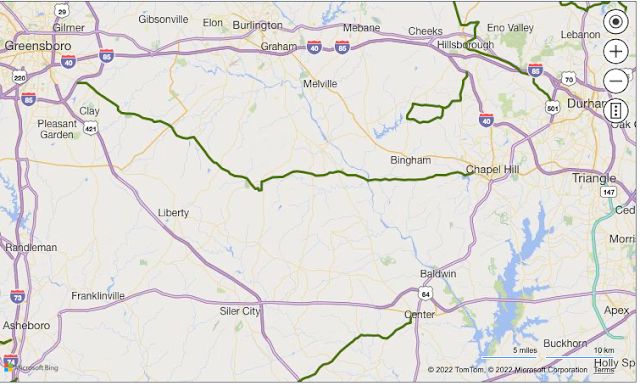 The DOT calls the route between Chapel Hill and the outskirts of Greensboro the Football Road. I do not know why it has this name. But it goes through nice farm country and avoids the boring Interstate 40. Part of it is Old Greensboro Road and then becomes the Old Greensboro-Chapel Hill Road.
The Greensboro-Chapel Hill Road winds its way past farms and woods. An occasional car or tractor passes by. I was surprised that many of the silos consist of concrete tubes reinforced with exterior steel bands. It is a cylindrical version of a barrel.

The Snow Camp Outdoor Theatre is at 301 Drama Rd. (great name!) in Snow Camp. The site was empty when I visited in October, but in-season, the semi-professional company has been presenting plays for over 40 years. The restaurant next door will not be providing any meals for a long time.....
This ends our short excursion on the Football Road in central North Carolina. The time was late and I had to return to Chapel Hill.
These photographs are all on Kodak BW400CN film from my little Leica IIIC camera. I used my 5cm ƒ/2 Summitar and 50mm ƒ/2 Jupiter-8 lenses, often with a yellow filter to enhance clouds.
Posted by Kodachromeguy at 07:30 4 comments: 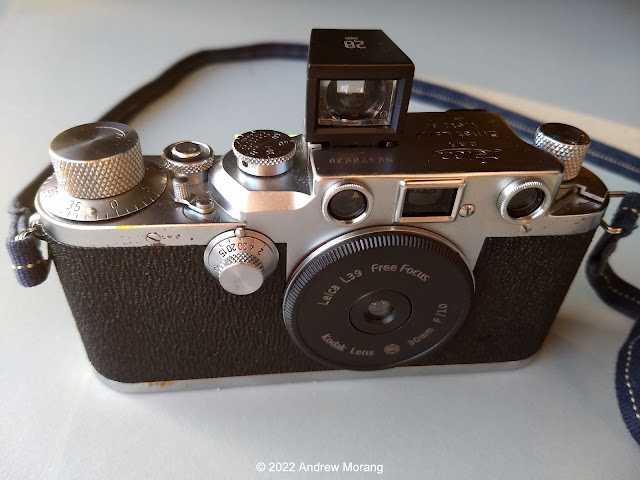 Some clever entrepreneurs in China have introduced an inexpensive lens for Leica thread mount cameras: a plastic housing containing a Kodak 30mm ƒ/10 lens from a disposable (i.e., one-use) camera. They must have removed the lens units from the Kodak KB32 camera (or sourced brand new ones) and remounted them in 39mm, Leica M, and several other plastic mounts. The lens has no aperture control and it is fixed focus. In other words, you must use it at ƒ/10 and hope that depth of field will cover the focus of anything in your scene.

Some of these little lenses for disposable cameras are rather sophisticated and consist of aspherical units molded out of some plastic. Up through the 1990s, aspherical glass surfaces were very expensive to make because of the super-precise grinding that was necessary. But modern molding machines made cheap one-use cameras with reasonably good optical output possible. They were not discarded. After the lab processed the customer's film, the factory (or a contractor) loaded the body with fresh film for a new customer.
Here are some examples from my Leica IIIC camera on Fuji Acros 100. On film, it is optically fair. Mine is uneven left to right. But it makes interesting B&W shots of the type of grubby stuff that I photograph. Best focus may be about 2 - 3m from the camera. It works best to crop a couple of mm from the edges of each frame. Oops item: finger in some frames. When using this 30mm hack lens, I will need to hold my Leica IIIC without wrapping my hand around the front.
Mounted on my digital Fuji X-E1 camera, the Kodak lens has rather poor contrast and does not handle flare well. In the example below, I added contrast and sharpened significantly.
Summary. Not too good optically, but compact and well worth packing in the camera bag. Works well with gritty topics.
Posted by Kodachromeguy at 08:00 4 comments:

New Bedford is a historic seaport, whaling town, and industrial city facing Buzzards Bay on the south coast of Massachusetts.

According to Wikipedia, New Bedford was once known as "The Whaling City" because it was one of the world's most important whaling ports in the late-eighteenth and nineteenth centuries. Whaling declined after the 1860s when petroleum was discovered in Pennsylvania and as overfishing almost eradicated whale populations around the world's oceans.

In the midst of this decline, greater New Bedford's economy became more dependent on the textile industry, which began to eclipse the whaling industry in the late 19th century. The mills grew and expanded constantly, eventually comprising multiple sites along the Acushnet River. In 1875 alone, the Wamsutta Mills processed 19,000 bales of cotton into 20 million yards of cloth, which had a wholesale value comparable to that of the entire whaling catch, and continued to produce over 20 million yards of cloth yearly after 1883. The Wamsutta Mills remained the world's largest weaving plant until 1892.

My wife and I briefly visited New Bedford in late 2021 and looked at some of the monumental mill buildings. Many are empty now, but some have new uses, including residential. The New Bedford Economic Development Council prepared a City of New Bedford Historic Mill Inventory in 2008. You need to walk around some of the structures to see what huge businesses these must have once housed and image how many thousands of workers once toiled inside. We have seen similar huge brick mill buildings in Lewiston, Maine, in 2003 and Łódź, Poland, in 2016 (in a pre-Covid life).

Clark's Cove is on the west side of the city, with Rodney French Boulevard running along the shore. We stopped at a driveway leading into a mill complex at 89 Rodney French. The gate was open and no one was around. I could not find a name of the complex or the name of the former milling company. The 2008 inventory does not list the original companies that operated these mills. 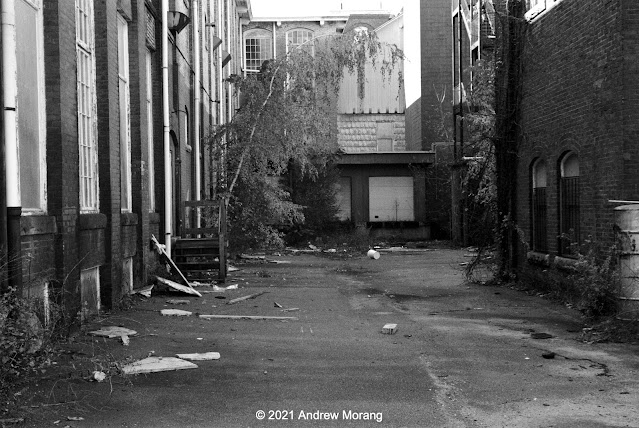 The Globe Furniture Company occupies part of the ground floor facing Rodney French. But most of the hulking complex appeared to be empty. The doors were secured and I could not go inside, but did not have enough time to look everywhere. 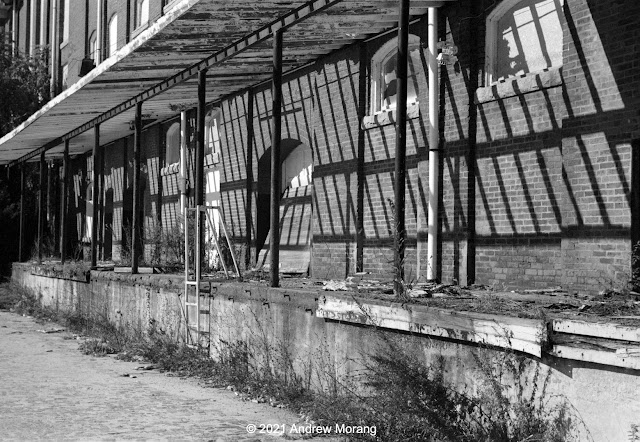 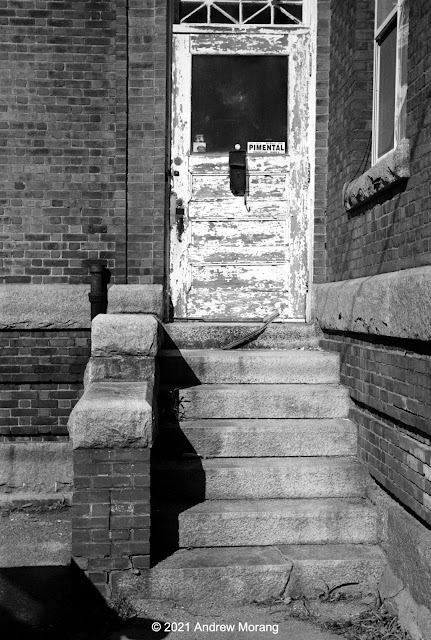 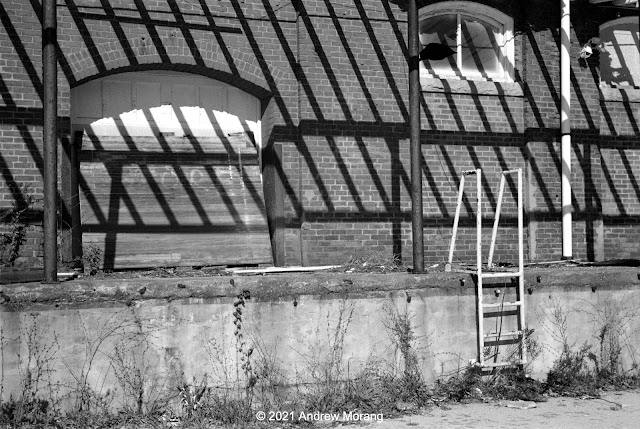 The patterns of light and shadow were especially interesting in the harsh sunlight. I hope I can return with a 4×5" camera some day. 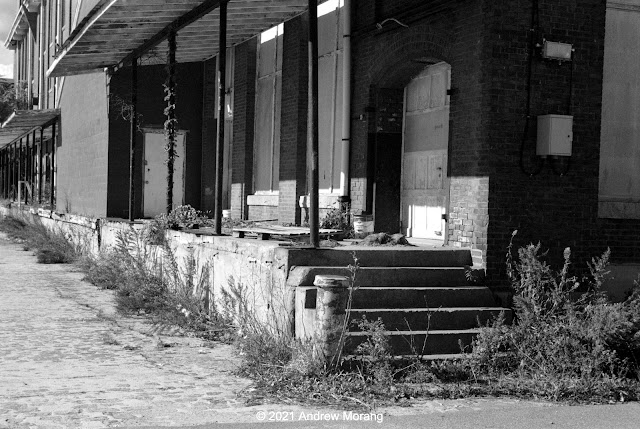 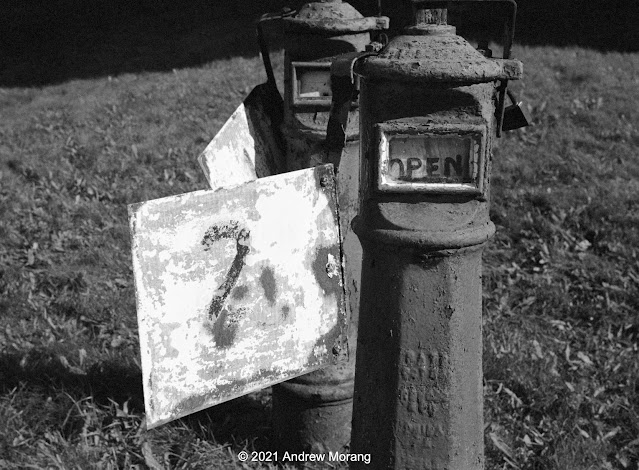 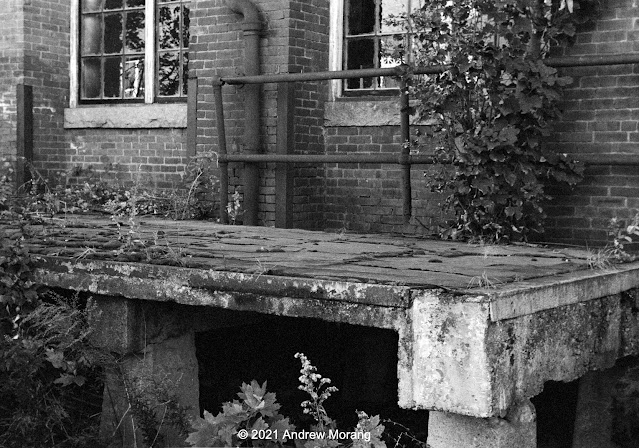 Details, patters, shapes, textures - no end to interesting photographic topics.
Another topic for a future visit is the worker housing that the cotton companies erected near the factories. The morning steam whistle would blow, and the factory workers walked to work.
I took the 2021 photographs on Kodak BW400CN film with my Leica IIIC rangefinder camera and the 5cm ƒ/2 Summitar lens.
Posted by Kodachromeguy at 07:30 1 comment:

The City of Crystal Springs is about 20 minutes south of Jackson along Interstate 55. Most people rush by on the interstate, but it is a pleasant community and worth a stop. It looks more prosperous than many other Mississippi towns that I have visited. The city was formed in 1858 when the New Orleans, Jackson and Great Northern Railroad built facilities in the area. Copiah county was known as the "Tomato Capital of the World" because in the late 1930s, the county canned and shipped via rail car more tomatoes than any other county (anywhere in the USA?). You can even attend the Tomato Festival in June.

I am not sure exactly where the 1920 photograph was taken, but a traveler getting off the train in Crystal Springs may have stayed in the Wolf Hotel. Most towns had a businessman's hotel of this type convenient to the depot. Many (most?) European towns also have Bahnhof hotels, many of which are still in use. I have stayed in many of them over the years.
I talked to some old-timers at the Pawn Shop in the ground floor. They said the upstairs was a mess and they were slowly restoring it. I would have enjoyed exploring, but possibly the floors are not sound. Next trip...
I saw an old corrugated steel warehouse on East Railroad Avenue. Was it once for tomatoes or lumber? Most of it was not photogenic, but I liked the door and steps. An abandoned car repair shop on East Railroad Avenue was also had an interesting door.

Obviously, this has been a cursory look at Crystal Springs. I will revisit soon.

Continue south a few miles and you reach the small town of Hazelhurst. This is another Copiah County  town whose development was stimulated by construction of the railroad in the 1860s. Again, a bridge across the tracks provided a good viewpoint for a photograph. Some of the commercial buildings in town have been converted into apartments and stores. 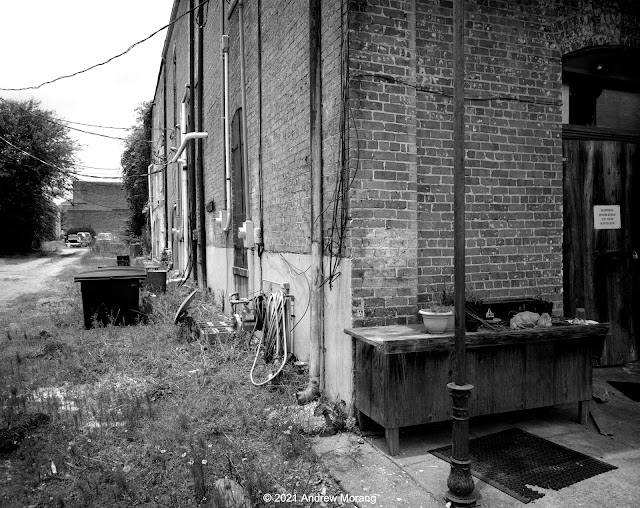 Hazelhurst is also a cheerful little town. The big lumber (or tomato?) warehouse next to the tracks was empty, but the commercial stores in town were mostly in use. 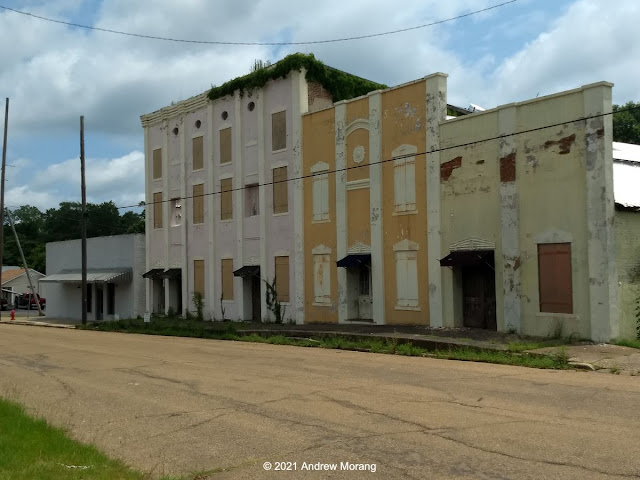 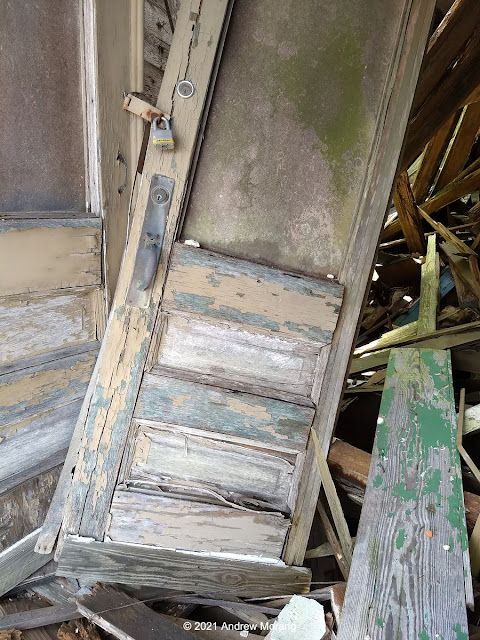 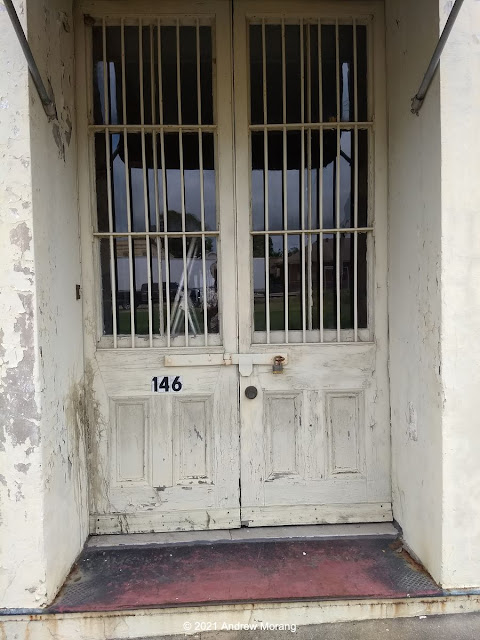 A block of old stores on Georgetown Street faces the railroad tracks. These buildings ones have definitely seen better days. The stucco facade is unusual, possibly a renovation some decades ago? 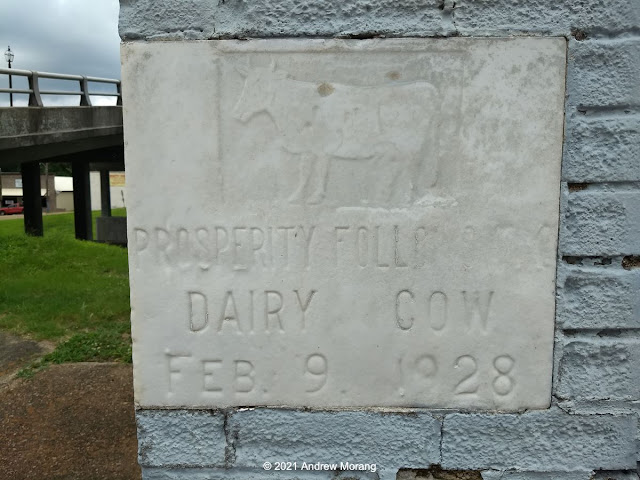 A cow cornerstone! You see some interesting features in small towns.
We will explore some more Mississippi towns in future updates. Thank you for riding along.

The Mississippi Delta 38: Spring in the Delta, Belzoni Area

In Spring of 2021, we were restless. Other than day trips, we had been nowhere. The Pandemic was raging and the vaccines had just been introduced. Why not take a short outing to the Mississippi Delta? Pack a lunch, drinks, and a carafe of coffee, and we would not need to go into any stores or restaurants. I loaded my Hasselblad with the long-discontinued Kodak Panatomic-X film and we were off. 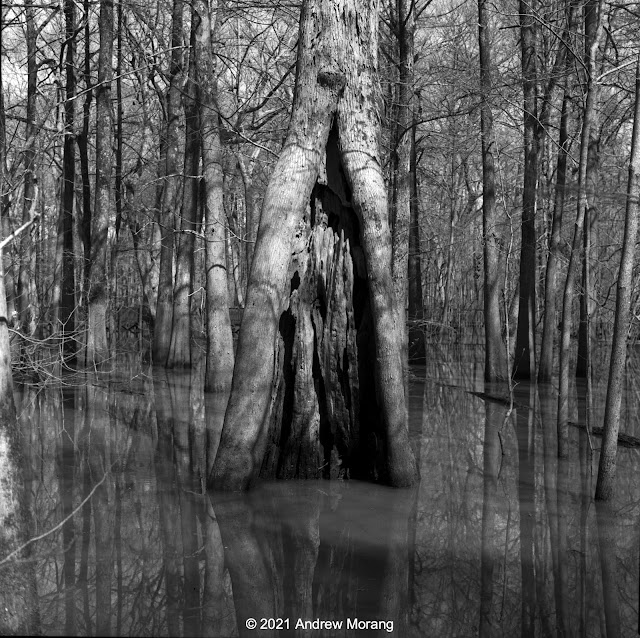 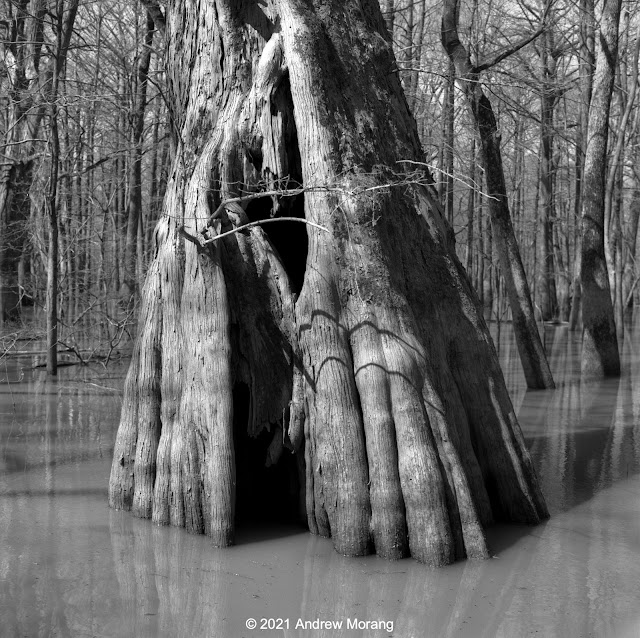 Sky Lake Wildlife Management Area is a fascinating wetland containing huge ancient cypress trees, which fortunately were saved from logging. The WMA is located in Humphreys and Leflore Counties a short distance north of Belzoni. A boardwalk lets you walk out into the forest. The woods were flooded, as you can see in the photographs above.
I have visited Belzoni in 2020 and earlier, but did not make it to the Sky Lake WMA. 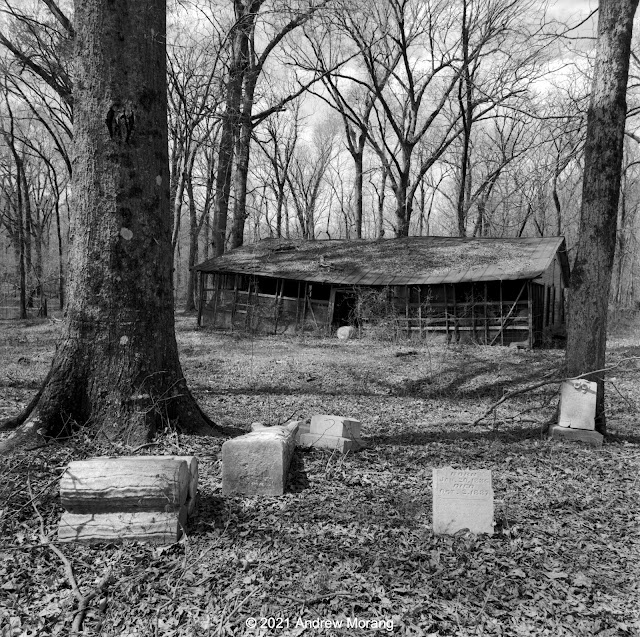 There are farms and a few homes near the WMA. This old graveyard and barn was on Lake Road.
On the way home, we took Old Hwy. 49 south past Silver City and Midnight (see my 2020 article).
We drove south on Old Hwy. 48 into Midnight. Silver Creek winds its way through the central Delta and through town. A railroad once served Midnight; a trestle over the creek is one of the few remains. 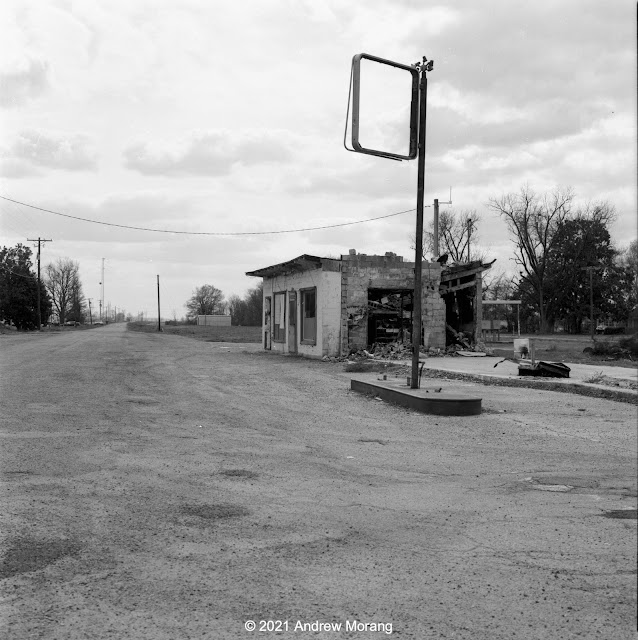 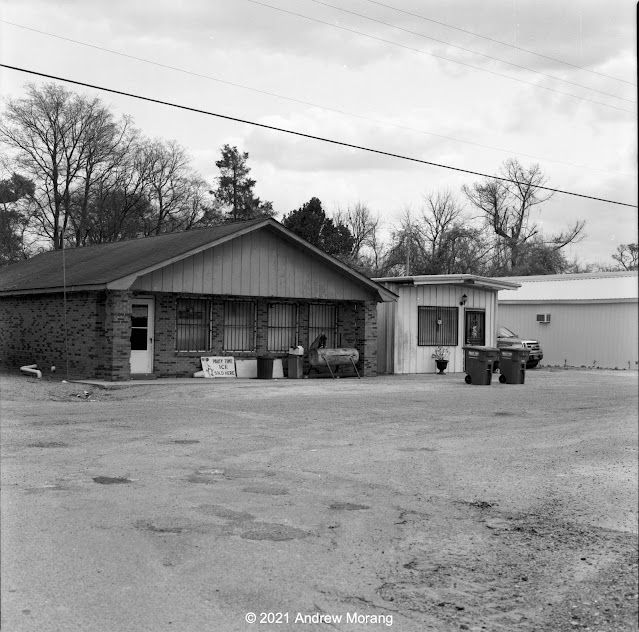 There not much left to the town. A crumbling gas station and a small store/juke joint are about it.

This is a photograph I took in 2020 of a farm workers' hut behind the main house at Box Plantation.
This ends out very short spring visit to the Delta. For more photograph of the Mississippi Delta, type the term in the search box. Thanks for riding along.
Posted by Kodachromeguy at 12:43 4 comments: