On the Blue Ridge Parkway in North Carolina

The Blue Ridge Parkway, stretching from Cherokee, North Carolina, to Afton, Virginia, is one of the great scenic drives of the world. It winds up and down through the Smokies, passing the higher points of the mountains and bypassing most urban areas. The scenery is sublime, especially in autumn, when the leaves are a brilliant feast for the eyes.

I took most of these photographs in May of 2017 en route to The Vintage car show, held annually in the Asheville area. The weather was perfect for photography with drizzle and low clouds. I could not resist. I have warned you long-term readers before that you will gradually see more "pretty" pictures here. So, no urban decay this time, just nature. These photographs are oriented from west to east, starting a short distance east of the western terminus of the Parkway. We will proceed to a few miles northeast of Asheville.

This mellow overlook is just east of Balsam Gap, through which US 74 and 23, the Great Smoky Mountains Expressway, passes. 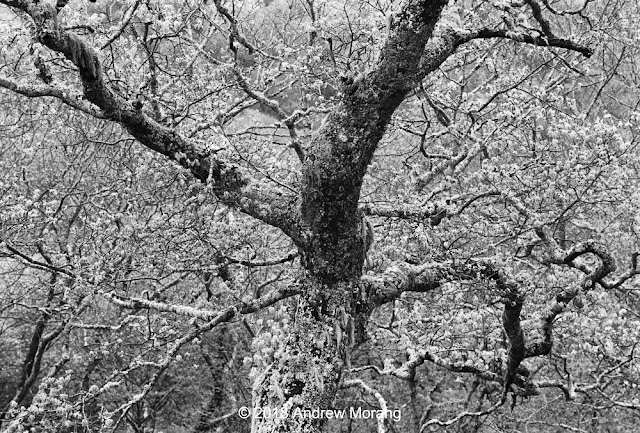 During both 2017 and 2018, the weather became more misty and wet as I ascended from Balsam Gap. Both years had perfect soft lighting with just enough contrast to sculpt the trees and lichens.
In 2017, by the time I reached the highest spot on the Parkway, the weather had closed in and sleet was falling. Surprisingly, my old car does very well on these hills despite its little 1800cc engine.
The Pisgah Campground and Pisgah Inn are on a ridge with expansive mountain and valley views to the south and north (except when it is fogged in, which may be common). I had planned to drive here and stay at the inn in 2020 en route to The Vintage, but the Trump Virus ruined our plans. The Inn and Campground are cool in the hottest summer days.
Heading east towards Asheville, Chestnut Cove Overlook is down to 2180 ft elevation.
Walnut Cove Overlook is only a few miles from Asheville, and the land off the Parkway is being developed with McCabins for the wealthy set. At least the developers have not clear-cut the timber.
The North Carolina Arboretum is a treasure of plant diversity, with trails and waterways. It is within the Bent Creek Experimental Forest just south of Asheville and adjacent to the Blue Ridge Parkway at Milepost 393.
The Parkway passes south of Asheville before turning north and crossing I-40. In 2018, I wrote about the River Arts District of Asheville and the rural decay en route to Hot Springs. Asheville has become a serious foodie and coffee place, well worth a visit.
Once you cross I-40, the Blue Ridge Parkway begins to twist and turn and ascend. The Green Knob Overlook is a short distance east of the turnoff for Mt. Mitchell, a worthwhile diversion. In 2017, sleet was falling up at the visitor overlook.
I took the wrong turnoff and plunged downhill on Curtis Creek Road. It was dirt and very muddy, but fortunately I did not get stuck (gravity helped; going uphill would have been impossible in my little 2-wheel-drive car). The road headed down through the Pisgah National Forest. This handsome old mill caught my eye. Finally I reached paved road and found an onramp to I-40 at Old Fort.
I met Catfish John at the rest stop on Interstate 40. I admired his big old Chevrolet Caprice station wagon. He said he had several and restored them. I wish I had a beard like his as well as one of these wagons.
This ends our short tour on the southwestern part of the Blue Ridge Parkway. It is a fantastic road trip, but rather slow going, especially if you encounter RVs trudging along. Summer is quite crowded, so go on one of the shoulder seasons. During mid-winter, snow forces the Park Service to close parts of the road. These are film photographs, most from 120-size Kodak Tri-X 400 and Foma Fomapan 100 Classic film.
Posted by Kodachromeguy at 08:00