This is a three-part experiment: a new film, a commercial laboratory I had not tried before, and new scanner software (I know, I know, too many degrees of freedom).

Experiment 1: A few months ago, I read some highly positive reviews of Adox CHS 100 film, a classical fine-grain black and white film. While in Berlin last September, I stopped at Fotoimpex (a real film store) to buy some, but they were out of stock. The sales agent suggested I try Fomapan 100 Classic, a similar film made in the Czech Republic. Fomapan was established in 1921, so it has a long history of making sensitized materials for the photographic industry.

In December here in Vicksburg, during some overcast days with soft light, I tried a couple of rolls of the Fomapan in my big Fuji GW690II camera (this is a medium format rangefinder camera that takes eight 6×9 frames on a roll of 120 film). I like days with soft light when an exposure will reveal details in the shadows, such as under porch roofs. My usual practice is to overexpose and underdevelop to soften the contrast, so I exposed the Fomapan at EI (exposure index) 64.

Experiment 2: I did not have time to develop the film at home, so I sent it to Praus Productions in Rochester, New York. Praus developed the film in Xtol developer at N-1 (pull one stop), as I specified. The negatives looked pretty good, a bit dense but with full exposure range. Next time I will try EI 80 or 100 to just slightly reduce exposure.

Experiment 3. The Minolta scanning software that came with my "antique" Minolta Scan Multi scanner was pretty kludgy and was low resolution on a modern big monitor. Surprisingly, the German company Lasersoft Imaging still sells a version of their Silverfast Ai software for the Scan Multi. I thought the price was outrageous, but a Christmas 25% sale made it a bit more palatable, so I bought a license for Ai. It runs on my Windows 7 computer and correctly controls the scanner. Result: major improvement over the Minolta software with far more options for film profiles. Note: many photographers use Vuscan software, but I could never get it to work.
Results: Well, I am pleased. These are beautiful full-tone negatives. They have similar grain to Kodak Tri-X, which this reinforces the classical B&W look (which can't be simulated with software). The photograph above of Zollinger's Hill Road almost looks like the bushes are covered with frost, sort of a hidden garden. Click any picture to enlarge it and see the texture. 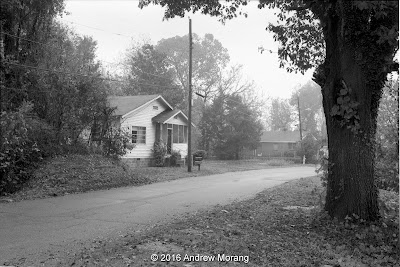 This is Marcus Street near where it intersects Confederate Avenue. The house is no. 1620. This was a 1/2 sec exposure at f/22, with fill flash to add some light on the tree trunk. 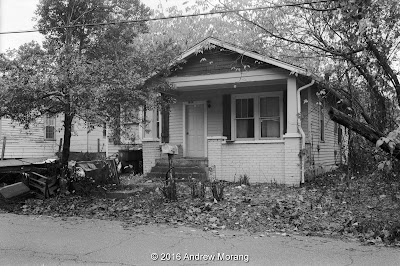 This cottage at 1630 Marcus Street is empty. 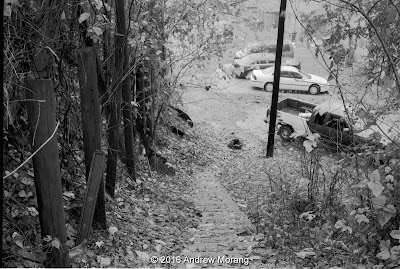 These steps are next to 1630 and lead down to Ethel Street. During summer, the jungle mostly engulfs the steps. 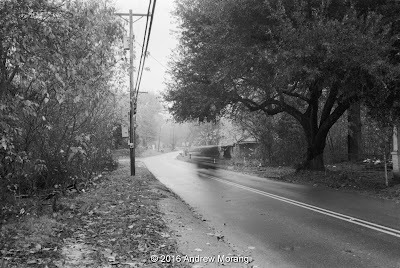 Martin Luther King, Jr., Blvd. is the former Openwood Street, leading from downtown east to the Vicksburg Military National Park. It is one of Vicksburg's older streets and is lined with historic cottages. 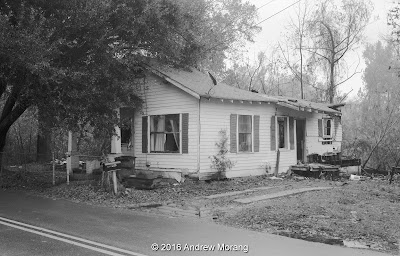 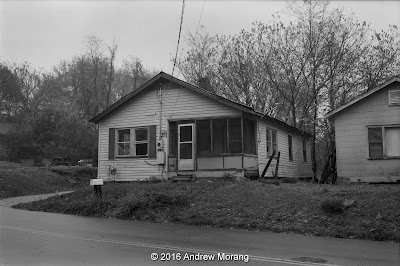 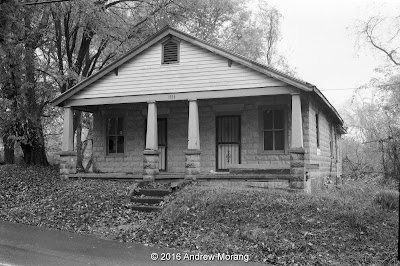 No. 1832 is a duplex partly sheathed with the concrete material shaped to look like limestone blocks.

In the future, you will see more examples of this Fomapan film as well as the ever-dependable Kodak Tri-X. In the USA, you can order Foma products from Freestyle Photographic Supplies in Los Angeles. Support companies that sell film, and take pictures with film. Really, it will make you a better photographer.