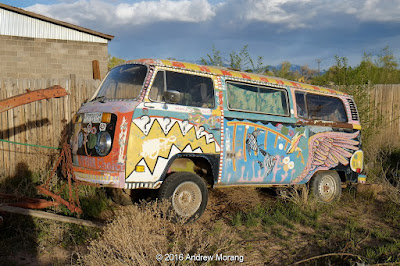 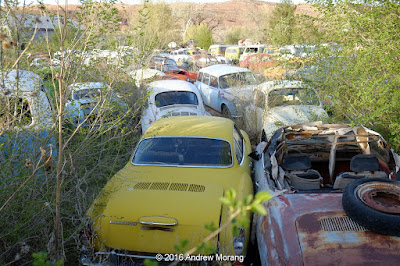 Dear Readers, I found another Volkswagen disposal (junk) yard. This one is in Moab, Utah, off Spanish Valley Drive. The official address is Tom Tom Foreign Car Parts and Service at 1809 E. Mill Creek Drive, Moab, UT. An energetic Tom Arnold ran an active recycling business for Volkswagen collectors, but he passed away some time ago, and now his collection of 200 or 300 bodies sits in his lot. Tom considered this his man cave, according to a 2009 article in Moab Happenings. A lady I met in Moab knew his son and secured permission for me to walk around and take photographs (small towns are great because usually someone knows the right person to contact about almost anything). 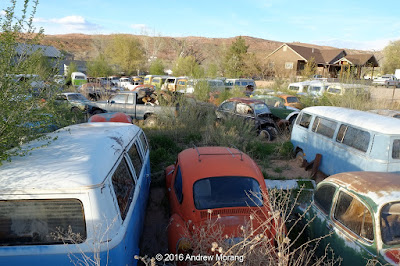 Needless to say, there is a lot of inventory here - buses, Beetles of various ages, Karmann Ghias, and Squarebacks. 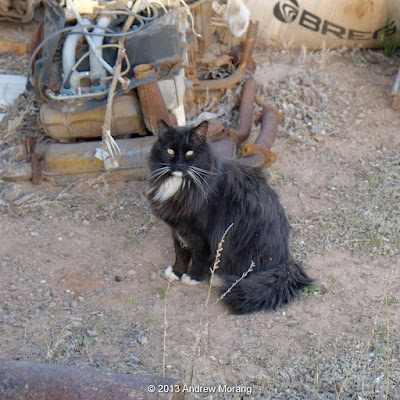 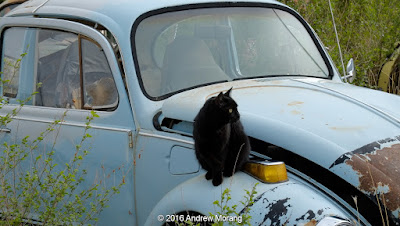 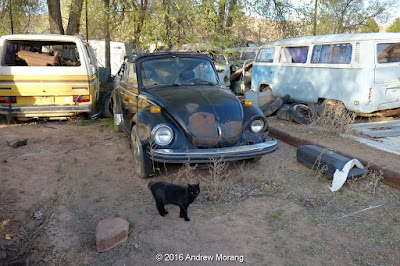 I was concerned, was there a watch dog? No, even better: there were watch cats. These two were on perpetual rodent control and cuddle duty. 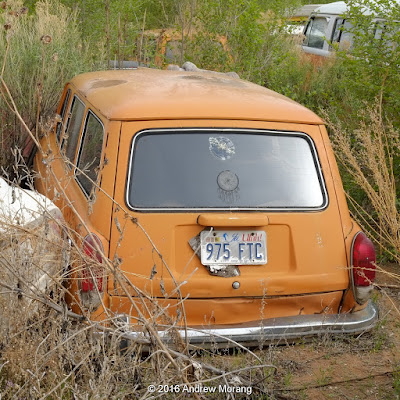 This was the Volkswagen Type 3, known as the Squareback in the US market. These were handy little station wagons with much more interior room than the Beetle. I had a 1965 model in college. When camping, I could sleep in the back at an angle or straight front and back with the hatch open. You can't do that in most of the absurd modern crossover/SUV play trucklets that the suburban "adventure" set drives to the mall. With the rear engine over the drive wheels, that Squareback could go up muddy logging roads or snowy passes in the Cascades. 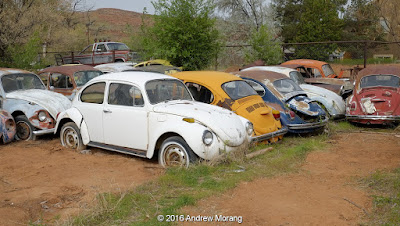 There are at least a hundred Beetles in Tom's lot. I did not see any older split rear window models, but some may have been present somewhere. At least here in Utah, rust is not a problem. 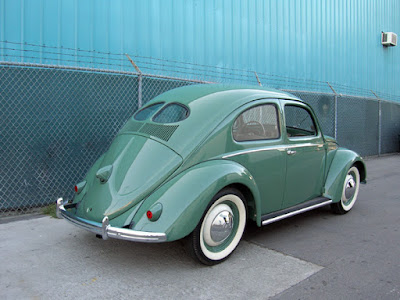 This is a 1949 Type 1 split-window model, from Wikipedia Commons (public domain). These are collectors' items now. 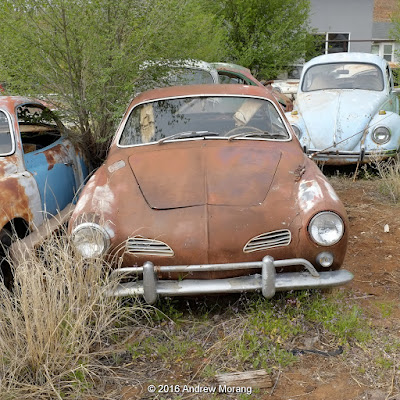 The Karmann Ghia was based on the mechanical underpinning of the Type 1. These were nice little sports cars. 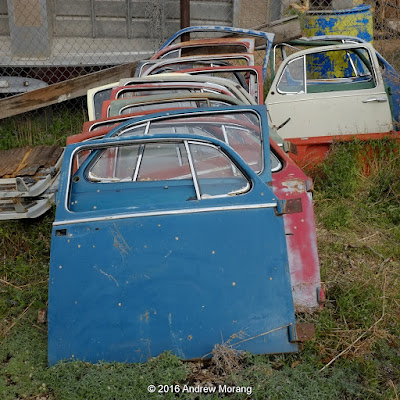 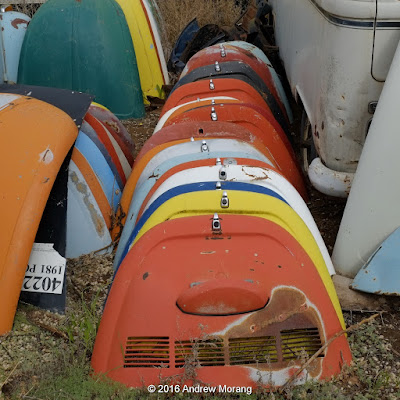 Tom had organized his inventory neatly. Volkswagens had such a long production life, you could fit parts from various years into a car you were restoring. The Type I (Beetle) was in production from 1945 to 2003. According to Wikipedia, "With 21,529,464 produced, the Beetle is the longest-running and most-manufactured car of a single platform ever made." 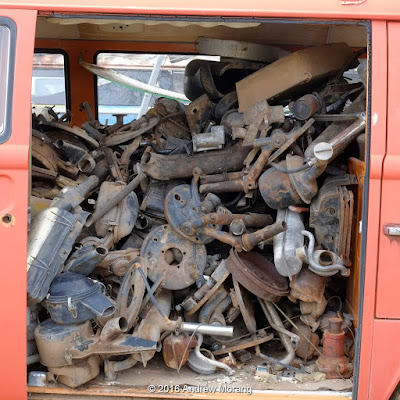 But if you wanted some chassis parts, air cleaners, mufflers, etc., that may have been more of a challenge.

My other article about a VW disposal yard is from Raymond, Mississippi. I need to return to see if it has changed.

These are digital images from a Fuji X-E1 digital camera. One day I should return with film.

UPDATE OCT. 2019: Many of the Volkswagens are still there, but the yard looks cleaner and the brush has been trimmed. Click this link to see the 2019 photographs.
Posted by Kodachromeguy at 11:36

I love this post. I had 2 VW "busses", 2 Karmann Ghia's, and 2 Beetles throughout my lifetime. My little red Karmann Ghia was my favorite, owned during the time I lived in the Metroplex--perfect little car for the city.

A bunch of vans were sold to some people in Germany so that cleared out a lot of space. They've been trying to sell the place for years but the property comes with all the VW's and parts - the last time I heard non-negotiable.

Thank you for the update. I bet if they advertised extensively, they could get more Volkswagen lovers from Germany, France, and other parts of northern Europe. For now, the virus has curtailed travel around the world. In the dry climate, the old cars in Moab will stay reasonably untouched, and they can wait for buyers to return.