A Short Tour of Vicksburg with the Rolleiflex 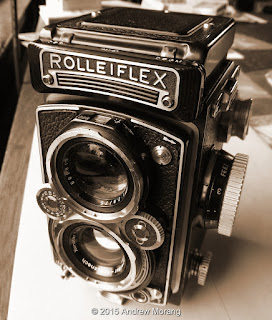 I recently decided to buy another Rolleiflex camera to replace one that I should never have sold ten years ago. There was one listed on eBay with a possible focus problem, but after writing the seller, I concluded that a previous buyer simply did not know what he was doing. Anyway, the price was right and the unit came in a Priority Mail box. Nice camera! This is a 3.5E from about 1959. The Schneider Xenotar taking lens is pristine and the body overall is very nice. According to Schneider Optics, the Xenotar is a 5-element, 4-group design, giving a 60° angle of coverage. The 75mm focal length has adequate coverage for the 6 × 6 (or 2¼ × 2¼ inch) film size. Film in 120-size (not 120mm!!) is still readily available from major mail-order photo suppliers such as B&H in New York or Freestyle in Los Angeles. So many medium format cameras using 120 film are still in use, I am confident 120 film will continue to be packaged for a few more decades, especially if the film revival continues. 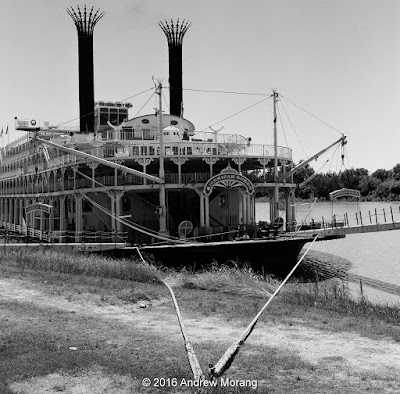 Two rolls of Kodak Tri-X 400 confirmed that the shutter was reasonably accurate, despite the camera probably having not been used for years. I used a tripod for all these tests. The American Queen was moored at the Vicksburg waterfront. The light was harsh, but the old Xenotar lens recorded impressive exposure range. Click any photograph to expand to 1600 pixels wide. 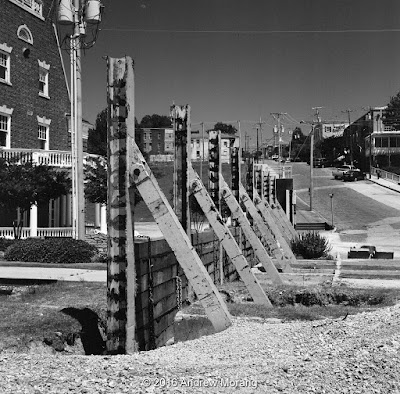 Some of the stop logs are still in place across Levee Street near the Yazoo & Mississippi Valley Depot. The sky is dark in this photograph thanks to a polarizing filter. The stop logs are a barrier placed across the street to keep out flood waters from the Yazoo Canal. At this site, the railroad tracks must be cut and removed to place the vertical steel I-beams and the timbers. 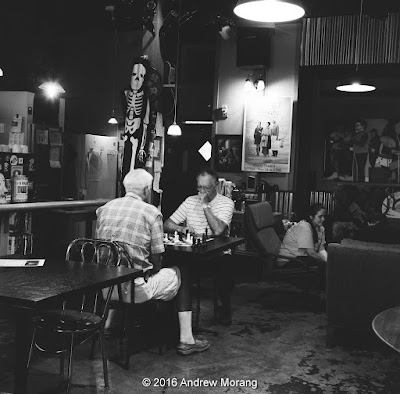 Just up the hill at the corner of Washington and Grove Streets is the Highway 61 Coffeehouse. This is the best coffee shop in Vicksburg, and you can spend all afternoon playing chess if you want. 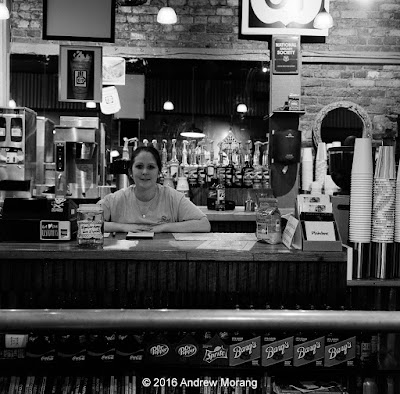 My charming friend Cammie makes me an espresso each time I visit. This was a 1-second exposure. 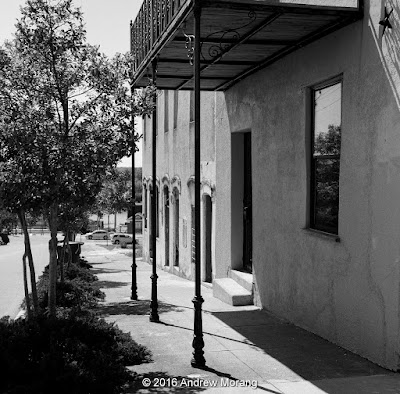 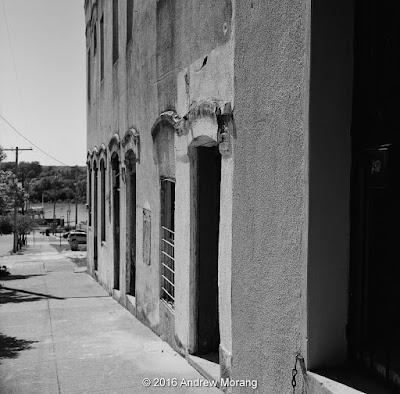 A block uphill, historic commercial buildings at 721 and 723 Grove Street are being restored. I wrote about these buildings in a 2012 post (click this link). 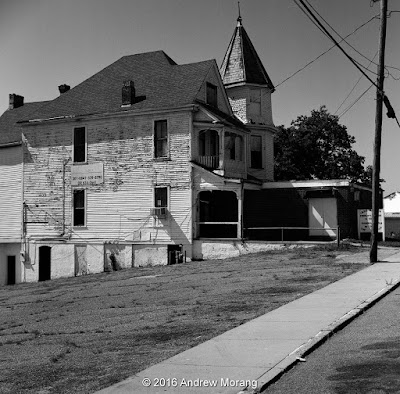 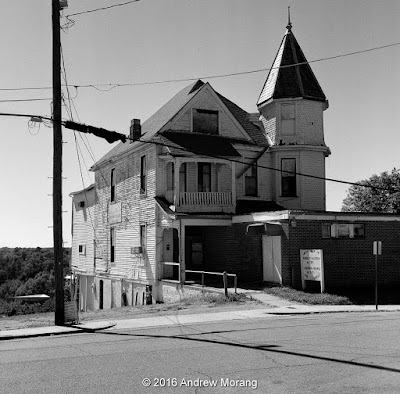 Walk north to 916 Walnut Street and you reach the old Fidelity Lodge. Part of the building is Victorian-era, but an ugly square section was added to the front much later. In 2015, the city placed a condemned sign on the property, but it is gone now. But I see no signs of renovation or maintenance. Some of the windows have lost their glass. The turret may have its original slate roof. 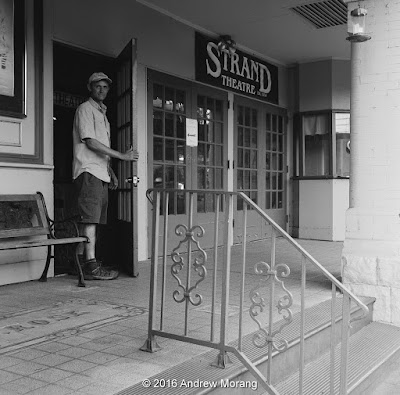 The Strand Theater at 717 Clay Street features foreign and art films as well as an occasional Hitchcock film and live theater. My friend Burhman stood for a ¼ sec exposure. I wrote about the Strand in 2011 when it was being restored (click the link). 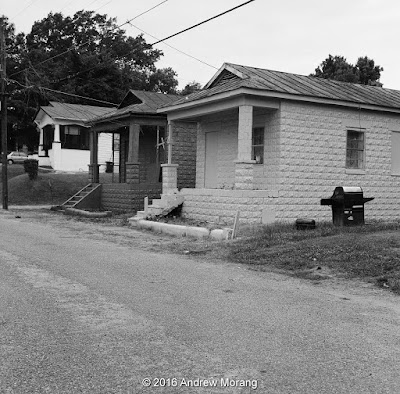 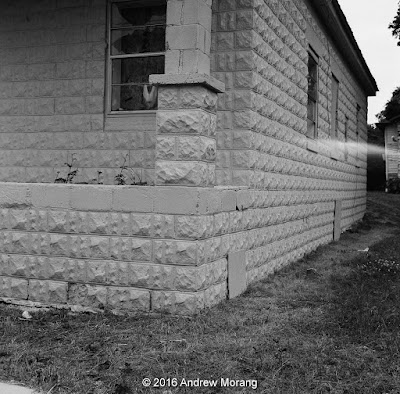 There are two very unusual houses at 1229 and 1231 West Magnolia made of concrete blocks that were molded to resemble limestone. I have forgotten what this type of manufactured stone was called. These houses have been painted bright blue, which is hard to appreciate in these monochrome photographs. 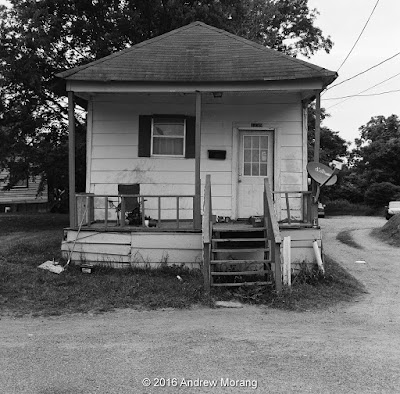 Number 1235 W. Magnolia is a more traditional wood cottage or shotgun shack. I photographed more houses in this neighborhood many years ago, but many have been torn down since then. 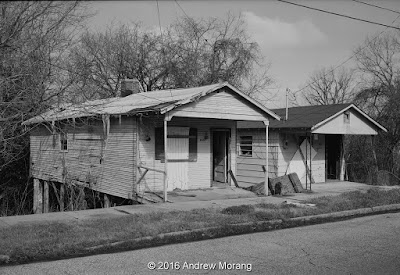 Finally, here are two cottages on Pearl Street. This photograph is from a 6×9 Tri-X negative taken with my Fuji GW690II camera. This is a big beast of a camera. It is not as much fun to use as the Rolleiflex, but has similar optical quality. The modern, multi-coated lens is higher contrast, so you need to reduce development time 10 or 20 percent compared to Rolleiflex development time.

North Coast Photographic Services in Carlsbad, California, developed the Tri-X film. They process their black and white film in a Hostert Dip & Dunk system using Clayton F76+ developer. I found that the regular development is too contrasty, so I requested to pull one stop (or N-1). The negatives are still a bit hard but close enough. If in doubt, you want the development to be low-contrast or soft because you can add contrast with software adjustment later, but with a hard negative, you might have lost details in the shadows (totally black) or the highlights (totally white).

I still have a few rolls of the super fine-grain Ektar 25 color negative film in the freezer. When the Rolleiflex comes back from its cleaning and overhaul, the Ektar 25 can go on a tour of the Mississippi Delta. For more information about how a Rolleiflex works, see this older post.

Dear readers, borrow or buy a film camera and try traditional photography. The results might surprise you. You might find it more rewarding than the "spray and pray" and instant gratification of digital imaging, the taking of a thousand photographs over a weekend that you soon file and forget.
Posted by Kodachromeguy at 20:52