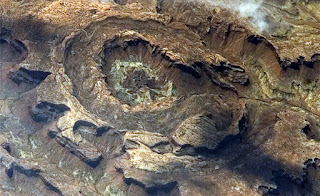 Dear readers, no urban decay this time, but a short description of a hike in an amazing geological terrain.

The Upheaval Dome is a circular geological feature in southern Utah in Canyonlands National Park. There are two major hypotheses for its formation. One is that the rock strata in this area is underlain by a salt dome. The salt is slowly rising because it is of lower density that the overlying sand- and siltstones, therefore causing an circular uplift. The other hypothesis invokes an impact from a meteorite about 60 million years ago. Some of the strata near the center of the area are almost vertical, which is anomalous for this general area. At the end of the post are some paragraphs from the National Park service which provide more details. The aerial photograph above is from NASA (via the National Park Service). 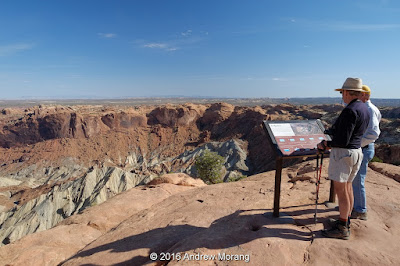 Even in person, it is difficult to appreciate the enormity of this terrain. The air was brilliantly clear in April, and from the overlook, we had few references that the other side of the dome was miles away. 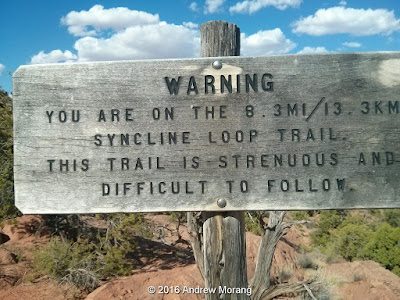 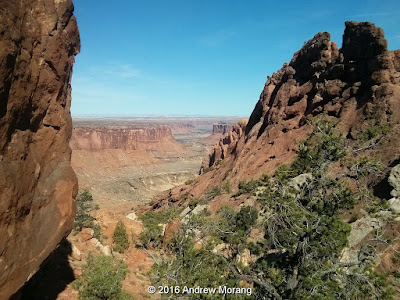 One of the most interesting hiking trails in Canyonlands National  Park is the 8.3-mile Syncline Loop Trail. It takes you from the Upheaval Dome parking lot around one side of the the outer rim (select south or north side), drops about 1300 ft into the canyon, and then ascends up to the other rim. My friends and I walked it in a clockwise direction (if viewed from above). 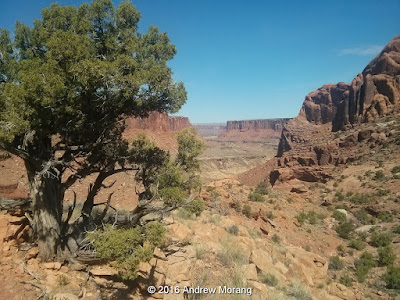 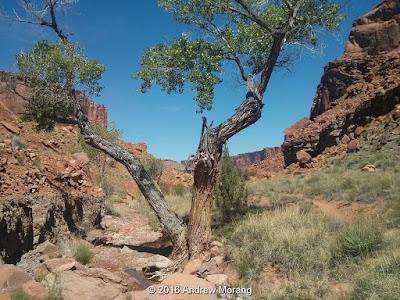 The descent down to the Canyon Trail is steep, with ledges and some rope-protected sections. 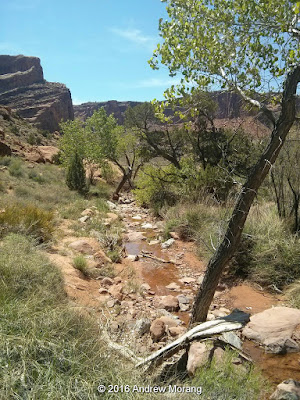 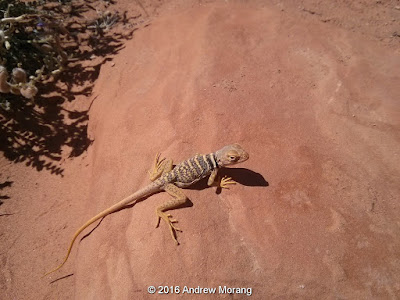 Down in the canyon is a different world. Water trickles in the deeper parts of the stream beds (at least it did in April). Rather impressive lizards scurry around the rocks. The only sound is the wind blowing through the leaves. 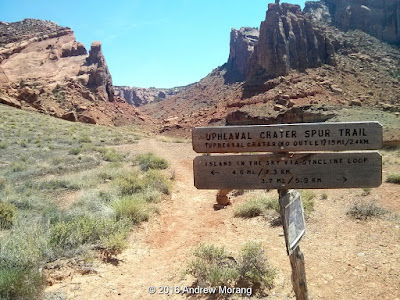 The Crater Spur trail will take you into the bottom of the crater that you were able to see from the Overlook some 1,500 ft above. We did not take the spur and continued to the north rim. 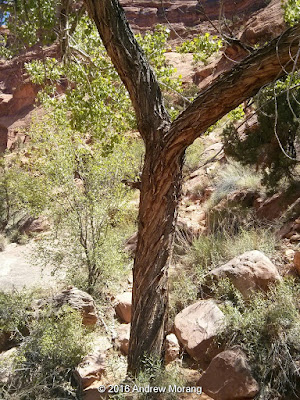 I love the Cottonwood trees, with their ridged and creased bark. Some are surprisingly massive, indicating that their roots get enough water from the streams, even through the long hot summers. For us, the maximum temperature was only about 80° F., but summer can easily exceed 100°. 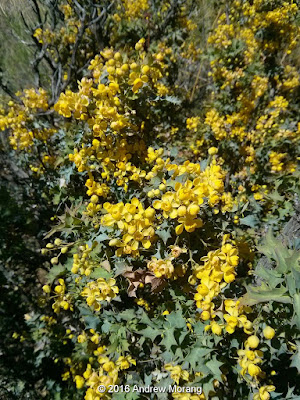 The desert flowers are spectacular, and the bees active. 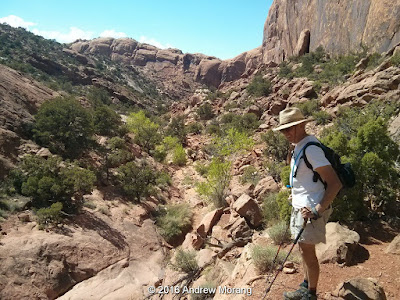 This is one of the most rewarding day hikes I have walked in a long time. The terrain is rough but   no worse than many trails in the Alps or Dolomites. Just be careful and take plenty of water. 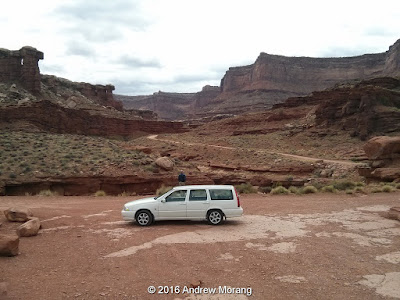 For your return to Moab, if you are adventurous, take the Shafer Trail downhill, which connects with the Potash Road. The Shafer Trail road was originally built by uranium miners in the 1950s and zig-zags precipitously down from the Island in the Sky plateau, eventually connecting to the Potash Road. I recommend you not try it uphill in a 2-wheel-drive car, or downhill in the rain, but on a dry day, downhill is fine in a normal car as long as you are cautious and avoid some of the ruts and higher rock outcrops. For the steepest sections, I left the manual transmission in 1st gear and let engine braking keep the speed under control. The brakes stayed cool. (If you only use automatic and don't know what gears do, don't try to learn here.)

Photographs taken with a Nexus 4 telephone (sorry, no real camera this day). I thank my friends Fred and Ben for being such cheerful companions.

The following information about the formation of the Upheaval Dome is from the National Park Service:


Canyonlands is a place of relative geologic order. Layers of sedimentary deposits systematically record chapters in the park's past. With some exceptions, these layers have not been altered, tilted or folded significantly in the millions of years since they were laid down by ancient seas, rivers or winds.

Upheaval Dome is quite a different story. In an area approximately three miles (5 km) across, rock layers are dramatically deformed. In the center, the rocks are pushed up into a circular structure called a dome, or an anticline. Surrounding this dome is a downwarp in the rock layers called a syncline. What caused these folds at Upheaval Dome? Geologists do not know for sure, but there are two main theories which are hotly debated.

Salt Dome Theory
A thick layer of salt, formed by the evaporation of ancient landlocked seas, underlies much of southeastern Utah and Canyonlands National Park. When under pressure from thousands of feet of overlying rock, the salt can flow plastically, like ice moving at the bottom of a glacier. In addition, salt is less dense than sandstone. As a result, over millions of years salt can flow up through rock layers as a "salt bubble", rising to the surface and creating salt domes that deform the surrounding rock.

When geologists first suggested that Upheaval Dome was the result of a salt dome, they believed the land form resulted from erosion of the rock layers above the dome itself. Recent research suggests that a salt bubble as well as the overlying rock have been entirely removed by erosion and the present surface of Upheaval Dome is the pinched off stem below the missing bubble. If true, Upheaval Dome would earn the distinction of being the most deeply eroded salt structure on earth.

Impact Crater Theory
When meteorites collide with the earth, they leave impact craters like the well-known one in Arizona. Some geologists estimate that roughly 60 million years ago, a meteorite with a diameter of approximately one-third of a mile hit at what is now the Upheaval Dome. The impact created a large explosion, sending dust and debris high into the atmosphere. The impact initially created an unstable crater that partially collapsed. As the area around Upheaval Dome reached an equilibrium, the rocks underground heaved upward to fill the void left by the impact. Erosion since the impact has washed away any meteorite debris, and now provides a glimpse into the interior of the impact crater, exposing rock layers once buried thousands of feet underground.

Upheaval Dome Today
Whatever the origin of Upheaval Dome, it is the result of erosion of a structural dome. Rock layers now at the surface within the dome were once buried at least a mile underground and are not visible anywhere else in the nearby area. While some call this feature a crater, it is not a crater in the traditional sense of the word, but simply another example of the erosion which created Canyonlands National Park.