Long-term readers recall that I have used my dad's Leica IIIC rangefinder camera for decades. He bought it at the Post Exchange in Guam in 1949 and used it for family photos in Asia and Europe. It was equipped with a Leitz Summitar 5 cm ƒ/2.0 collapsible-barrel lens. The Summitar was a remarkable 7-element optic of pre-WWII design. My sample has noticeable field curvature and displays a lot of aberrations at ƒ/2.0 and ƒ/2.8. That can be used creatively for certain types of work, and at ƒ/4.0 and smaller, the aberrations are barely noticeable.

But I often take pictures of architecture and wanted a lens that was more uniform over the entire field and maybe offered better resolution. But which lens to choose? Tens or hundreds of Leica thread-mount (ltm) lenses were made in the 20th century by German, Russian, and Japanese optical companies.


If money were no object (you know that fairy tale), Leica issued a limited production of their superb  Type 5 50mm Summicron in 1999 with the 39mm thread mount rather than the bayonet M mount used in their current cameras. I checked eBay and saw copies being sold by Hong Kong companies for over $2000 (Hong Kong is the place to look for unusual collector items like this). The extra-rare Leica 50mm ƒ/1.4 Summilux Type V is $3400. OK, above my budget.

Leica also issued their Type 2 Summicron in thread mount from 1960-1963. But this is another rare collector (= expensive) item. I have a Type 2 Summicron-DR in M mount, but there is no way that an M-mount lens can be fitted to the older thread-mount camera bodies.

I wanted a vintage lens as opposed to one of the modern Voigtlander (= Cosina) or Konica ltm lenses, which meant a 1950s or 1960s optic. It surprised me that the 1950s and 1960s ltm lenses from Minolta (Rokkor), Fujinon, Topcor, Tanaka (Tanar), Yashica, and Konica Hexar sell for hundreds, I suppose because of their rarity.

Soviet ltm lenses physically fit the Leica bodies but often have focussing issues because of a difference in the standard used for the focal length. Many users claim no issues, but I decided to stick with a lens specifically made for the Leica standard. Also, Soviet lenses suffer from highly variable quality control and material selection.

The Canon Camera Company made excellent interchangeable lens rangefinder cameras from the mid-1940s through 1972. The V series were especially innovative, according to Cameraquest. By the late-1960s, the single lens reflex (SLR) camera was dominant in the marketplace and Canon ended production of their innovative Canon 7S rangefinder camera in 1972. Leica and some of the Eastern Block companies continued to make interchangeable lens rangefinder cameras after the late-1960s, but most used bayonet-mount lenses. I remember visiting a camera store in Providence, Rhode Island, in 1976 or 1977, and they still had some new Canon ltm lenses in stock.

For more information about ltm lenses:
The ƒ/1.8 and ƒ/1.4 models were by far the most common, which directed my search. But I learned that a majority of the Type 2 ƒ/1.8 lenses suffer from haze on the glass element behind the aperture. No one has a solid answer why this develops, but the haze or scum etches the coating and even the glass. That left one choice: the gorgeous and well-regarded ƒ/1.4 lens. Japanese and Hong Kong eBay vendors offer these lenses in varying conditions. 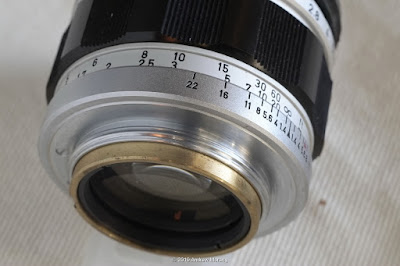 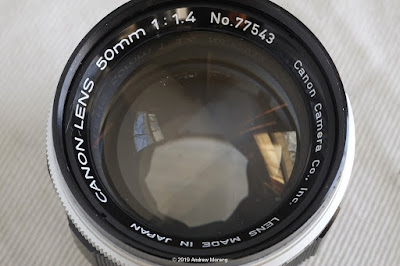 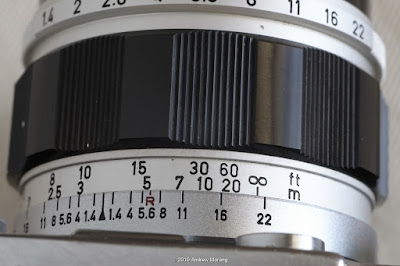 After a bit of searching, I bought this beauty from a Japanese eBay seller. He claimed there were some scratches on the coating, but I cannot see them. The coating is single layer, not multi as in 1970s and newer lenses. Mine is a Type 2, but I do not know the exact date because I have been unable to find a chronology of older Canon lens serial numbers. The lens is a modified Gaussian design with six elements in four groups. The aperture ranges from ƒ/1.4 to f/22 with nice precise clicks. The filter size is 48mm. I ordered a vented hood from one of the Chinese eBay vendors (about $3) as well as some used filters, and I was ready to take pictures.

Note: As of 2019, Leica is still making their superb M-A film rangefinder camera, and sales have increased with the revival of film.


Wow, new lens, so exciting. I loaded some Kodak BW400CN film in the IIIC and headed to the countryside south of Interstate 20 in central Mississippi.


This is a beautiful optic with nice rendering, even on BW400CN film. This was a top-grade lens in the 1960s, an example of Japanese optical and mechanical excellence. I will test it with fine-grain film; if I can find some 135 size Panatomic-X, that would give a genuine old-school appearance to my negatives. This lens is large enough to block some of the viewfinder, and I need to compose carefully. One solution would be to find a 50 mm auxiliary finder, and I just bought a Canon version. Final conclusion: if you want a classic lens for a Leica ltm rangefinder camera, definitely consider the Canon thread-mount lenses.
Posted by Kodachromeguy at 08:00

Very nice roundup of info on the ltm lenses.

Thank you. This 50mm ltm lens is amazingly good, an example of classic mid-century Japanese optical precision and excellence.

Came back to look again at this fine post. Makes me realize I could have benefitted from a more deliberate approach to assembling camera systems, including the Leica. I'm happy enough with my classic Elmar, but it came along with a IIIc body and a 135 Hektor I may never get around to using. I've had fun exploring the world of old cameras, but the likelihood of getting around to shooting them all again is very slim.

The little 5cm ƒ/3.5 Elmar made Leica's reputation in the 1930s and 1940s. It is fun to use some of this older technology and see how well it performs.

The 50 1.4 Canon is nice optical quality. But it is pretty big and sort of ruins the compact handiness of the thread mount Leica body. Maybe it is time to send it on to another photographer. The 5cm Summitar is only marginally inferior optically. I have only limited experience with the 3.5 Elmar.