Santa Rosa is the county seat of Guadalupe County, New Mexico. It is an unusual town to be in arid New Mexico because of its artesian lakes. These natural sinkholes in the limestone bedrock bring pure clear cold water to the surface. The pioneers of the mid-1800s must have found it to be a life-saver after crossing to desert. Even Route 66 travelers in the mid-20th century would have found a swim in the Blue Hole to be a relaxing relief on a hot summer day. According to Wikipedia,


The east-west highway through the town was designated as U.S. Highway 66 in 1926, and the increase in traffic made the community a popular rest stop with motels and cafes. Santa Rosa's stretch of Route 66 is part of film history. When John Steinbeck's epic novel, The Grapes of Wrath, was made into a movie, director John Ford used Santa Rosa for the memorable train scene. Tom Joad (Henry Fonda) watches a freight train steam over the Pecos River railroad bridge, into the sunset. 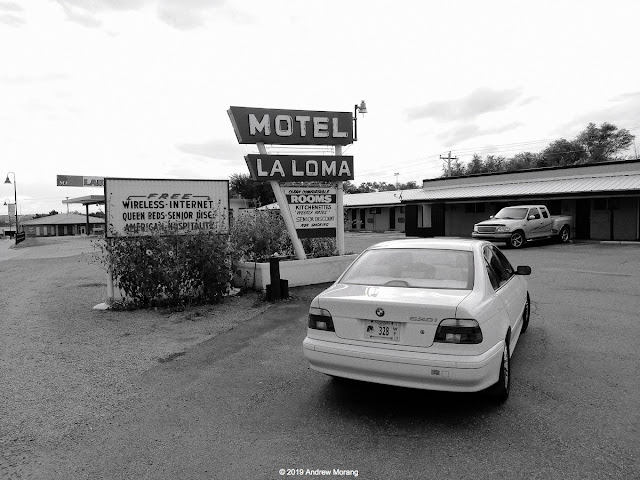 In August 2017, on a 90+° F day, a swim in the Blue Hole was chilling and fun. But on this (2019) trip, the temperature was well below 50° F, so no swim. But I did stay overnight in a Route 66 motel and spent a few hours exploring. The La Loma was clean and cheap, with a 1960s ambience. The Joseph's Bar and Grill next door was pretty bad. Santa Rosa is not a foody place.
Sadly, Will Rogers Drive is not very busy now. The old Rio Pecos sign at the closed truck terminal is a characteristic Route 66 photograph topic.

In the morning, I drove around town. Most of it is rather rough, with numerous unoccupied buildings. Some are wood frame, while others look like old adobe block with plaster facing.

This ended my short stay in Santa Rosa. Sadly, there is not much to keep a traveler here for long. But it is a piece of Route 66 history.
Posted by Kodachromeguy at 08:00

That seems to be the pattern for a lot of towns along Route 66. A few picturesque motels and big truck stops with shuttered Main Streets.

Thanks, Mike, you are right about the sad state of many of the small towns along Route 66. It is a cultural treasure that is slowly deteriorating. Even worse, Main Street is fading everywhere in the country. And few seem to care.