Continuing east on Route 66 (where it still exists) or I-40 through central New Mexico, the country is pretty arid with only an occasional farm or truck stop. According to the Route 66 Adventure Handbook, Cubero was bypassed by a new road in the 1930s. An entrepreneur built the Villa de Cubero, which is still in business on Route 66 where it diverges away from the interstate. You can buy snacks, gasoline, and other essentials there.
The Villa de Cubero Tourist Courts catered to early Route 66 travelers. According to the Route 66 Adventure Handbook, the adventure/musical Desert Song was filmed near here (the 1943 or 1953 version?). Desert Song was based on Sigund Romberg's 1926 operetta about a galant and handsome desert sheik who captures the heart of the beautiful city girl and rides off to the desert with her, singing all the time, while he also directs the revolt of the Berber tribesmen. 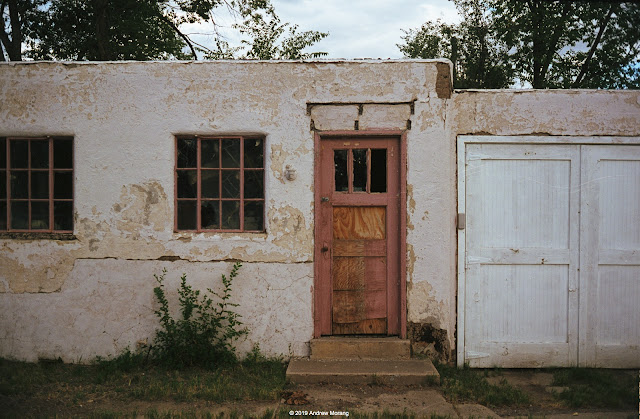 The tourist courts are closed but in reasonably intact condition. The Route 66 Adventure Handbook also notes that Ernest Hemingway may have written The Old Man and the Sea here! Or maybe he did not because he might have been in Cuba. A blog from the Villa de Cubero explores the controversy of Papa Hemingway's stay in the tourist court. We need to weigh the options:
Cuba: tropical breezes, palm trees, beautiful women, lots of booze, and deep sea fishing.
Cubero: desert, not much to do, and booze.
About a mile southeast on old Route 66 you come upon the former Budville Trading Company. It is closed and longer has pumps on the island.
A bit further east I saw another closed garage/filling station. This one had another long-wheelbase Cadillac!

That is all the excitement for Cubero. We will continue east on Route 66. Standby for more updates.
Posted by Kodachromeguy at 08:00

Good stories and pictures. The Electro is doing good work for you.
I've driven by those places many times on my way to Phoenix, but never stopped to see what is there.

Thank you for the comment. Buy one of the Route 66 handbooks as a guide to the old junk along the way. I even found a site with waypoints that you can download to your Garmin GPS navigator. This way you can cruise along the interstate and see when to pull off at a feature or tourist site.