Most Vicksburg residents are familiar with the convoluted route that the Kansas City Southern freight trains take through town. Trains cross the old Mississippi River Bridge, turn north, and either go to the rail yard at Levee Street or ascend parallel to Pearl Street and then turn inland to head towards Jackson. However, there is also a southern extension that now gets little use. At one time, the tracks ran as far south as Eaton Lighting off US 61 south (near the municipal airport), and trains would have served Eaton, the now-defunct Mississippi Chemical Company, and other industries.

The history of rail in this area is complicated, and I can't begin to understand it. In the late 1800s, several companies extended tracks almost as far south as the Big Black River. In 1883, the Louisville New Orleans & Texas Railroad absorbed existing track and rebuilt it to standard gauge to use for part of their Memphis-Vicksburg-Baton Rouge-New Orleans main line. I do not know when this service ended, but today, no track extends south of approximately Magnolia Road (near Rainbow Farms). No tracks have run to Port Gibson in many decades.

I have shown pictures of the Kansas City Rail yard at Levee Street before. My articles in Trackside Photographer or here at Urban Decay trace the main KCS line through Vicksburg. Here I will trace the lesser-used track that runs to the south starting at the Frontage Road (north of I-20). Access is limited; maybe I should build one of those rail-bicycles that some people use to ride on defunct rail lines. Surprisingly, the Mapquest map still shows the rail line all the way south to Fayette, even though the tracks have been gone for decades. If you look at the map and then switch to the satellite view, you can often see vegetation or property boundary changes that mark the former rail embankment.

This is where the southern line starts. The track at the lower right is the one we will follow in the following photographs. The rail lines run on the opposite (west) side of Stouts Bayou. The bayou is just beyond the brush in the photograph above and the track is visible in the clearing.
Iowa Boulevard drops down from the Frontage Road near the Parkside Play House and passes under I-20. Many people take this road as a shortcut to Walmart. The track here also passes under I-20 and runs straight through woods with the next access at Rifle Range Road. 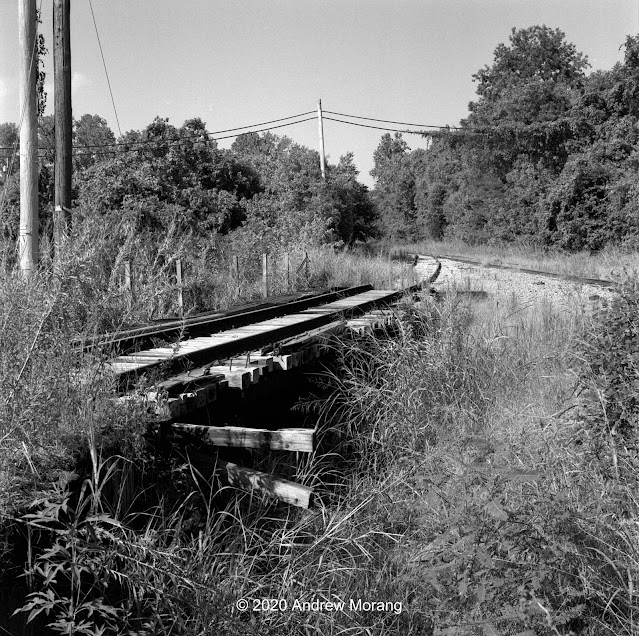 At Rifle Range Road, the track splits. One branch crosses a creek and leads to Halcros Chemicals. The right track above continues south a short distance
As this photograph shows, an occasional tank car is brought to Halcros Chemicals. These tracks once continued further south (beyond the sheds) and served the Mississippi Chemical Company. According to Google Maps aerial photographs, those tracks are gone.
Mississippi Chemical operated from 1953 to 2002, when the parent company declared bankruptcy (according to The Vicksburg Post). Over the years, the company made pesticides, fertilizers, rocket fuel, nerve gas, and other industrial chemicals. Toxins and arsenic seeped into the ground, and part of the area needed to be cleaned as a Superfund site. How many rail cars carried rocket fuel or nerve gas on these tracks over the decades?
The other track (the one on the right side in the photograph above) only continues a few hundred meters south until you come across abandoned (or permanently parked?) timber railroad cars. They seem to continue indefinitely. What are they here? Are the wheels and steel not worth reusing?
Beyond the timber rail cars, the track continues almost to Warrenton Road, according to Google Maps. At Warrenton, the rails are gone, and the old bed under the bridge has grown in so much, you can't tell that track once ran there.
Further south, the old embankment is being mowed by someone. Why? Will this right-of-way be used by some entity?
By the time you reach Warrenton Lane, near the Cedars Elementary School, the right-of-way is overgrown. You can see a bit of track disappearing into the brush.
A few miles south, only a short stub of track remains near the former Marathon Letourneau plant at Letourneau road. Further south, the terrain is wooded, and the railroad right-of-way is hidden or lost.

As I wrote above, decades ago, the rail line extended south to Port Gibson and then further to Baton Rouge. I was not sure if I could find any remnants of the old line, but while driving on Ingleside Karnac Ferry Road, I was surprised to cross a modern bridge over a distinctive V-shaped valley. A dirt road ran in this valley, but the large amount of gravel gave it away and the former rail line. The photograph above is from the bridge looking north.
The 1884-vintage Yazoo and Mississippi Valley Railroad depot is in Post Gibson at 1202 Market Street. It was converted into a restaurant in 1977 but is not in use now. Many of these railroad depot restaurants do not last long. Someone ambitiously renovates the buildings, but after a short burst of energy, the restaurant closes. A Mississippi Department of Archives and History Historic Sites Survey describes the depot.
This has been our short excursion on the southern rail extension. Thank you for riding along.
Posted by Kodachromeguy at 08:00

Cool trip on a cool morning. Love train tracks, rail beds, depots, and everything they represent. You did an excellent job of capturing this--my favorite is the logging cars.

Thank you for the vote of confidence. The rail cars are rather eerie - just sitting there as the forest and jungle slowly grows inwards. I will go back and take some more pictures.