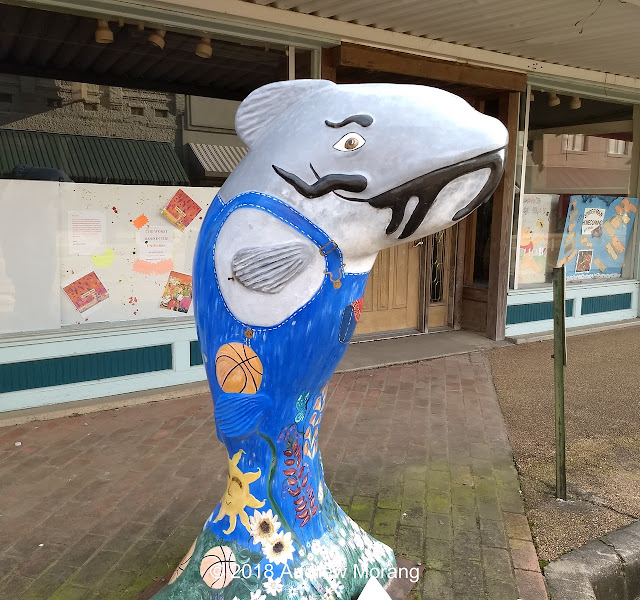 Belzoni is the county seat for Humphreys County, Mississippi. According to Wikipedia, the town was named for Giovanni Battista Belzoni, a 19th-century Italian archaeologist and explorer. How did he end up in the Mississippi Delta? In the 1970s, Belzoni was known as the Catfish Capital of the United States for having a greater percentage of acreage used for catfish production than any other county. I do not know if this is still true, but the city does play up the catfish heritage with statues of smiling catfish at various street corners.
Sadly, the big catfish packing plant has been closed for many years. Many jobs must have been lost when it shut. 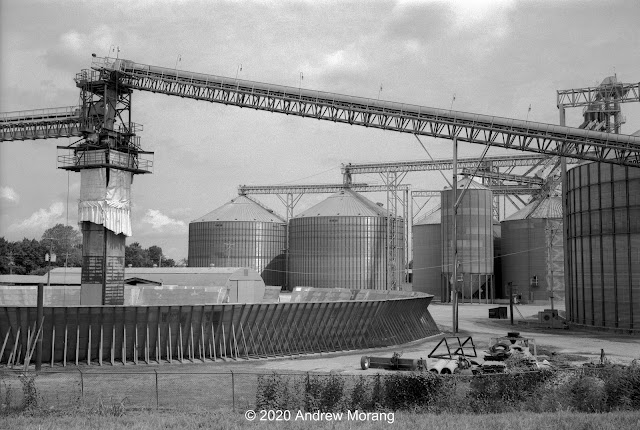 Approaching Belzoni from the south on US 49E, the very impressive Farmers' Grain Terminal complex at 509 Silver City Road dominates the skyline. At some time, these circles were covered with a huge cloth tent and contained corn.
Head further into town on Silver City Road and you pass miscellaneous housing, old stores, a closed gin, and an unused silo complex.
Jackson Street runs E-W through town and may be the traditional "main drag."
I was pleased that many of the shops are open and conducting some sort of business. There is even a Western Auto still open. I have not seen a Western Auto in a least a decade. According to Wikipedia,


Western Auto Supply Company—known more widely as Western Auto—was a specialty retail chain of stores that supplied automobile parts and accessories. It operated approximately 1200 stores across the United States. It was started in 1909 in Kansas City, Missouri, by George Pepperdine and Don Abnor Davis. Pepperdine later founded Pepperdine University. Western Auto was bought by Beneficial Corporation in 1961; Western Auto's management led a leveraged buyout in 1985, leading three years later to a sale to Sears. Sears sold most of the company to Advance Auto Parts in 1998, and by 2003, the resulting merger had led to the end of the Western Auto brand and its product distribution network.

One of the founders also founded Pepperdine University? Impressive.
The charming proprietor of Renee's Beauty Supply generously let me take a picture of the healthy beauties outside of her store. I was glad to see on my 2020 visit that Renee's is still open and operating, despite the slowdown from the virus.
The Cresent Theatre on Hayden Street is closed and may be for sale. I was surprised to find a photograph in the Library of Congress archives taken in 1939 by Marion Post Wolcott of the very same side stairway on the Crescent. In the segregated era, it was common for African American patrons to be seated in the balcony. Notice the sign on the narrow door that states "White Men Only."

This has been our short tour of Belzoni, Mississippi. It is an interesting place and worth a visit if you are in the central Mississippi Delta. Thank you for coming along this short trip.
Posted by Kodachromeguy at 08:00

Interesting photographs. I am not sure if the black and white make it look more desolate than it really is.

Very nice work with the Spotmatic and the Leica.
I worked on fish farms in southern Idaho. There were some catfish in the area, but we only grew trout. Wish I had some pictures of all that.

Hi, the tour guide for the county is located right behind the City Park located on West Jackson Street just West of the liquor store on the south side of the street. There is a big hotel across the street from the park and directly behind the park you will find the Catfish museum and touring information. Have a blessed day!

Apologies, my name is Popoola Hooper former Alderman of Ward 2 City of Belzoni.

Thank you, Popoola. The next time I drive to Belzoni, I will check out the catfish museum. Is there a restaurant that specializes in catfish?

Unfortunately not. The city is very well renowned for the fish so it's ready at almost every venue. The place that was the go to closed after the owner passed away. It was called Peter Bo's. I have as of yet to get some bad catfish from any venue. Everyone has it down to the second for perfect catfish.

No, it belzoni is as desolate as the pictures depict.