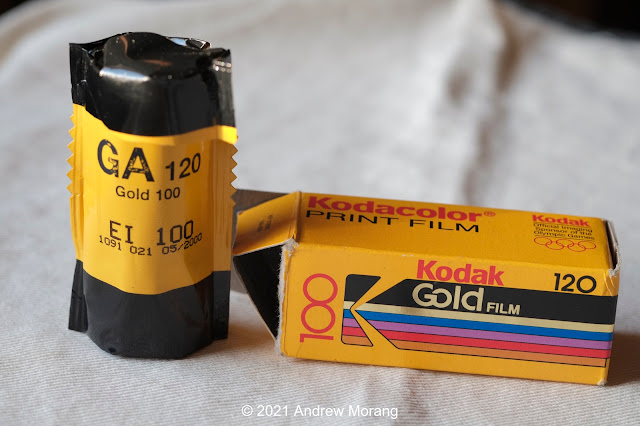 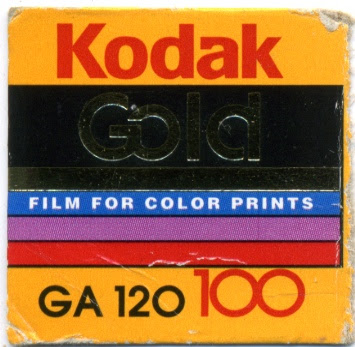 Dear Readers, this is the last (for now) article in my series on discontinued types of camera film ("Films from the Dead").

Kodak's Gold color negative films (for color prints) were famous for consistent and reliable results under various conditions. No matter what a customer did with their roll, a good laboratory could usually recover a decent image. Kodak manufactured the 35mm versions in USA, Mexico, China, and possibly other countries. I was familiar with Gold 100, 200, and 400 in 135mm size for 35mm cameras but had not seen other sizes. Therefore, I was surprised to see this roll of 120 size 100 in the freezer of a former friend who passed away a few years ago.

This roll expired in 2000, so I wondered if it would work, but it had been frozen all these years. I loaded it in my Hasselblad and took photographs in the area under various light conditions. I exposed it at EI=64, on the assumption that it had lost some sensitivity over the years.

I sent the roll to Dwayne's Photo in Parsons, Kansas, to develop in C-41 chemicals. Dwayne's has been in business for decades, and some of you old-timers may remember that this was the very last laboratory on earth to process Kodachrome slides.

I scanned the frames with a Minolta Scan-Multi medium format film scanner operated with Silverfast Ai software. The Gold 100 profile was not quite right and the automatic scan produced very green images. It is very possible that the film had shifted despite its long storage in the freezer. But I corrected the color balance using the grey dropper tool, and the resulting scans look pretty good for 20-year-old film. Please click any frame to see it at 1600 pixels wide. All comments welcome.

I came across this old school one day while I was biking on a new route in Louisiana. No one is ever around when I have been there and therefore have not been able to ask about the school's history. Was this one of those separate but equal establishments erected quickly in the 1960s or 1970s? Was it closed because of asbestos? The panels from the roof eaves are asbestos, and they crunch underfoot when you walk near the building.

Lessons of the Discontinued Film Series

What have I learned from these experiments using discontinued film stocks? I think the main lesson is if the film has been frozen or at least kept cool, it may be perfectly usable:

If any of you readers have experience with expired film, please add notes to the comments. Thank you for reading along.

These look good - like consumer color film looks when shot on a gloomy day.