Another Film Treasure: Ilford Pan-F Plus 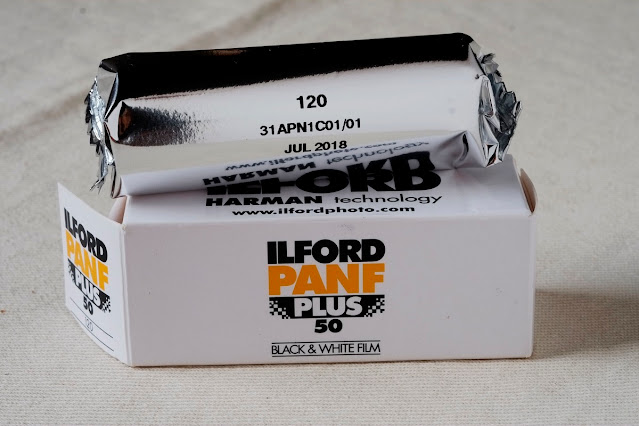 This short review is for a film that is still in production (yes, I do sometimes use modern film):  Ilford Pan F Plus. According to the manufacturer:

Suitable for bright conditions from sunny days to controlled studio lighting. It suits subjects ranging from architecture and still-life to portraiture and fashion.

PAN F PLUS is perfect for enlargements as negatives show an outstanding range of tone, high-edge contrast and extreme sharpness. It is therefore also suitable for a range of specialist or scientific applications such as photomicrography or the production of black and white slides.

This is a traditional cubic grain film, like the Kodak Panatomic-X that I normally use when I want a fine-grain traditional film. Pan-F has been in production for decades, but for some reason, I never tried it. My friend in Indiana, Jim Grey generously sent me a roll of Verichrome Pan film, but he also included a roll of Pan-F in 120 size and said Go At It. Most reviewers write that it is contrasty, so I loaded it in my Hasselblad and set out for Port Gibson on the last day of 2020, a gloomy day with drizzle (my favorite light). Because of the low light, these are all tripod-mounted exposures. I exposed it at EI (exposure index) of 32.

I sent the film to Northeast Photographic in Bath, Maine, to develop and scanned the negatives with my Minolta medium format film scanner. To the eye, the negatives looked too contrasty. But the Silverfast Ai scanning software has a profile for Pan-F, and the resulting scans looked just about right, with little need to manually adjust the contrast. Here are some examples, all full-frame scans. Click any frame to expand it. Please tell me what you think via the comments.

I remember driving by this shop/gas station many times and thinking I should take some photographs. But I never did and now it is closed. Bogus.

North of Port Gibson, some shaded narrow roads wind through the woods. One of these leads past the popular Warner Tully YMCA summer camp, known by generations of summer campers. I want to go back and explore some more. You see a lot of trailers with beat-up cars and trucks abandoned on the lots.
Port Gibson is pretty rough. Despite its fine architectural heritage, much of the town looks beat-up and dirty. The downtown has hollowed-out, like so many small towns in the US heartland.
I chatted with the gent who lives here. He graciously let me take a picture of his house. He had interesting items on the porch and in the yard.
This is the old Highway 61 bridge. Looking west, you see it from the current 61 bridge. I tried to find a viewpoint. Some gents at a car shop/garage graciously escorted me through the shop to the muddy banks of the Little Bayou Pierre. I slipped - mud everywhere. They said when the river overtops its banks, they get nasty water in their garage (and snakes). Note the water level stains of the concrete pier.
This is the end of my short experiment with Ilford Pan-F. This is nice film! It is very fine grain, similar to the Kodak Panatomic-X that I like. On this overcast, drizzly day, I did not have any issues with contrast, and cannot comment on its performance on a sunny day. Of course, you can modify development to make a black and white film more or less contrasty. I am not sure if I will use it in the future because I still have 10 or 12 rolls of Panatomic-X in the freezer, as well as some Fuji Acros 100 film and even some Agfapan 25. For hand-held use, Tri-X is more convenient. Regardless, thanks, Jim Grey, for sending me a roll of this Pan-F!
This is no. 07 of my irregular series on different films, but this product is still in production, unlike the other emulsions in the series.
Posted by Kodachromeguy at 08:00

You're getting better results from Pan F than I ever do!

Looks good. I'm encouraged to try the rolls I have now. I have mostly shot faster films in medium format in the past, but that very fine grain looks promising.

You picked a great day for Pan F. As slow as it is, it's best in softer light. Try shooting it at ISO 25, it cuts backs the contrast a bit and to my eye at least works better (at 25) on sunny days.

Oops, I forgot to write in the article that I exposed the Pan-F at EI=32. I'll add that to the text. Your hint of 25 is a good one, Ed. usually use an incident light meter, and that often gives a bit more exposure than reflected, so in effect, I probably was around 25.

It's been awhile since I shot any PanF+. I've seen others have great results with it, but they seem to elude me for some reason. I do like the tones you got here. Nice work.