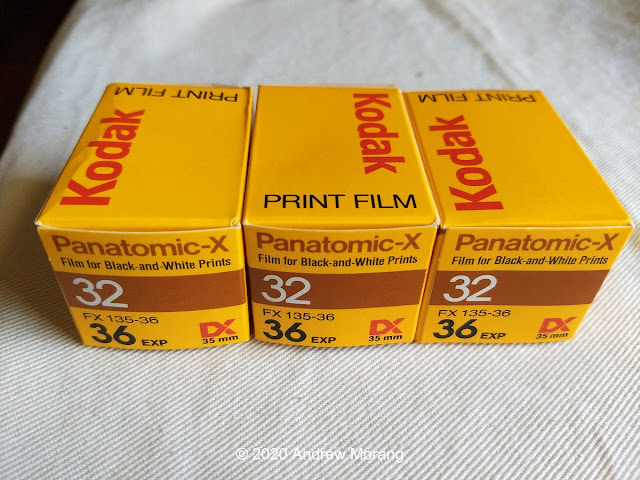 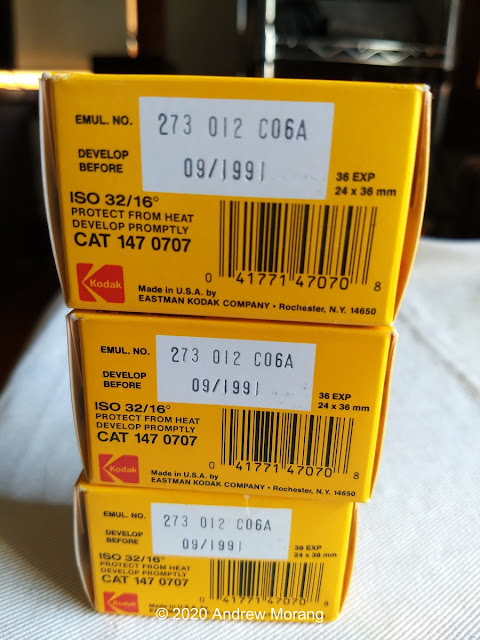 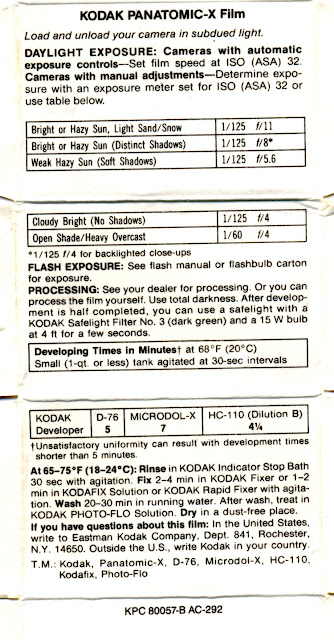 Oh, oh, trouble. A fellow on eBay advertised a brick of Kodak Panatomic-X film in 135 size (for regular 35mm cameras) that he said had been frozen. Long-term readers know that I have been using my dwindling stash of 120-size Panatomic-X for the last few years with great success (please click the link). Many photographers on the web claim to miss it. And now I could try some of this classic film in my 35mm cameras? This was too good to resist; I bought six rolls and loaded a camera.

Eastman Kodak introduced Panatomic in 1933. It was designed to be an extremely fine grain film, which meant it could be enlarged for large prints and still retain details. The early version was on nitrate base, but around 1937, Kodak reformulated it on safety base, renaming it Panatomic-X. Sadly, Kodak discontinued this well-loved product around 1988 or 1989, claiming that TMax 100 could serve as a substitute. I am sure this is true, but many photographers regretted the loss of the older film. Used with top-grade lenses and careful technique (that means a tripod), the detail in a Panatomic-X negative is remarkable, even in this age of high-megapixel digital cameras.

There is always a risk with using expired film, but slow speed black and white emulsions usually age well with minimal fog problems. If the films have been refrigerated or frozen, they typically are completely usable. Long-term readers may recall that I had great results with 1960s GAF Verapan film packs that had been frozen for 50 years. Color film is much more susceptible to color shifts and other issues, but if you find some old black and white film, by all means try it.

Here are scenes from in and around Vicksburg, Mississippi, from my new/old Panatomic-X film. Judge for yourself if you like the look or tonality. I resized to 1600 pixels on the long dimension. Click a picture to enlarge it. Please comment if you have some observations.

Levee Street has remnants of Vicksburg's industrial infrastructure. There is a lot of barge traffic on the Yazoo Canal. The old tank farm in the photograph above has been unused for at least three decades, but in late 2020 I saw that one of the tanks had been removed and the piping had been cleaned and painted. These photographs are from an overcast day with occasional drizzle. 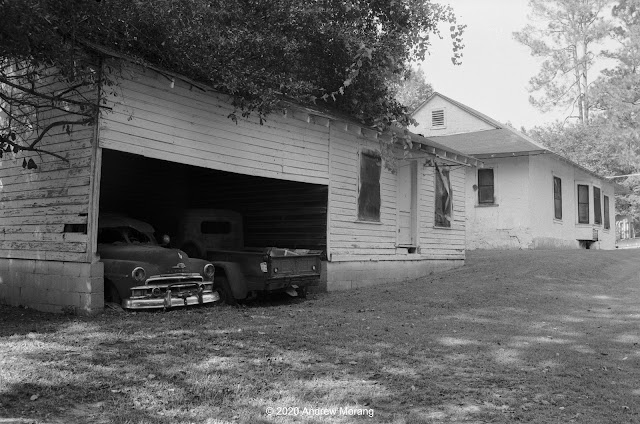 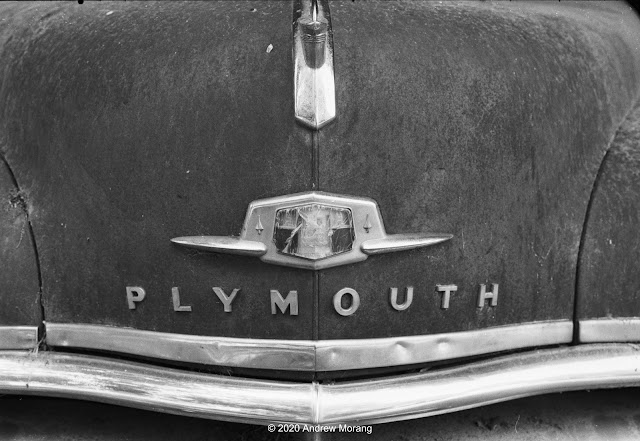 This stucco-clad house on the corner of Second and National Streets has been uninhabited for three decades, but it is not abandoned. Someone painted the exterior not long ago. A neighbor came over when I was photographing and said the sheriff pays him to mow the grass. The old Plymouth and pickup truck have been in the carport for decades. Status: unknown.

Yazoo Street runs south from Army-Navy Drive past the City workshops and dead ends almost under the North Frontage Road bridge. Decades ago, you could see more houses in this quiet corner of town, but now only this one house remains. The air was misty, accounting for the glow in the tree canopy.

Thank you Malcolm and Karen for letting me take some photographs in the interesting Adolph Rose Antiques.
Lower Clay Street, near the Yazoo Canal, was once lined with commercial buildings and warehouses. A limited number still exist. Just west of Washington Street, an alley gives access to the back lots of some of the old commercial buildings.

This forlorn building is one of the few commercial buildings remaining just south of downtown. Notice the brickwork on the right unit, evidence of fine construction a century ago.

These rail cars are parked on the tracks next to Halcros Chemical, just south of Rifle Range Road. Status: unknown.

This is another former gas station on US 98 a few miles northeast of Natchez. I liked the light shining on the cracked driveway.

This is a pump house at the US Army Corps of Engineers' Mississippi River Basin Model, the largest hydraulic model of a watershed ever built. The site has been neglected for decades and is finally being cleaned by the Friends of the Mississippi River Basin Model non-profit organization. I have written about the model many times; please use the search button to find older posts.

This is another pleasant surprise! This long-expired Panatomic-X film appears to be totally viable.
I cannot recommend one way or the other if you should seek out rolls of Panatomic-X to use. But if you find a stash in a relative's house or closet, go for it. I advise a user to expose it at EI=20, making this largely a tripod film. It certainly is not as convenient to use as Fuji Acros or Kodak TMax 100, but the Panatomic-X has a different look (Sorry, I cannot describe it any differently).
This is another example of the sophistication and precision of photographic film manufacture that was achieved more than a half century ago. Don't let anyone tell you that film is primitive or obsolete.
My friend, Mike, from Photography & Vintage Film Cameras in Albuquerque shot one of these rolls and also got excellent results. Click the link for his interesting blog.
(Note: Oops, while editing this article, I briefly published a draft in February when I used the wrong date. It was intended for March.)
This is no. 5 of my irregular series on Abandoned Films ("Films from the Dead").
Posted by Kodachromeguy at 08:00

Nice work! High contrast seems to be all the rage these days. It's pleasing to see the grays come out. Pan-X sure is the film for it.

I was doing photography well before the demise of Panatomic=X, but somehow missed the opportunity then to explore the possibilities of slow, fine-grained film. So, it was great fun recently to explore the qualities of this sturdy film.