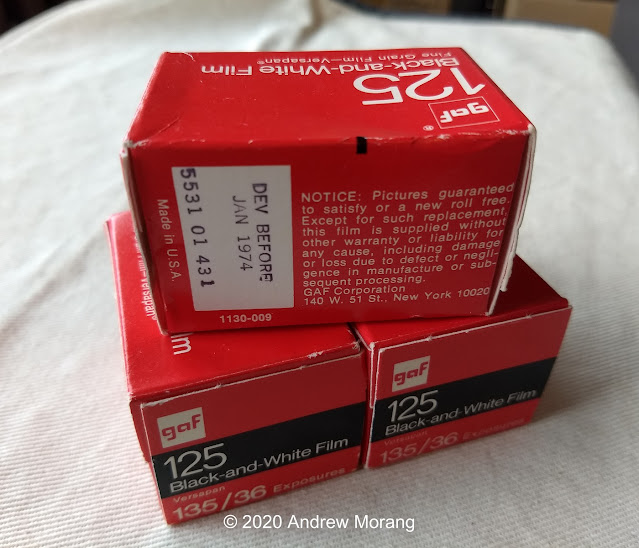 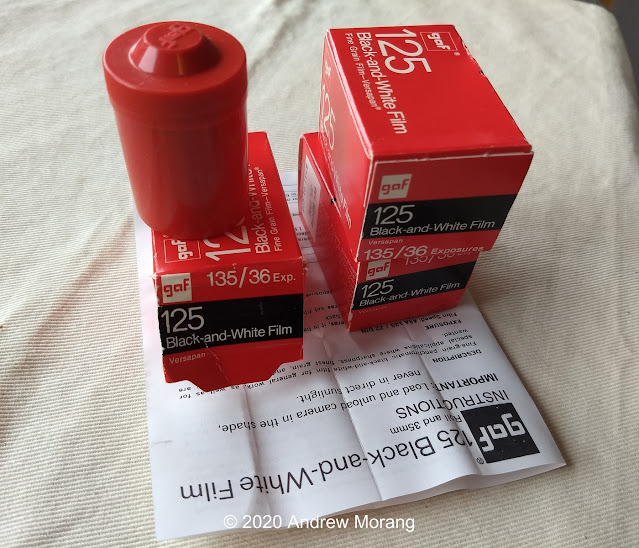 Dear Readers, this will be a continuation of my irregular series about discontinued photographic films ("Film from the Dead"). It sounds very photo-geeky, but don't worry, there will be urban decay examples and even some "pretty" pictures.
I have written about older films before. Long-term readers may remember that in spring of 2020, my friend gave me a cooler full of GAF Versapan 4×5" film packs. He had stored them in freezers since the 1960s. They proved to be completely viable, and I liked the results so much, I looked for other sizes of Versapan film on eBay. Amazingly, a fellow listed three rolls of 135 size (regular 35mm) with 1974 expiration, which he claimed had been frozen. Well, that was too good to resist, so I bought them.
Some of you old-timers may remember when GAF sold many types of film in the United States (I am not sure about foreign distribution). The black and white emulsions were well-regarded, and I do not know why they stopped production of consumer products in the 1970s. This was 30 years before the digital tsunami overwhelmed the film companies, so digital is not a culprit here. GAF stands for General Aniline & Film Co., an old-line film company from Binghamton, New York. The history of this company is complicated and was intertwined with ANSCO and Agfa. Read a more detailed history on Mike Eckman's excellent review of an ANSCO Super Regent camera.

I loaded my first roll of Versapan in a Pentax Spotmatic II camera at exposure index (EI) of 100 and used part of the roll around Vicksburg. Then I exposed the second half in my Leica M2 camera. I sent the roll to Northeast Photographic in Bath, Maine, to develop in Xtol developer. Xtol is an amazingly effective developer and appears to work well with almost any black and white emulsion. The negatives displayed high base fog, which is common for old film, but plenty of density and detail. For my second roll, I exposed at EI=64 in a Vito BL camera.
I scanned the negatives with a Plustek 7600i scanner. The Silverfast Ai scanning software did not have a Versapan profile (obviously), but with some experimenting, I selected the profile for Kodak BW400CN film. This was surprising because BW400CN was a chromogenic film (C-41 development used for color print films), but regardless, I liked the way it handled the Versapan. But for some frames, the Kodak Plus-X profile looked better.

Smith's Appliances is full of interesting automobile and filling station memorabilia. Thank you Mr. Smith for generously letting me take pictures inside. This was a 1-sec exposure with the Leica camera placed on a shelf.

East of Edwards, US 80 is the frontage road just south of I-20. I do not know if this was the alignment of 80 originally or if the old road bed was subsumed by the interstate. West of Edwards, 80 is the original 1920s roadway.

The woods north of Port Gibson have some interesting old cottages and grungy trailers off the winding roads. I need to return to explore some more.

This was a pleasant surprise! Amazingly, this Versapan still works and looks great. I love the tonality for my type of pictures. It shows that 50-year old black and white film that has been cool-stored can be used years after its expiration date. One roll of Versapan is left in my freezer - on hold for a future project.
These ancient Versapans were definitely more grainy than Fuji Acros or even contemporary Kodak Tri-X. Versapan looks like an old-school mid-speed film, like Plus-X. Well, no wonder, it is 50 years old. It gave many of my pictures a gritty press photography look, which I like for urban decay. Looking at the original TIFF files carefully, I can see many tiny white spots in the negatives. I think they are not bubbles from development but rather deterioration of the emulsion. Resized at 1600 pixels to show here on the web, the spots are invisible.
It is fun to experiment with old films, but you need some assurance on how they were stored.
The next article will be on Kodak Panatomic-X film in 135 size.

Please click the link for the data sheet that came with the GAF Versapan film. They list the film speed as ASA 125/22 DIN. Unfortunately, it does not provide any development times for contemporary film developers.
Posted by Kodachromeguy at 08:00

Pretty amazing performance from that old roll of film. Looks somewhat like HP5 to me which has noticeable but tight grain.

Thank you, gents. It is astonishing that a 50-year-old film is still viable. The fresh product was probably finer grain, but I wonder if the tonality would have been much different? Will our digital media be usable or readable in 50 years?

One of the things I enjoy most about your photography is looking at the small details in each photograph. I generally look at them at least twice and sometimes more, and spot tiny details I missed the first look.

Thank you. Often these rural or urban structures and cultural remains are full of subtle details that you would miss if you just skip on by quickly. In this way, photography makes you slow down and concentrate.