When I first moved to Vicksburg in the mid-1980s, Metrocenter Mall in Jackson was fresh, active, vibrant, and (I presume) prosperous. The mall opened in 1978, and Sears Roebuck anchored the west end, McRae's the east. The food court was busy, and numerous smaller companies occupied stores on two floors. The parking lot was crowded. Other companies occupied buildings nearby, such as Toys-R-Us on Hwy 80, and Service Merchandise in a nearby building.

But as the 1990s progressed, Metrocenter became seedy and merchants left. One by one, stores closed. The anchors lingered until the 2000s. McRae's became part of Belk, which continued at Metrocenter until 2009, and Sears closed in 2012. Sears had already abandoned its Vicksburg store and, as far as I know, there are no other full-line Sears stores anywhere near Jackson. 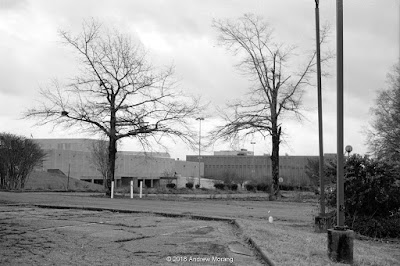 As of 2019, part of the complex is still occupied. I wanted to take some closer pictures, but odd cars lingering and other crapped-out cars meeting the first ones did not bode well for security.
Robinson Road, west of Metrocenter, is pretty bleak. Buildings are empty, and crummy cars and dude-mobiles rattle along. 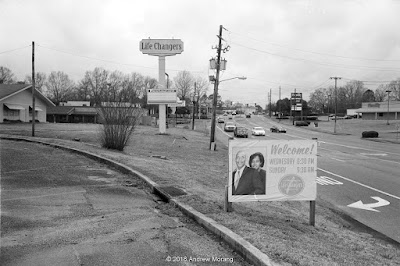 At least one former restaurant has been converted into a church. That is an effective use of space, but the city loses the property tax revenue.
The former Piccadilly restaurant was secure but clearly no longer used. 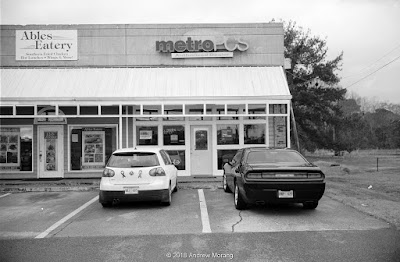 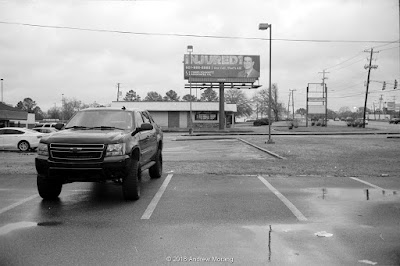 Some businesses are still operating. We were well-served by the efficient employees at the Metro PCS mobile phone store. The parking lot had some interesting transportation machinery.

What can revive an area like this? Why was this area prosperous in the 1980s and, only 30 years later, has become a scummy backwater? Why is so much of west Jackson a wasteland?

I took these photographs on Fuji Acros 100 35mm black and white film with my 1967-vintage Leica M2 rangefinder camera. I used the 50mm ƒ/2.0 Summicron-DR and 35mm ƒ/2.0 Summicron (version 4) lenses. A medium yellow filter helped add texture in the clouds. Acros is a superb fine-grain film. I scanned the frames with a Plustek 7600i film scanner.

You know why it’s a wasteland 30 years later. Same reason the entire US is becoming a wasteland. No need to say anymore. RIP.

Yes, many parts of the USA have become a wasteland. It is horrifying. I have been trying to document the decay in this blog for the last 10 years. Thank you for commenting.