In my previous article, I related the sad news that the famous Durgin Park Restaurant in Boston closed in January, 2019. Durgin Park was located in the north-most granite building of the Quincy Market complex. The granite came from the famous Quincy Quarry, where my friends and I rock-climbed in the 1960s (but that is another story for a future article).
Boston's well-known Faneuil Hall is just to the west, and beyond that, Government Center, with its 1960s Brutalist-Moderne Boston City Hall ("the world's ugliest building"). Up through the 1950s, the area west of Faneuil Hall was known as Scollay Square, a formerly vibrant commercial and entertainment district. But by World War II, Scollay was grungy and run-down. My dad called it Squalid Square. In the late-1950s, the city of Boston razed more than 1000 buildings and redeveloped the area as Government Center. Unfortunately, we have no family photographs of Scollay Square. 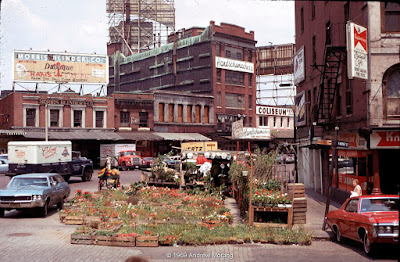 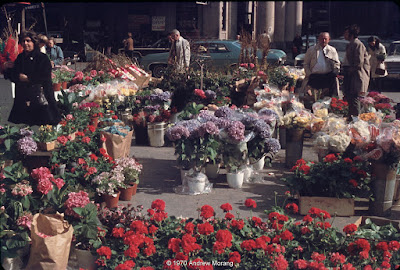 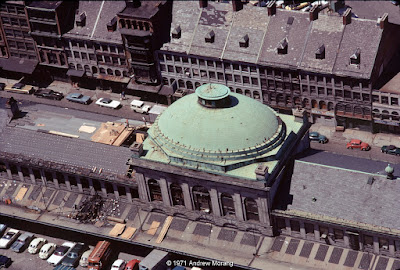 Although Government Center was developed in the the 1960s, Quincy Market retained its commercial tenants up through 1975 or 1976, continuing to be occupied by wholesale butchers, fish vendors, and green grocers. In the photographs above, you can see cars and trucks parked in front of well-used shop fronts (these are scans of Kodachrome and Agfachrome slides; click any picture to enlarge it). I remember buying a Christmas tree there one year and taking it home via the MBTA subway. A friend told me that her father, who worked on the family farm near the New Hampshire border in the mid-20th century, remembered taking vegetables by truck to the market.
In preparation for the nation's Bicentennial, the granite buildings of Quincy Market were completely renovated and leased to restaurant and retail space. Readers may recall that before the Bicentennial, historical preservation had minimal respect in the United States. Let developers condemn, pillage, and build new was the common approach to older "blighted" neighborhoods, especially if they were occupied by African Americans. Many books have been written on how corrupt mayors and city governments destroyed historical neighborhoods in the name of "progress" and payoff from developers (e.g., see Fullilove (2016) or O'Connor (1995)).

By the 1970s, respect for our historical and architectural legacy was finally developing in the United States, and the Bicentennial was a catalyst for historic preservation in many east coast cities. The Boston project became a poster child for what could be done in older cities with a bit of imagination and respect for the past. The Quincy Market redevelopment was an outstanding success, and tourists flocked to the newly revived market district (Quincy 2003). It has remained popular for four decades.

Readers who have not been to Boston: do go and enjoy a walk through history. Try the restaurants (but sadly, Durgin Park Restaurant closed in January 2019), have a craft beer, munch a bagel, and think about the sailing ships that once docked between these handsome buildings.

I've been to Boston twice and hope to return someday. Both trips I was enchanted with Quincy Market - thanks for this history lesson and the wonderful pictures!