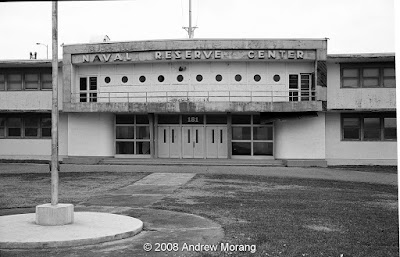 Just west of the Mississippi State Fairgrounds, there is a distinctive blue and white building at 181 Jefferson Street. The Reserve Center, with its ship-like façade, opened in 1949 as a training facility for the Navy and Marine Corps. According to the Mississippi Heritage Trust (which has a very interesting web page: http://www.mississippiheritage.com/list07.html ), the center was designed by architect John L. Turner. 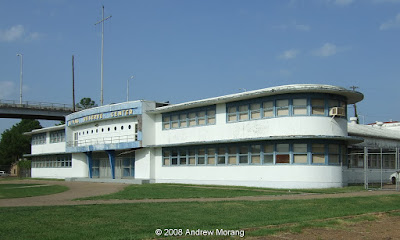 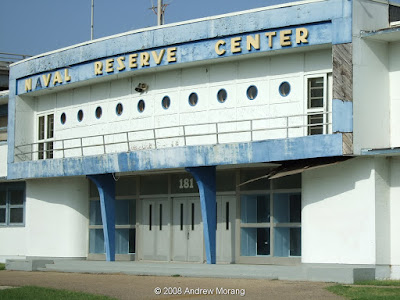 The building was last used in 2000. It belongs to the City of Jackson and appears to be deteriorating quickly. It's sad because I think the architect was very successful at linking the building's design with its purpose and evoking a sense of the sea.
Posted by Kodachromeguy at 11:41

with the right decorating, lighting, and atmosphere, this could be the new place to go for drinks or to dine (maybe a night club). being tucked close to a bridge, it makes the challenge of finding the place exciting. i don't want to see such a resourceful building gone to waste. it could definitely be apart of the mission to bring life back to downtown jackson.

What a brilliant building! Thank goodness it looks like the City of Jackson realized its significance as well.

City of Jackson sat on their arse. Haley Barbour recognized it when he was Governor.

Update: The City of Jackson has renovated the distinctive front part of the building and converted it into a records center for the Mississippi Department of Archives and History: