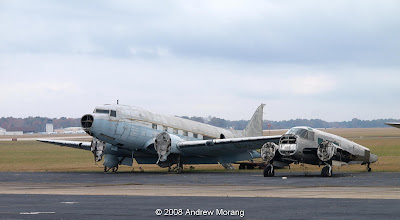 Hawkins Field, located about 3 miles northwest of the downtown business district, served as Jackson's municipal airport from 1929 until 1963, when Allen C. Thompson Field (now Jackson-Evers International Airport) opened near Pearl. The city acquired the land for an airport in 1928 and named the facility Davis Field, later renamed Hawkins. Delta Airlines operated its first passenger flights from Dallas, Texas, to Jackson, stopping in Shreveport and Monroe along the way. 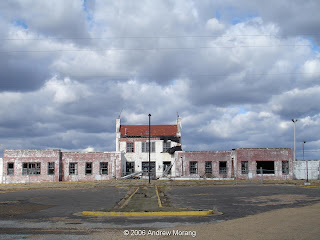 Hawkins Field played an important role during the second World War. According to Wikipedia:


"In June 1941 Hawkins Field was designated as Jackson Army Airbase. It activated on 1 June 1942 and was used by the United States Army Air Force Flying Training Command, as a basic flying training airfield. The airfield operated a contract flying school, by the Mississippi Institute of Aeronautics.

In addition, the Dutch government-in-exile, following the occupation of the Netherlands, established the Royal Netherlands Military Flying School at Hawkins Field, operating lend-lease aircraft, and training Dutch exiles as aircrews for service with Allied air forces in Europe and the Pacific. 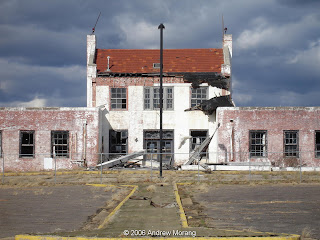 The Mississippi Heritage Trust included the old terminal on its 2001 list of most endangered places (http://www.mississippiheritage.com/list01.html). According to the Trust, "The Terminal Building at Hawkins Field in Jackson was constructed in 1936 with WPA labor and is of national importance as one of only a few relatively intact civil aviation facilities surviving from the 1930s. While not as elaborate or as large as some other airports across the country, the Terminal Building is a well-preserved example of the facilities built in smaller citiies during the decade before World War II at the dawn of commercial aviation in the United States." Sadly, the building is now abandoned and, as you can see in these photographs, deteriorating rapidly. 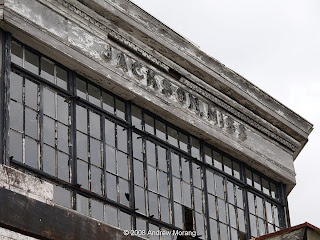 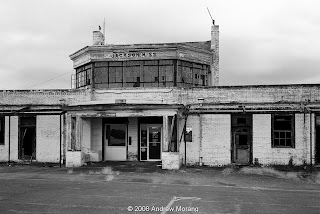 A visitor arriving via airplane would have walked across the tarmac to a modest but handsome brick building. This was the era before jetways, but it is possible that in the rain, someone would have met passengers with an umbrella. 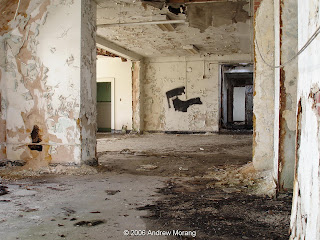 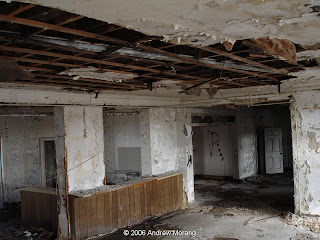 The interior now is dilapidated but was probably cheerful in its prime. I remember terminals like this. You picked up your ticket at an airline desk, or, if you already had it, showed it to an agent. There were no computers and all the tickets were hand-written. A buffet would have served coffee and snacks. Then, when it was time to board, passengers walked out on the tarmac without the bother of X-ray machines and the security bunglers that we tolerate today. Air travel still had a feeling of exclusiveness then. Gentlemen wore their suits, women were similarly dressed-up. Now anything flies, and it looks like it slept in the dumpster the night before. 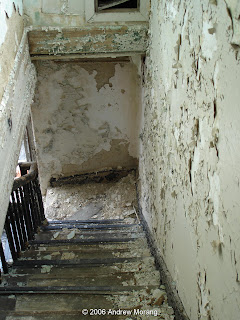 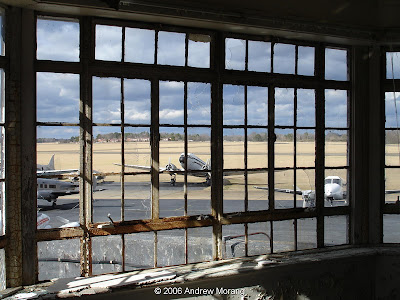 The upper floor had a cheerful glass-enclosed sitting room with a splendid view of the air field. I suppose one could wait there for a flight and relax with a cig and a coffee. I was going to say drink but I think Jackson was dry until the 1960s.

When I visited the old terminal in 2006, the gate was open at the adjacent hangar and I was free to walk around. I took the interior pictures with a small Sony DSC-W7 camera and some Kodachromes with a Nikon. When I returned in 2008, the gate was closed and I had to go to the West Ramp Road entrance to the terminal used by private aircraft. A policeman generously took me to the old terminal in his patrol car. We looked inside, but the building was so damaged that it was no longer safe to enter. 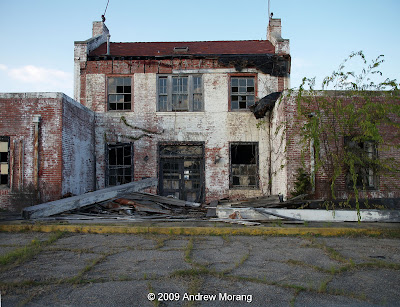 By 2009, the terminal had deteriorated significantly. 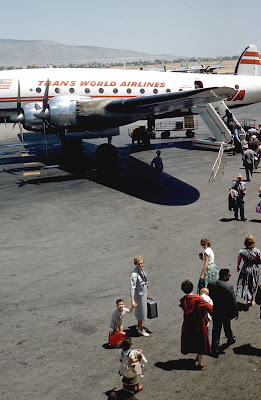 This last photograph shows what it was like to board a flight in 1956 from a terminal similar to Hawkins Field. In this case, the field is Ellinikon International Airport in Athens, Greece, and I am little guy with the red suitcase. My mother and I were on our way from Athens to Rangoon, Burma, via Beirut, Tehran, Karachi, and Bombay. It was a long trip with a hotel overnight somewhere, possibly Karachi. The plane is the magnificent Lockheed Constellation, operated by TWA. Life seemed so much more leisurely then....
Posted by Kodachromeguy at 21:12

My grandparents lived on Louisiana Ave, near there. I remember in the early 80's him taking me there to play pool on the second floor and to watch the planes. The smell was that of a bowling alley I recall. Good memories.

My dad was the airport custodian until he retired back in the '80s. I remember going to work with him on occasions.

A friend and I were going to get some photos of this location yesterday for a photography project, but ran into a surprise. A company has taken on the task of fully restoring the terminal. In its current state, being yesterday, the entire outer stucture appears to have been repaired, the windows and doors have been boarded up for now, and the entire building has been whitewashed. We could not get close to it because it is currently fully surrounded by high security fencing to prevent outsider access. Due to the progress that is being made and the part of town that it is located in, this was a wise decision. I hope that the project doesnt get scrapped and that we will be able to eventually be able to see the inside of the terminal in its former glory.

I was blessed with the ability to remember a few things from my infancy. I recall going to eat at a restaurant with my parents that I believe was on an upper level at the old airport. I believe the restaurant may have been named Cicero's. I was between 1 and 3 years of age at the time.