Decay within sight of the State Capitol, Jackson, Mississippi 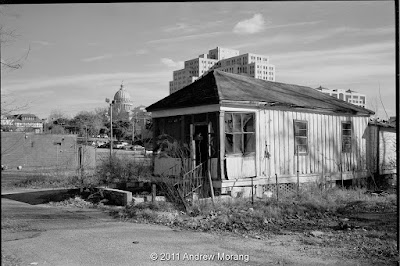 I have always been surprised how a run-down neighborhood can be only a few blocks away from a major commercial or government area. I first encountered this in Houston, where slum houses in the Fourth Ward had a view of the glamorous glass office buildings of downtown. I had not encountered this type of urban disparity in European or New England cities. Jackson fits the pattern: just west of the state capitol, slum neighborhoods are rough and being abandoned or torched. 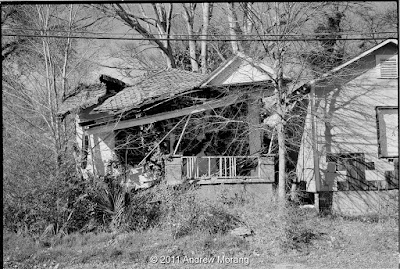 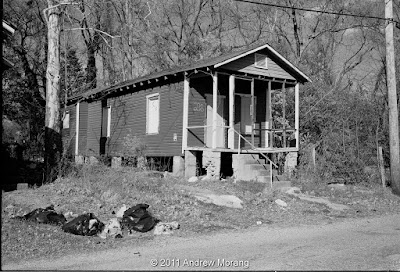 George Street is (or was) a mess. I have not been back since I took these photographs in 2011, and many of these shotgun shacks have likely been demolished. 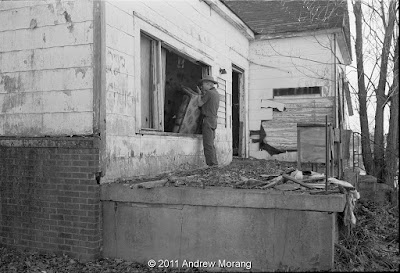 East Church Street, a block north of George street, was just as dilapidated. This is a photographer friend checking an abandoned house. 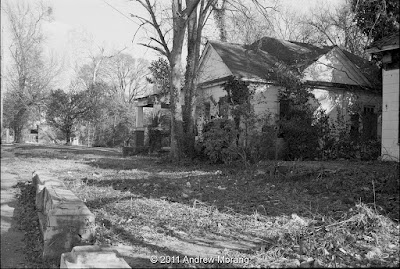 These were once nice residential neighborhoods. Unfortunately, I am not surprised they were allowed to decay. Jackson is in rough shape, and you readers know many of the reasons (I won't list them because this is not a political blog). When the houses are razed, the property no longer serves as a tax source. Less tax revenue means city services, infrastructure, and schools deteriorate, which leads to more people abandoning their properties and moving to more prosperous communities. The blight spirals - the race to the bottom that we see in so many American cities. It is absolutely disgusting.

Photographs taken on Kodak Panatomic-X film with a Fuji GW690II rangefinder camera (the "Texas Leica"). I developed the film in Agfa Rodinal developer at 1:50 dilution and scanned the negatives with a Minolta Dimage Scan Multi medium format scanner.
Posted by Kodachromeguy at 10:46